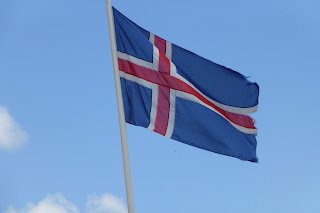 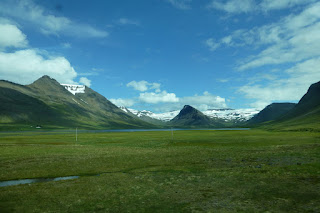 We set out from the small port town of Isafjordur on Iceland’s northwest coast, just below the Arctic Circle. The sun was out; the glaciers were sparkling, white against black. Waterfalls gushed down the steep hillsides. As we moved inland an amazing sight came into view – vast spills of purple lupines covered the grassy hillsides. The flowers are an invasive species but one that created dreamy vistas in all directions. 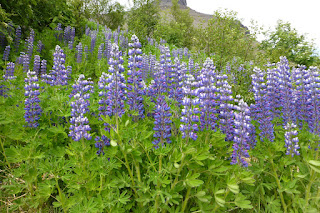 We were on tour that took us on a visit to what must be one of the more northerly gardens in the world: Skrudur, the first Icelandic botanical garden. The small walled patch of trees and flowers was planted by a priest who was assigned to the settlement of Nupur in the early 1900s. He and his wife came from even farther north and brought with them an enthusiasm for growing vegetables and a desire to teach botany and horticulture.
A small chapel and a collection of buildings, now used for a simple hotel and for live-in language courses, marked Nupur. Skrudur, a few minutes farther along, rests between the narrow Dyrafjordur fjord and a treeless plain at the base of ice-capped mountains.  If we would have headed out the fjord toward the open sea we would have reached Greenland, a cold thought on a warm day. 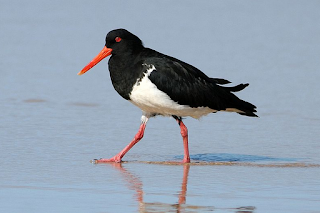 Near the shore Oystercatchers, with their red beaks, eyes and legs framing black and white bodies, walked along looking for lunch. As we walked up the path to the garden gate another type of shorebird, unknown to us, was startled from nests in the grasses. They flew around us in distress, their keening calls lending an eerie note to the scene. 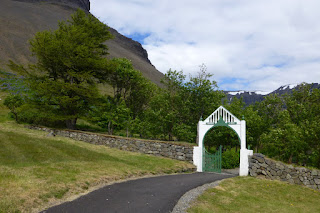 The gate’s lintel bore the date, 1909, the year the garden was officially opened. Passing through the grass-topped stone wall, we entered into a small enchanted garden, cold thoughts forgotten. Paths led us by narrow flower beds and a central fountain bubbling away. An unseen gardener had left a hose dripping creating a few puddles in the beds. Beyond the flowers was a greensward dotted with trees planted to prove that it was possible to get them to survive in the hostile climate where forest cannot survive. The trees were labeled: Sycamore, Birch, Larch, Rowan, Elm and Spruce. None had the size I associate with more temperate climes, a testament to their struggle. 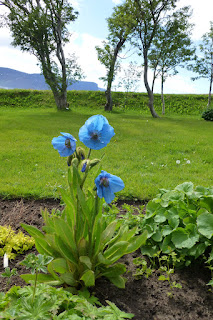 The unexpected sight of the flowers in an otherwise black, brown, green and white landscape delighted the eye. Set among the campanula, saxifrage, daisies and pansies were brilliant red, yellow and blue poppies all flourishing in the eternal daylight of
mid-summer. 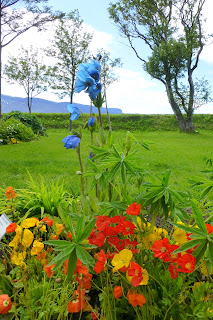 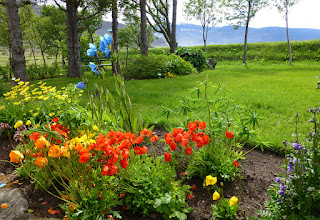 A sod-covered storage shed outside the wall on the far side of the garden was near two whalebones erected as an arch over a side entrance to the garden. They formed a parenthesis around the vista into the gardens and outward toward the mountains.  A memorial to the harsh life the Icelanders have endured between land and water. 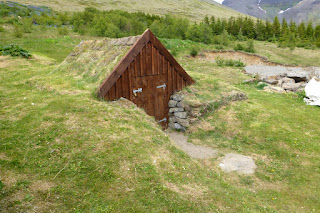 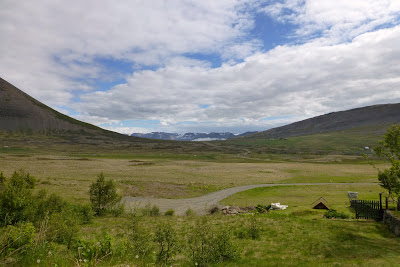 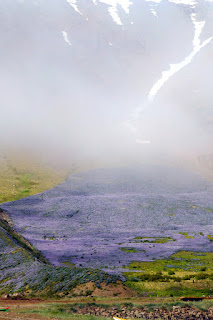 When it was time to return to Isafjordur we were treated to a mystical sight: Hovering above an immense field of lupine was a wisp of cloud. Above the moisture a mountain peak with its ice presided over the scene as if we were in Shangri-La.