By
judithworks
on
DESERT SONG – Part II, Pioneer Town and Joshua Trees
We’d enjoyed some of the cultural opportunities of the area and we’re ready to explore the desert (i.e. the area that hasn’t been turned into towns and golf courses.)At the top of our list was the Joshua Tree National Park which covers areas of the Mojave Desert on the western side and the Colorado Desert on the east.
We headed out toward the town of Joshua Tree, one of the park’s entrances but instead of turning into the park, we made a detour for more “culture”not far from the town of Yucca Valley—an exploration of Pioneertown, purportedly founded by Roy Rogers and Gene Autry in the 1940s as a movie set for their shoot-em ups.

At that time about the only amenity in the area was a beat-up saloon where the stars and extras could belly-up after hours. After some 50 films, the movie business moved on but the cantina remained to serve the occasional thirsty traveler. In 1972 it morphed into an outlaw biker bar; ten years later the owners turned it over to their son-in-law and daughter: Pappy and Harriet. They built their namesake into a destination restaurant and music venue hosting such luminaries as Rufus Wainwright. Pappy and Harriet’s is now worthy of entries in Wikipedia and Atlas Obscura.

Drawn by the honky-tonk atmosphere, we decided on an early lunch shared with a few gray-ponytailed old bikers and dullards like us. I couldn’t help picturing Roy and Gene ordering a salad of organic kale, vegetarian chili and a glass of Malbec after a hard day on the set while Trigger and Champion had their noses in feedbags at the hitching post outside.
Inside, the stage was set up but it was much too early for music but the quirky décor extended to the women’s restroom.

It was time to move on to Joshua Tree, a natural wonder like no other I’ve seen. Home to wildlife, pinon pines, junipers, scrub oak, yucca and cactus, the real attractions are the Joshua trees and the weathered granite boulders thrust up eons ago as a result of volcanic activity. Rock climbers and photographers are in seventh heaven.

The Joshua trees were named by Mormon settlers in the 1800s because the wild arms seemed to them to be Moses’ assistant, Joshua, raising his hands in praise to God. They aren’t mentioned in the Bible and don’t grow naturally in Israel. And they aren’t trees either but rather a variety of yucca that can grow to 40 feet. They grow slowly, an inch a year, and it is heartbreaking to see the vandalism done to the trees and other wonders by those who have taken advantage of the closure of the park in the fight over the budget.

According to rangers, it could take up to three hundred years for nature to repair the damage. I ask myself why people behave so badly, but there’s no rational answer.

The park is nearly 793,000 acres of which more than 80 percent is designated wilderness. At the entrance we noted posters of missing hikers and it was easy to imagine a tragedy from extreme heat and night chill, or a fall in some desolate canyon.

Given the time we had available we did most of our “exploring” near the road but did hike to Barker Dam and Hidden Valley used by cattle rustlers in the early days.

I was surprised how many people joined us on the path. Infants, grandparents, couples and solo walkers all determined to get in one more experience before the area closed for the day because there aren’t campgrounds there —in fact our map only showed eight camps in the entire park.

The sun was low in the sky by the time we returned to our car to descend to the Coachella Valley and plan another day of food and adventure: a jeep tour on the San Andreas Fault and an investigation of the sex lives of dates (sorry: it’s about the kind that grow on palm trees.) 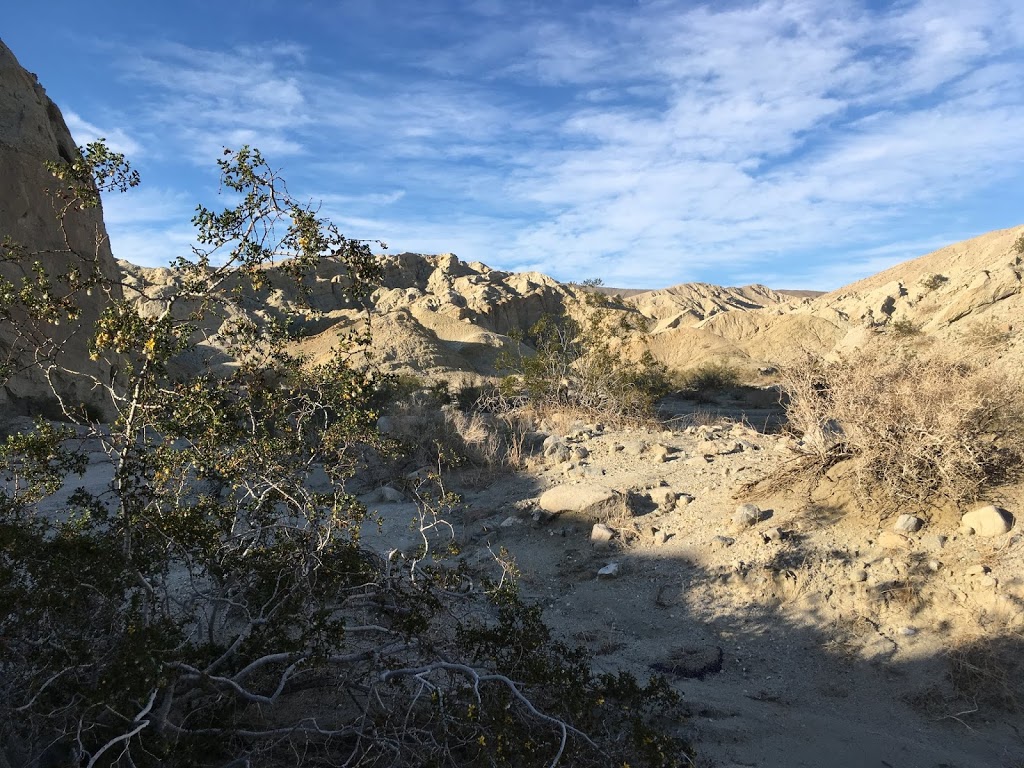