Good Food and Wine and a Little Light Exercise

Similar words were written by a 19th Century Italian writer. It’s my motto for travel when one is beyond life’s midpoint. Adventure travel no longer has the appeal it once had – now it’s the prospect of a nice hotel or a comfortable cruise ship that compels me to drag out the suitcases and head off to someplace interesting.

Italy is my (or, I should say, our) usual goal but there are so many places to see my husband and I only get there every other year, not often enough but what can you do when there are still over a hundred countries that haven’t provided us even a glimpse of their history, people and places.

Italy is on the horizon now but our last big trip was this spring from Martinique to French Guiana on a small French ship Le Levant which I just read has been sold to the company that operates the Paul Gauguin, a luxury small ship sailing the blue Tahitian waters. (That’s another story.)

It’s a long haul from Seattle to Martinique. We stopped in San Juan at El Convento hotel in the old town before boarding the small plane for Fort de France. Not so far away a new hotel awaited us: La Suite Villa, a sweet French Caribbean perch with some of the best food I have ever eaten served in their restaurant, Le Zandoli. The owners, French expatriates, are interested in both the local and international art scene. A painter from Quebec, Niko, arrived for an exhibition while we were there. She specializes in work featuring women’s faces.

Too soon, our little ship awaited us – one that was usually put to work on expeditions up the Amazon or Orinoco, not fancy but welcoming. Shortly after we boarded up went the anchor; an hour later down went the anchor: we were so close to the first stop, St. Lucia, our captain waited ’till daylight to approach. By this time we realized that we and 3 Brits were the only non-French aboard. High school French was dredged out of my mind in a hurry: merci, tres bien and vin rouge became our lingua franca. The polite passengers did their best to communicate with us although most of the crew could interpret my gestures and ghastly accent. We didn’t starve.

The first two stops were St. Lucia, a beautiful volcanic island with rich visiting yachtsmen and women in the harbors and a poor populace still suffering from the effects of a 2010 hurricane, followed by a picnic on a deserted island in the Tobago Cays, a perfect picture of the idyllic Caribbean. Hot sun, white sand, blue water, a few sails in the distance, champagne and more lobster than anyone could eat. 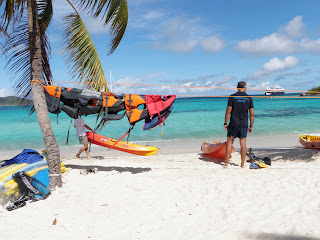 All very nice but our attraction was the next three stops. First came Grenada, famous for Reagan’s invasion in 1983 to overthrow the People’s Revolutionary Army who were conducting a reign of terror. We always considered the invasion somewhat of a joke but everyone we spoke about the island’s history of changing hands between French and English rule followed by a rocky road to independence was grateful that tyrants were overthrown. Our guide was a man (I think) of Indian background. He was willowy and flashed his beautiful long red-lacquered nails as he drove us around the island. His companion was a genial rasta wearing Ethiopian jewelry and a green, yellow and red knit cap over his dreadlocks. He told us what a wonderful man Haile Selassie had been (His remarks didn’t comport with what I had seen in Addis but then to each his own.). We saw a lot of lush vegetation and luxury resorts but a hurricane in 2004 wiped out most of the nutmeg trees and the economic downturn has devastated the tourism industry, the only real sources of income on what should by an idyllic island.

In the evening we boarded our ship with packages of nutmeg, mace and chocolate nibs – souvenirs of the Spice Island. While we danced to a steel band I nibbled the nibs – and went off on a high that lasted the entire night – who knew they were so powerful. The concert over, we departed on the way to Guyana.The best (well, the most interesting) was yet to come. Stay tuned!