Grey and green became the predominant color as our little ship left sunny Grenada for the north coast of South America. We sailed a short way up the Demerara River bordered by low growing jungle, a few homes on stilts and rusting hulks drawn up on the water’s edge. We docked in Georgetown, Guyana. 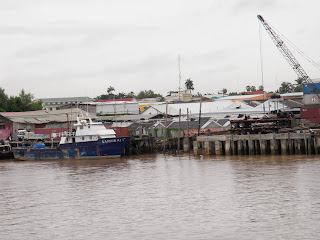 The only thing I knew about the country was the horrifying episode where the Reverend Jim Jones passed out poisoned fruit drink to his followers resulting in 918 ghastly deaths. The toll included 300 children and one Congressman who was shot when he came to investigate the state of the Americans held captive in the Peoples’ Temple settlement deep in the trackless jungle. 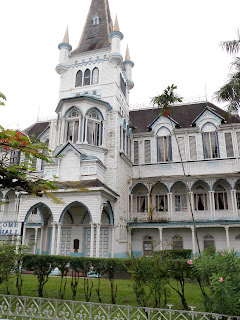 The heavy clouds opened up as we started towards two small vans awaiting us – one for the French passengers and another for us and the French who wanted to practice their English. Off to town we went – a collection of mostly dilapidated buildings stained with mold and potholed roads filled with puddles interspersed with a few beautifully kept Victorian-era wooden buildings with boxes for ice below the windows to cool the tender colonialists as they administered the country. 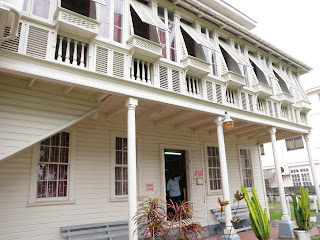 Remains of a rail line torn up in one of the numerous revolutions, a statue of Queen Victoria with her nose shot off – casualty of another time of turmoil were pointed out. A large meeting hall where one of the dictators hosted a conference of non-aligned nations many years ago was on the itinerary. Not exactly gripping but reflective of the country’s never-ending travails. 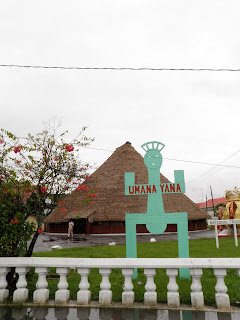 We passed by the Stabroek Market built of iron and steel in 1881 when the British were ascendant. I was ready to hop out and do some shopping. “NO – too dangerous,” said the guide as the van sped on to our next destination. Then I looked out the window beside me to see an outrider in full body armor on a motorcycle next to the van with army vehicles in front and behind. Apparently Guyana isn’t ready for tourist prime time.

We were finally let loose to visit the musty natural history museum filled with stuffed animals and birds that had lost their fur and feathers years ago, all the while watched by guards. I wasn’t sure if they were protecting us or the dusty exhibits. The tiny history museum was more interesting with its few remnants of Amerindian life mostly destroyed by first the Dutch and then the British over a period of about 300 years.

Next was the the most famous relic of the British era, the St. George’s Anglican Cathedral, supposedly the largest wooden building in: either the country, the continent or the world, depending on who was telling the story. 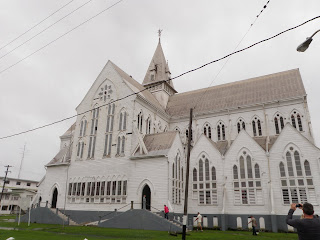 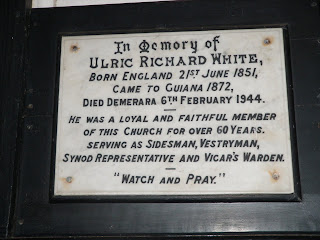 It was indeed  large, airy and empty with lovely stained glass windows unfortunately in disrepair and the wood flying buttresses looking like they needed to be buttressed themselves. The plaques on the walls memorialised those who came from England and who often died of tropical diseases in the service of the empire. One cluster of plaques was placed next to the EXIT sign – a fitting reminder of life in this tropical former outpost of Europe.

Our last stop was the tropical gardens, in reality a large open space with a small pond holding a few manatee who slowly came to see if we would feed them handfuls of grass. We did of course. Their faces bore a startling resemblance to the business end of our vacuum cleaner.

The tour over we headed for the dock. Reporters were waiting: it was so unusual to have anyone touring we were interviewed and photographed. Maybe we gave a few laughs to the populace who happened to pick up the paper that evening.

Our motto is good food and wine and a little light exercise. We accomplished the latter in town and enjoyed the French food and wine back on the ship as we floated toward Suriname.

Book Review: The Pursuit of Italy