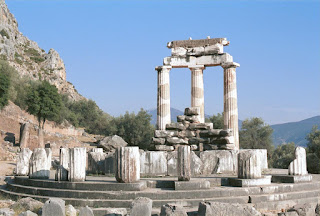 Oracles & sibyls, those fascinating forecasters, were popular with ancient Greeks and Romans who wanted to learn their fates. I’m never quite clear on the difference between the two but my classical dictionary says that an oracle transmits the response of a god to a question asked by a worshipper. A sibyl was a female prophet who  didn’t need a god to get involved in the process.
One of the most memorable days I ever spent immersed in the ancient world was a visit to Delphi, dedicated to Apollo and home of the Delphic Oracle, called Pythia, by tradition a local woman over age 50. The area was a center of worship before the first millennium BC and was still in operation in 385 AD when Emperor Theodosius abolished it. The site, not far from Athens, retains an aura of mystery because of the beauty of its surroundings and the evocative ruins of temples in the Sacred Precinct.  This most famous shrine to Apollo rests on Mount Parnassus’ steep slopes. The location was considered to be the center of the earth and was therefore sacred to the god as well as home to the muses, personifications of poetry, music and learning. 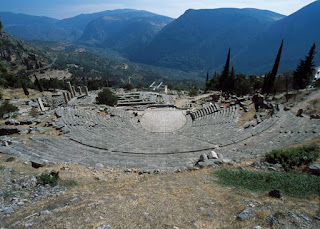 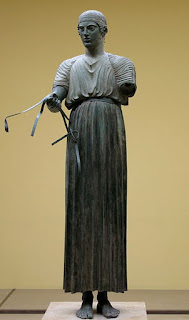 After wandering around the ruins filled with temples, a theatre, gymnasium, and a museum where the exquisite bronze statue of a charioteer stares solemnly into the distance with his glass eyes, I sat among the ruins in warm, hazy air gazing on endless silver-green olive groves punctuated with whorled cypress trees all sloping down the hills. The age of Apollo seemed to return and it was easy to visualize the streams of worshippers bringing gifts, watching plays and cheering athletic competitions. But perhaps I was only breathing the faint fumes still wafting in the breeze from a chasm where the oracle sat on a tripod speaking in Apollo’s name. It is said that she chewed on laurel leaves and breathed the fumes from the rotting corpse of a giant snake, the Python, for inspiration. More prosaically, the fumes are thought to be ethylene which is known to produce out of body experiences. Whatever the genesis of her trance she provided devotees with answers to religious, moral and political problems. Ever curious about the future, I asked what my fate would be. But there was no response to my entreaties.
* * *

Cumae, an ancient temple complex similar to Delphi but only a couple of hours south of Rome, was established by the Greeks in the 8th Century BC. Not much remains except the cave where the Cumaen Sibyl spun out her prophecies. She must have been a fearful sight if we can believe Michelangelo. Of the five sibyls depicted in the Sistine Chapel, she’s the ugly one, rendered with aged and masculine features and upper body and arms like those of a weightlifter. The sibyl was reputed to have shunned sex – thus Michelangelo painted her legs and feet primly poised together as she intently studies her book. Her fame rests on offering nine books of prophecies to an Etruscan king of Rome in the sixth century BC. He declined to buy them because of the cost. She burned three and offered the remainder to the king at the same price. He refused again whereupon she burnt three more. He gave in and purchased the last three at full original price. They were kept in the Temple of Jupiter on the Capitoline Hill in Rome to be consulted in emergencies, not that in the end they did any good as both they and the Roman Empire were destroyed. 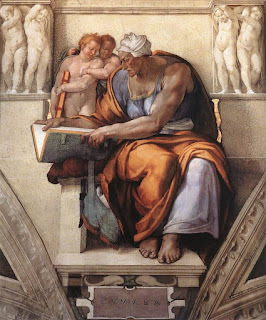 When she was “alive” she sat at the end of a 145 foot long trapezoidal tunnel cut through solid rock. The tunnel and the surrounding remains are located not far from the volcanic and sulfurous Phlegrean Fields as well as Lake Avernus, considered by the ancients to be an entrance to Hades.

Virgil described the sybil’s fearsome power: “Through the amplification of her hollow vaults, the sibyl cast her warnings, riddles confused with truth.” Despite her powers she came to a peculiar end. She asked Apollo to let her live as long as the number of grains of sand she held in her hand. Apollo granted her wish but because she forgot to ask for enduring youth she slowly withered away, ending up in a small jar. In the end only her voice was left, and that, too, is long gone thus preventing me from asking her any questions either. 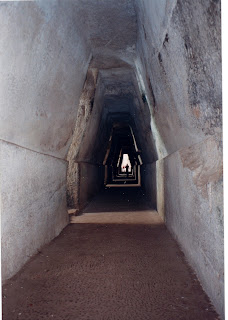 The tunnel had a few openings for light cut into the cliff facing the sea. My husband and I stumbled along in the dimness. By the time we reached her cave at the end it was easy to think of the ancients quivering while awaiting some word on the future as she wrote their destiny in riddles confused with truth. The mood was unsettling and we didn’t linger, anxious to return to the emotionally cleansing sunlight. 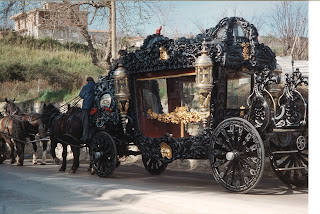 When we emerged into the brilliance after one visit we were suddenly transported to a relic of the 18th   century. A funeral cortege was passing by. In the lead was an enormous ornately carved Baroque black wooden coach drawn by six black horses with black plumes on their bridles. The coach was glass sided with two gold and silver lanterns, each at least six feet tall, a gold railing across the glass and a gold cockle shell adorning each of the lower sides. The wheel spokes were as elaborately carved as the coach body. On top were two screened domes to dispel the odor of decay. A coffin heaped with flowers rested on a red velvet bier inside the coach. Incongruously, the driver and his helper sitting on the carved and painted high seat were wearing ordinary slacks and windbreakers. No bewigged footman in sight. A dozen cars followed the coach as it slowly made its way along the road. The cars were hung with funeral wreaths so big that they were nearly buried in flowers. Were they headed to the cemetery or to Lake Avernus and the underworld to see the deceased off on his journey to an unknown destiny?

Good food & Wine and Not Much Exercise 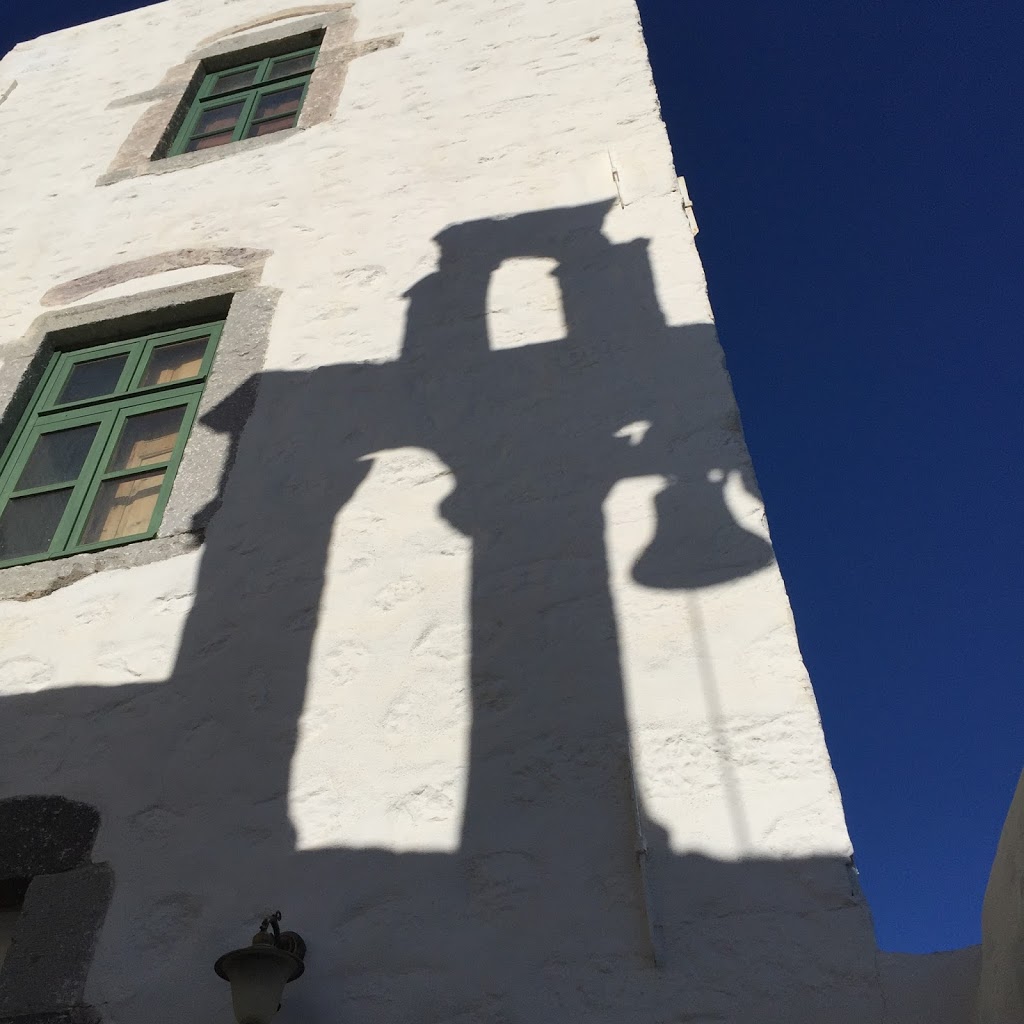 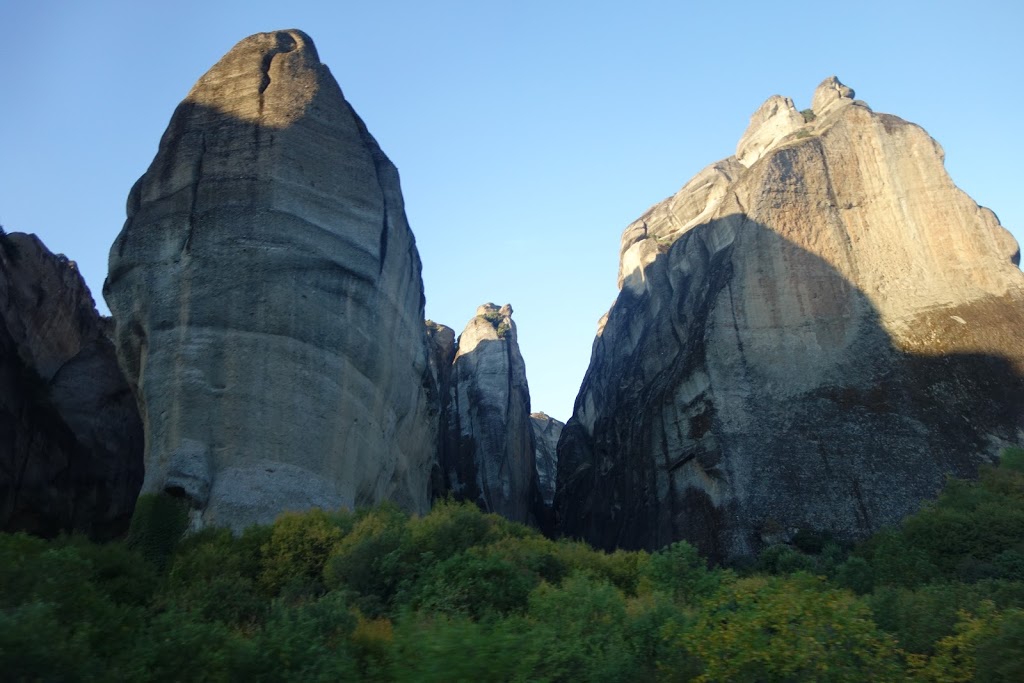