By
judithworks
on
THE ENGLISH CEMETERY IN ROME
Are you looking for someplace quiet, someplace restful, someplace away from the noise of Rome? The so-called English Cemetery is an excellent location for contemplation. Not only are the monuments interesting but the landscaping is a delight. Spring brings wisteria, daisies, iris and violets; summer is for lavender, plumbago, verbena and geraniums; fall comes with ripening pomegranates, lemons and oranges. Winter color includes the citrus, camellias and small pink wild cyclamens mixed with the larger and brighter cultivated varieties.  Presiding over all are the cypresses, so typical of Italian cemeteries, and umbrella pines. And of course, cats who live in a refuge at the base of the adjoining Pyramid of Cestius. 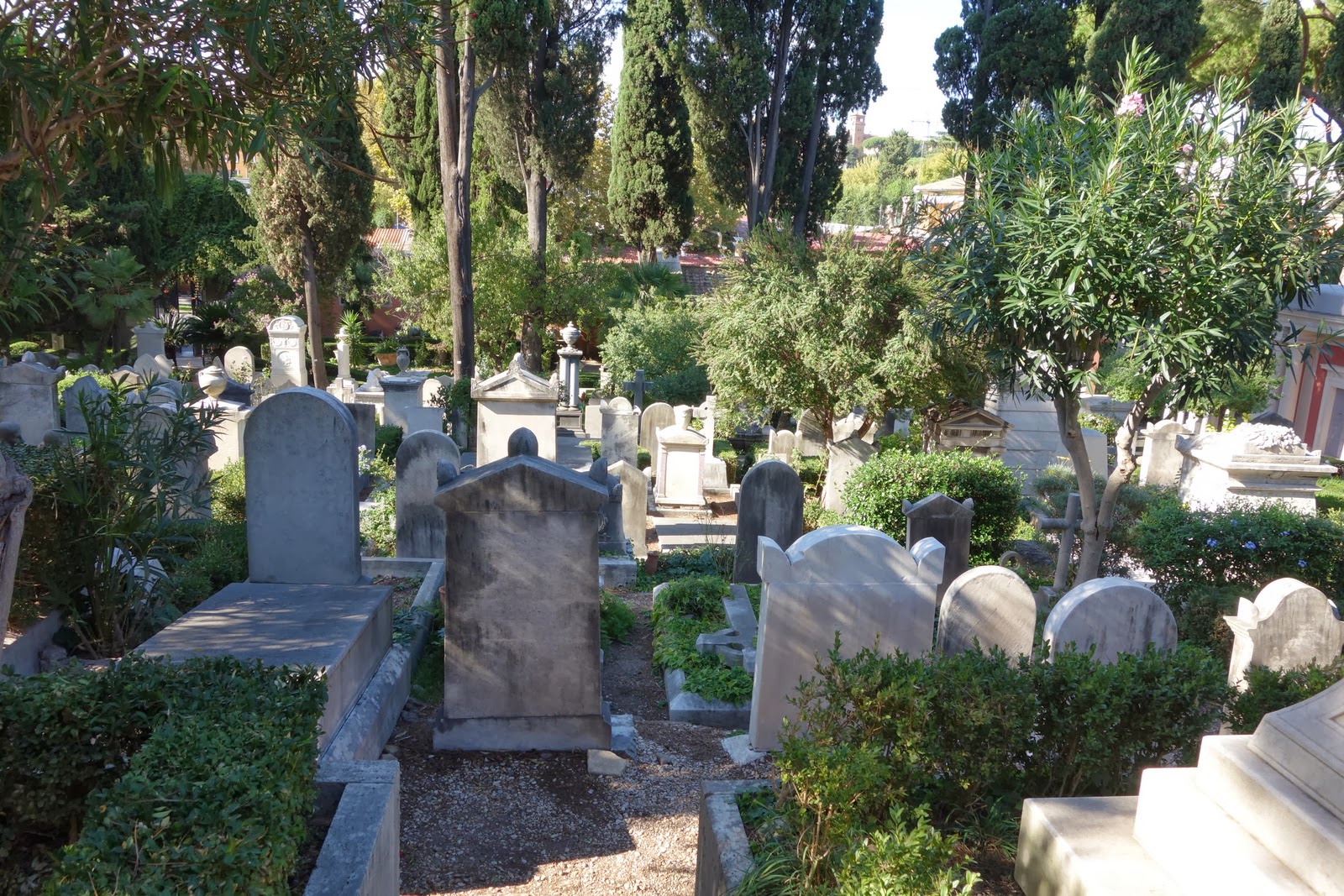 The real name of the resting place of so many is The Non-Catholic Cemetery, and although it does contain the dust of many 18th Century Englishmen who fell while taking their Grand Tour, there are tomb inscriptions in fifteen languages representing about every known non-Catholic religion and the non-religion of Antonio Gramsci, the founder of Italian Communism. The oldest tomb is that of an Oxford graduate who was buried in 1738. Among other interesting bones are those of Goethe’s only son, designer Irene Galatzine who (unfortunately) gave women palazzo pants, and Richard Henry Dana, Jr. who wrote Two Years Before the Mast. Henry James decided that Daisy Miller should be “buried” here. 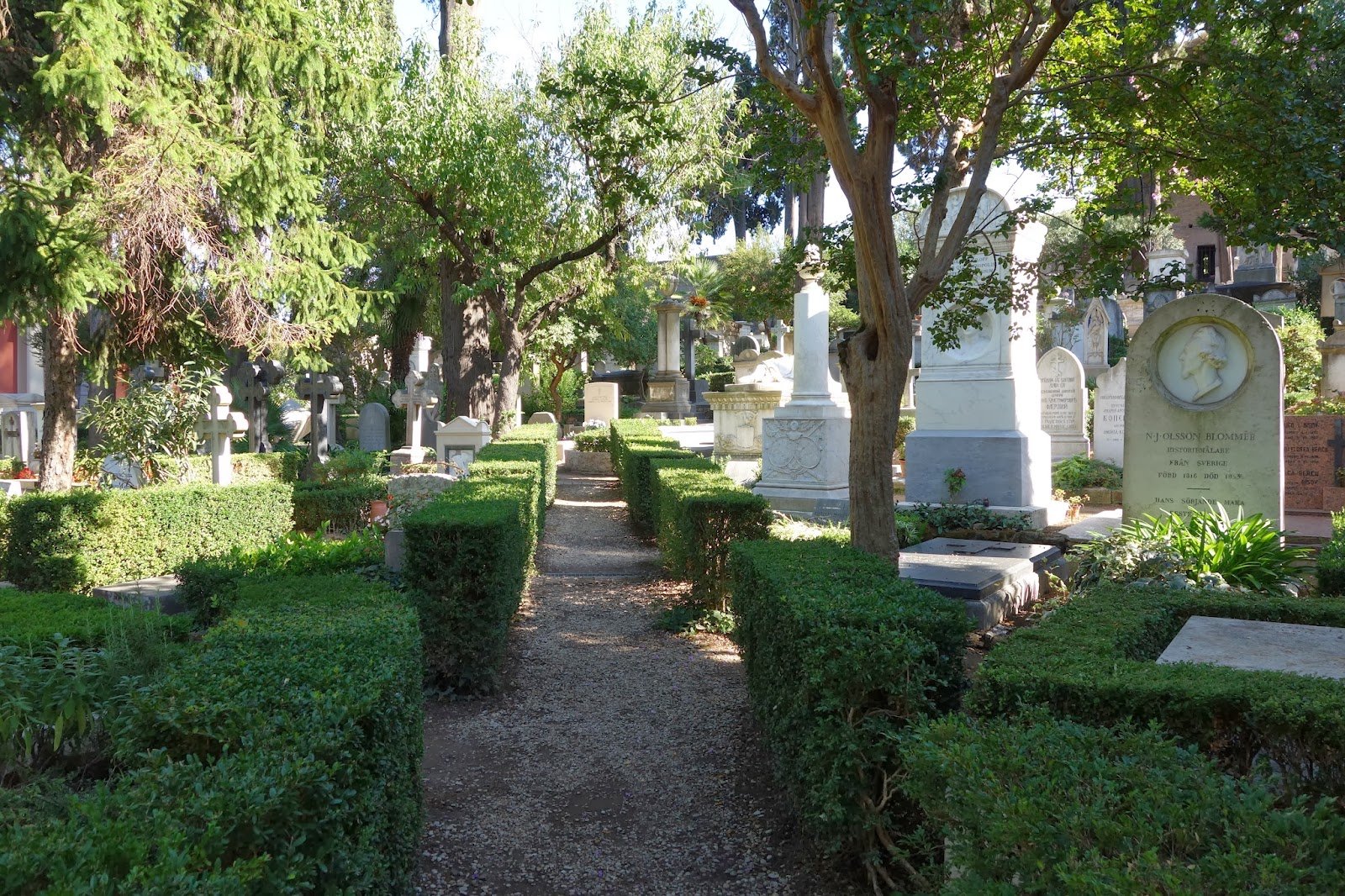 The 400 tombs are in narrow strip of land abutting the ancient pyramid, the Aurelian Wall, and the busy Via Ostiense – the road to St. Paul’s Outside the Walls and the coast. A metro stop, Piramide, is only a few blocks away from the cemetery’s entrance on Via Caio Cestio (named for the pyramid’s builder). Some are simple flat stones and others have carefully carved sculptures. 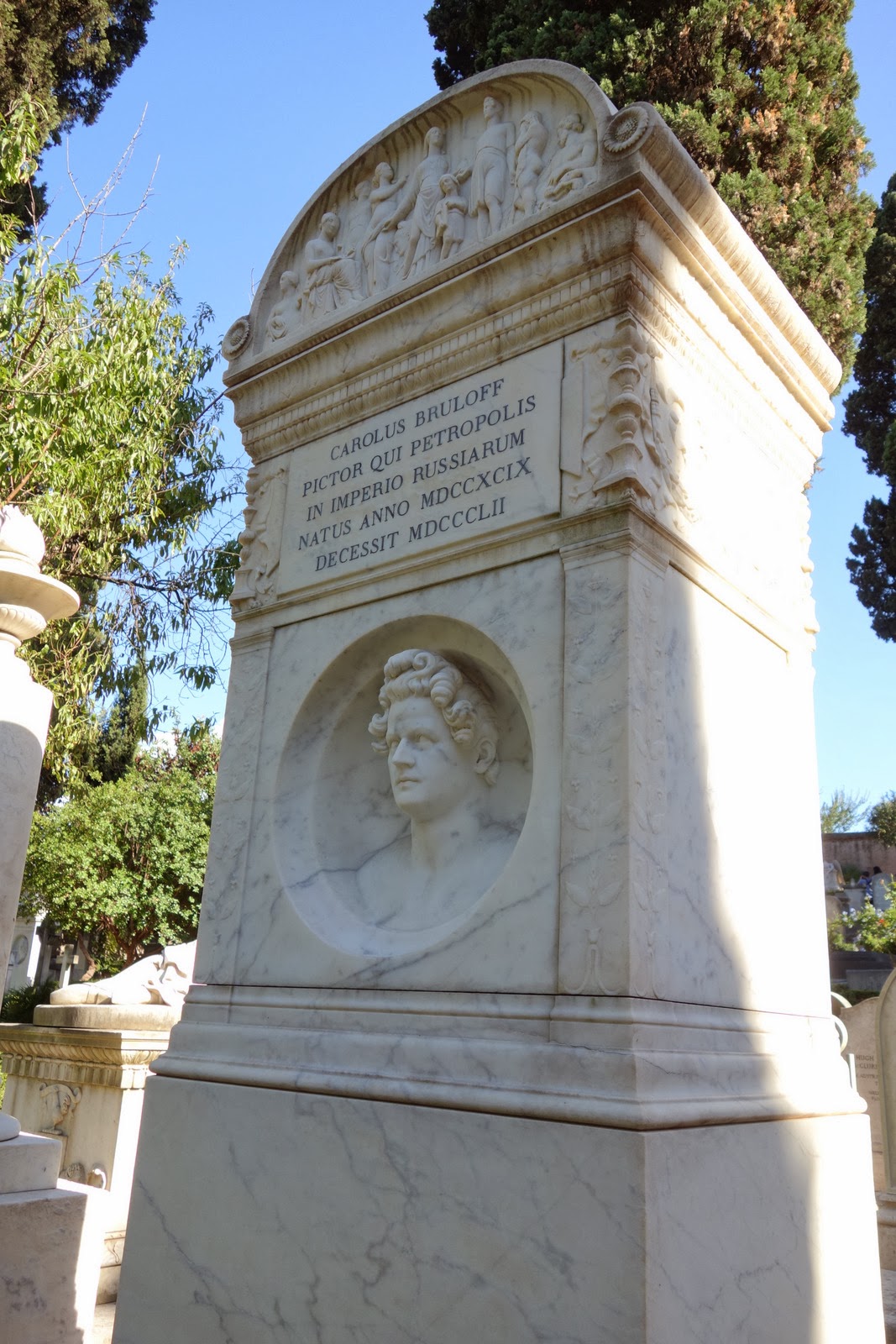 The most famous memorials are to Keats and Shelly.

Keats, died at age 25 of tuberculosis in a villa near the Spanish Steps (now a museum).  His  last request was to be placed under a tombstone bearing no name or date, only the words, “Here lies One whose Name was writ in Water.” But the stone, which under a relief of a lyre with broken strings, also includes the epitaph:

“This Grave / contains all that was Mortal / of a / Young English Poet / Who / on his Death Bed, in the Bitterness of his Heart / at the Malicious Power of his Enemies / Desired / these Words to be / engraven on his Tomb Stone: / Here lies One / Whose Name was writ in Water. 24 February 1821″ 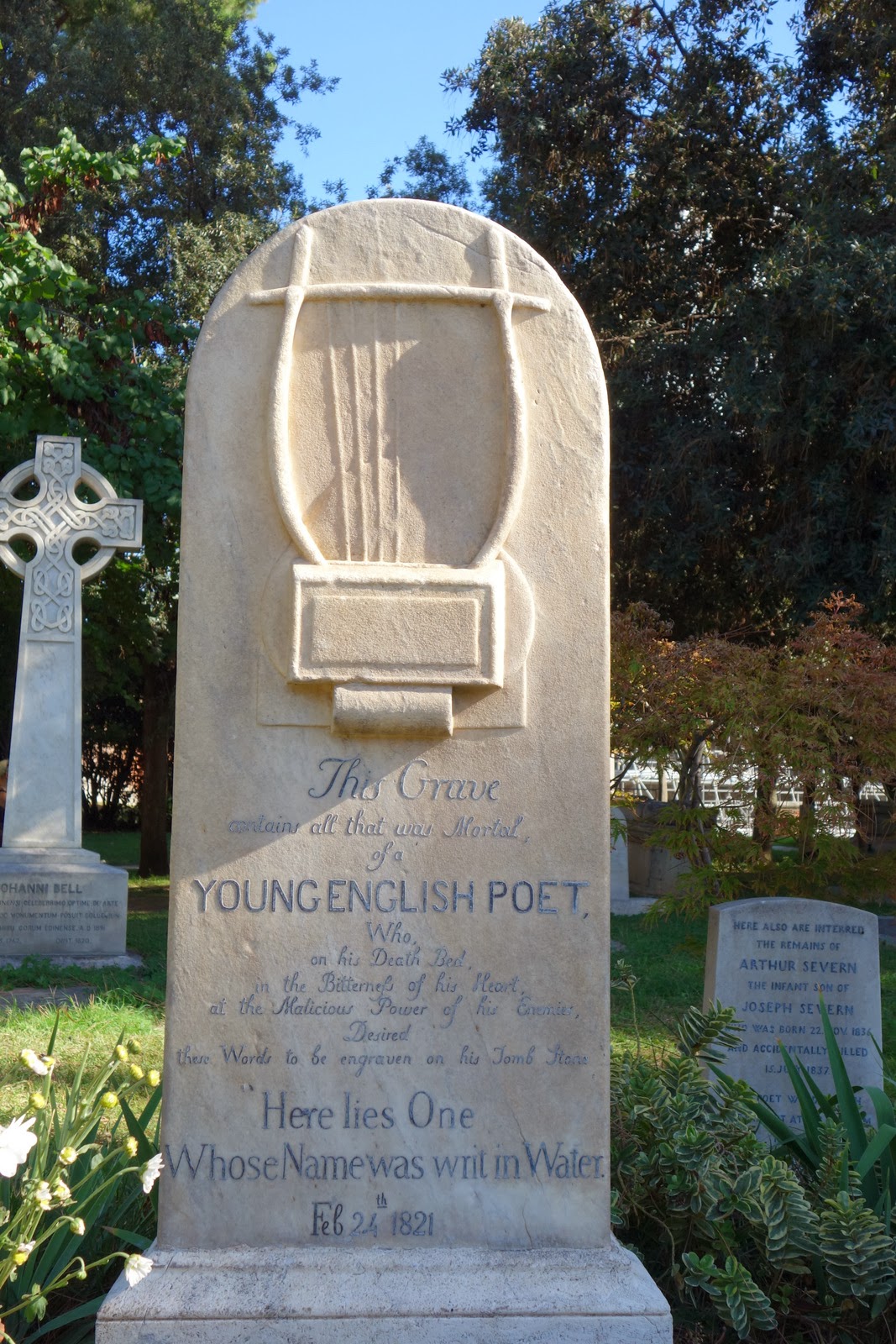 The tomb is in an open grassy area filled with daisies in the spring. It is easy to find because often worshippers drape themselves over the headstone in an attempt to absorb the poet’s gift.
Shelley drowned in 1822 in a mysterious sailing accident near the lovely town of Lerici on the Italian coast south of Genoa. He was cremated on the beach where his body washed ashore, the ashes interred in the crowded main area of the cemetery next to the ancient Aurelian Wall. The inscription reads Cor Cordium (“Heart of Hearts”), and in reference to his death at sea, a few lines of “Ariel’s Song” from Shakespeare‘s The Tempest: “Nothing of him that doth fade / But doth suffer a sea-change / Into something rich and strange.” 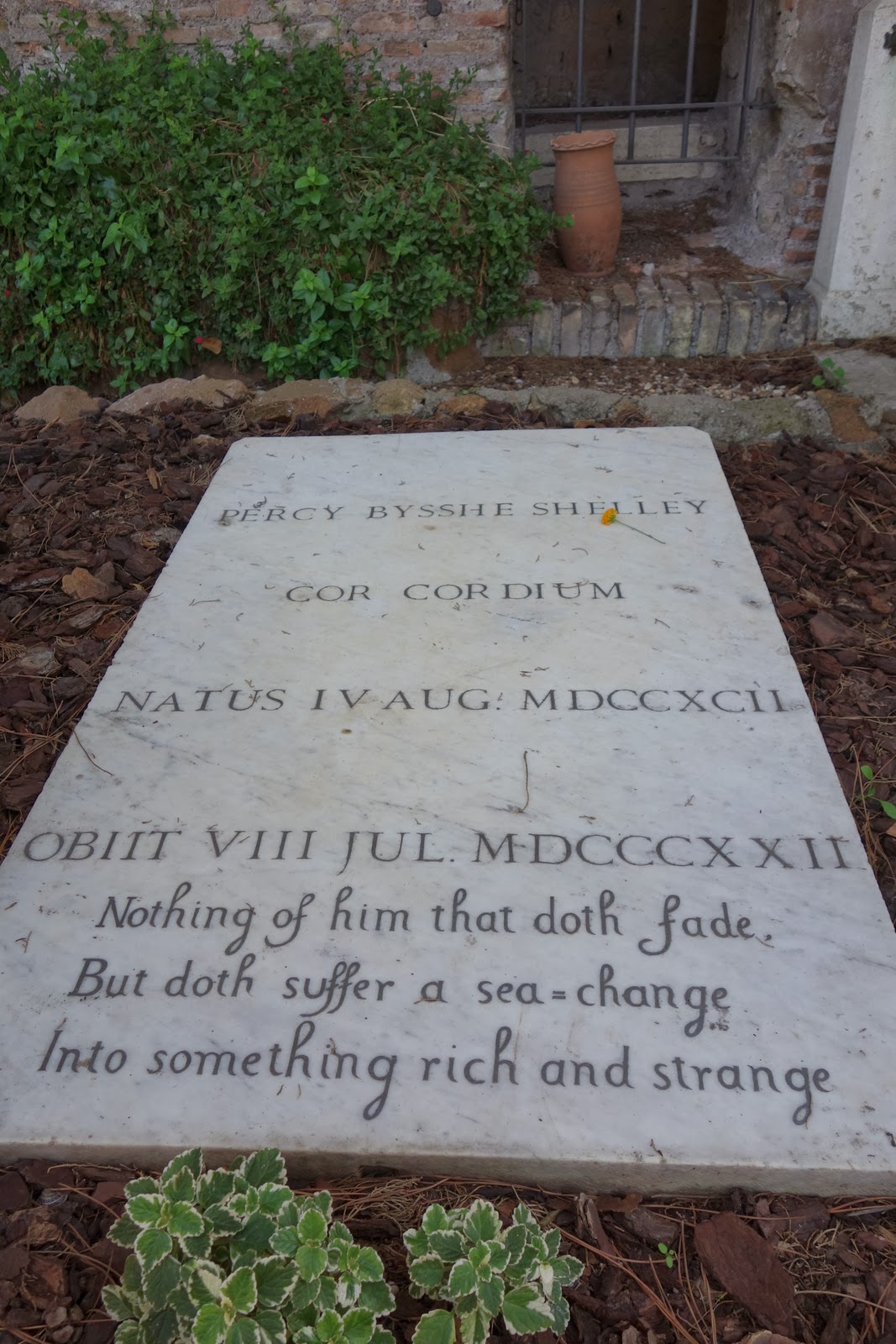 These two tombs are of historical interest but there are many others interesting for their sculpture.
Who can resist that of Devereux Plantagenet Cockburn who was put to rest in 1850? For that matter, who can resist his name? He lounges without a care, languidly holding a book with his faithful dog  beside him. 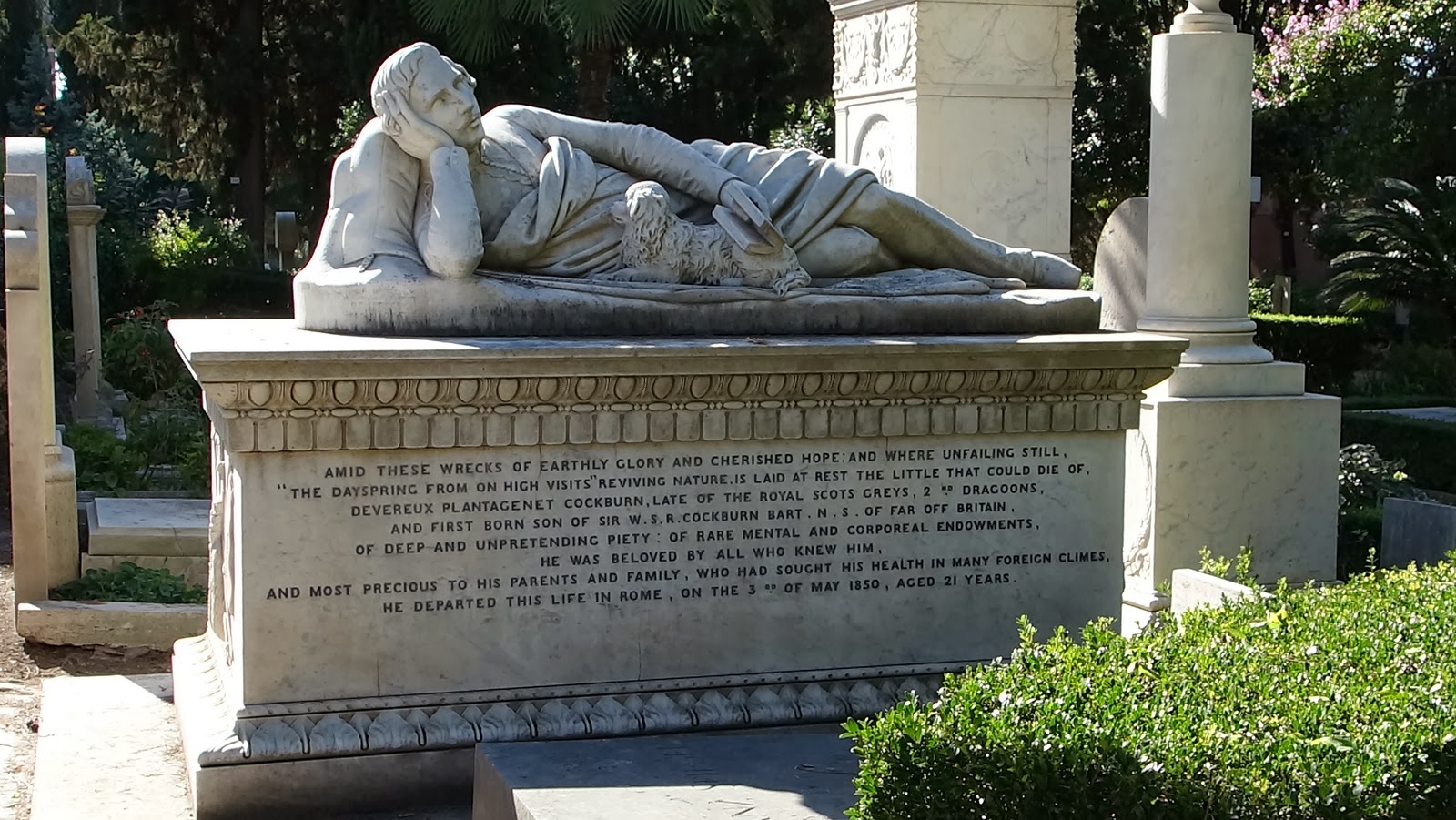 And then there is the Angel of Grief. If you’re into drooping angels, this will be your finest experience. It was sculpted by William Wetmore Story for his wife in 1894. He was the most prominent of the many American sculptors in Rome, where he lived for 40 years. 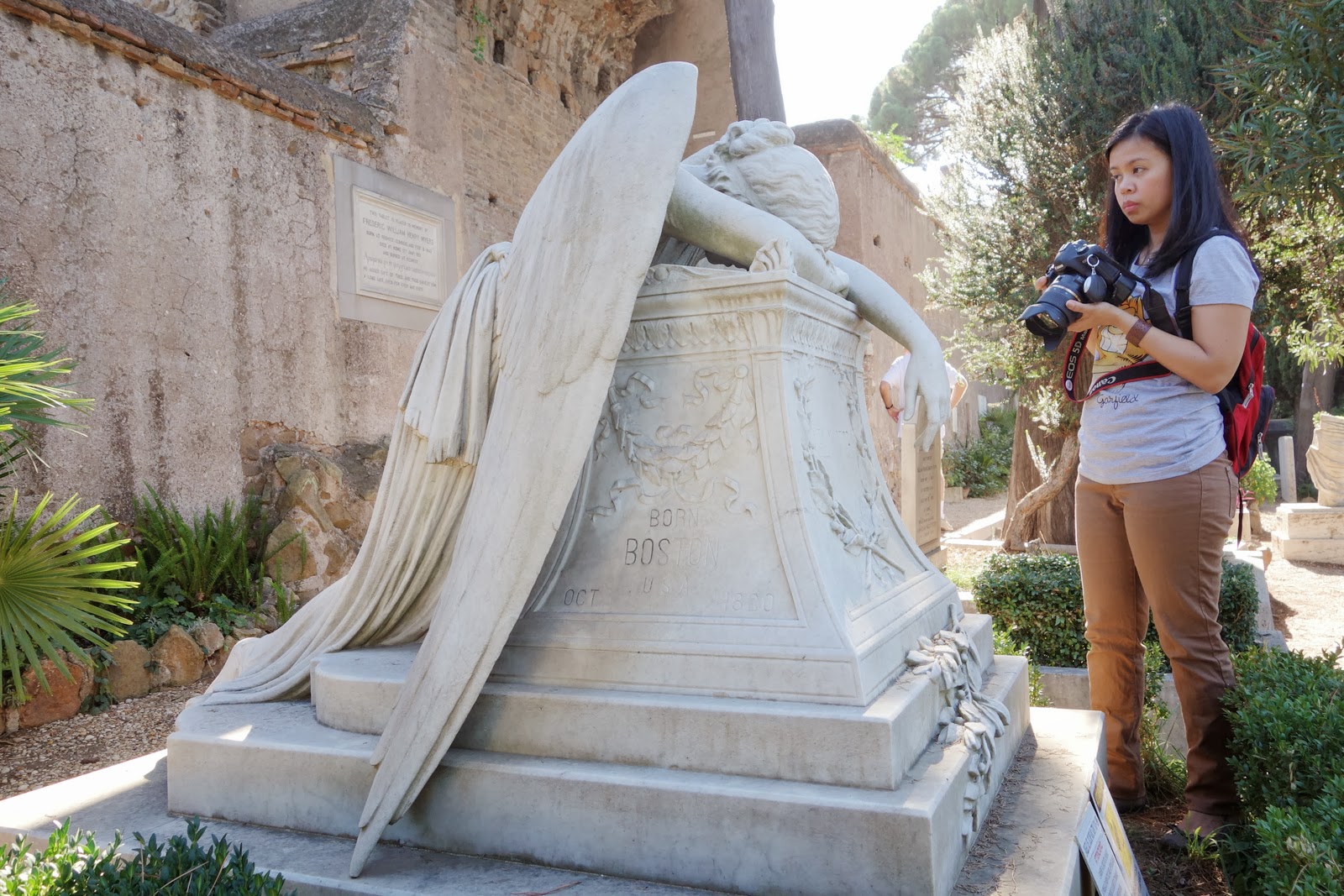 But if you harbor romantic dreams of being buried in such interesting company, there is a catch: you have to die in Rome to be eligible to rest in such crowded company. 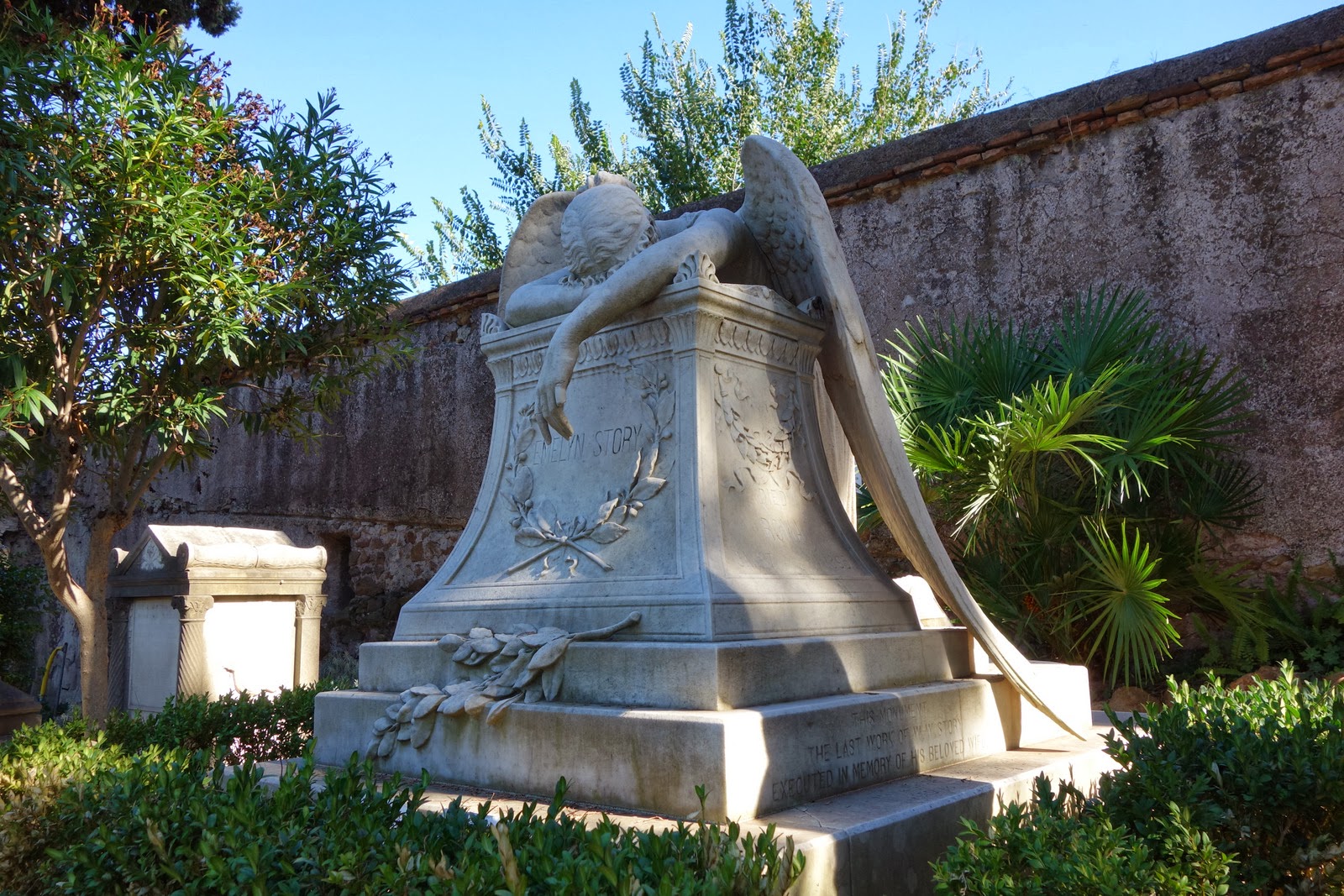 All photos by author.

THE CYCLE OF TIME – Tuscania