We were in Belfast, Northern Ireland and wanted to see a bit of the countryside. The Ard Peninsula seemed to be a good idea. It was a good idea until we were well on our way. It started to rain, then it rained harder, then the rain came down in buckets. We continued anyway along the grey windblown Strangford Lough, an arm of the Irish Sea, toward our main goal: Grey Abbey. The complex contains the remains of a Cistercian abbey and outbuildings founded in 1193 by Affreca, the pious wife of a nobleman, in thanks for surviving a dangerous sea passage. The monastery was dissolved in 1541 by Henry VIII and destroyed in 1572 during Elizabethan times. Although the abbey itself was partially rebuilt in the 17th century and used as a church until 1778 nothing except some gravestones now suggest that it had been touched since put to the torch and sacked in the 1500s. 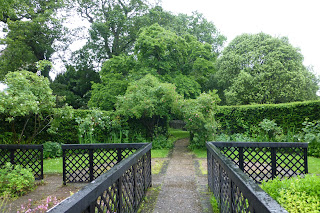 The ruins, set in an extensive greensward, stand open to the weather with the leafy graveyard to one side – a perfect location to visit on a rainy day if one wants to contemplate the passage of time. To enter the grounds we strolled through a reproduction of a medieval physic garden filled with the type of plants the monks would have used for themselves and the surrounding community. The industrious monks were the equivalent of our pharmaceutical companies, cultivating plants that were said to cure many common ailments – a catalogue of the unending miseries of medieval life and a few of our own.

Rosemary for aches, bad heart, worms in the teeth and as a digestive; Fennel for indigestion, bladder stones and as a diuretic; Comfrey to knit bones; Stavesacre to get rid of head lice; Herb Bennet to ward off evil, venomous beasts and bad breath.

Spearmint was also a mouth freshener and cured dog bites; Feverfew relieved fevers and hysteria; St John’s Wort was for anxiety and menopausal problems; Vervain was a good luck charm and cured plague; Betony was protection against witchcraft; Mugwort was also magical as was Rue, to be used against witches. Tansy expelled worms and banished fleas and bed-bugs; Lily of the Valley helped a weak heart and Paeony seeds were for epilepsy and lunacy. 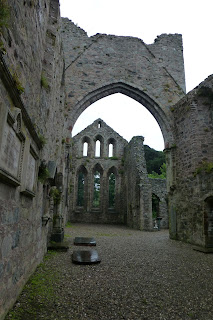 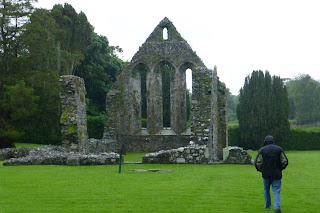 Passing through the dripping garden we entered the ruins. We roamed the grounds, umbrellas firmly grasped, looking at the stones, few in number but resolutely defying time. Interesting architecturally, the abbey was the first gothic-style stone church in Northern Ireland where every window arch and door was pointed rather than round headed. Squishing along we looked at the sodden graveyard wondering how many were there because the potions didn’t work against witches, broken bones or plague. If I was a poet I would have composed an elegy rather like Gray’s Elegy Written in a Country Churchyard in honor of the dismal sight. 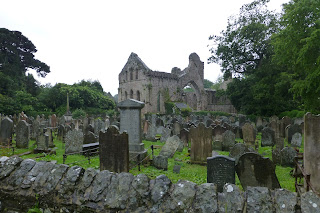 Half-drowned (and seeing no herb that would cast a spell against the rain) we headed for the little town of Donaghadee where Irish Coffee warmed us. The mug of strong coffee, laced with sugar and Irish whiskey and topped with whipped creamed warmed our insides. Our outsides were unexpectedly entertained by some impromptu local color:  an elderly man in a black suit hung with medals. He told us that he had just come from a funeral, but more likely it was a long and bibulous wake that prompted his ramblings about the past. Becoming more cheerful he finished up his narrative with a joke: Aer Lingus was over the ocean when one by one the four engines quit. Desperate, the pilot radioed for help. The controller asked for his height and position whereupon the pilot responded that he was 5 foot 7 and sitting in the front of the plane.

We laughed and went on our way. The sun came out.