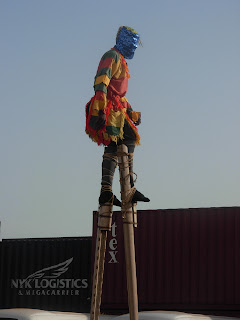 When we docked in Lomé, Togo at seven in the morning it was already burning hot. The stilt dancers and drummers on the dock were dripping with sweat.
Looking past the exuberant welcome I could see the hospital ship Africa Mercymoored nearby. Lines of sick and injured waited patiently to receive its mercies. The reality of West Africa with its scenes of deprivation mixed with smiles and music were before me.
Our guide and the driver pulled up in an air conditioned van and my husband, Glenn, and I gratefully slid into the delicious coolness. We set off for a day in the countryside with our hospitable twosome who talked about their tiny country and its 40 different ethnic groups. The two men wore the colorful wax printed cotton shirts that make Africans look so elegant. Similar designs were pictured on billboards along the roads near the city advertising a Dutch brand of the patterned wax prints that appear to be almost in motion with their swirling motifs. Outnumbering the attractive signs, dozens of other billboards entreated the populace to be tested for AIDS, to refrain from multiple partners and to be faithful. Some portrayed school-age children as their target audience in an effort to stem the ravages of the disease still scourging Africa. 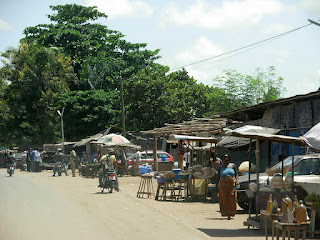 After we left the city behind the road was lined with rickety stands selling food and pop bottles filled with fuel for motorbikes, the only form of public transport. Children were everywhere. Their mothers and older sisters had the smallest tied to their backs, tiny feet sticking out the sides of cloth bindings. The women and girls carried food or laundry in basins on their heads. We passed a small fish market, really just a roadside table. A vulture sat on an overhanging limb eyeing the scene. Towering palms and enormous mango trees laden with ripening fruit shaded grass shacks. Farmers were bent double as they used short hoes to cultivate cassava, yams, sorghum and corn on plots too small for mechanized agriculture. Life looked hard, but even so adults and children smiled and waved as we passed. 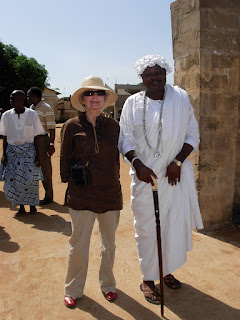 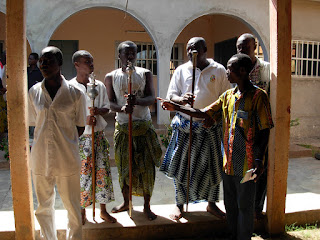 Our first stop was the town of Agbodrafo where the local chief came out to greet us. He was wearing what looked like a woman’s 1950s frilly bathing cap, a long white robe and a heavy chain of office with a pendant representing a traditional chief’s stool. Looking at the photo later it was clear that I was the one in a ridiculous hat. He handed his staff, a relic of Portuguese domination, to a helper before he poured a libation on the ground to welcome us to the dirt-poor collection of hovels built around the ruins of a Portuguese slave trader’s home. The chief’s compound had small cannons and rusted chains piled up against a wall, no doubt more residue from slaving days. The trader’s home, perilously close to collapse, had a plaque outside announcing that the head of UNESCO had visited once. We left a small donation to help in the repair but it seemed doubtful that it was much of a priority. Children and adults followed us as we walked, each side staring at the other, curiosity unassuaged. I tried to imagine their lives as we climbed back into our van, safely divorced from their poverty. 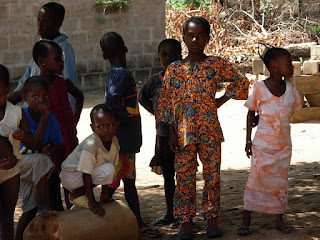 The next stop was to be our introduction to voodoo: a sacred forest near the town of Glidji. Outside the entrance stood a statue stained with some sort of liquids. Some of the drips looked like blood and others looked like – well, I decided I didn’t want to pursue the question. 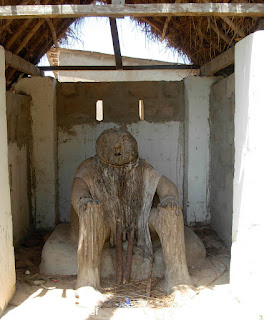 Again we were welcomed with a libation along with a pot of smoking incense. Nearby an enigmatic painted eye and inscriptions painted blue against brilliant white walls overlooked the scene. We were led to a shelter, the entrance to a sacred forest and there we sat with a few priests lounging in the shade. We lounged too until it was time to head for the main event, nothing having transpired in the heat. Not the voodoo we expected – it appeared to be a languid religion. 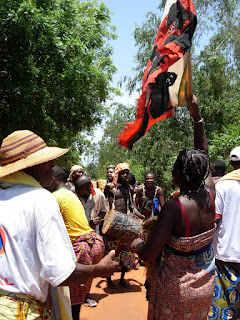 But as our van approached Hlande we could hear drums pounding. Some of the villagers crowded onto the dirt road to welcome us; a single drummer was encouraging them as they waved flags and shouted while we were escorted to the side of a dusty field. 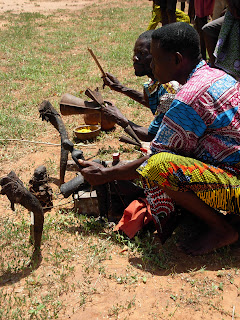 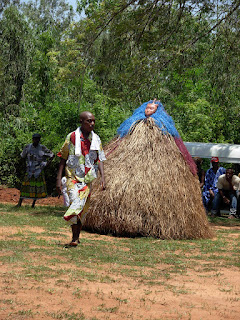 A row of drummers were already pounding, whipping up the crowd in preparation for a Zangbeto dance. Although the sun was high, the ceremony was a ritual celebrating Voodoo night guardians. A priest dressed in red carried a sacred iron bar as he chanted and danced around the field. Several musicians holding fetishes of feathers, bone and hair rang bells and hit other iron bars to encourage the crowd who were already in a state of high excitement. 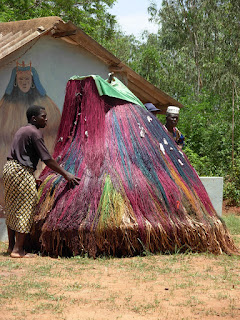 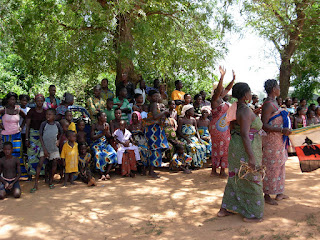 Then what looked like a colored haystack glided into the center of the dusty ground. The villagers in their ever-varied bright prints clapped and sang in encouragement as it began to whirl around and around. Some of the women worked themselves into a trance, writhing and shouting and falling to the ground as the stack spun. 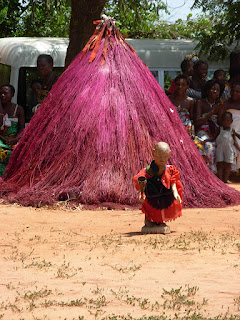 After about ten minutes the music suddenly stopped. In the silence six men rushed to the field to lift up the stack. No one was inside. Instead, as if by black magic, a doll was standing in the red dirt, one arm swinging a bell. Blessing us or invoking a curse? Then the pounding and clanging started again and another raffia covered conical frame spun around and around as if it were a tornado. When the music ceased a different doll waved at us as the haystack was dismantled to show that it had moved without human interference. The procession of haystacks continued and by the time an hour passed I was hypnotized by the boiling head, beating drums, the bells, the iron bars and the ceaseless movement of the women in their dizzying patterned cottons. Disbelief suspended, I could easily believe in Voodoo spells. What happened to the men under the haystacks? No doubt there was a trick but as the sweat poured into my eyes I couldn’t see it. 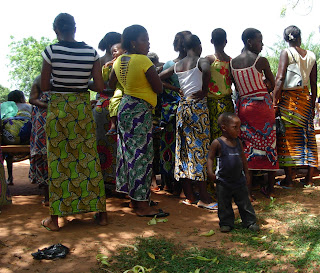 The noise and action continued but being tourists we had a schedule to meet when we wanted to remain. Beautiful children accompanied us back to the van. We were apparently as interesting as the ceremony. As we drove back down the dirt road we could hear the music continuing without us. 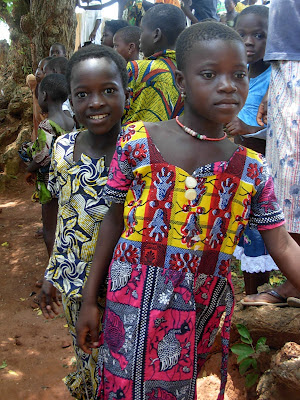 That evening back on the ship gossipers said that we had lost a passenger – he had died in his sleep – and that the widow opted to cremate him while we were in port. A limousine flying American flags pulled up as we were getting ready to cast off. It looked like an urn of ashes was being handed over. Rumor had it that she didn’t want to leave her bridge club to fly home with the remains. This was death number three in only two weeks.
Had a curse been cast on the ship? We wondered if we should have bought potions or talismans in the Fetish Market for protection instead of hand painted greeting cards. We had no one to curse but it would have been interesting to learn if the monkey skull one woman picked up to put a hex on her ex-husband worked as she desired.