Not too long before the terrible earthquake that struck Haiti I had occasion to visit on behalf of the United Nations. Now when I look back I see that Port-au-Prince was paradise compared with current conditions with the lack of housing, education and jobs, and the presence of cholera increasing the suffering resulting from their tragic history. 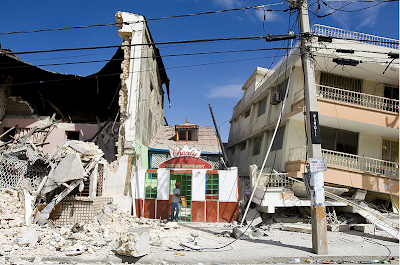 * * *
The airport in Port-au-Prince was a madhouse. Suitcases tied with string, plastic bags and cloth-wrapped bundles circled the conveyor belt. Aid workers, dressed in jeans and safari shirts; preachers, nuns and priests in their conservative garb; returning members of the Haitian diaspora greeting their family members, all competed to claim their baggage and get out of the crowded arrival hall. French and Creole music blaring from boom boxes added to the din.
On the way to Pétionville, a suburb south of the main city where my hotel was located, I peered out the windows of the air-conditioned SUV. Before me was a scene of burned out cars, mangy dogs, pigs, goats and people rooting in piles of rotting garbage, crumbling or half-built concrete buildings with tin roofs housing tiny indigenous protestant churches or small stores and repair shops. A few schoolgirls in uniform passed groups of men in tattered clothing idling alongside the road. Women with baskets or bowls on their heads walked along. 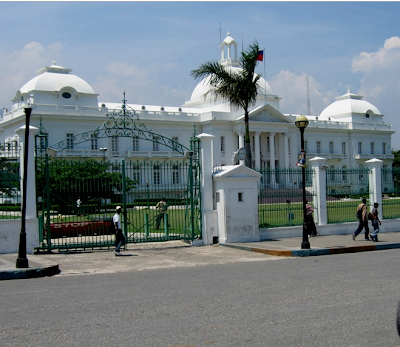 The city appeared to be one huge African slum dotted with a few exceptions like the white Presidential Palace and the main cathedral. “Where does anyone with money live?” I asked. My escort pointed to steep hills overlooking the city where the lighter skinned resided in gated estates near their exclusive shops for French pastries, food, wine and clothes, unthinkable luxuries for their blacker brethren in this country where,he said, skin color is closely observed.

It was pleasant sitting on the beautiful terrace of the Hotel Montana high above Port-au-Prince awaiting a ride to the office. That is, until I looked at the city spread out below in all its misery. Dust from the unpaved roads hovered in the air mingling with smoke from burning garbage rising in plumes in the hot air, an earthly vision of Dante’s Inferno and its circles of hell. The hotel was half-way up one of the hills neatly placed between the verdant heaven of the few rich and the crumbling hell of the vast numbers of poor. Favored by the few tourists on group tours and many aid workers, it had spectacular grounds with purple and orange bougainvillea, enormous hardwood trees, ponds filled with fish and tropical plants, a swimming pool, bar and dining room on the terrace serving Creole food. Open air public rooms were filled with Haitian paintings depicting idyllic scenes in magical realism style: well-fed people, forested hillsides and tropical scenes, fantasies all. Large flower arrangements with bird of paradise, anthurium and helicona graced the tables. African-looking Haitian sculptures stood in corners. Sofas and lounge chairs made of dark tropical hardwoods in Art Deco style invited guests to rest in while awaiting their rides. 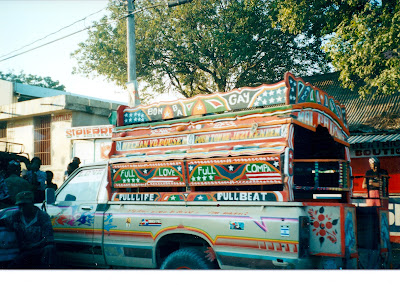 The road to the office from the hotel led along steep, narrow, winding, unpaved pot-holed roads. Women were selling a few fruits and vegetables spread on the ground and urchins tried to polish shoes or sell packets of tissue or gum. Occasionally, a man had a display of tin sculptures for sale. Pickups made into mini-buses hurried by loaded with people. The colorful vehicles were painted with slogans and designs. One had “Full Life, Full Love, Full Beat, Full Compa” along with “Bomba” and “Gay.” Rounding out the decorative scheme was a painted Israeli flag, various Chinese characters, stars, flowers and waves. The colors seemed a demonstration of defiance against the drab sea of crushing poverty. 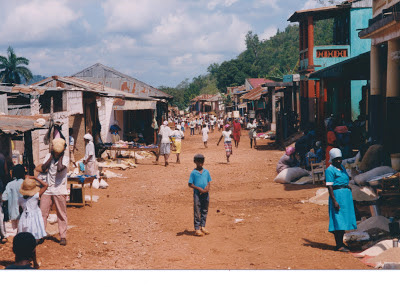 It was time to leave on the next leg of the trip. The itinerary was to travel first to Santo Domingo, the capital of the Dominican Republic, on the other half of the island of Hispaniola and then on to Nicaragua via Miami for the final stop. Even though we had less than 200 miles to drive, it was a long day’s journey. A two-car convey showed up at the hotel at sunrise. The vehicles were equipped with several radios and sported impressive antennae waving in front of the windshields. Their presence suggested danger. 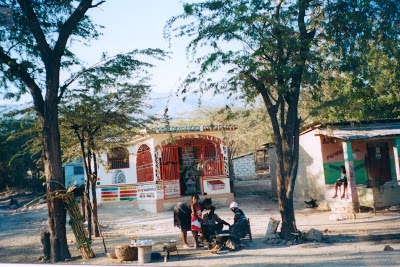 But it was peaceful as we passed hamlets with people squatting outside their huts cooking food over charcoal, the only fuel readily available and the reason for the denuded and flood-prone hillsides where the charcoal makers cut down the trees that others had planted in an effort at reforestation. Cemeteries with half-built mausoleums of tile, drug lord compounds and tiny stores with “Articles Divers” painted above the grilled doorway lined the roadway. Barefoot women with baskets on their heads leading laden horses and mules walked on unpaved side roads.

When we arrived at Lake Azuei on the border crossing at Jimani, a long line of trucks and pickups waited. A boy in a red, yellow and blue boat poled along the lake bringing sacks of charcoal to market. A rickety table and two chairs sat in the dust in front of a blue and white painted mailbox near the custom house. The iron-grilled gate marking the border was closed for inexplicable reasons, a frequent occurrence, and reflective of the Dominicans profound dislike and distrust of Haitians. Almost all food in Haiti is imported and these waiting trucks with their frustrated drivers were trying to get across the border to pick up produce. Brightening the chaotic scene, the vehicles sported the same colorful paint jobs as in Port-au-Prince. A dust covered truck behind us in the lineup said “Immaculee” over the cab and “Exode 14” and “Generation de L’An 2002” on the sides.
Nothing was moving. My driver went to the border post to try to get my laisser passer (UN passport) stamped for exit. No dice. After 45 minutes of no action, he drove around the lineup. Seeing the blue “UN” painted on the white SUV, the Dominican authorities opened the gate and stamped my passport even without the required Haitian exit stamp. Our escort turned back.
* * * 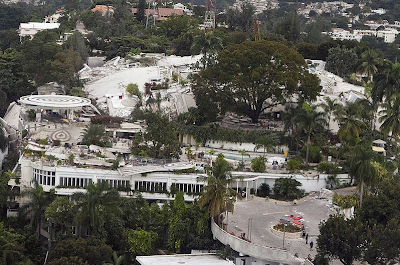 The earthquake caused the collapse of the Hotel Montana, entombing the staff and over two hundred guests, many of whom were aid workers. 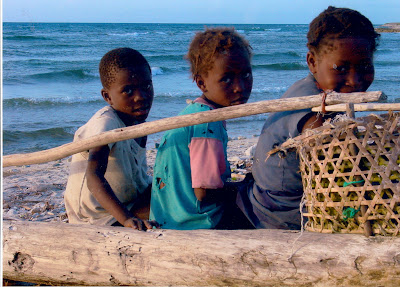 I treasure three photos given to me by a doctor. The first is a beautiful mother and child (shown at the top of the post), second is of three delightful children, happy in spite of poverty. 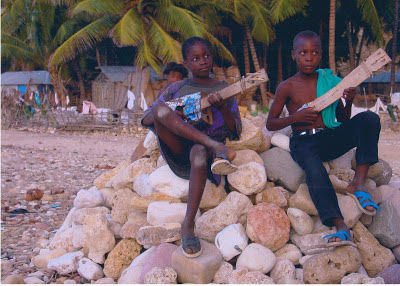 The third, two boys dressed in rags sitting on a pile of rocks in front of hovels with corrugated tin roofs shaded by palm trees. They are pretending to play guitars, each made of a board, two pegs and two strings. Whatever music was made, they represent an indomitable will to survive in that often sad place. I pray that they are still alive.