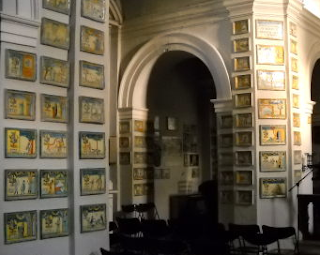 The Madonna delBagno is a small church nestled inconspicuously near the main road to Deruta. It is famous for painted ceramic tiles affixed to the walls by worshippers in thanks to the Virgin for rescue from near death. 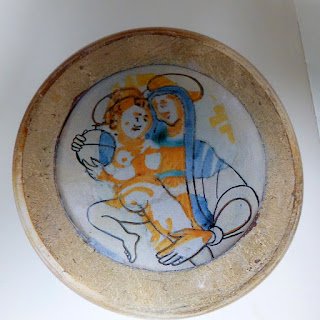 In the 17thcentury, an itinerant merchant, one Cristoforo Merciaro, or Christopher the Peddler,  found a ceramic fragment on the ground. Fourteen years earlier, a Franciscan monk had placed the little piece, painted with a primitive image of the Madonna and Child, in an oak tree for safekeeping.

The story continues: The merchant returned the fragment to its place and prayed to the image to save his dying wife, whom he did not expect to see alive again. When he returned home from his travels he found her not just alive but “out of bed in perfect health, sweeping the floors.” This housekeeping miracle gave rise to the fragment’s veneration. 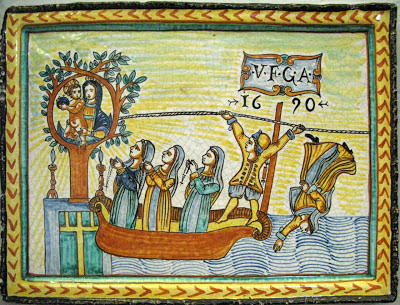 The church, built to commemorate the event, became a magnet for ceramic artisans from nearby Deruta, a center for majolica-decorated terracotta tableware and decorative items made there since the Middle Ages. 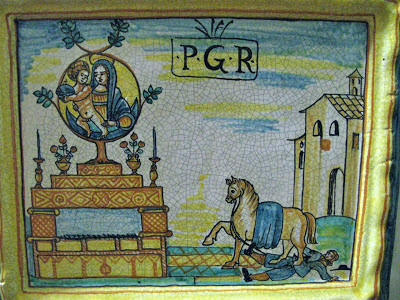 The local inhabitants expressed gratitude for their own personal miracles by making ceramic ex-votos thanking the Madonna for her aid in times of danger. The original image of Madonna and Child, painted on a broken cup, still survives as shown above. Its depiction of a small Madonna holding a large fat Child who in turn holds a globe is a delight to all mothers. The colors are simple blue and yellow on a white background, the predominant colors on traditional Deruta ceramics. 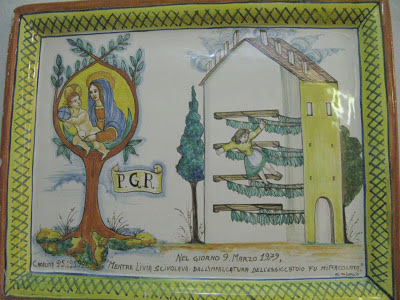 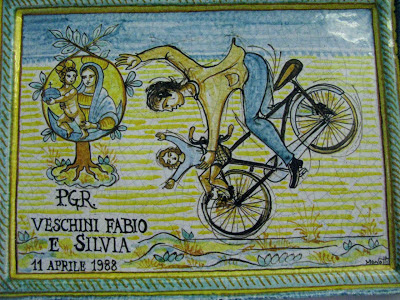 Glazed terra cotta plaques made by the local artisans eventually covered the small church’s walls. These tiles had a partial miracle of their own: about 200 were stolen in 1980, but about half were recovered to grace the walls again. There are now about 600 plaques covering every aspect of human misery averted by the Madonna’s grace. Although varying in shape they all have a disaster scene, the Madonna and Child, usually in a tree, and the initials P.G.R. sometimes written out as Per Grazia Ricevuta, for grace received.

Folk art in style, they depict scenes of people being miraculously saved from falls off roofs, tobacco drying sheds or out of trees, attack by animals or bandits, floods, fire, lightning, earthquakes, plague, or the dangers of childbirth. 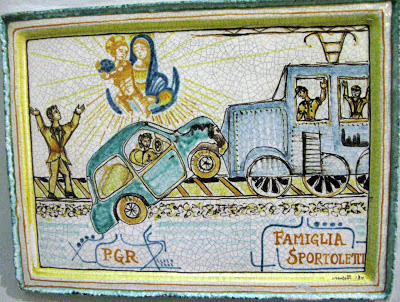 While most plaques are from the 17th and 18thcentury, reflecting the rigors of life in those times, survival from more contemporaneous disasters are also memorialized, especially auto accidents. Grateful familis have even commissioned tiles with scenes from World War II as well as the miseries of Bosnia-Herzegovina.

All the tiles are colorful and hopeful, but also a reminder that whatever can go wrong will go wrong. I thought about ordering up one to celebrate my escape from death when I fell in the Rome subway or our avoidance of jail after the crash with the Carabinieri. 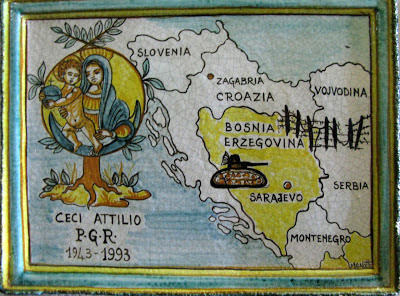 This story originally appeared in Coins in the Fountain, a memoir of living in Italy