By
judithworks
on
A silent young man picked us up in front of our hotel in Cape Town near a post carved with animal heads depicting four of South Africa’s big game. 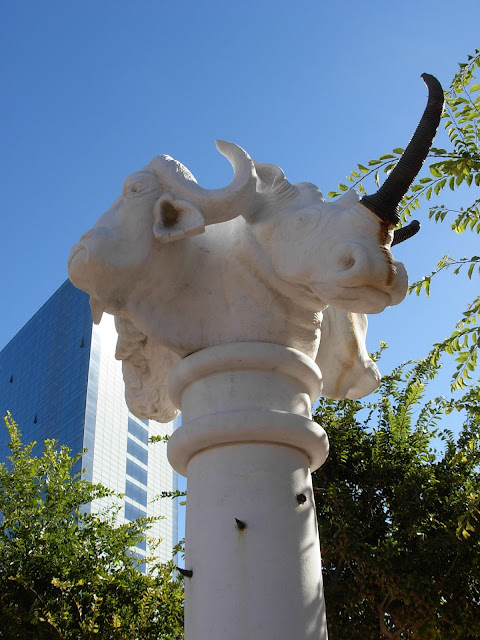 We climbed into an SUV for a three-hour trip to a game preserve north of the city in an area called the Karoo. As we passed the sad townships, some with small houses and others with tin shacks, we were reminded of the deep poverty that envelopes so much of South Africa. 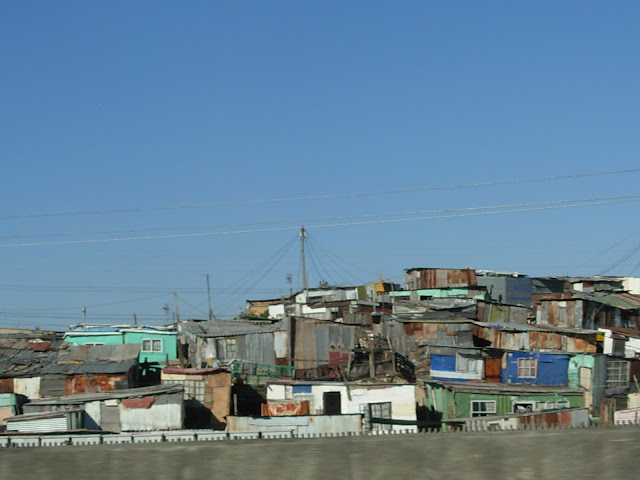 The contrast was emphasized when we came to the lush and manicured wine country with manor houses in Dutch Colonial style and acres of vines tended by black laborers. The landscape gave way to orchard and fields of grain. Small towns were anchored with sharp-steepled churches and small shops advertising braai (barbecued meat and sausage). We stopped in the delightfully-named town of Ceres (the Roman goddess of grain) for cold drinks before starting into the vast and empty Karoo. An enormous semi-desert, it is dotted with isolated farms and sparse vegetation that springs to life in the occasional rains. 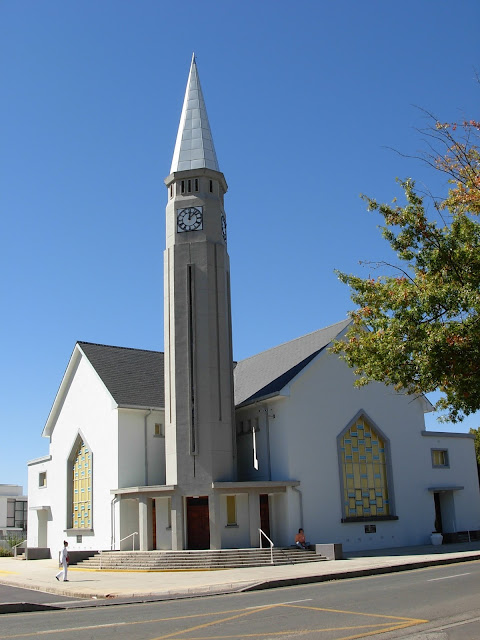 Our destination was the Inverdoorn Game Reserve where we were to spend several days on safari to see the animals. The preserve encompasses 25,000 acres of fenced land and includes a cheetah breeding operation. But it is also home to many other of Africa’s animal wealth: Cape lion, zebra, Cape buffalo, rhino and hippo, giraffes and many species of antelope.
Not long after checking in we were greeted by two cheetah cubs (on leashes) coming to visit our bungalow. They were like large kittens rubbing against us, purring with a deep rumble. We petted the coarse fur and wondering what they were thinking, hoping that it wasn’t about dinner even though we’re pretty stringy. Their handler played with them but that ended when he put his fingers too close to one cub’s mouth and found his hand trapped. Another young man coaxed the animal to open up. No damage done but as my mother said, “Keep your hands to yourself.” 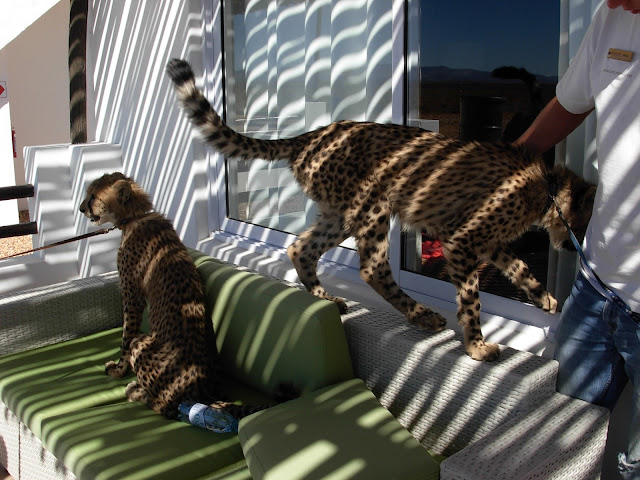 At dusk we drove deep into the preserve to watch the adults being trained to hunt. The conservationist told us that they will not breed unless they are in peak condition and must be thoroughly trained to hunt before they are released into the wild if they and their progeny are to survive. A pickup truck dragged a dead chicken on a long wire with the animals racing after it. The winner got the spoils and the others had to wait for the next run. They can run up to 70 miles an hour in short bursts – a spotted blur in the evening gloom. 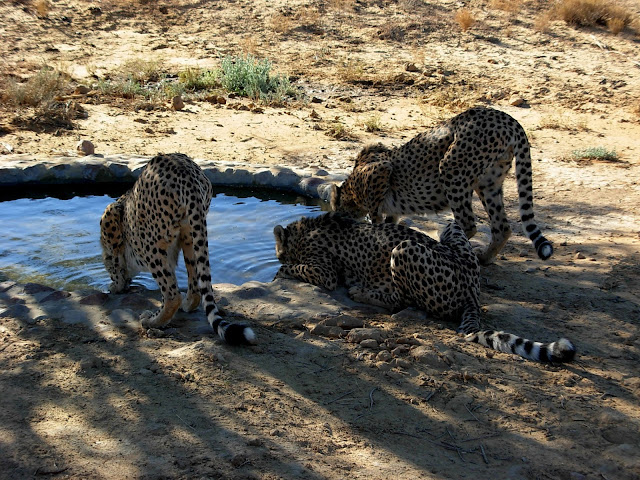 The following day a group of day tourists arrived for lunch. Several rambunctious children were in the group and when the cubs were brought out they lunged at the children, more of a bite-size meal than us. Wild animals they were and I was content to admire them from a distance.
Although our room was luxurious and it was tempting to lounge around the pool, the attraction of the animals got me up before down, ready with camera and binoculars. The animals were so close that I didn’t even need a telephoto lens. 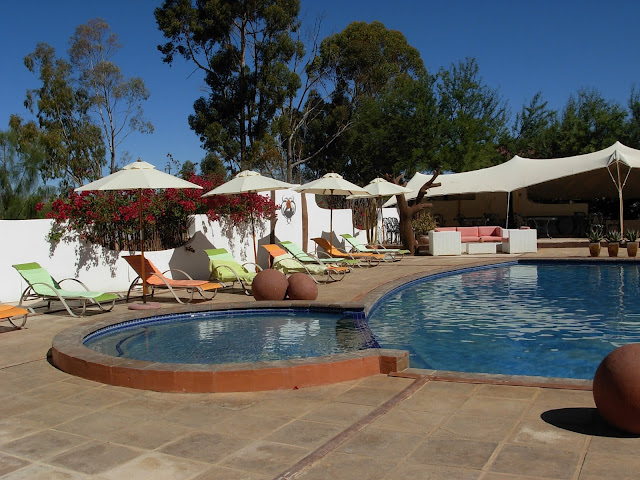 Rhinos and Cape buffalo, looking oblivious to our “ohs” and “aws” strolled to a waterhole, zebras cavorted, and giraffes trotted by with their rocking gaits. The low light cast a golden glow over the scene. 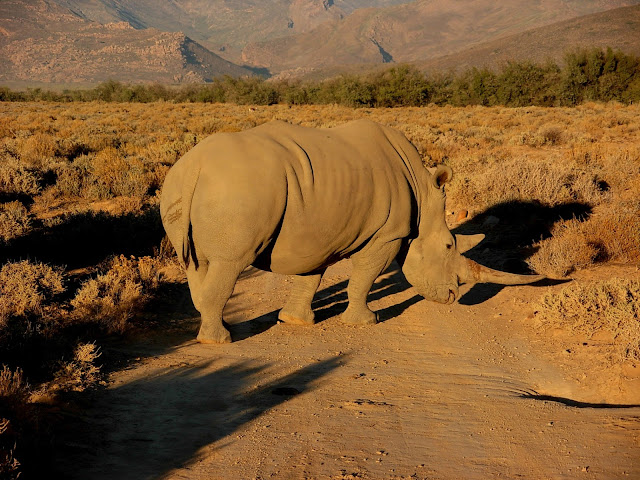 The homely gnus grazed but other large antelopes were stately as they looked at us curiously before moving slowly off into the brush in a dignified manner. The smaller antelope like springbok bounded around like hyperactive ten-year-olds. One apparently didn’t jump fast enough when on a morning game search we saw blood on the trail, the remains of a partially-eaten carcass and a leopard print. The leopard had leaped over the fence for a meal and was long gone but would return that night. 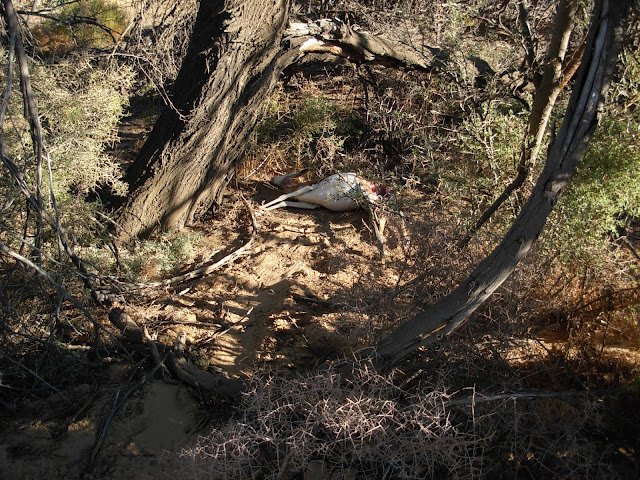 The Cape lions, apparently extinct in the wild, were in a separate enclosure, the only zoo-like aspect of the game preserve. The guide opened both gates and we drove in. She closed the gates and turned the key in the ignition. It wouldn’t start. There we were like a pair of Daniels in the lions’ den. A tense few minutes followed while she radioed for backup. Fortunately they weren’t hungry. While we waited for help, we watched as the black-maned male mated with one female while the others in the pride napped in the shade of a few trees in the hot afternoon, uninterested in the coupling next to them. 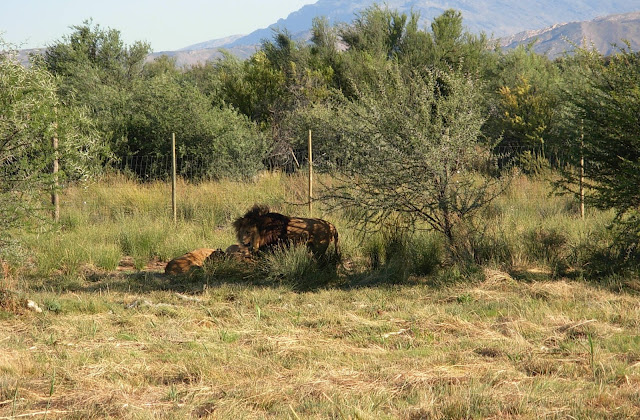 It was hard not to think of all the wildlife being slaughtered without care throughout the continent. A tragedy for them and for us. We felt fortunate to have a small chance to see what is left outside the national parks, too far away for us on this journey.

We were reluctant to leave. The same driver came to pick us up for the journey back to Cape Town. This time he was conversational, telling us about his life. He was a migrant from the Congo. Economic migrants are bitterly, sometimes violently, resented by South Africans who are desperate for jobs. He was trying to support a family in his home country but said the pay was so low it was nearly impossible to sustain himself and them, and that he suffered constant discrimination. It seemed to us that not only were the animals under siege, but also the people of every country in the region, all seeking work no matter where the quest led them.

We took a different route than the outgoing trip, this time over craggy and mostly barren steep hills. Proteus, the national flower of South Africa, bloomed in crevices. At the summit we came upon a troop of baboons, dangerous to people and destructive to crops, preventing us from getting out of the SUV to enjoy the view. We descended and reached Ceres again where a long line of angry-looking agricultural workers marched along the roadway holding signs, some in Afrikaans and others in English. Low wages and not enough work – the universal problem. 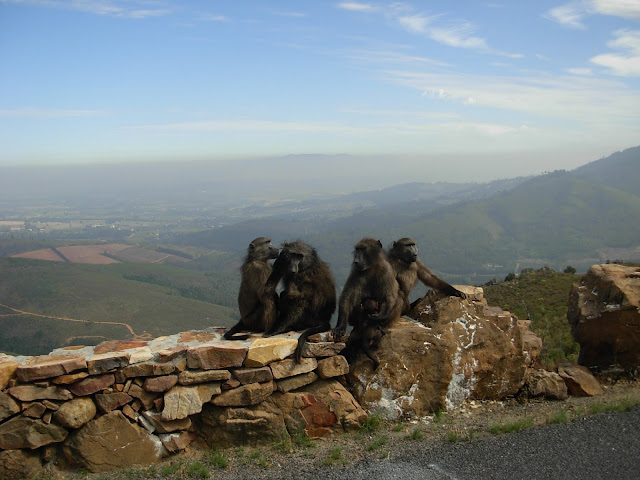 We stopped at a coffee shop before we reached the city’s outskirts and convinced the driver to join us for a snack. He reluctantly did so, silently drinking a Coke and eating a sandwich. The other patrons stared at him. It was clear that he was accepted by neither whites nor blacks, caught in a harsh world of great beauty that offered him little.
How sheltered we were from reality again when we said good-bye and entered the enclosed world of a fancy hotel on the Cape Town waterfront, far removed from others’ problems, both animal and human.

Bisbee – From Mining to Tourism