By
judithworks
on
I’m one of those people who love Milan. It doesn’t have ancient ruins or hordes of tourists but it is the Italian capital of design, especially fashion. The last time we arrived at the central train station evidence of the creative zest was everywhere from the 1930-era mosaics near the tracks to the fashion stores filling the main concourse and upper levels. 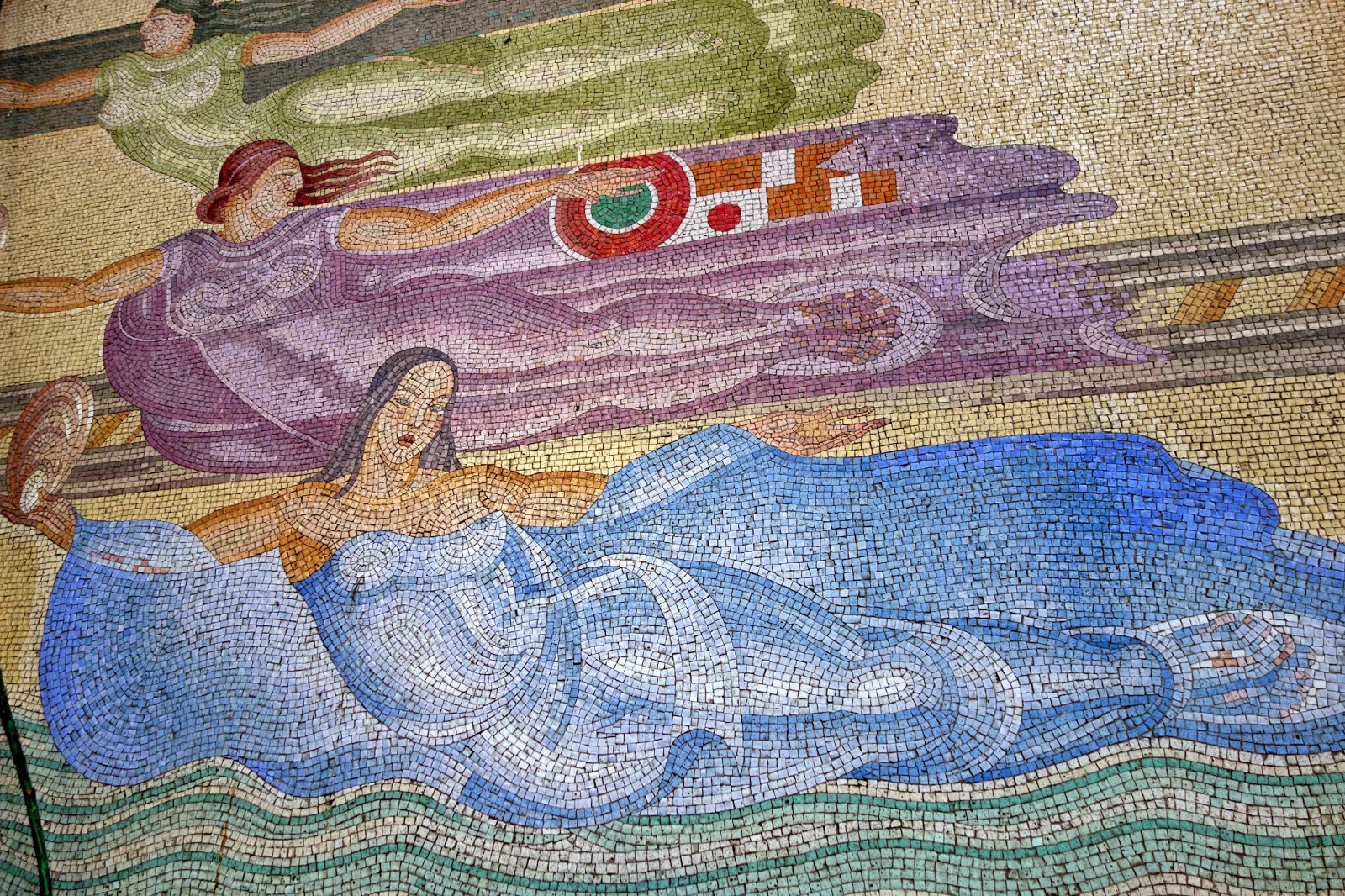 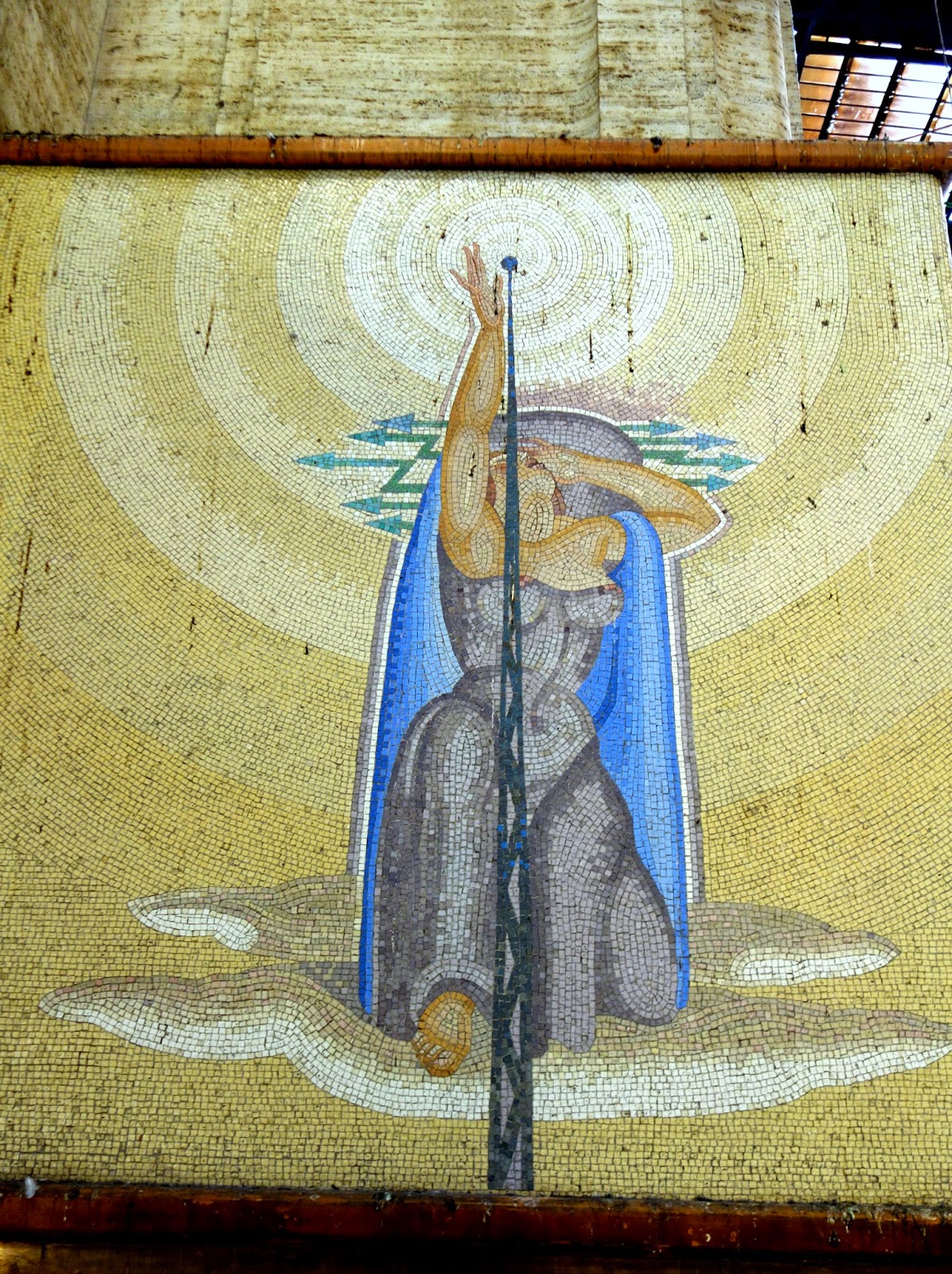 A few subway stops away is the historic center dominated by the Gothic spires of the Duomo, or main cathedral. Begun in 1386, it was finally finished in 1809 on orders of Napoleon. 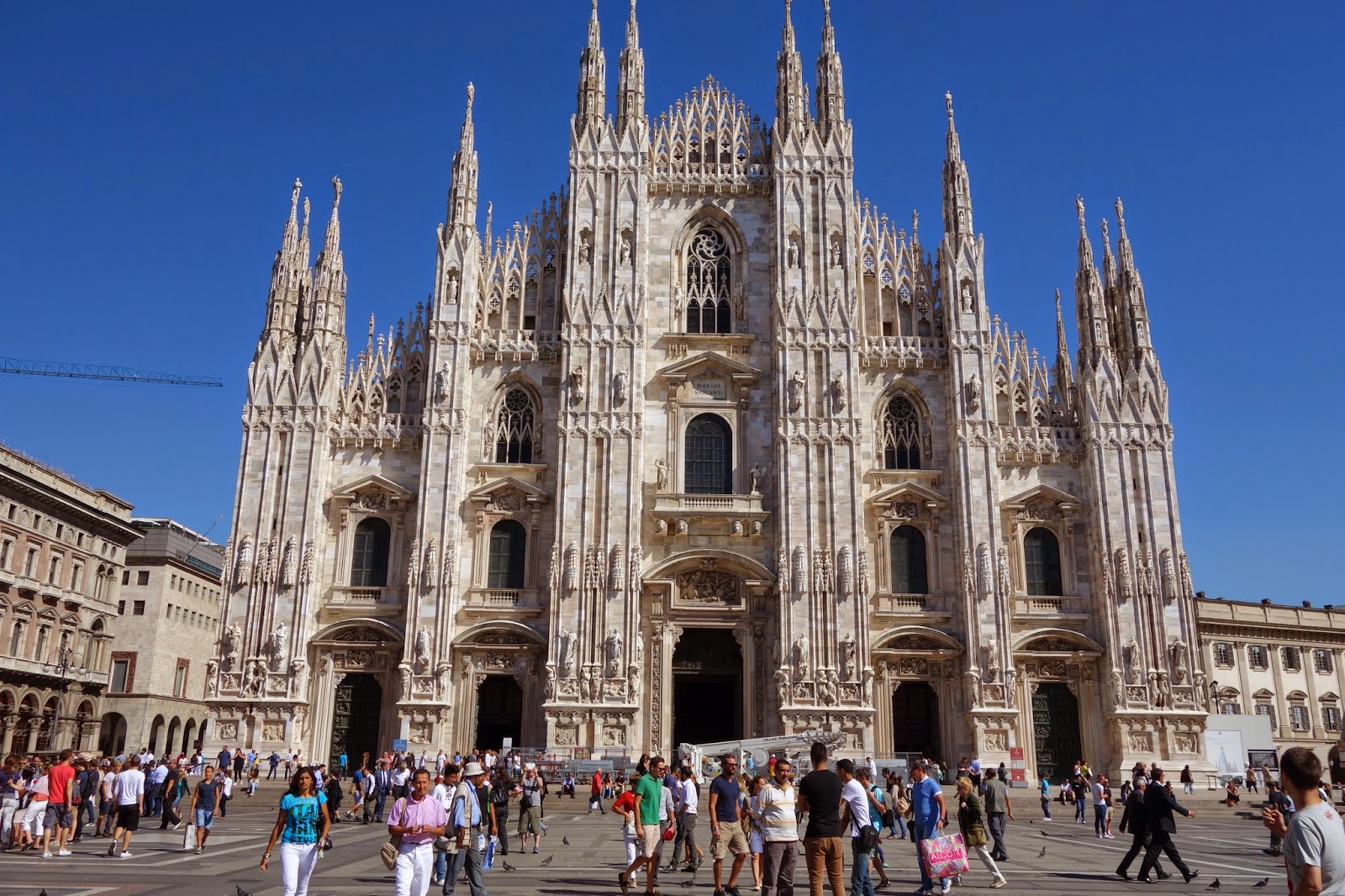 We climbed up to the roof to take in the view of the distant Alps and marvel at the intricacies of design and construction of the building. 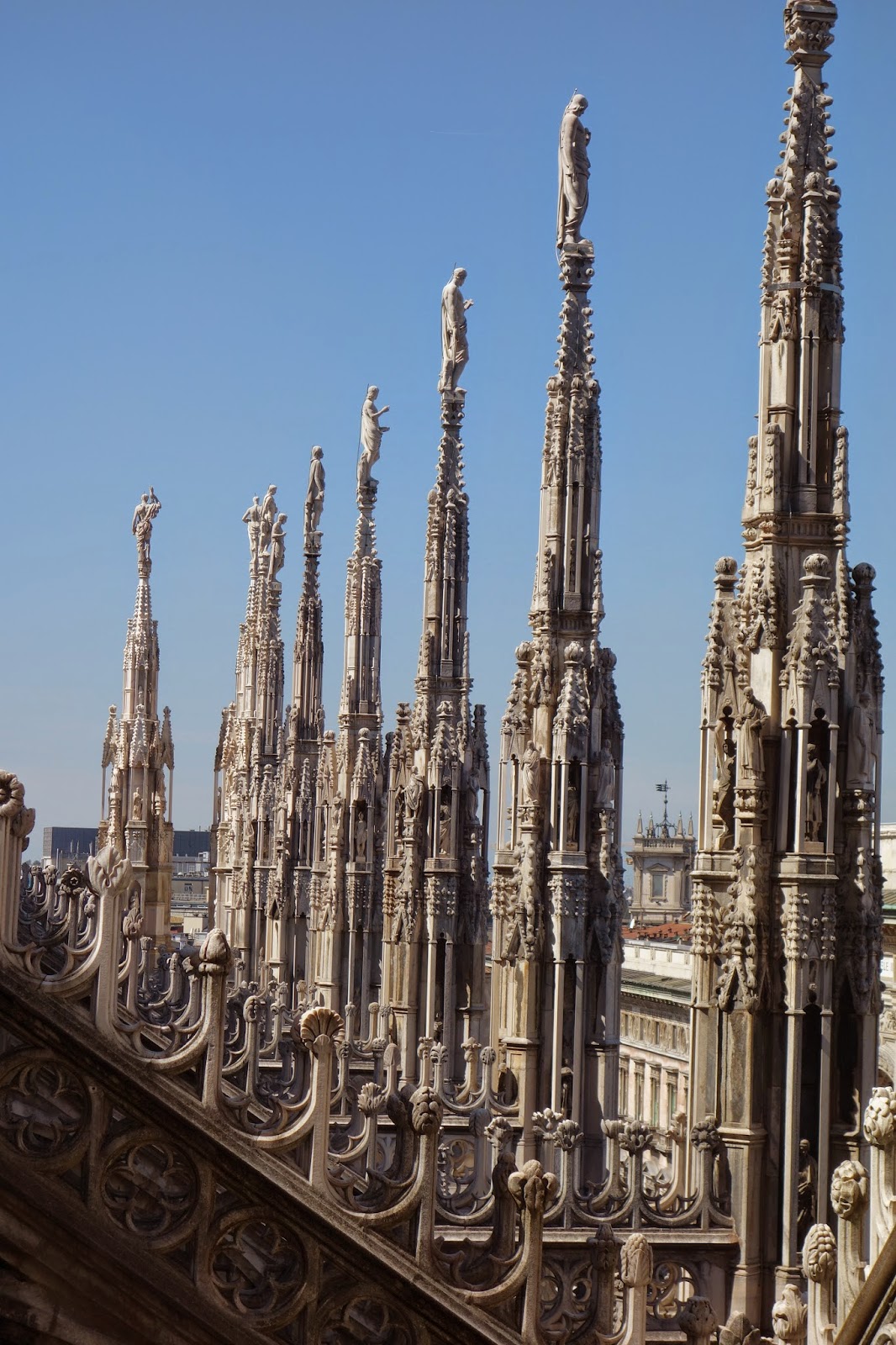 But when lunch time arrived our eyes moved from the statues topping the spires (and the sight of a woman helplessly watching her cell phone slide off the steep roof into the abyss) to what the people on the seventh-floor terrace of La Rinascente department store opposite were eating. Sacrificing ancient stones in favor of a caprese under a sun umbrella, we joined the other diners after passing by the chocolate shoes crafted in honor of upcoming Fashion Week. 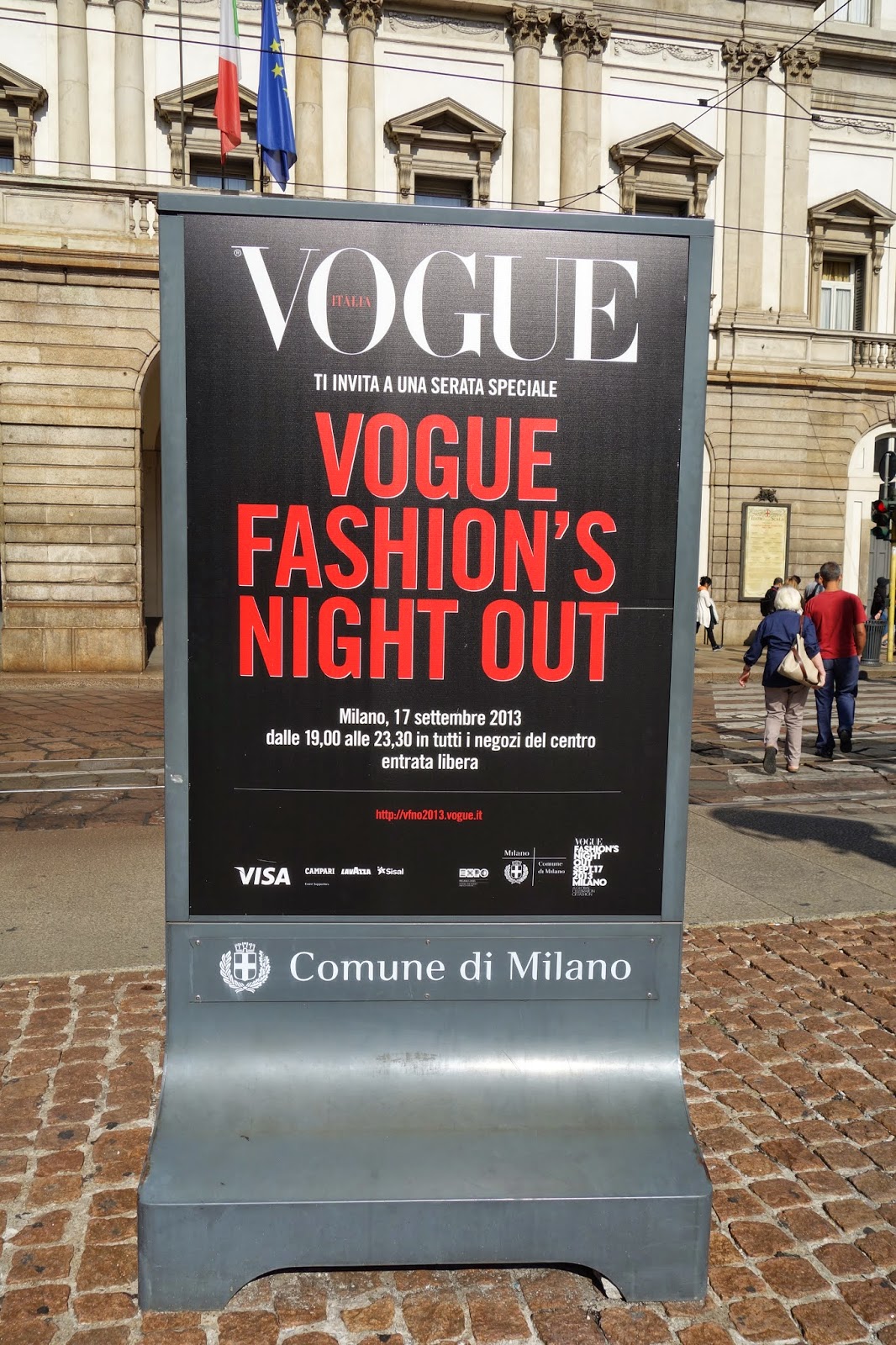 All the women looked like models or buyers for boutiques and all the men looked like stylists. Their talk was as animated as the swirls of smoke from elegantly held cigarettes wafting in the breeze.

We walked off lunch by strolling in the Galleria Vittorio Emanuele, a monument to the Milanese lifestyle built in 1877, They were filled with tempting fall outfits to wear when strolling along avenues lined with chestnut trees whose leaves were beginning to flaunt their own fall colors. The glass-domed mall with its intricate inlaid floors serves as Milan’s living room where sipping an espresso or Prosecco and watching the fashionistas gazing at the shop windows isn’t a bad way to while away an afternoon. 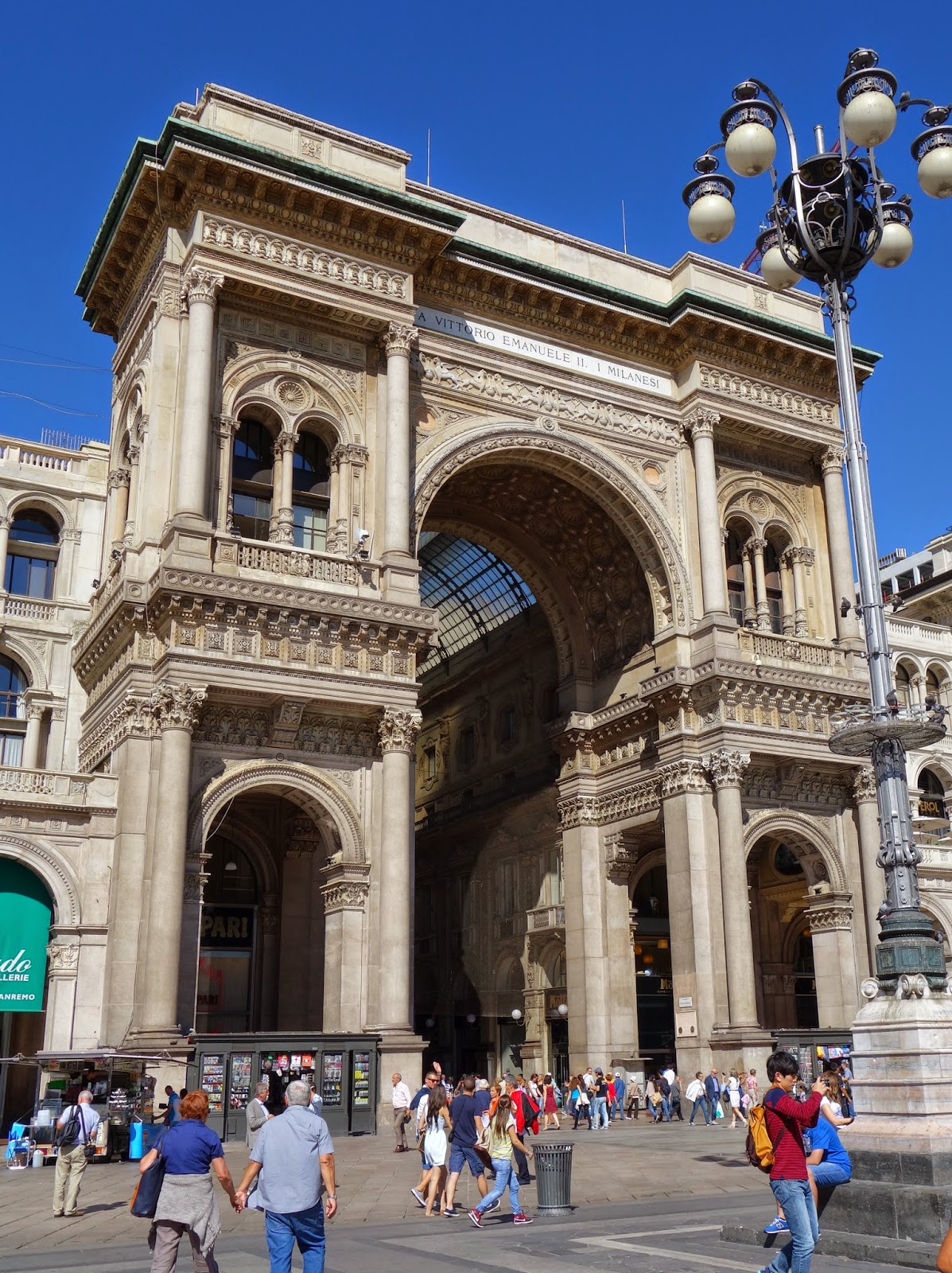 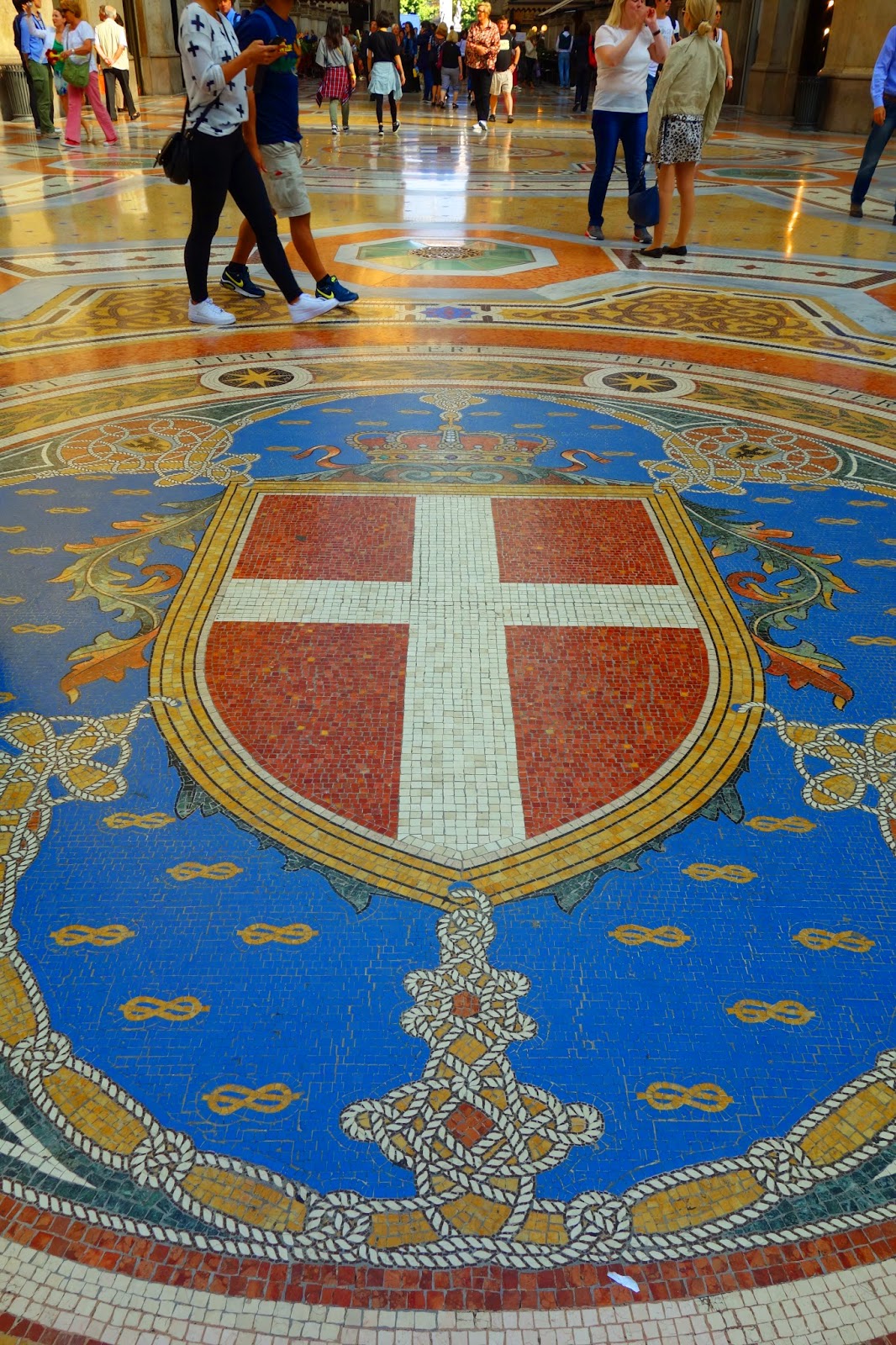 But we wanted our afternoon coffee in the sun.We ventured onward to La Scala,the premier opera house in the world. The season would not begin until late fall but we enjoyed a coffee at the bar outside the entrance to the museum which celebrates the great Italian composers Verdi and Puccini and some of the divas (one from the 1800s with the delightful name of Giuditta Pasta even though Milan’s favorite starch is risotto). Actually, I love the name as it is Italian for Judith and what could be better than paired with my favorite food.

Next to us was a trio of well-tailored Milanese businessmen who seemed to have all the time in the world to drink their afternoon cappuccinos (normally considered a no-no in Italy) and gesture expressively in animated talk. While we watched them out of the corner of our eyes we reminisced about our night at the opera several years ago. The production of Rigoletto was superb – equal to the amount of the bribe we paid to get the tickets.

This time around we skipped the faded da Vinci fresco, The Last Supper, in favor of a tour of the The Museum of 1900s (Museo Del Novecento), and the Villa Necchi-Campiglio. Both buildings are in the Italian Modernist style of the 1930s – my favorite architectural style.

The museum, a few steps from the Duomo, leads the visitor on a survey of Italian art from 1900 to the 1970s. The top floor contains a neon installation by Lucio Fontana that sets off a view to the Gothic Duomo, neatly putting a parenthesis around much of Milan’s history. 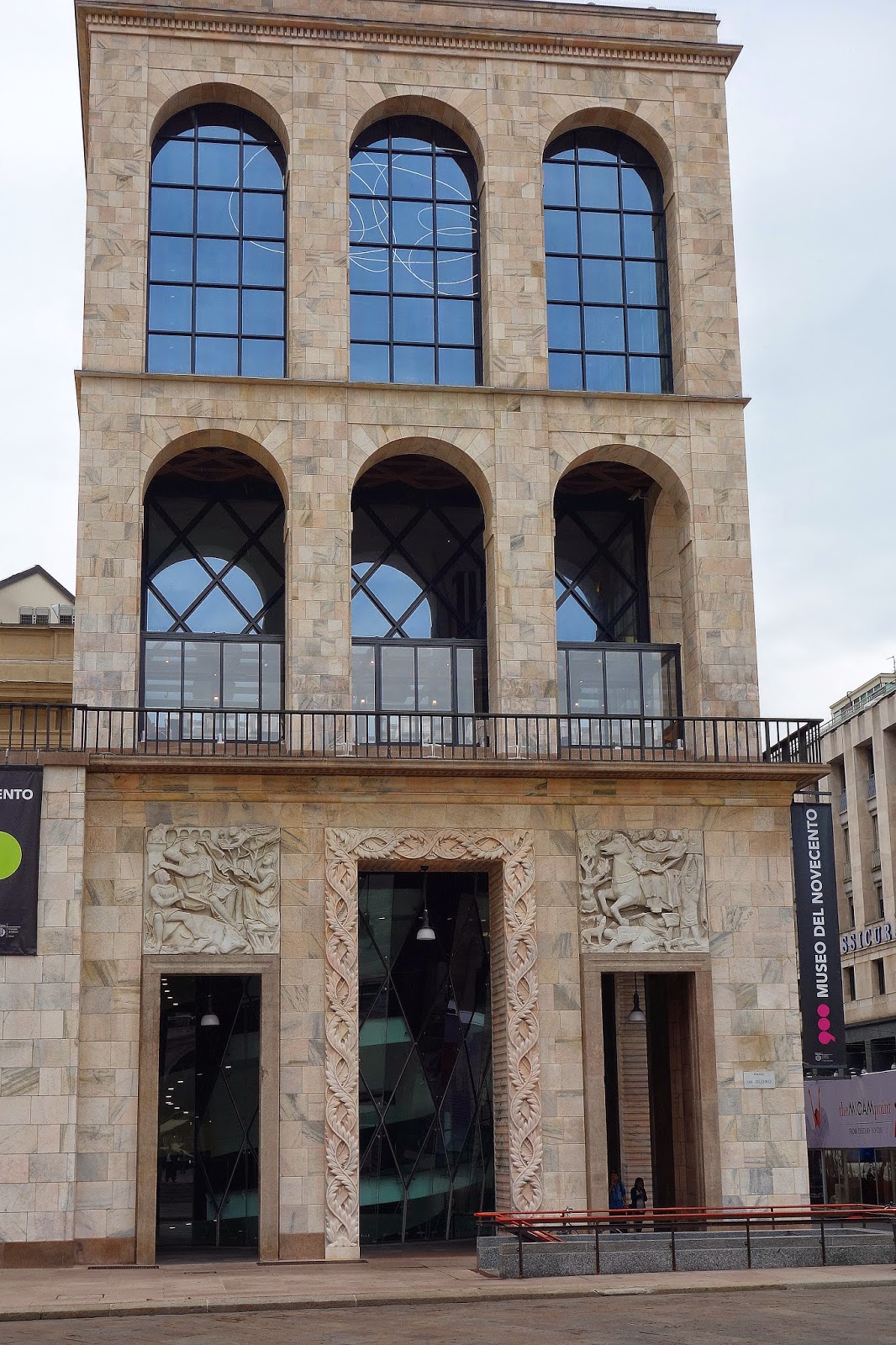 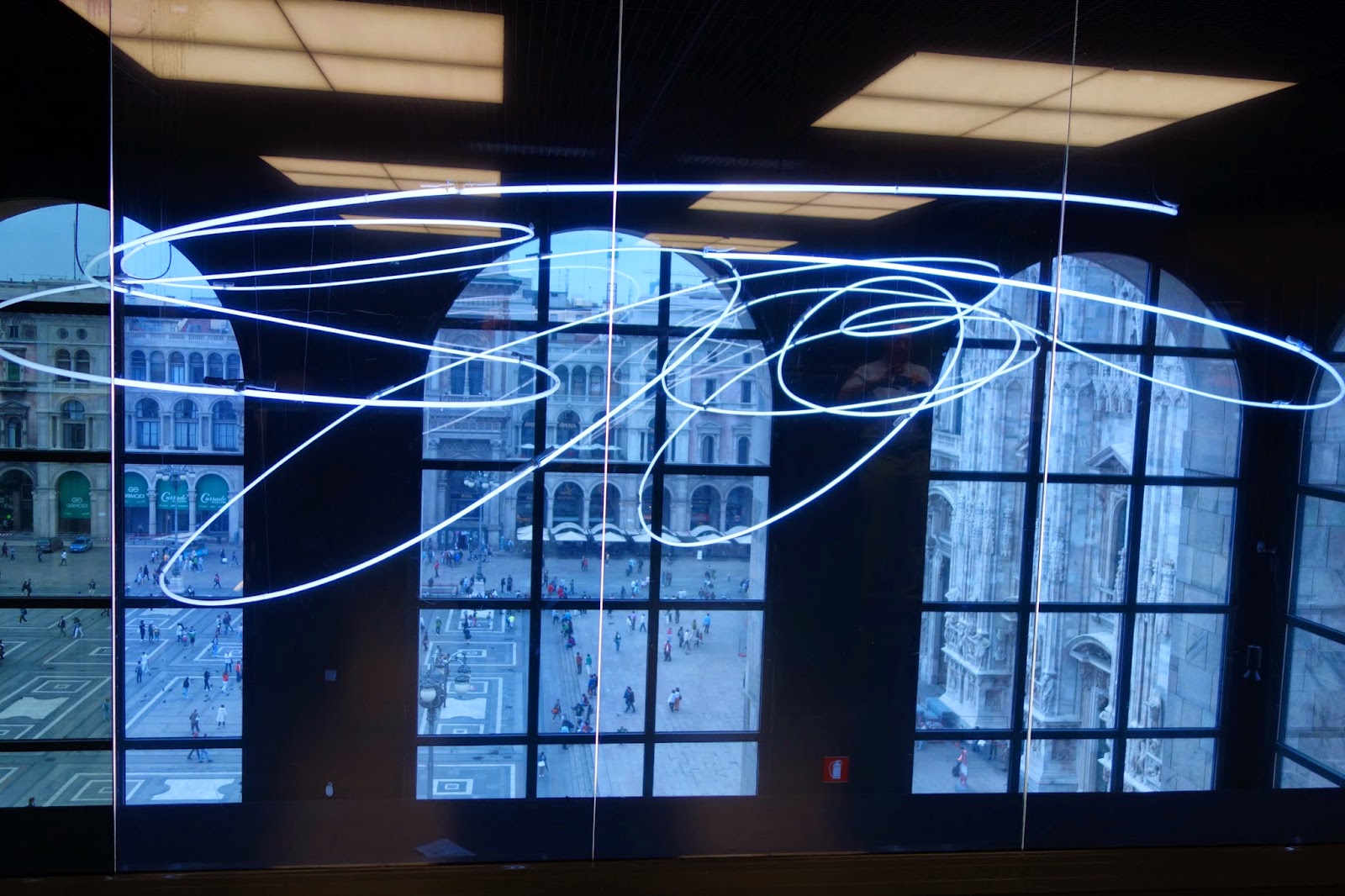 The Villa is set in the fashion district, a short distance away. 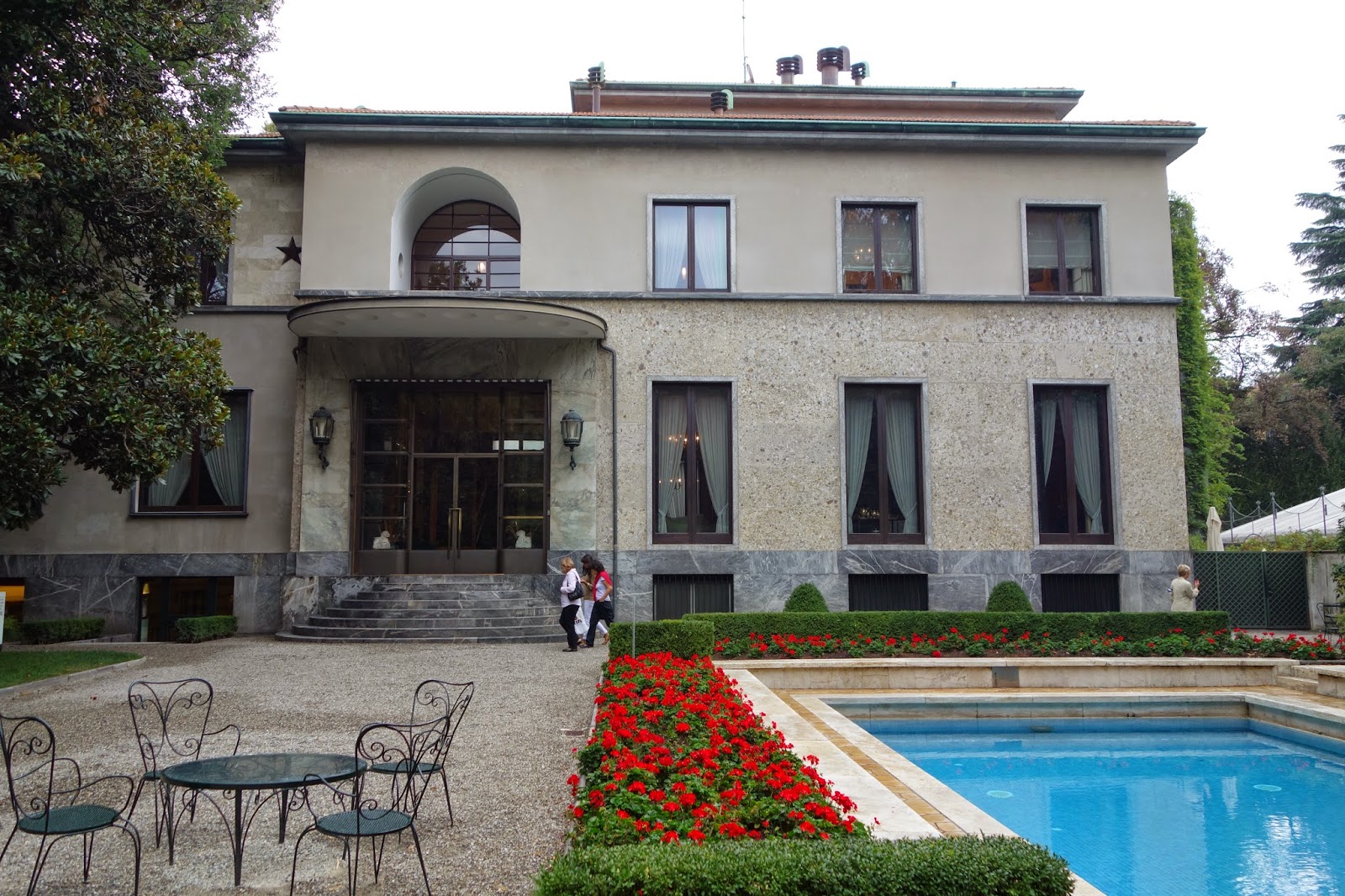 Built, built between 1932 and 1935, with its gardens, tennis court and swimming pool gives a taste of the rich life of a prominent industrialist. My favorite room is the Veranda with huge windows that slide open in the summer, inlaid marble floor, pale green S-shaped sofa, and a lapis-lazuli table set with blue Chinese vases. It was easy to visualize the former occupants reading or chatting with friends like the Kings of Italy and Spain who dropped by to visit. 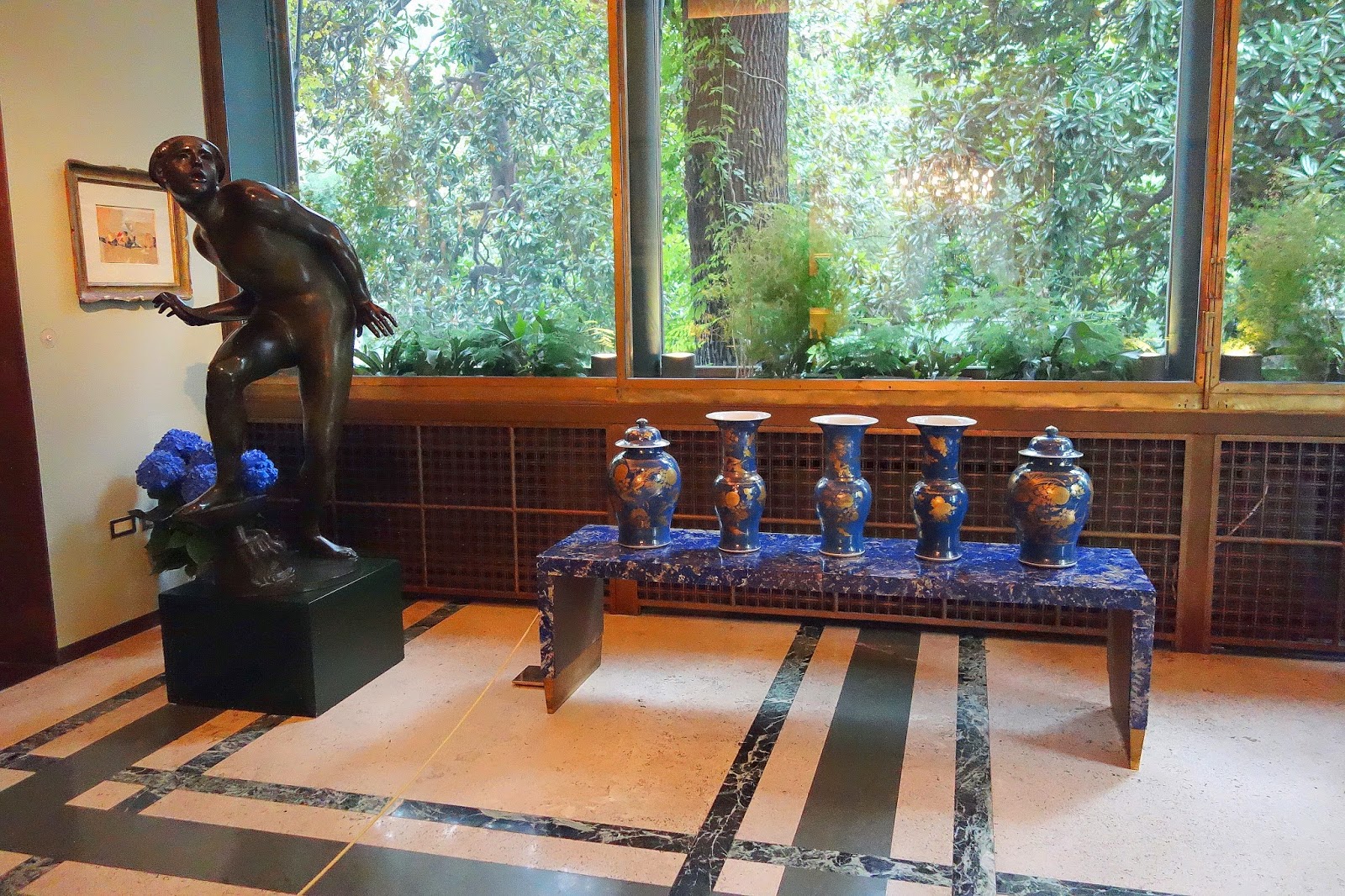 But did I mention shopping?Did I mention shoes, chocolate or otherwise? Lest there be any doubt about Milan’s focus, our hotel room had maps and booklets stuffed with information about the hundreds of designers whose boutiques and showrooms line the area around Via Spiga and Via Montenapoleone, along with many other shopping districts. 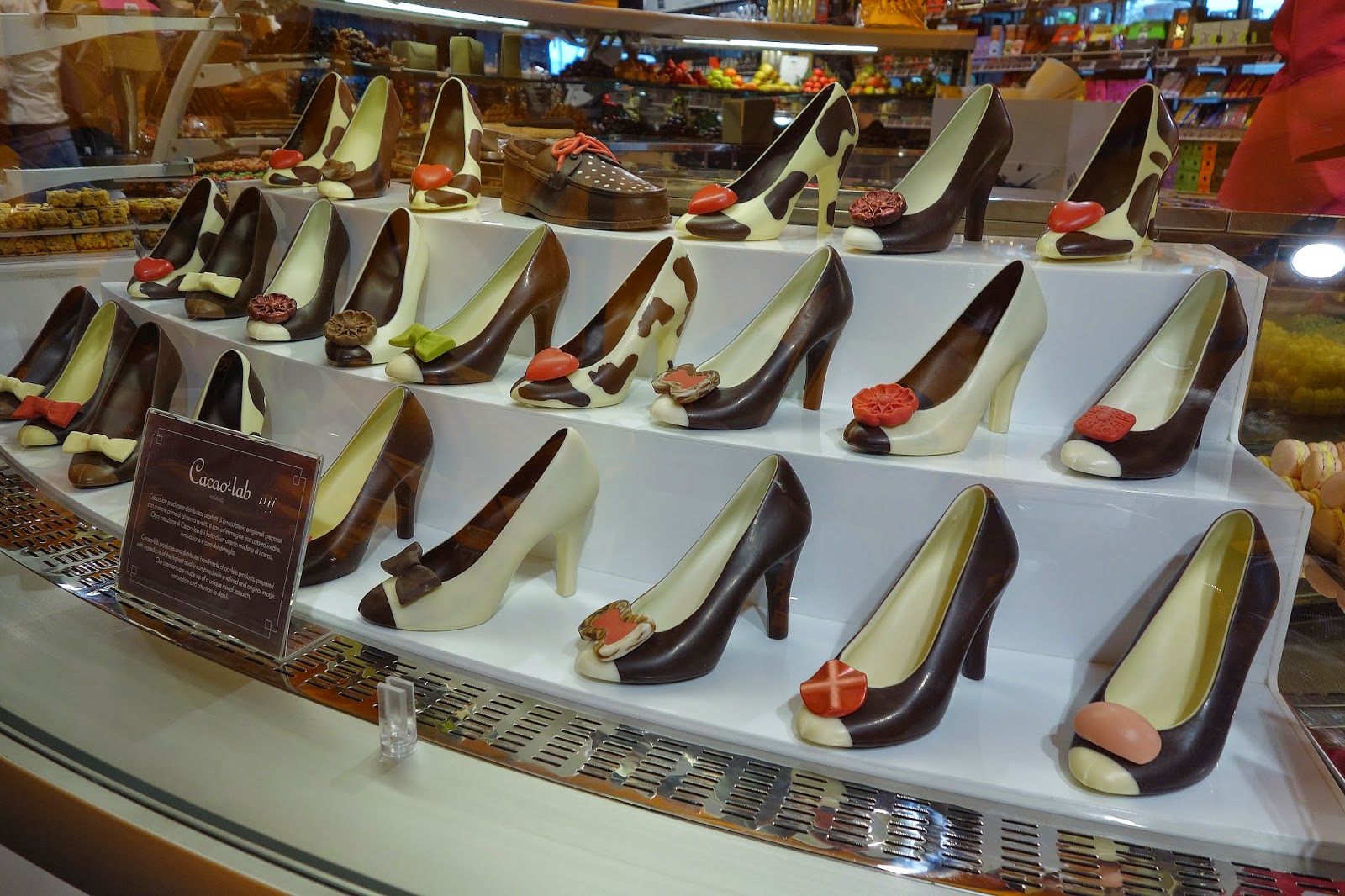 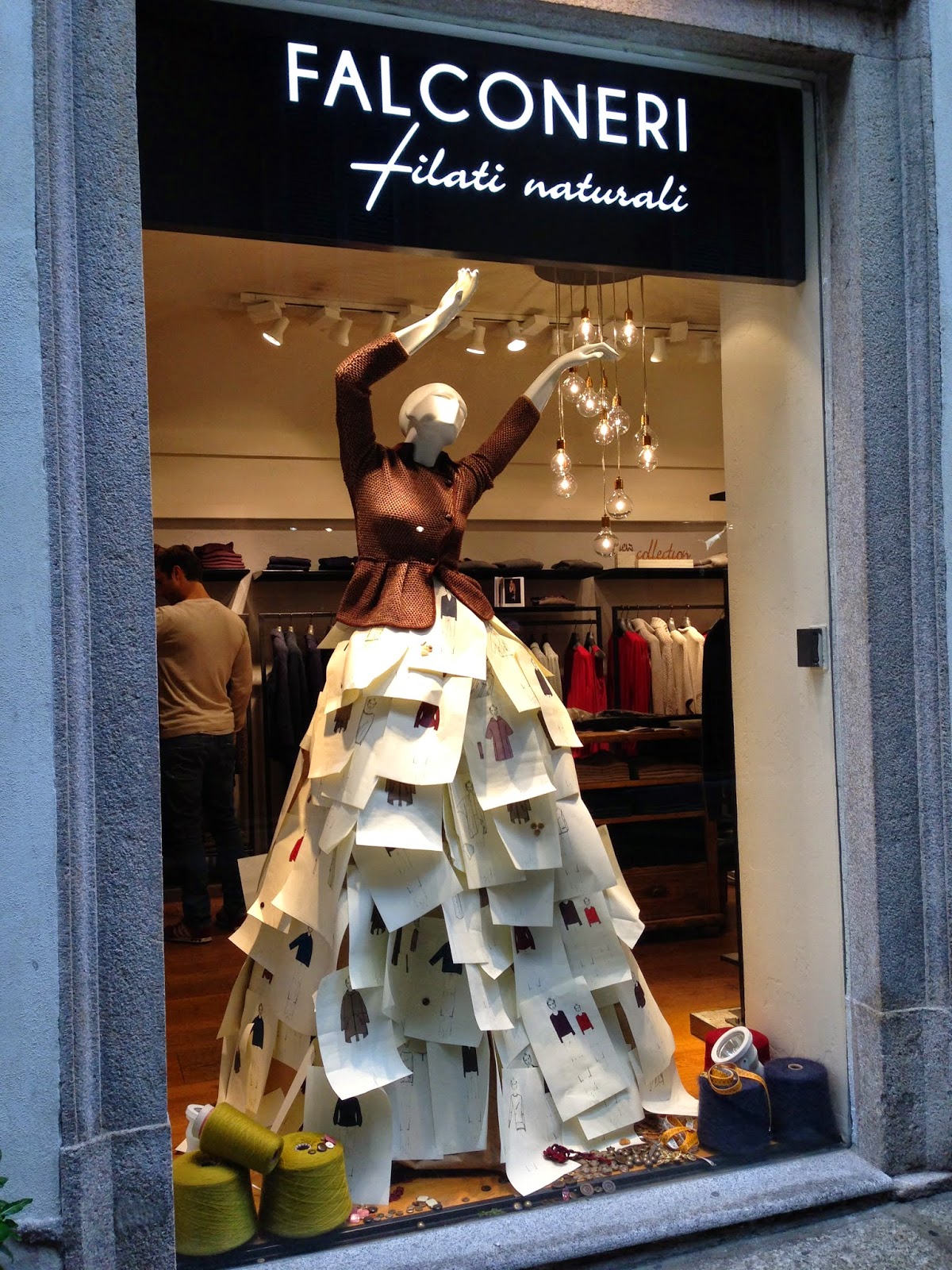 The section on expenses in my 1904 Baedeker’s Guide to Italy advises, “When ladies are of the party the expenses are generally greater.” One hundred ten years later nothing has changed.