By
judithworks
on
One of my favorite day trips from Rome is heading north into the dreamy scenery of Etruscan country, that area of northern Lazio and bits of Tuscany and Umbria where the Etruscans once roamed. 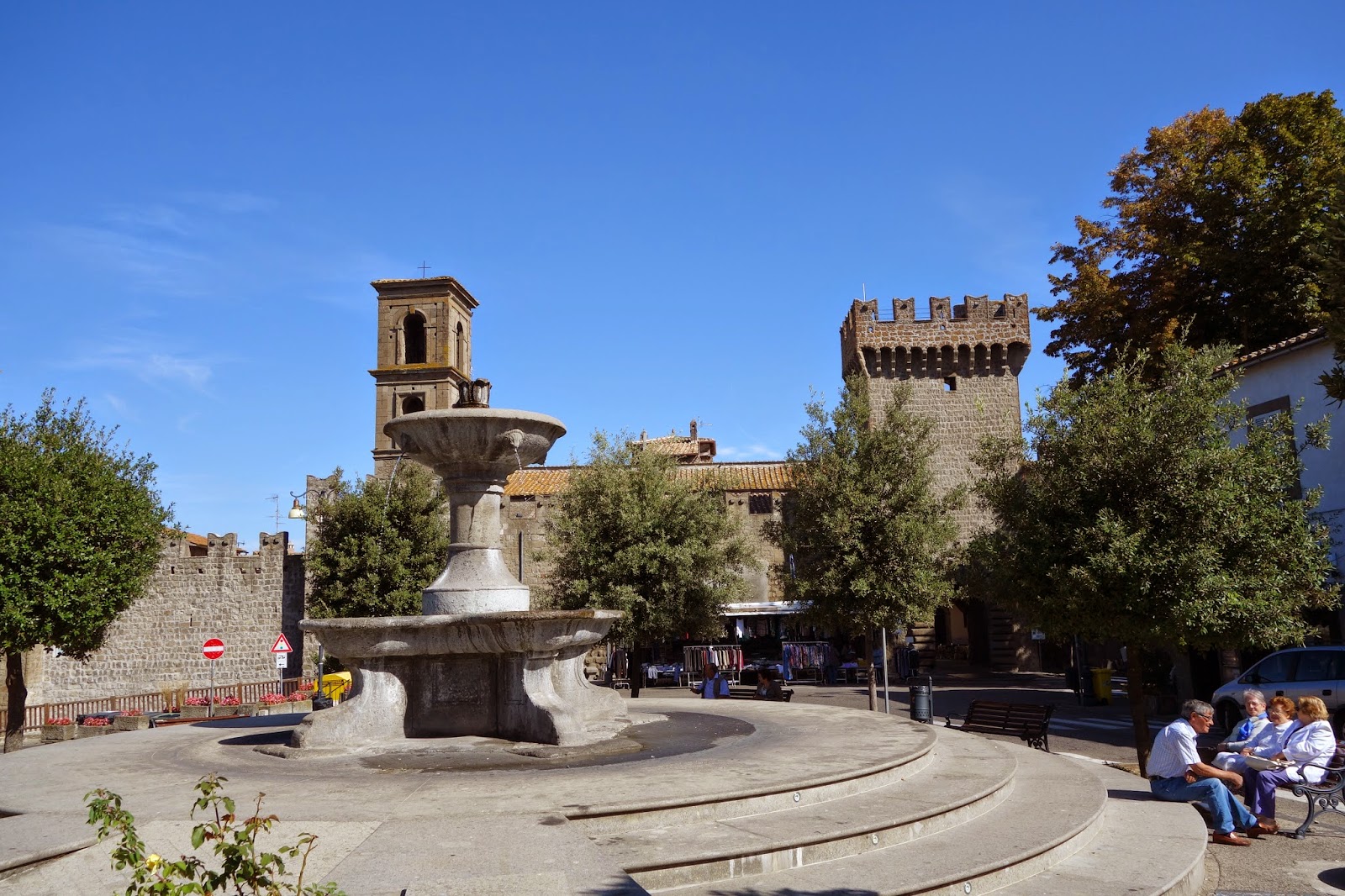 Our first stop one summer day was Vitorchiano a tiny town, set on a cliff between two ravines. It was originally a Roman fort and the inhabitants haven’t forgotten their history – they still regard themselves as Roman. We paused at a local market set up near a fountain to browse the irresistible selection of fruit. 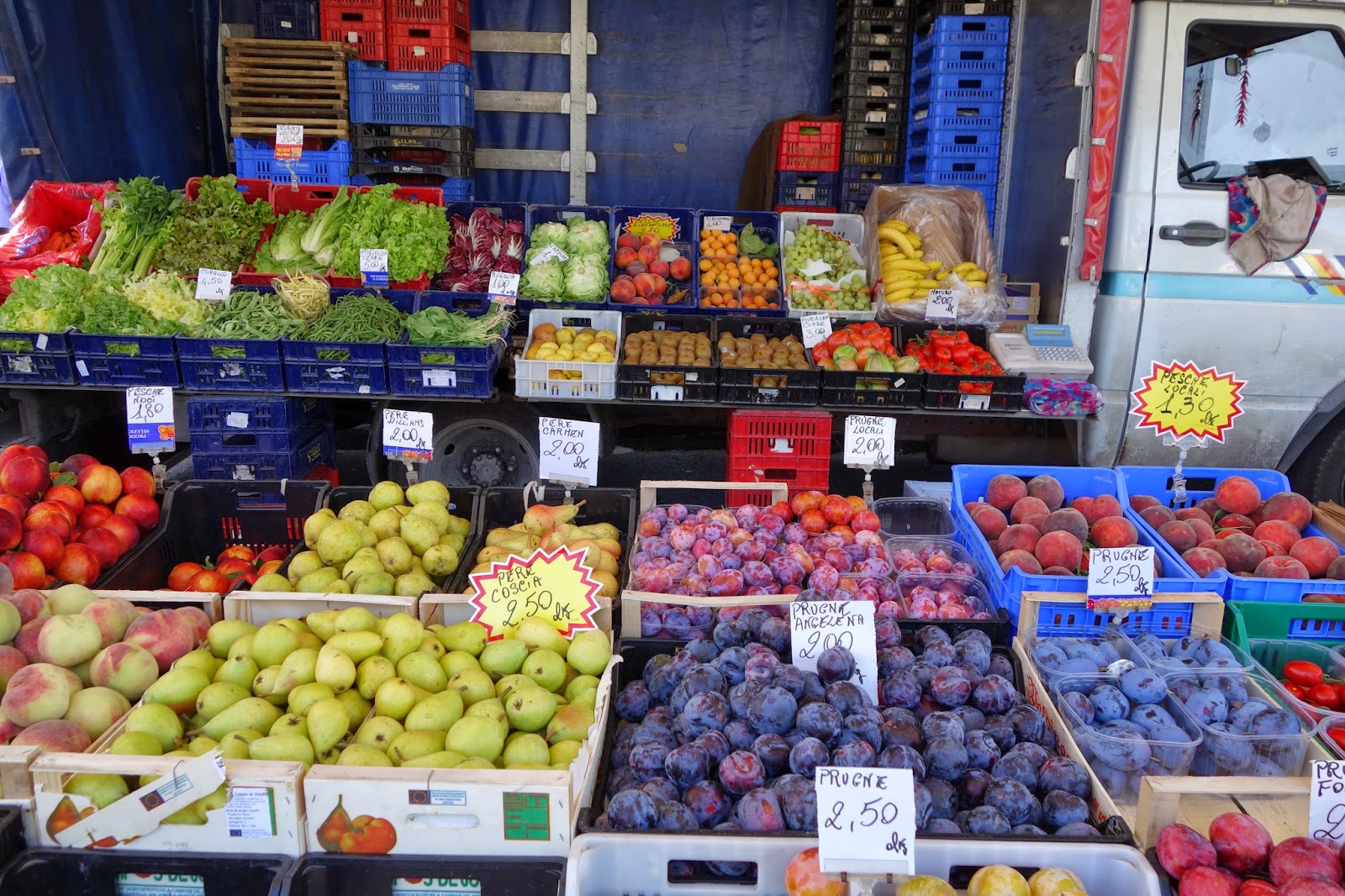 But our pleasure was tempered by an angel casting its shadow on the names of the dead from World War I, a typical melancholy reminder of Italy’s troubled past found in every town. 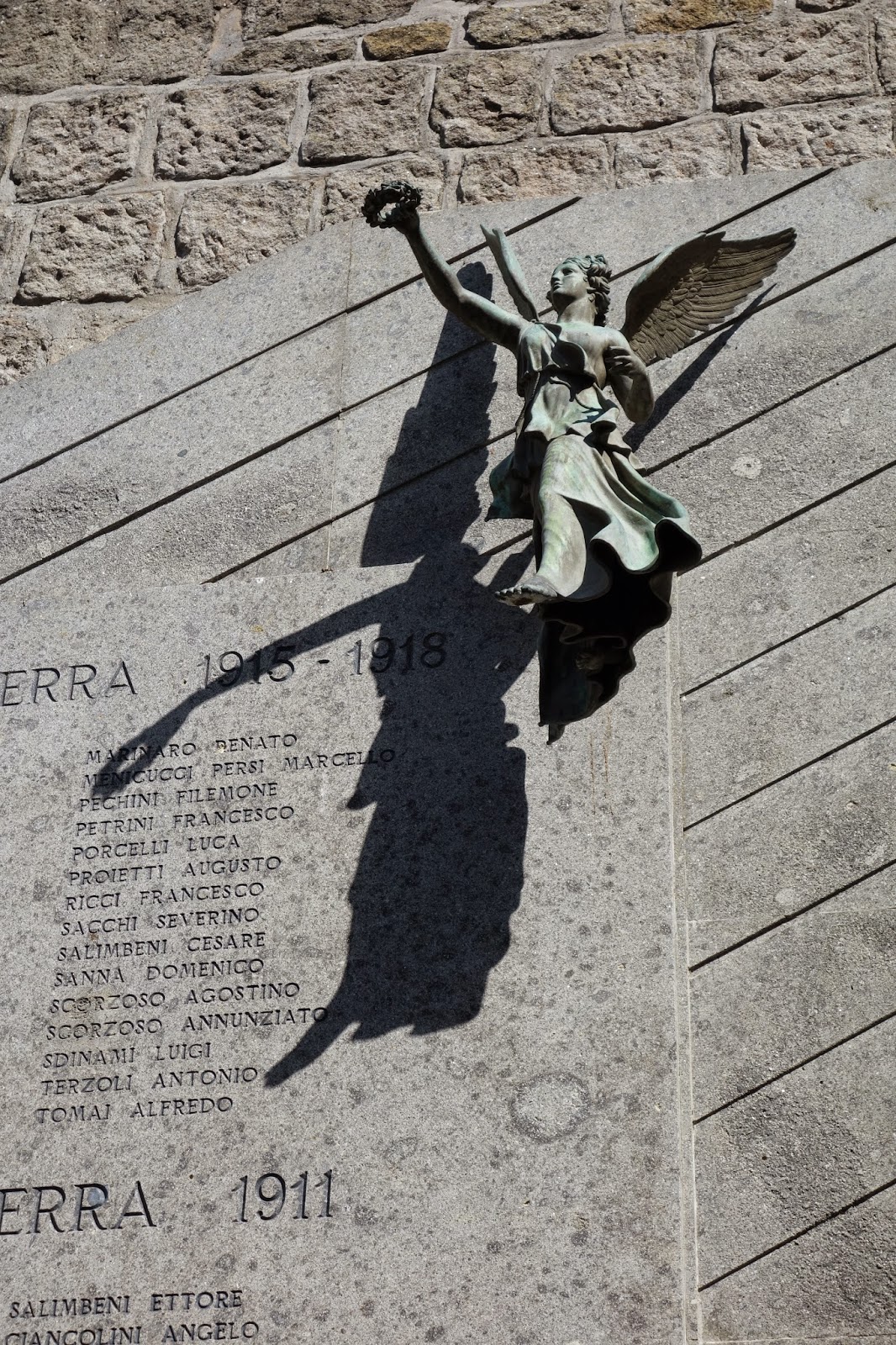 After passing through the ancient city walls we poked around in churches and shops, enjoying a gelato before heading down the steep and winding road toward Vetralla, our destination. 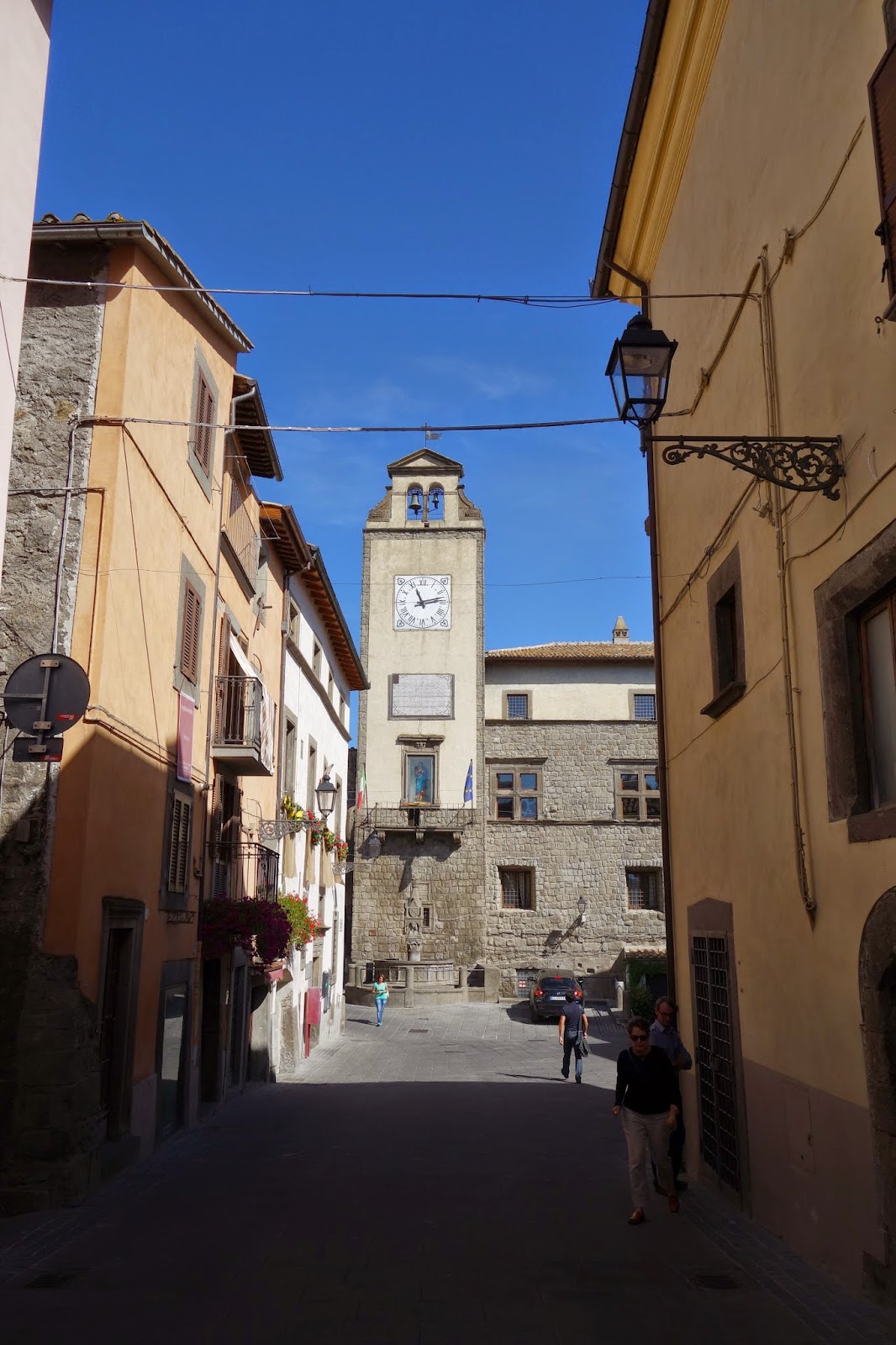 An odd sight confronted us by the side of the road as we zipped by: a statue in the style of those from Easter Island. If anyone can explain this mystery please let me know.
My friend in Vetralla, Mary Jane Cryan, is a long-time resident of the small city, and writer of the popular blog, Fifty Years in Italy (50yearsinitaly.blogspot.com). Vetralla has a curious history. Part of the Etruscan triangle of Tarquinia and Tuscania, some inhabitants still have Etruscan DNA, but it is also the only place in the world outside the UK that was under the “protection” of the English crown as proclaimed by Henry VIII in 1512, followed by a long association with the exiled Stuart monarchy in the 1770s. It is interesting to contemplate what would happen if Italy and the UK went to war. Would Margaret Thatcher have sent in the troops? 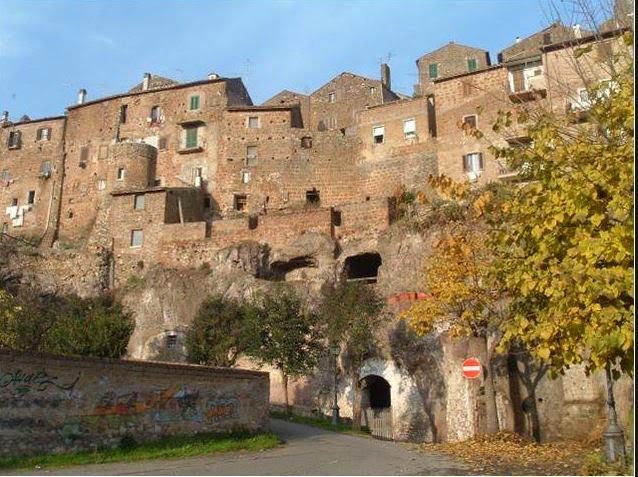 Ms. Cryan lives in an enormous apartment in one of the Renaissance palazzi fronting the ancient Roman road, the Via Cassia that runs down the middle of town. Vetralla is also set high on a cliff like Vitorchiano and most other towns in the area, and as typical, the back sides of most of the buildings loom over the rich farmland below. Her splendid apartment is filled with books and memorabilia, but it is the terrace, with its sweeping views, that makes the home a place of enchantment. 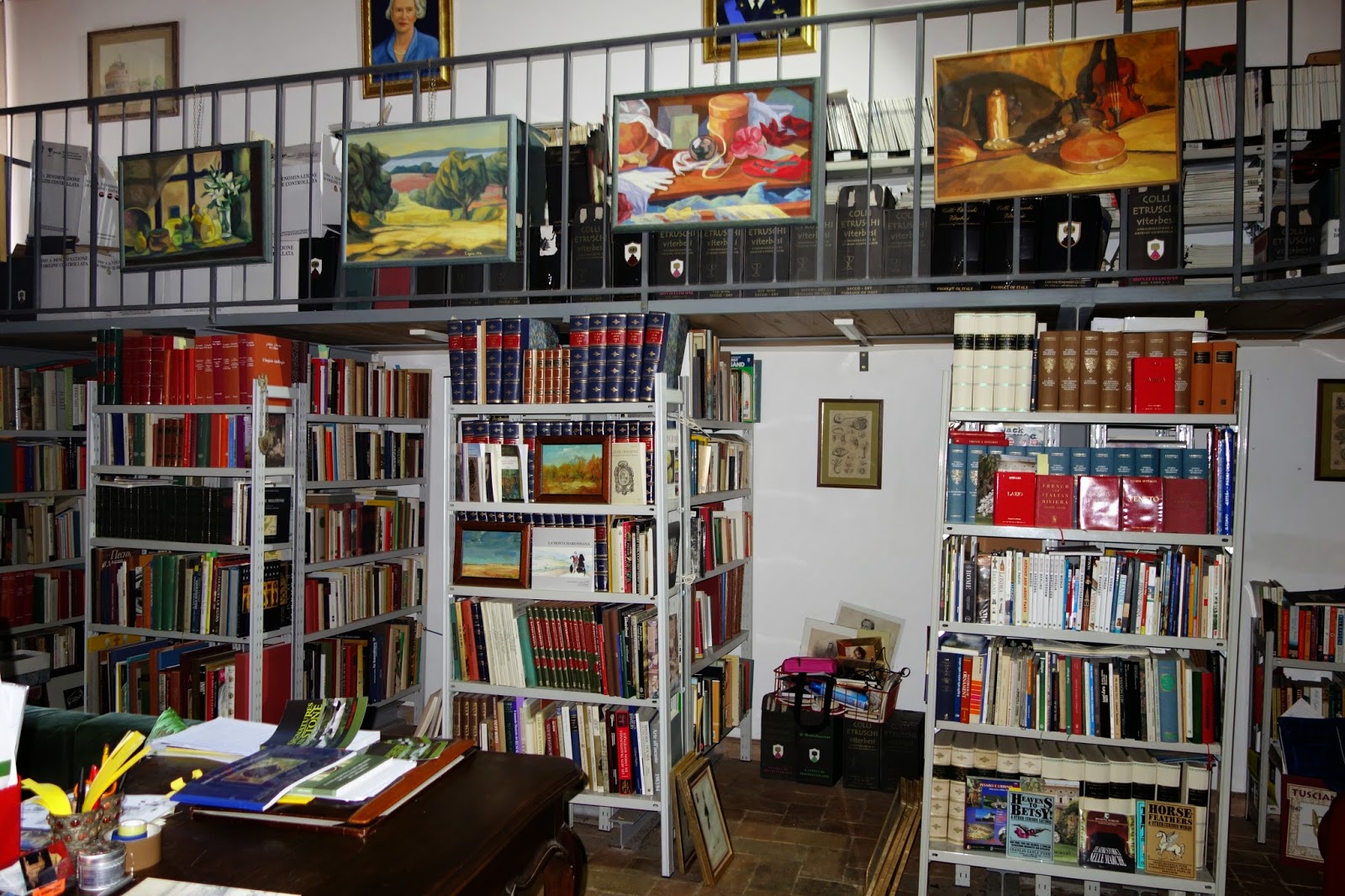 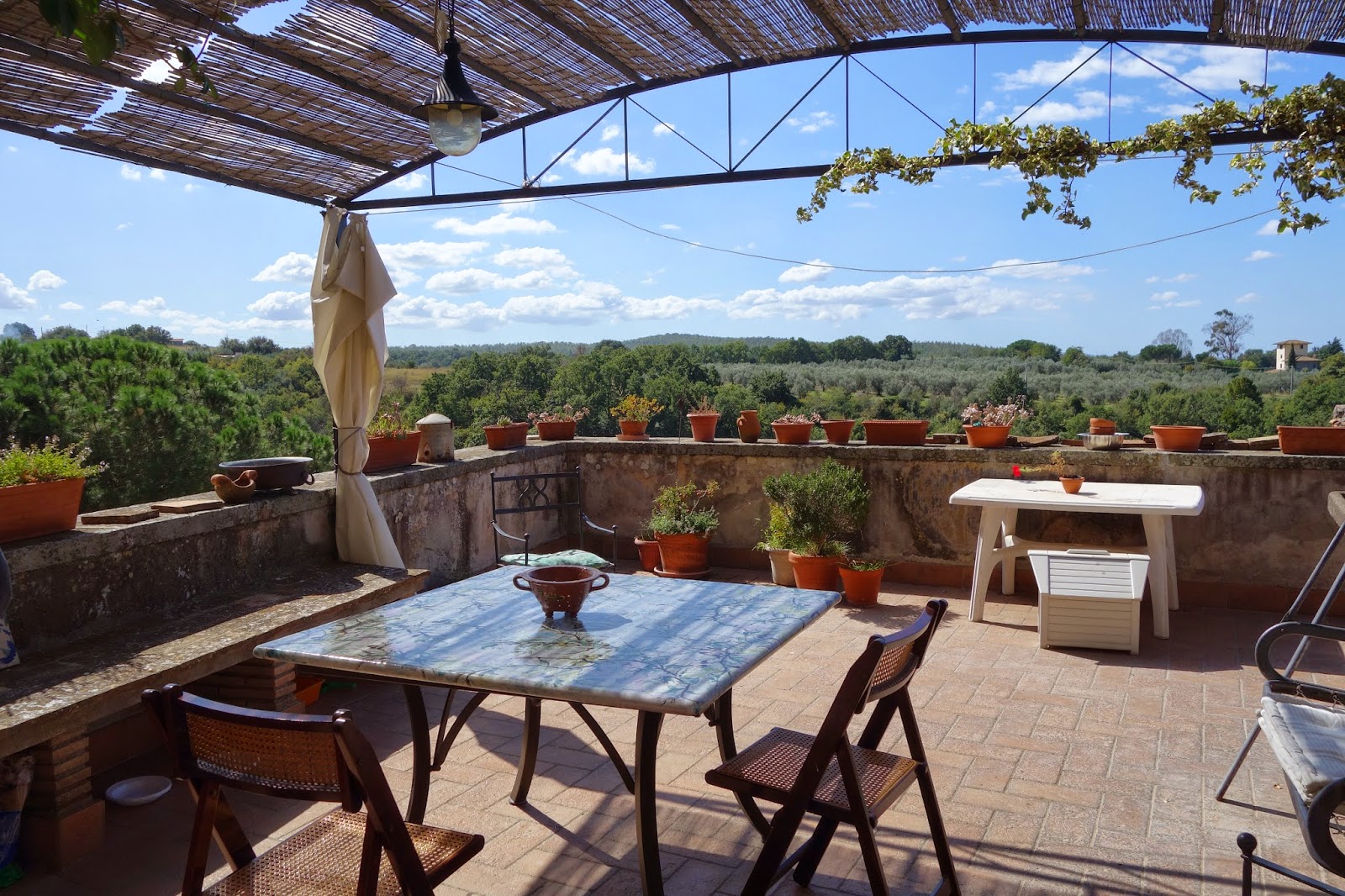 While we sat in the sun the talk naturally turned to food. (Is there any conversation in Italy that doesn’t include food?) Mary Jane mentioned that a friend, Fulvio Ferri, had recently published a cookbook filled with family recipes. Unable to resist an addition to my Italian collection we came home with Olio e Ricordi in Cucina – loosely translated as Grandmother’s Recipes, along with a copy of Mary Jane’s latest book, Etruria, Travel, History and Itineraries in Central Italy. If you are interested in either book you can go to www.elegantetruria.com.
Although we don’t have olive oil from Vetralla in Seattle we tried out some of the recipes. We particularly liked the one for roast potatoes, Patate al Forno con Rosmarino o Finocchio, often found on Italian menus but not so often in cookbooks:
Here’s our take on the recipe which serves 4 – 6:
10 medium-size thin-skinned boiling potatoes
Sprigs of fresh rosemary (we didn’t use fennel)
2-3 cloves of garlic
Salt & pepper to taste
Extra virgin olive oil
Pre-heat oven to 360 F or 180 C.
Peel potatoes and put in cold water so they don’t darken.
Place the mixture of oil, salt, pepper, finely-chopped rosemary and garlic in a bowl large enough to toss the potatoes.
Dry potatoes, cut into wedges one inch thick, coat with the mixture, and arrange in a single layer on non-stick baking pan.
Bake until just tender (varies from 30 minutes to an hour).
Crisp the potatoes for a few minutes by turning on the oven fan.
Serve hot. And plan another trip to Italy!
Copyrite Judith Works. All photos by author except for view of Vetralla by Mary Jane Cryan