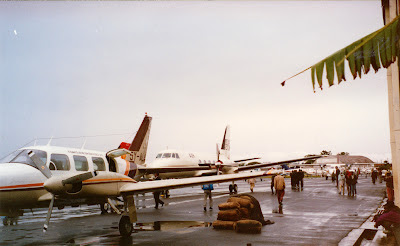 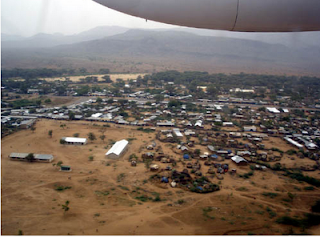 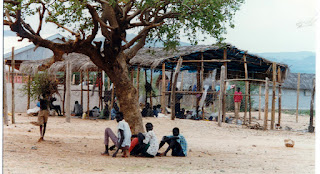 After an hour’s flight near the Rift Valley, we landed on a runway where some of the parked planes had bullet holes to show for their efforts to provide aid in the protracted conflict in southern Sudan. The settlement, no more than 20 miles from the Sudanese border, was populated by the native Turkana tribe, Sudanese refugees, termite mounds, herds of donkeys and goats, and aid organization offices. Turkana people wearing only a few beads sat in front of their grass covered huts, without interest in us. Dispirited refugees squatted in insufficient shade provided by stick-roofed shelters.

The isolated airstrip was used to air drop food to desperate Christian and animist Sudanese under attack from the Moslem Janjaweed militia. This militia, made up of nomadic tribesmen, was supported by the Sudanese government who used them as a proxy to drive out the sedentary farming population and force them to surrender the land rich in resources. Janjaweed means “devils on horseback,” an apt name for the massacres and rapes they perpetrated. The militia sometimes pursued aid workers along with the rebels. Another bloody game in which the innocent starved. 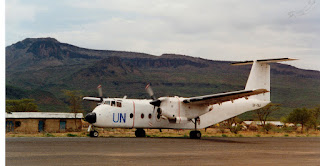 The airport consisted of a fuel dump, small control tower and several rub halls, huge tents that aid agencies use to store emergency supplies. The tents held tins of cooking oil and grain and legumes ready to be triple bagged and loaded on an old twin engine Canadian Buffalo airplane, a design known for its ability to take off and land on short airstrips. Sweating workers were slinging 120 pound sacks of food into the plane’s cargo area. The sacks were to be air-dropped as the plane flew at an altitude of only 1600 feet to help ensure the bags didn’t break on landing. Food aid monitors had already marked drop points on the other side of the border awaiting the delivery. Village headmen were ready to gather the bags and oversee distribution to women who had registered their families, the amount doled out depending on the family size and ages. Did I want to go on a flight? Yes I did, but with no authorization from the Sudanese authorities, it was too much of a chance. Instead, I watched the plane lumber down the airstrip and take off over the brush covered hills to return empty an hour or so later. 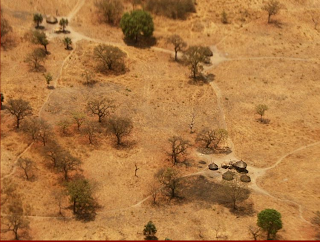 Lunch was served in a cafeteria used by the aid workers where Western food was supplemented by local food for the Kenyans. I was hungry after the early start and scooped up spicy goat stew, tough but tasty. The aid workers’ simple accommodations had insect ridden thatch-roof huts and communal showers. No TV. Only the most adventurous and self-sufficient took these jobs and even they didn’t stay more than a year or two. Part of the reason for my trip was to talk to these workers to assess the need for expanding our counseling service which attempted to assist them in coping with the rigorous and dangerous conditions. A need for the program was obvious when women food aid monitors told me about running for their lives and hiding in the scrub for days to escape the Janjaweed marauders before being rescued.
Mission accomplished and dusk falling, I was glad to get on the 20-passenger plane for the flight back to Nairobi. Fellow passengers on the homebound leg were a few UN workers and several extremely tall, thin and blue-black Sudanese, silent and dignified in their white robes and turbans.
My hotel was the Norfolk, with little plaques on some room doors where Teddy Roosevelt and Ernest Hemmingway had slept, although Ernest was said to have spent most of his time in the bar. I sat on the veranda in the early evening watching business people relaxing over bottles of Tusker beer and vans rolling up, sliding open their doors and gathering up Americans wearing their brand-new safari outfits. They were all trying to look like Robert Redford in Out of Africa as they ventured out to the bush for a few days’ sightseeing in the game parks. Across the street, students were loudly protesting some issues at the nearby university. The power went out. 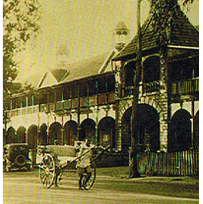 The breakfast buffet the next morning was extravagant in its variety and I assumed the fruit had all been carefully washed. Within two hours I was vomiting uncontrollably and having the DTs while lying in the UN infirmary. Although the doctor wasn’t much impressed I had visions of a lonely death while being besieged by imaginary wild animals and ghosts. So much for my brave African adventure. After the more unpleasant symptoms abated, the office director’s wife hauled me off to their home where I slept off the remainder of the problem, dozing with the faint smoke of the mosquito coil keeping me company.
My rescuers were hosting a party that evening. I managed to pull myself together and lurch out into the garden to make a late appearance. The house was a fortress: guards with their leashed German shepherds, broken glass topping the garden walls and bars on the windows. Talk at the party turned to the dangers in Nairobi where the chief of security for the UN had been murdered in a carjacking. Out of the corner of my eye I could see two men leaping over a hedge. Good God, were we going to be attacked? No, it was the guards on patrol.
The next evening, I waited for an old unmarked taxi to take me to the airport. It was too dangerous for a UN vehicle to drive the route after dark due to the many carjackings of their desirable nearly new SUVs. The airport was in disrepair. Empty sockets stared at me in place of ripped out video monitors. The flight back to the bounty and peace of Rome gave me time to think about the unhappy lives of those caught in the middle of never-ending violence.
Excerpt from Coins in the Fountain
Photo of Sudan courtesy BBC