By
judithworks
on
The weather at home was cold and damp. We wanted to go someplace warm and dry. On my lunch hour I contemplated the travel brochures displayed in the window of a travel agency next door to my office. Mexico, the Caribbean…or where? Lured inside by the thought of sunshine, I spotted the agent who looked like a pixie with her gamin haircut. She wore a tunic and brown hose with little green suede shoes that curled up at the toes. I asked her for some ideas, expecting from her appearance to be sent to rainy Ireland. Instead, she said a stack of flyers for a tour of Israel had recently arrived. “Would you like one?” “Why not?”
The itinerary of the two week tour covered all the tiny country from the Lebanese border and Golan Heights to the Red Sea. Tipping the scales in favor was the opportunity to see the cradle of Christianity and a day trip to ancient St. Catherine’s Monastery, home of the Burning Bush, located near the tip of the Egyptian Sinai Peninsula. We had been in Egypt several years before to see the standard sights but hadn’t had the time to leave the Nile Valley. The next lunch break I handed over my credit card.

We landed in Tel Aviv at dawn. We had hours to start looking around before meeting the tour group; not a minute to waste. Buildings from the 1930s designed in the Bauhaus International style were glowing white in the morning sun. Awnings over the stalls in the Carmel Market sheltered piles of fresh fruit and vegetables and other odds and ends typical of the Levant – spices, nuts, dried fruit and olives in burlap sacks. We wandered to the ancient town of Jaffa. The Greeks believed that Perseus on his winged horse rescued Andromeda from a rock in the harbor. In Biblical tradition, it was founded by Noah’s son Japheth after the Flood and was where Jonah was cast ashore after his adventure with the whale. As part of its great trading history, it served as the port for the cedars of Lebanon used in the construction of Solomon’s Temple. By the time we arrived it was a picturesque suburb filled with souvenir shops, a flea market and restaurants for tourists. 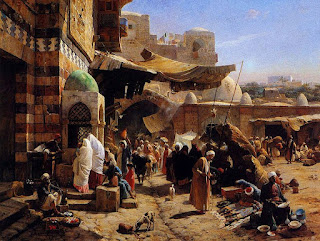 When our group met in the lobby, our guide introduced herself as Rivka. Fluent in Arabic along with Hebrew, Swedish and English, she had served as a translator for prisoner exchanges after wars with Egypt and was an expert in local history. Her flock was an odd assortment of Americans all with different motivations for the trip: elderly Jews who would stay on after the tour to try to find their relatives, young non-observant Jews wanting to see Israel with the ease of a tour, a couple on their honeymoon who dragged their new Burberry coats along in the heat everywhere they went, an  elderly Sunday school teacher desperately trying to understand the New Testament about which he seemed to know nothing, the nominally Christian  like ourselves, and a youngish man in brown polyester with shifty eyes and cowboy boots who lurked on the fringe and kept to himself. Each of us would incorporate our own backgrounds and motivations to see Israel through different lenses.
The next morning our tour commenced: baggage out by 7 a.m., group on the bus by eight.  The complex, entangled layers of history were immediately on display; a palimpsest where one civilization rubbed out another. Hatred and violence were a constant, never-ending theme at every site. We tramped through Iron-age sites like tiny Meggido (Armageddon), Roman ruins, Byzantine churches and their mosaics, Crusader castles, ancient synagogues, mosques and churches and those of more recent times. Our Sunday school teacher entertained us regularly with, “I didn’t know that!!”  The man in brown polyester sat in the back of the bus, alone. 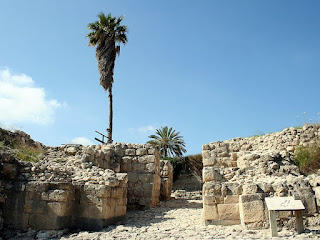 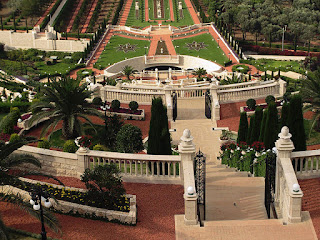 In Haifa, the Persian flower gardens of the oft-persecuted Baha’i sect overlooked the site where a few boats managed to bring Jews to the Promised Land after running the British blockade after World War II. We stopped at the Lebanese border where a sign painted on a rock said Beirut 120 km, Jerusalem 205 km. That was the physical distance, but the mental distance seemed more like from there to the moon. We were near the entrance to a railroad tunnel, part of the tracks built in the Ottoman era. I expected Lawrence of Arabia to ride out leading his Arab insurgents on their stallions. Instead, a wedding was in process. The groom was attended by his fellow soldiers dressed in battle fatigues and carrying Uzis; the bride was in a shiny white gown covered in ruffles and flourishes. We joined in wishing them well while wondering about their future.

Back in the bus, the TV was turned on. CNN was showing pictures of tanks being hauled on low-boys toward some threatened destination. I looked out the window:  there were the very tanks. Rivka assured us there was no problem, but our evening’s destination, a kibbutz, was in the same direction. On arrival we were treated to a view of their bomb shelter and a children’s playground with a half-buried Syrian MIG where it came to rest after being shot down. The current shooting was near the next kibbutz to the north. We were restless thinking about the stress of living in such an unstable environment and worrying that the current fighting might come our way. 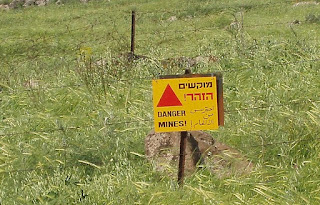 More Middle-East politics confronted us when we viewed Israel from the Golan Heights. We drove half-way up the mountains on a road lined with signs warning of landmines. We stopped at a viewpoint. Above us were communications towers and below us was the country. The Jordan River looked to be a creek. Nearby was an Israeli monument to the fallen, small pebbles of remembrance instead of flowers scattered on the flat surface. Wreaths made of dried grasses and wildflowers hung on black steel anti-tank barricades.

Safed, the center of Jewish mysticism was next on our itinerary. On the way we passed burned out buses and trucks from the 1947 war when Palestinians were forced out. Our strange cowboy-booted companion bought piles of rams’ horns and, in an uncharacteristic burst of volubility, told us that they were for a new sect he had founded in prison. No one could think of anything to say other than, “that’s interesting,” while picturing men in black and white stripes blowing on the horns in an exercise yard. Not wanting rams’ horns, I spotted a copper coffee pot that I thought had Arabic calligraphy as a decoration. After hearing the price, I countered with a slightly lower offer. The vendor looked at me and said, “If you want it, lady, pay the price.” I meekly paid. Later I looked more closely at my purchase – it wasn’t calligraphy, it was a dragon and the spout when turned upside down was an elephant’s head. Where did this object come from? Was it fake, was it real from some exotic place. Who knows? 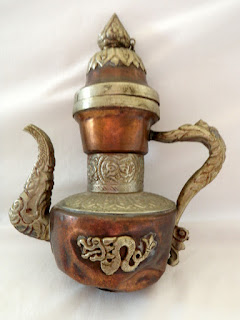 Nazareth has an enormous Franciscan church honoring the Virgin Mary with the nave lined with gigantic mosaics picturing her in the costume of the country that donated the panel. The Japanese donation was eye-catching with Mary in a kimono. Rather than view the church, two elderly Jews wandered off. We waited on the bus while Rivka searched the narrow streets and passages. By the time she found them they were hysterical with fear at being lost among local Palestinians. She led them back to the bus where they sobbed and comforted each other on the way to our next stop.
We arrived in golden-hued Jerusalem, the medieval center of the world and the holy city of various aspects of God. It was a Friday; the Jewish Sabbath started at sundown. 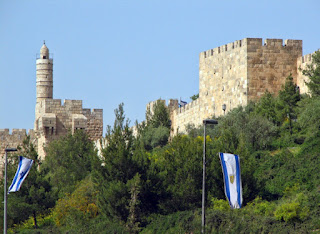