By
judithworks
on
We had been surprised when our guide, Rivka, launched into a vigorous tirade about the ultra Orthodox as soon as the tour started. She claimed their women did nothing but have babies while the men lived on State handouts while they studied the Talmud in a yeshiva. The most radical denied the existence of the State and were exempt from serving in the army she told us with disgust. It was apparent that even among those of her religion there was plenty of tension. We let her comments pass unquestioned but when we arrived at our Jerusalem hotel on a Friday afternoon we hurried to the ultra-Orthodox district, Mea Shearim, to see who she was talking about. Near the entrance to the quarter signs advised women to cover up for modesty. I complied.

It wasn’t long before the Sabbath warning horn sounded. Men, wearing high boots and and caftans, held on to their fur hats as they hurried home. The large hats were brimmed with luxurious sable or martin. Even in a city of religious garb, cassocks, birettas and cowls, head scarves, crocheted caps, yarmulkes, turbans and prayer shawls, their appearance was otherworldly, as if people from16th century shtetls in dank Poland had suddenly been transported to the sun and heat of a land of olive trees and cypresses. A little boy, one hand holding his father’s and sucking his other thumb as they headed for home, looked serious and pale with his red hair dropping in a shoulder length curl on each side of his ears. He frowned at us, nosy interlopers that we were.

The next day we rambled through crowded streets of the Old City absorbing the atmosphere within the ancient walls. Beautiful domes and spires reaching into the blue sky belied the fight for religious or temporal power going on at ground level. Christians dragged or carried large wooden crosses down the narrow Via Dolorosa. It was packed with other less overt pilgrims with Bibles in hand; tourists in brief tee-shirts, shorts and baseball caps; merchants screaming our their wares; and the Orthodox, heads down and hiding under their prayer shawls, trying to make their way to the Wailing Wall. If someone had shouted “fire,” or more likely, used a slingshot to cast a stone like David against Goliath, we would have been trampled to death in a stampede. In a small plaza, we came across a car with the windows covered with paper. The police were standing around looking at it. A bomb, a body? Just another day in Israel. 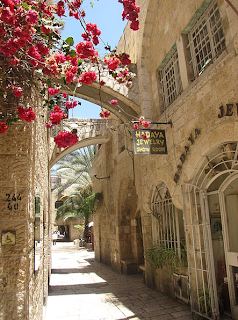 The Arab quarter had stalls selling clothing, dried beans and fruit, sandals, and cheap videos. Idle youths propped up the walls. Elderly men with old suit jackets over their white robes, checked headdresses held in place with a cord, worry beads and canes led loaded donkeys. Women, in their long gowns and headscarves, hurried along as they did their shopping, children in tow. 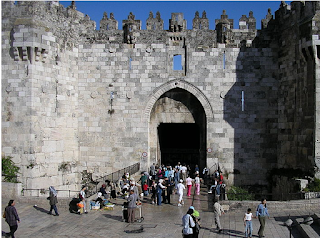 We left the Old City by the Damascus Gate. An Israeli soldier with an Uzi sat in the small window overlooking the square. Other soldiers screamed at the Palestinians or drove through the thick crowds in their military vehicles with little care for anyone’s safety, blowing their horns and waving guns.  Our goal was the Rockefeller Museum, located on the site where Crusaders stormed the city in 1099. No one wanted to let us in until our motives were ascertained. We looked innocent although a guard shadowed us as we wandered the rooms empty of visitors but filled with artifacts from every period of history. On the way out we noticed that the roof was crammed with antennae of every sort, no doubt having nothing to do with artifacts from the prehistoric era. 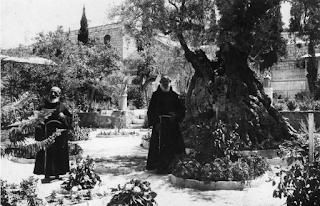 We walked to the Garden of Gethsemane. It was the only peaceful site we found even though sirens sounded in the distance and a slight smell of tear gas wafted near the giant olive trees in the beautiful garden, the setting for betrayal. 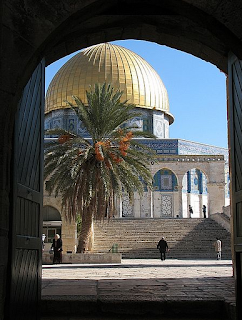 A temporary lull in the perpetual contest for power allowed a visit to the Temple Mount where Solomon’s Temple housed the Ark of the Covenant until it was destroyed in 587 BC by Nebuchadnezzar.  Nothing is left of that temple although there are a few remains of the Second Temple built by Herod. The area fell into ruin until the arrival of the Moslems in AD 638. They cleaned it up and built two famous mosques. The mosaic-encrusted Dome of the Rock, was designed by Christian architects – a rare example of ecumenism. The golden-domed octagonal building surrounds a rock where Abraham prepared to sacrifice his son Isaac and Mohammed temporarily ascended into heaven astride his horse. The King of Jordan was assassinated there by fanatics in 1951. The silver-domed Al-Aqsa Mosque nearby was built on the ruins of a Byzantine basilica.  Some years later it was damaged by gunfire and then a crazed Australian tried to burn it down.

But the only violence that we wanted to see was not in evidence:  the dark and dreary Church of the Holy Sepulcher where priests and monks from six Christian communities regularly battle it out with brooms over who controls what piece of the building. The Franciscans, Greek Orthodox, Ethiopians, Copts, Armenians and Syrians were otherwise occupied that day as we tried to think holy thoughts in a circus atmosphere with dozens of guides herding their noisy charges around the sacred monument. Jesus would have turned over in his grave, if He had one.
Near the King David Hotel, where Jewish terrorists blew up one wing in 1946 killing many British soldiers, shop windows were loaded with silver menorahs and other Jewish ritual objects. Next to the Dallas Kosher Oriental “Restaurent” with a cowboy on a horse painted on their window, we found a small shop with old coins, Roman glass and other antiquities. Resting by the door was a basket containing partial pieces of opalescent glass. Lured by blue green patina, we picked up a piece and bought it for a small sum. It was the top half of a bottle or a jar. When we looked at it more closely we could see that it was packed with ash from some ancient disaster. 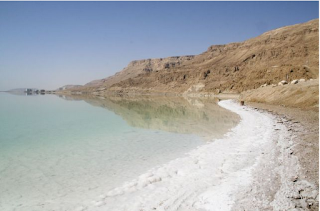 Down, down to the Dead Sea, the lowest place on earth. We shared the ever-shrinking Sea with war veterans covered with scars trying to ease their aches in the greasy-feeling mineral warmth of the buoyant water. Masada’s rocky outcrop, where Herod’s fortress once stood and the Zealots held out against the Romans, loomed over the Sea. As we rode to the top in a cable car, soldiers in training were running up the steep path. Pieces of Roman columns lay on the ground. Roman numerals, still clear, showed which piece should be connected to its mate. When we looked over the sides of the fortress, the desert soil revealed the outline of Roman encampments and the ramp used by their army in AD 73 to end the three-year siege. When they entered the ruins, the Romans found 960 bodies of the Jewish Zealots who died rather than submit to Rome.

Worn out with an overdose of violent history, we were happy to head to Eliat, Israel’s Red Sea port and playground, stopping at the purported site of King Solomon’s mines where Egyptians mined copper as early as 3000 BC, long before Solomon existed. We climbed the high rocks and then, back at the bus, watched as several of our tour group overestimated their climbing abilities, unable to find their way down. Time was passing and the sun was setting. Glenn climbed up to lead them back from their mini adventure.