Before dawn the next morning we drove the short distance to the Egyptian border. Relations were temporarily good so we didn’t expect any problems. We filed off the bus and were inspected, screened, stamped and transferred to an Egyptian bus. Then we sat waiting. Forty-five minutes later the last passenger climbed on. It was our cowboy, who was looking a bit paler than usual. Silently he headed for the back of the bus, his usual position. A guide and another man took the front seats across from the driver. We were finally on our way. Our first stop was the Hilton Hotel at Taba (bombed out a few years’ later with heavy loss of life) for coffee. Off the coast was a tiny island crowned with a 12th castle, marking the most southerly outpost of the short-lived Christian Kingdom of Jerusalem before Salah ad-Din pushed them out. An Israeli guidebook said that it was a Crusader castle; the Egyptians said that it was Moslem. Whoever built it provided a dramatic sight for later arrivals. 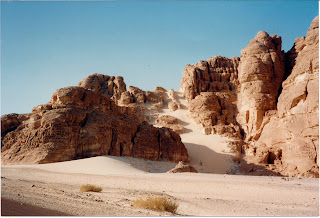 The unidentified man from the front of the bus joined us while we sipped cardamom-flavored coffee. We chatted about our previous trip to Egypt. He allowed that he was our official minder for the day trip, working for the Egyptian security services. Friendly and talkative, he told us about the cowboy. The border guards didn’t like his looks, no surprise, and decided to work him over. Every time he went through the scanner, he set it off. Piece by piece they made him strip until they reluctently relented after recognizing that it was only the steel-shanks in his cowboy boots setting off the alarm. 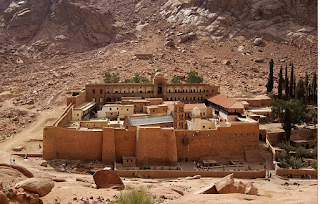 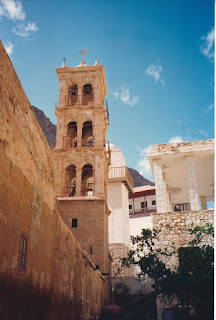 We crossed the barren desert to our goal, the ancient monastery of St. Catherine, founded in 325 by Constantine’s mother, St. Helena (who also found the True Cross in the church of the Holy Sepulcher). It was rebuilt in 548 by Justinian as a fortified monastery. An oasis set in the rocks at the foot of Mount of Moses, Jebel Musa, it was a place of peace, with Muslims and Greek Orthodox co-existing. One writer called the area “God-trodden,” and it seemed an apt description of the isolated area. The carved entrance doors made of Cedar of Lebanon have been used by uncounted pilgrims since the sixth century. Inside the grounds is a mosque for the Bedouins along with the famous flourishing green bush. It is said to be a cutting of the original taken from the site where Moses received the Ten Commandments, now the Chapel of the Burning Bush. It isn’t clear what species the Bush is. Some say it is a wild raspberry, others a rose or broom. When there is disagreement about a bush or a castle it is easy to picture all the other intractable disputes over other holy sites. 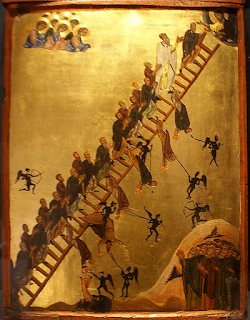 The basilica’s interior is hung with enormous silver chandeliers laden with yellow beeswax candles, votive lamps surmounted with ostrich eggs suspended from the ceiling and ancient icons of incalculable value, some from the time of the monastery’s founding. 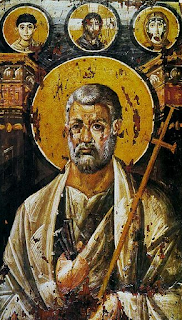 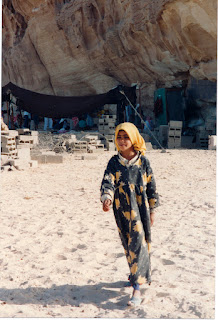 We were sorry to leave and hoped that some day we could return to hike the steep 750 Stairs of Repentance to the top of Jebel Musa to watch a sunrise and repent our sins. But our minder herded us back on the bus for the next big event, “tea with the Bedouins,” a faked tourist attraction but thought-provoking nevertheless with little girls with unkempt hair peeking out from behind rocks to watch us while women stayed out of sight. The  girls eventually crept out and joined the boys. After handing out  the  pens and candies we carried  to give to them, we sat in the sand around a small fire, hoping to avoid some disease from dirty water or hands of the men who prepared tea and poured it in smudged glasses while the flat bread baked in the ashes. When their cooking duties were finished, the men lay on the ground propped up on one elbow smoking in front of a cave stocked with provisions including plastic crates for soft drinks, jerry cans and Adidas carry-alls. Rubber sandals were carelessly discarded in the sand.  Camels rested some distance away near battered Toyota pickups. A beautiful girl dressed in a blue robe with yellow flowers came out to sell some trinkets. She sat in front of the community grocery store – a little turquoise painted cupboard stocked with a few cans of fish, biscuits and other odds and ends. Camel bags hung on one side of the shop and a dish towel on the other. We wondered what these restless people thought of us staring at them and taking pictures. Outwardly they didn’t seem to care, but inwardly? 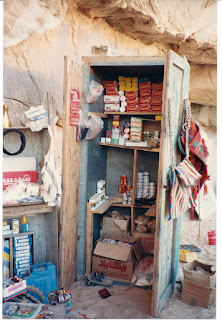 As we left the bus at the border, our minder kindly gave Glenn a paper cornucopia of cardamom flavored coffee as a memento. “Shokran,” I said, using my small store of Arabic words. Cardamom: always to be used in small amounts, always reminding me of this trip, where if the dose is too large the taste is bitter.
The security check leaving Israel was complete with extensive questioning and pat-downs, equally as vigorous as that in London when we had boarded the flight to Tel Aviv. It was six in the morning when we took off on the long trip home. My seatmate on the window side was an elderly bewigged woman loaded with shopping bags. She kept asking in a heavy accent if I knew where Golders Green in London was. I didn’t. The rows across, in front and in back of us were filled with soldiers on leave from their UN peacekeeping duties in the Sinai set up as part of the Camp David Accords. They were determined to enjoy their leave and by 7 a.m. they were drunk and disorderly with joy and gin. It was a long flight from a land of milk and honey where the thought of a peace somehow actually arriving was too remote even to contemplate. 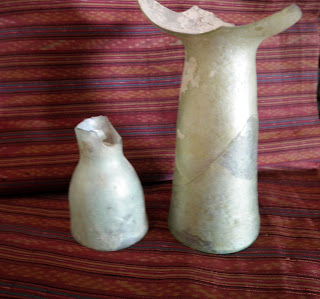 At home, we looked at the larger of the old glass bottle tops. As we turned it over, the ash fell out revealing a small bone – a finger or a toe, or only a bird bone buried for millennia.  How could it have ended up in a Roman glass bottle fragment? We never tried to find out, preferring to leave the mystery unsolved.