By
judithworks
on
The rain had stopped. We waited by a five-passenger plane that was to take us to Zanzibar, Tanzania, a 30-minute flight east from Dar es Salaam, the east African country’s largest city. The pilot showed up late, looking distinctly worse for wear with bags under his eyes and a rumpled uniform. His henna-dyed hair showed grey roots. 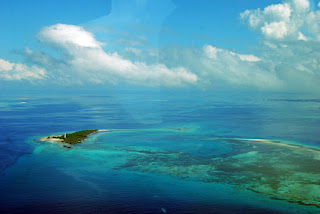 He motioned for us to board, slammed the door shut and fiddled with his instruments. The single engine coughed, then purred and we took off. I looked down at the receding East African city and the clear waters of the Zanzibar Channel and saw the hem of my long silk skirt trailing out alongside the plane. As we stepped onto the tarmac I sighed with relief at being back on terra firma still dressed. Then my husband said, “I hope you didn’t notice the fuel leaking out of the wing.” 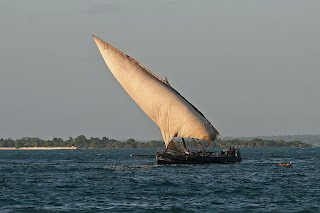 Our hotel, the beautiful Serena, located in historic Stone Town, was a blend of African, Indian and Arab décor in recognition of the ancient trade routes to Oman, Persia and India. Fretwork panels, huge chandeliers, brass studded doors and panels of colored glass graced the lobby and our room. Our balcony overlooked the harbor where dhows with their tattered sails glided by. A vision of the East was before us as we sipped champagne, our welcome drink. 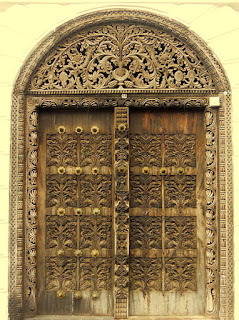 The next day we strolled through the town watching men brewing coffee over tiny charcoal fires, women in their colorful garb and ancient carved doors of Indian design, said to he heavy enough to ward off elephants.


We visited the Anglican cathedral with it’s cross made of the wood from the tree where the explorer David Livingstone died and the heartbreaking memorial to the nameless slaves who had been sold nearby until the trade was ended in 1883. 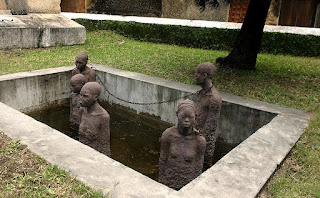 One evening we walked to dinner at Emerson House. The hotel, originally built in the 1820s as an Omani palace, was enlarged 50 years later to add several floors in Anglo-Indian style, complete with Gothic arches and Indian ornamentation. We lounged like sultans on silk cushions under a rooftop awning listening to Mozart on the CD player while savoring our dinner and the pervasive scent of cloves stored for shipment in nearby godowns. The sun declined in the west.

Suddenly, an explosion of sound startled us. First, the Hindu temple directly next door erupted with the sound of bells. When the clanging stopped we heard the sound of more mellow bells announcing evensong for Christians. The sound reverberated through the spice-scented air only to be replaced with a muezzin’s ancient call from the minaret of a nearby mosque.

Night came and the power went out. It was time to leave. We stumbled down steep stairs by candlelight and slowly felt our way down the hill to our hotel, worrying about falling off the foot-high curbs built to keep the walkways above monsoon rains when they pour down the streets in rivers. We came to a mosque and stopped briefly to look in an open barred window. The imam was preaching to the kneeling men by the light of a kerosene lantern. The rapt worshipers looked up, their beards pointed towards him as the age-old words of the Prophet were retold.

Asalaamu alekum. Peace be upon you.

originally appeared on The Travel Belles in November 2011. bit.ly/LdMvXV