By
judithworks
on
One of the most pleasant stops on the Island of Tahiti is the home of the author, James Norman Hall. Not far from Papeete the modest wood structure is now a small museum celebrating Hall’s life and his books and movies. 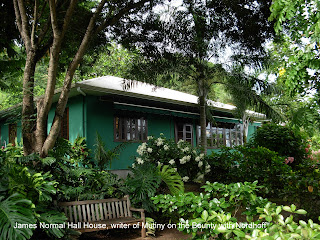 His most famous work is the Bounty Trilogy, comprising the story of the mutiny on the British ship, HMS Bounty, and the aftermath.

The first section, Mutiny on the Bounty, is the story of the ship’s voyage from the West Indies to Tahiti to collect breadfruit seedlings to be planted for slave food and the infamous mutiny led by Fletcher Christian who didn’t want to leave the sybaritic island. He and a few other sailors commandeered the ship and set the captain and the remainder of the sailors adrift.

The second, Men Against the Sea, tells the story of one of the most amazing nautical feats ever undertaken: Captain Bligh’s journey in an open boat – 23-feet long filled with 18 loyal sailors – on a journey of 3600 miles to safety in the Dutch East Indies.

The trilogy is completed with Pitcairn’s Island, recounting the violent life of the mutineers after they settled on Pitcairn Island, a speck in the middle of the Pacific. The mutiny and the story of the mutineers’ lives have been retold many times in film: first an Australian effort with Errol Flynn, followed by the American versions starring Clark Gable, Marlon Brando, and most recently with Mel Gibson cast as Fletcher Christian, the lead mutineer. (I met one of Christian’s descendants on Pitcairn.) 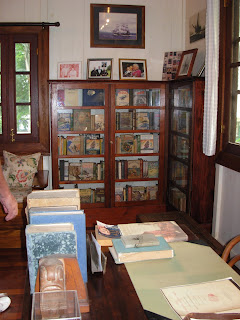 Of Hall’s 12 books Passage to Marseille, Hurricane and Botany Bay were also made into films.

The modest home’s living-dining room has a large bookcase to display the many editions of the writer’s work, each with its colorful book jacket depicting titles in dozens of languages. Movie posters from his films decorate the walls. Another room has mementos of Hall’s service in World War I when he joined the famous Lafayette Escadrille, the American squadron named in honor of France’s champion of American independence. Hall was shot down and spent time as a German prisoner of war. Later he was awarded almost every honor France could bestow including the Legion of Honor and the Croix d’Guerre. 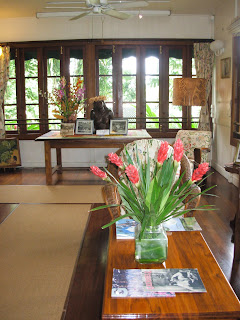 The home is open to the surrounding gardens filled with torch ginger and other tropical colors. When my husband and I visited we met Hall’s delightful daughter. The elegant old lady, wearing a pink dress, a flower over her right ear and a string of luscious black pearls around her neck, sat by a window overlooking the gardens. She regaled us with stories of her Tahitian childhood and read from the book her father wrote for her and her brother when they were children. She also talked about their fear of invasion during World War II, not without reason as nearby Bora Bora was used by the U.S. as a military supply base. Old naval defense guns still remain on the island resting on the jungled slopes above luxury hotels. 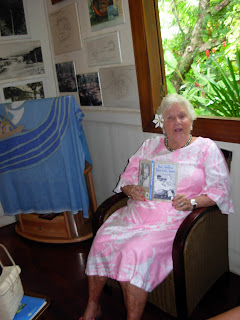 Whatever the fears of the past, the home was a haven, an oasis where it was easy for me to imagine the author using the peaceful surroundings to concentrate on telling us timeless stories. 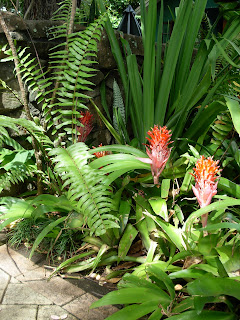