By
judithworks
on
Well, not exactly tea with a living Josef Stalin. But close enough for me. 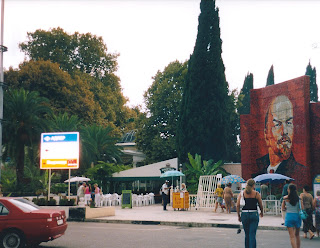 His dacha was not far from Sochi, a city full of new SUVs and hotels but still retaining remnants of the past such as an enormous picture of Lenin done in tile. He was close to the sub-tropical gardens full of strollers. A  nearby MacDonald’s tempted others even though Lenin’s gaze was directing them in the opposite direction. Capitalism was hitting hard with preparations for the forthcoming winter Olympics.
The dacha, looking like a modest hotel,1930’s style, was set in the nearby wooded foothills of the Caucasus. A circular drive led to the entrance where a fountain once splashed. It was removed on Stalin’s orders – the sound might mask an intruder. The building was painted dark green, the same color as the surrounding pine and cypress trees, to make it nearly invisible, another element of paranoia (or realism) present throughout the building and grounds. The main room was furnished with – Stalin. That is, his effigy was seated behind a desk with a map of the former Soviet Empire as a backdrop. Pipe in hand and dressed in his high-collared uniform he looked a bit stiff with age but all the same pleased. Perhaps he was thinking that his workers’ paradise would last forever. 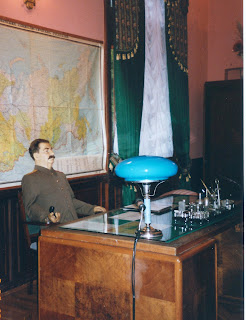 The other notable feature of the room was a large high-sided sofa, said to be configured so that no one could be sure whether Stalin was occupying it or not while American movies were projected for his evening’s enjoyment. It was easy to imagine his aides only laughing at the films when he laughed, only watching what he wanted, yes men in perpetual fear for their lives.

A billiard table was set up in an adjacent room. I picked up a cue to picture him playing a game that he never lost. But at the same time I could not help remembering the tragic film, Burnt by the Sun, that so vividly portrays life under his regime when even the most loyal met death.

When he wasn’t running his empire, watching movies or playing billiards, Uncle Joe could swim in an indoor pool with walls decorated with mosaic panels. A worker was filling the small pool as I stepped over the threshold to take a look. A thick hose snaked over the floor. I tripped, stumbled further then caught myself just in time before making a splash. Probably would have been the death penalty when he was still in residence. 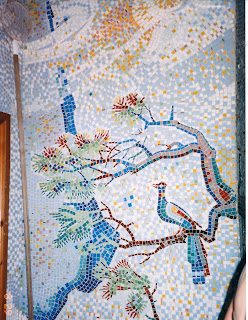 Looking at the dictator’s summer residence, no one could accuse Stalin of having lavish tastes even though he can be accused of just about everything else. Did he ever see ghosts wandering through the rooms? Did he ever give a thought to the millions who died in gulags? Probably not.

The dacha is now serving as a hotel, for what clients it wasn’t clear – a creepier place to stay was hard to imagine unless the guests were suffering nostalgia for the days of show trials and interrogation rooms.

It was time for tea after the tour of the living quarters and scruffy gardens. The samovar was bubbling; our hostess poured glasses of tea and sweet champagne and set out tiny canapés on a table near a balcony. The French doors were open to the garden, dense woods and beyond. I sipped as I looked at the Black Sea in the distance, all the while being grateful that I was sharing the experience with a wax dummy instead of the real thing.