By
judithworks
on
I have a friend who lives in a small town an hour north of Rome. Her home is on Via Etrusca, a perfect name for visualizing the area’s continuing Etruscan influence even though the Romans had finished them off by the Third Century BC. The town, set high on a cliff, has no tourist attractions but is kept alive by commuters and city dwellers who have restored their former family home for weekend use. The ancient row houses are thought to be between four to six centuries old, the year the buildings were actually erected long forgotten. To ensure that the structures stay in place for at least another half-millennium, the buildings are supported by arches vaulting over the narrow stone-paved streets. 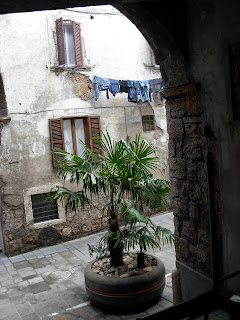 Late in the evening when there are only glowing embers in the fireplace flickering on the ancient oak beams and the art work resting in niches, and the red wine bottle is emptied to the dregs, the silence is as complete as it must have been when my friend’s home was new.

A few lights shine over empty streets, through the arches and the closed shutters of my bedroom. I sleep, dreamless. But early in the morning I awake to the sound of Vespa engines. It’s time for workers to get going and for me to open the shutters and let in the day. Instead I drowsily think about all the people who might have lived in this home in times past. 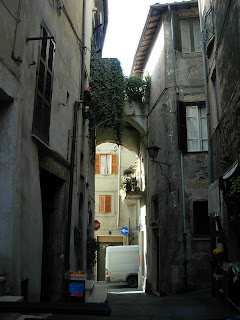 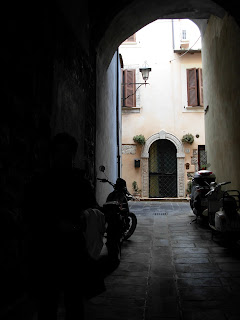 Later, my friend and I walk a few blocks to the small shopping street. If we get going too early the bar owner is still firing up his espresso maker for those dashing to the train station in the valley far below the centro storico perched on its rock. The giornalaio is putting up his rack with the day’s papers blaring out the latest political scandal, while fruit and flower vendors are pulling up their metal shutters and moving their wares outside in the clear light. Life begins anew for commuters hurrying to their jobs in Rome and for us to plan another day of sightseeing in nearby towns like tiny one-street Sovana, Bomarzo with its strange monster sculptures, or Viterbo’s papal palace. 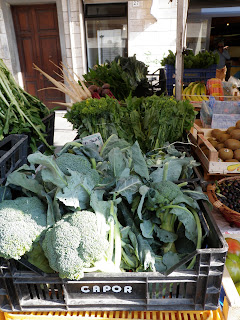 Like all small towns in Italy life goes on for the remaining residents. I can peek through open windows and doors to see remodeled kitchens, new televisions and other indications of renewal. By mid-morning a delectable smell of pasta sauce comes from kitchen windows and from unpretentious shops where fresh lasagna is prepared for those who don’t have time or inclination to cook. Shoppers are eyeing flowers, vegetables and fruit carefully arranged in the minuscule shops sandwiched between offices of the various political parties or those of the pompe funebri, undertakers. Artisans are busy making picture frames, mending shoes or painting ceramics. Butcher shops and tintorias, dry cleaners, bustle with business. Women buy knitting supplies in the merceria where thread, hosiery and shoulder pads for the home seamstress are displayed behind the counter. 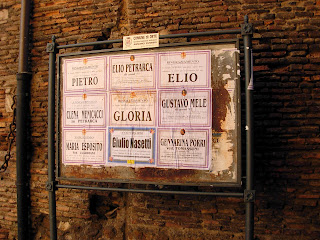 But despite the liveliness, the unstoppable passage of time is always evident. Large death notices are pasted on walls between fading and tattered posters for the small circuses that had come to town in past years. When summer is over old men, wearing heavy sweaters under their jackets along with scarves and caps, will follow the sun as it passes around the piazza. They are living sundials as they move like dozing cats, smoking and discussing how the hometown soccer team is faring.

But I still have many places to go before I, too, want to doze in the sun.