A Walk to Taverna Cestia 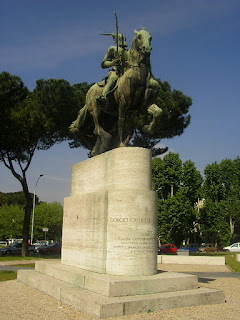 The most spectacular Roman remains from the Imperial period were in front of my office, but the walk to the trattoria in the opposite direction was an immersion in ever more layers of the complexities comprising Italian history from Rome’s earliest days until the present. On the way I passed a monumental equestrian statue in fascist style dedicated by Mussolini to a semi-legendary Albanian named Scanderbeg who united Albania for a time in a fight against the Turks in the 1400s. The dedication in 1940 was apparently meant to compare Scanderbeg to Mussolini, who annexed the poor and helpless country the previous year. Next were the minimal ruins of the Servian Walls, begun in the sixth century BC when Rome was still relatively small and at the mercy of nearby tribes.

One day a modern attraction stood near the wall’s remains. A statuesque dark-haired woman with a plunging neckline and a mini-skirt was surrounded by four admiring businessmen in sober perfectly cut suits, briefcases in hand, all eager to gain her attention as she held court on the sidewalk. Her gold jewelry glinted in the sun against her tan body. I sighed in envy. 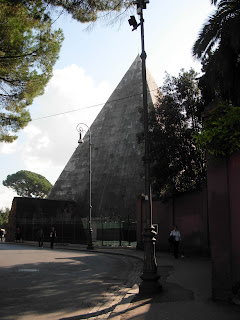 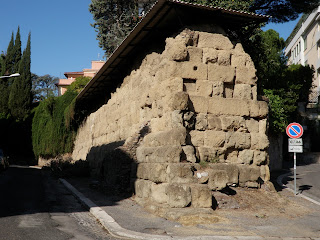 Rome’s only pyramid came next in the historical parade. It was built in 12 BC by Caius Cestius, a Roman government bureaucrat (an occupation that has never waned in Italy). He served in the time of Antony and Cleopatra and was fascinated by all things Egyptian. The pyramid sits many feet below the street level with wild fig trees pushing out between the marble blocks. It always reminded me of a Piranesi etching.
Near my destination restaurant, named after the pyramid’s builder, I could see the monumental Ostiense train station and a post office. The train station was built to welcome Hitler. The post office is decorated with X-shaped lattice designs on the two wings, said to celebrate Mussolini’s tenth year in power, his gigantic ego never fully assuaged.

Separating the two buildings, the Porta San Paolo, originally a gate in the Aurelian walls on the road leading to the great church of St. Paul Outside the Walls, stands alone in the middle of a traffic circle. Originally it was the entrance to Rome from the port at Ostia. The walls were fortifications begun around AD 271 at a time when the Pax Romana was beginning to crumble. Now it was suffering from a different sort of assault, traffic from six roads coming together in a bumper car scenario as frustrated drivers tried to get around the gate. 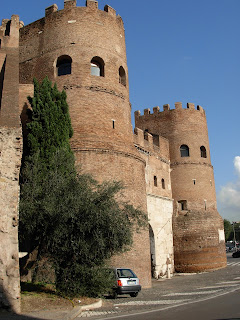 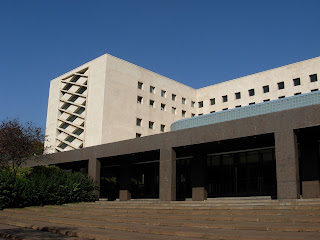 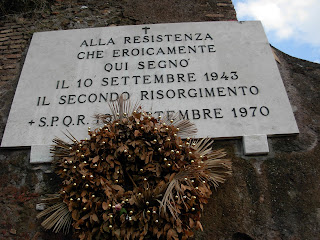 A plaque on the part of the wall broken to let the traffic through commemorates the liberation of Rome by American and Canadian soldiers on June 4, 1944. Past the gate where the wall starts again, the quiet Protestant Cemetery holds Keats’ bones and Shelley’s heart. When Glenn and I visited we saw other plaques commemorating the Italian Resistance along with many of Rome’s feral cats wandering around deserted gravestones. 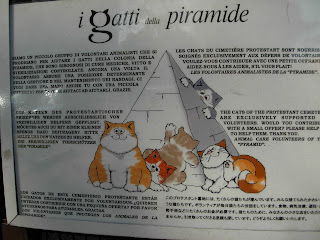 As I walked I mixed my thoughts about history with those of the menu that would soon be in front of me: will I order carciofi alla Romana or zuppa di pasta e ceci to start? For my secondo I’m thinking of spaghetti alle vongle – but then maybe just an insalata will be enough.
(Article based on an excerpt from Coins in the Fountain)

Book Review: The Pursuit of Italy