No, not that one. I’m talking about the one on the Black Sea.

The day was hot, the bus shabby with no air conditioning. The tour company said that they had scrounged the country to find the best. But what would one expect in a poor country trying to dig itself out of communist domination, suffering from separatist attacks and having the misfortune to be the birthplace of Stalin.

A blast of black exhaust punctuated our departure from Batumi as we headed inland for Kutaisi, the former capital and known to the ancient Greeks as home of the Golden Fleece. Our goal was two UNESCO World Heritage sites, the Bagrati Cathedral founded in 1002 and the Gelati monastic complex founded a century later. The road was long and in many parts steep, narrow and winding, filled with huge speeding trucks bringing in goods from Turkey and oblivious farmers with horse-drawn carts. We crossed a new bridge just built to replace one blown up by separatists.  In the background we could see the snow-capped Caucasus mountains. In the foreground were a few small towns with old women in black and the younger ones dressed more colorfully. 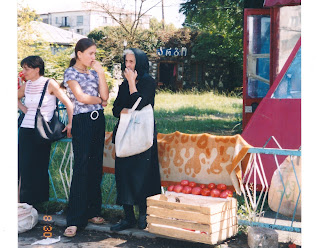 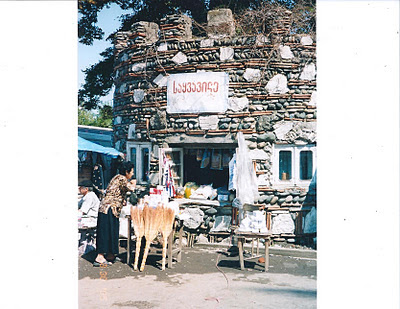 When it seemed that there was no end to our journey we came to a restaurant on the outskirts of Kutaisi. It was easy to see why Georgians are famous for their hospitality when we sat down at the long table. Lunch was served by our beaming hosts: breads; cheeses; chicken and pork dishes with sauces made of walnuts or pomegranates; eggplant, tomatoes, salads and of course local wine from the country said to be where grapes were first turned into a drink for the gods. Plate, platter and bottle kept arriving. Soon there was no room on the table for the largesse. The table was groaning and so were we.

After we managed to finish the baklava it was time to visit the Cathedral. By the time we reached the steep and narrow lane leading upward to the Cathedral it was stifling hot with no way to open the windows in the small vans that were taking us to the site. They could hardly lurch up to the top of the hill. When we finally arrived at a small parking lot we all clambered out, desperate for fresh air. 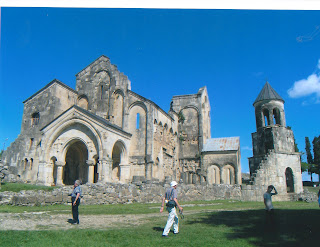 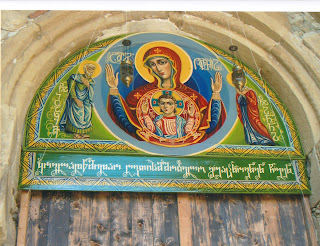 The Cathedral was built in a distinctive style – rounded arches, heavy pillars and round bell towers set on square bases and topped with conical hats. Unfortunately soldiers of the Ottoman Empire blew part of it up in the 17th century, giving it a melancholy aspect despite the bright icon-like painting over an ancient door, new contrasting with old. The weight of a thousand years of painful history, war and supression, were reflected in the stones. I put my hands on the sun-warmed grey blocks thinking about all the worshippers who must have turned toward God in good times and bad in this sacred place.

As we finished our visit I noticed one of our fellow travelers was vomiting uncontrobally while her husband held her head and tried to comfort her. I realized that I didn’t feel well either. It didn’t take long to determine that a couple of pink pills weren’t going to help my personal situation, which seemed to be a mild case of heat stroke. The  woman who had been vomiting was now slumping on an ancient stone. I occupied the one next to her wondering what to do. She asked to be taken back to the restaurant instead of continuing on the tour. It seemed wise to go with her lest I ruin everyone’s afternoon. So there the two of us sat in the reception area of the now empty building feeling sorry for ourselves while everyone else, including our husbands, went off to see the monastery complex set deep in forested hills. 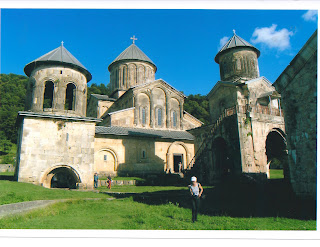 Finally Glenn and the rest of the group returned. He told me me about the strange old priest dressed in white with blood on his gown and about the beautiful frescoes decorating the monastery. How annoying to miss this. 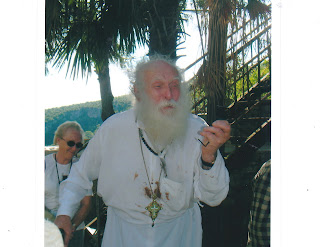 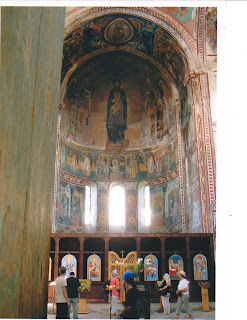 Back on the bus the driver wanted to return home – badly. So badly that he passed every vehicle, on curves, on hills, everywhere. Our minder was  alarmed, arguing with him to no avail. She called the police who arrived to lecture him and then drive in front to slow him down. It got dark, the police decided to head to their own homes. The bit was back in the driver’s teeth. Carts without lights were still weaving down the road. People were standing in the road in the dark, jumping out of the way at the last moment. Turkish trucks continued to blast by in the other direction. I forgot about my innards in favor of worrying about my life. When the city came into view far below several hours later I practically burst into tears of relief. I will never be awarded a medal for bravery that’s for sure.

Not one of my better travels but better than not going at all.

A Walk to Taverna Cestia