I just read that Vaclav Havel died. He was the dissident playwright who became Czechoslovakia’s first president after the collapse of communism in central Europe. The news turned my thoughts back to a trip to the newly-liberated country a year after freedom arrived in the guise of the Velvet Revolution.

We drove up from Rome and turned right at Bayreuth to cross the border into an exceedingly dreary country, one where time seemed to have stopped after World War II. The road to Prague was dotted by what appeared to be unproductive farmland and deserted villages, the homes hiding their inhabitants behind dingy curtains. Nothing like Germany with its roaring factories, lush farms, and towns where the half-timbered houses had geraniums blooming in every window box.

We had been invited to stay with a neighbor’s aunt and uncle, both musicians – she with the opera and he a professor of violin at the conservatory and a member of a well-known quartet. Our neighbor in Rome, a Czech singer, made the arrangements. We asked about payment for the hospitality but she insisted that they would not take money. How about something from the commissary we asked? Perfume, cigarettes or brandy would be welcome was the response. So we bought a selection of each in thanks for the prospective kindness of opening their home to strangers. 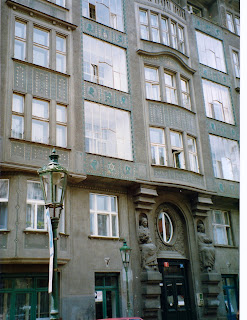 Following directions we drove to the center of town and pulled up in front of an apartment building. To our surprise the building had the Star of David among other designs set in tiles on the facade. We saw an old clock tower with Hebrew numbers on the dial up the street and the famous Jewish cemetery with its crowded leaning headstones a few steps away. We were in the middle of the former ghetto.

Our hosts welcomed us into their spacious apartment. The furnishings were modest and it looked like little maintenance had been done to the interior over the years.  We produced our gifts which were accepted with smiles. Later we saw them all arranged in a row on their sideboard – to show the neighbors, trade for more useful goods, or just to enjoy before using?

We set off to look around the city. The scene was lively: Japanese buying  Bohemian glass, the filming of a television production with waltzing dancers in 1850’s costumes, youths also in costume passing out leaflets advertising concerts of Baroque music, sightseers from everywhere, and sleazy men in leather jackets and pointy shoes whispering in our ears: “do you want to change money?” We toured the Friendship Store where a few shabby odds and ends from communist controlled countries were still for sale – Vietnamese rice cookers and Russian dolls among them. Shop windows had displays of photographs from the revolution decorated with Czech flags. A few posters of Stalin remained on kiosks. The 15th century mechanical clock was chiming and its apostles were parading when we sat down in a cafe to enjoy glasses of Pilsner Urquell and take a break from elbowing through the festive crowds.

Footsore, we returned to the apartment where we had been invited to dinner. We accepted on the promise that we would take them out the following evening to the Intercontinental Hotel a few blocks away. First, our hosts brought in a bucket of beer from a nearby tavern and poured more that we ever wanted. With a background of Dvorak’s music on a record player, he told us about his fears that they would be forced to leave their state-subsidized apartment. He and his wife  had lived there since the end of the War but had recently been informed that they would no longer receive a subsidy, making the rent beyond their means. It seemed that the onset of capitalism was already making changes.

The wife announced that dinner was ready. The table was set for two. To the accompaniment of another recording we sat alone surrounded by more beer, platters of huge dumplings and heavy salads. We could hear our hosts talking softly in the kitchen. Were they too poor to eat the same meal or just finding us a burden – we didn’t know. So embarrassing, but we knew that if we didn’t eat it would be rude even though we weren’t hungry.

That night we lay awake listening to the ghetto clock tower chime, making us think of the fate of the apartment’s former inhabitants and all the other souls that had been dragged out of the building only to die in gas chambers or of exhaustion from slave labor. The bloody history of Europe once again confronted us.

The following morning we walked over the Charles Bridge with its soot-stained statues of saints lining the walkway spanning the Vltava River. Our destination was Prague Castle. We inspected the rooms filled with treasures, too much to absorb in one go. We were walking down a long hall when Glenn said, “There’s Henry Kissinger.” Unbelieving, I said, “It can’t be.” A woman next to us said, “Is too.”  We turned around to see him and Vaclav Havel deep in conversation.  Soon it was time for lunch. We walked out of the castle and saw the pair on the balcony of a nearby restaurant. We decided it must be a good place to eat and walked in. So casual: we were seated at the next table directly across from them and their wives. No security in sight. 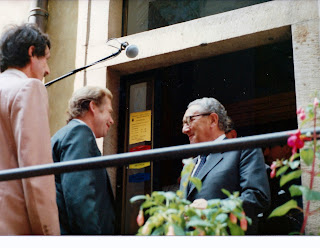 My one minuscule brush with history in the making.