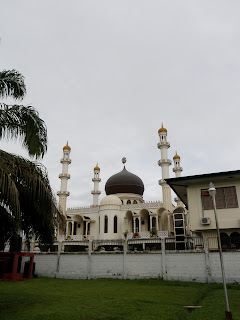 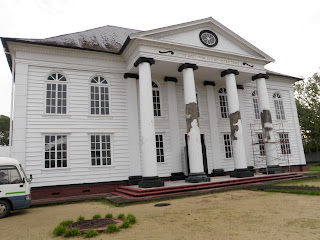 Suriname was the next stop. The contrast between dismal and pewter-colored Georgetown and bright Paramaribo was surprising. (Maybe it was the sunnier weather.) The city hosts many houses of worship reflecting the varied persuasions of its inhabitants, Amerindians, Indian Indians, Javanese, Africans and Europeans. Mosques, a synagogue, Hindu temples, an enormous Gothic style wooden Catholic church and smaller evangelical churches were scattered about the city center. The synagogue with pillars needing paint and sand on the floor to prevent arson was sad – the congregation dwindling and the gravestones in the yard cracked. In a reflection of current events the adjacent building was a very prosperous-looking mosque. 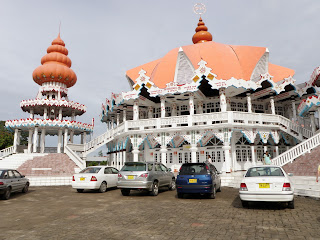 We sat in a spacious Hindu temple to watch the sacred fire burning and listen to the priest chanting to the sounds of a harmonium. Outside well-dressed children chatted while waiting for their elders.

The old red brick Dutch fort has been repaired as a tourist attraction, cannons now silent. The government buildings, left over from Dutch rule which only ended in 1975, sit on a large greensward with adjacent streets lined with beautiful homes in Dutch style surrounding the area. Further away from the center were old homes, dignified even in their delapidated state. 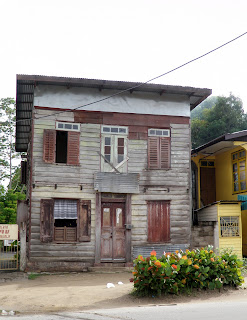 Like the places of worship the local market was reflective of the inhabitants’ tastes: curries, noodles, satays, fried rice, noodles and piles of tropical fruits and vegetables awaiting buyers. The vendors were happy to give us tastes. We munched as we strolled along a road lined with stalls.
Live crabs strung on strings, buyers watching them struggle to ensure they were alive and fresh, tiny fish who weren’t alive displayed in plastic basins, sad looking parrots sitting in the bottom of boxes waiting for someone to take them home, and sprays of lobster-claw heliconia resting in buckets ready to brighten up rooms kept dark to ward off heat, all competed for customers’ attention. A few Dutch wandered around among the mixed crowd. It was easy to recognize them: tall and white blond with lobster-colored skin from the heat and sun. 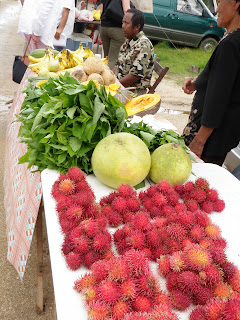 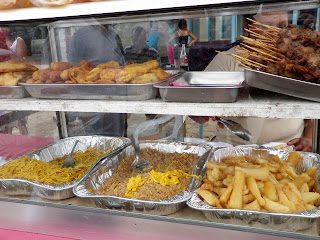 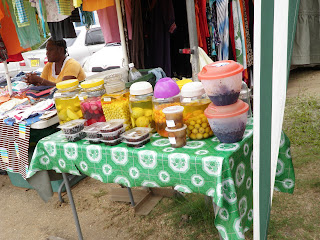 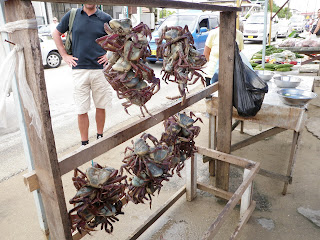 Our last stop was not part of the original plan: the day we left for our trip the cruise company called to say that they had made an error – we would not be able to make our flight home from Cayenne, French Guiana as planned because they had neglected to consult the tide table to get into the small port. We would have to stay overnight. Strange, we thought, but it was an opportunity to spend a day in a location we would probably never see again.

On the way the ship stopped at Devil’s Island, not for sightseeing, but to put about half the passengers on a local ferry that was going to Korou, the home of the European Space Agency. Several hours later we watched a small cargo ship pull out from the single dock, almost everything being brought in from the home country, France.Our ship slid in behind it and we disembarked in boiling heat to get a taxi into town. My feeble French snapped into action to tell the driver where we wanted to go.

In political fact, we were in France, in actuality French Guiana and its captial, Cayenne, are but a leftover from colonial times. A guide book,which had one page about the country, told me there was shopping for luxury French items. But all we saw were a few replicas of French versions of Wal-Mart and tin-roofed stores selling hammocks and supplies for gold-prospecting up-country. A few sweaty colonial administrators were drinking beer. We joined them after assessing that there wasn’t anything to see beyond run down buildings. 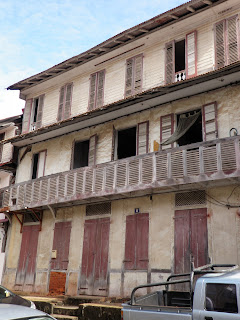 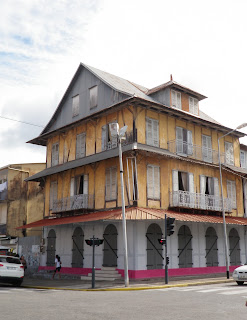 Warned that there were rush hour traffic jams on the way to the airport we got up extra-early from our Best Western hotel (who knew, said our travel agent). Our driver from the afternoon before was waiting for us in his alarmingly decrepit clunker. The taxi lurched and coughed through a tropical downpour, repeatedly coming to a stop unexpectedly in the middle of the road in pouring rain. Not a single other car was on the road. The airport wasn’t even open two hours before our late morning flight. We stood around looking are rocket models of the type shot off in Korou and the warning signs with pictures of items prohibited on flights to the interior: pick axes, machetes, automatic weapons. Finally it was time to board Air France back to Martinique. Champagne all the way.

When we returned I found that a new book had become available: Wild Coast, Travels on South America’s Untamed Edge. The author, the well named John Gimlette, turned his perceptive eye on the area we had just glimpsed. My eyes would have seen the landscape differently had I read the book beforehand. He does not stint from describing the horrifying treatment of the slaves on the sugar plantations by the Dutch, the brutal wars between them and indigenous and runaway slaves (marrons), the French brutality toward prisoners on Devil’s Island and other penal colonies in this outpost that is technically part of France, the current exodus of Guyanese trying to forget the current miseries of their former home, the Jonestown massacre and the terrifying jungle that makes up so much of this corner of South America.