By
judithworks
on
A Guest Post by fellow traveler, Janette Turner:

One summer I traveled to Italy with my husband’s business school and set out on a side trip to Venice. My companion was another wife amusing herself while her spouse was in class. As I sat in the back seat of a student’s rental car next to Barb, she revealed why all the other wives had gone off without us. 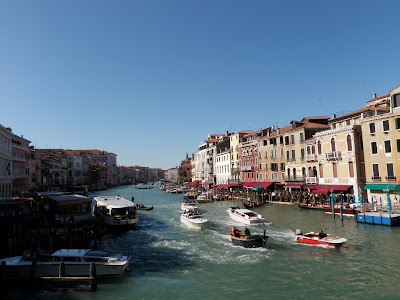 “Slow down!” said Barb every few minutes, even though the young driver was motoring in the right lane, letting cars pass. Soon there were so many admonishments and complaints from Barb that I realized I was reflexively cringing whenever she opened her mouth. She seemed to have the same displeased opinion about everything, including the short ride on the train and the choppy water against the sides of the Vaporetto that finally arrived. Most of all, she complained about her husband. “Martin flirts with the coeds and doesn’t seem to notice me.”

I nodded in sympathy while leading us down the alley to our budget hotel. Opening the door to our room, I was shocked to see a chandelier and gilding on the bathroom fixtures. The floor at my feet was a mosaic of marble. “This room is divine.” 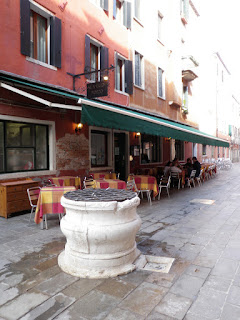 Barb looked around. “It’s dirty,” she said and continued her list of marital complaints. At one point she abandoned the subject to discuss dinner. “I don’t care where we eat as long as it’s cheap.”

As we wandered an alley, I read menus posted under strings of white lights outside restaurants. Over pasta and tap water, Barb continued her husband’s crimes against their marriage, from forgetting her 50th birthday to drinking too much vodka. She waved away the waiter’s platter of desserts and, still talking about Martin, marched us back to our gilded room. 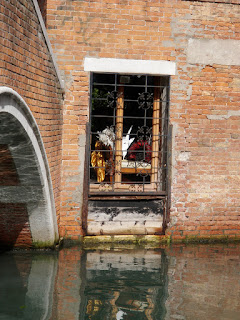 The next day was a repeat of the first. Barb recounted every one of Martin’s crimes and I listened, but this time we were walking along waterways, up and over the Bridge of Sighs and past shops selling gold jewelry, Carnival masks and glass works. Every once in a while I would point out something to Barb, just to get her eyes off the dusty ground in front of her.

I finally got a break from her chatter in a glass shop. I admired the craftsmanship that went into the goblets, but my budget was tiny. My husband and I could barely afford his schooling and the trip, so I turned my attention to the “seconds” table when I heard something surprising.

“I love this,” said Barb, holding a glass pen in her hand.

I turned it over for the price tag. “It’s just ten dollars, so buy it.” I knew from listening to Barb that she had amassed a fortune for herself and her husband, although he did not appreciate her penny-pinching talent. 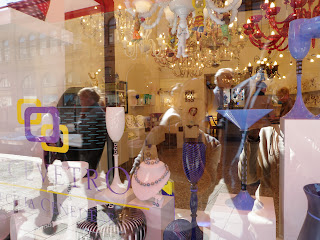 Barb held the clear instrument to the light off the canal. “I’ve always wanted something special to write a book with.”

While she mulled, I bought a handful of bracelets with the fewest number of deformed beads. When we left the shop I asked Barb about the pen that she surely must have bought.

“I didn’t buy it,” she said, resuming her pace and recounting of her husband’s crimes.

At dinner that night I finally broke over a glass of wine. “Just divorce him.”

She startled as if coming awake. “Divorce him?” She looked at her plate of ravioli. “Well, I guess I could. I probably should. Yes, I will divorce him.” She raised her water glass and we toasted her decision. “I’ll finally be happy. He can date coeds and we can split the property.” She took off, detailing her future divorce. Every plan she made was a thousand times happier than the misery she had sown earlier.

The next morning I awoke early and saw her eating a candy bar on her bed. “People came by all night long to buy candy out of the machine below us. It kept me awake.” 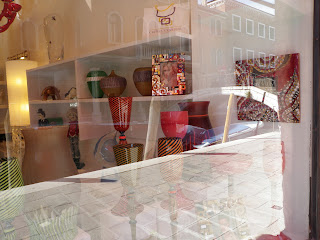 “I have to get something,” I said, quickly changing into a skirt and sleeveless blouse. Out on the street, I walked past the candy machine for the nearest glass store. This shop was in the hotel district, so the prices were triple those we had seen a day earlier. But this was a special purchase. Back in our room, I handed over the narrow package. “I had to get this for you.”

Barb undid the green ribbon. “Thank you,” she said, picking apart tissue paper to find the glass pen inside.

I opened my arms for the hug I expected. “May you write and create the life you want after your divorce.”

She put the lid back on the box, re-tied the ribbon and walked over to her luggage. “I’m not getting divorced.”

I watched her pack the pen away, knowing there would be no book written with that instrument. It would be forever locked away in its little coffin tied with green ribbon, a frozen symbol of her life, stuck and waiting for something. Something that might never happen. 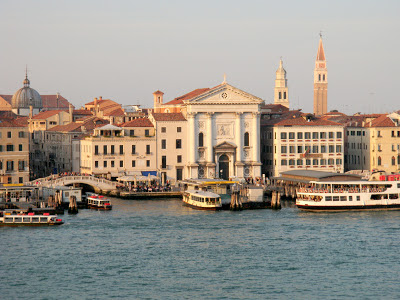 Janette Turner is a writer, reporter, and memoir coach. You can read more of her work at www.JanetteTurner.com.