It was disturbing to gaze into the vacant eyes of a 5500-year-old man who could possibly be one of my most distant ancestors.

Otzi, as he is known after the location where he turned up, is sleeping in the northern Italian city of Bolzano between Verona and the Brenner Pass. But Otzi doesn’t rest in peace because he was a murder victim in a case that will never be solved, and because some scientist or another is always wanting to study him  or check on his health. It wasn’t good at the time of death – at about age 46 he was arthritic, infested with whipworms, was lactose intolerant, suffered from Lyme disease and arteriosclerosis. On the other hand he didn’t have tooth cavities. Currently the concerns involve worries that fungus will eventually eat into the body and destroy it. 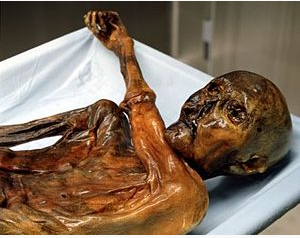 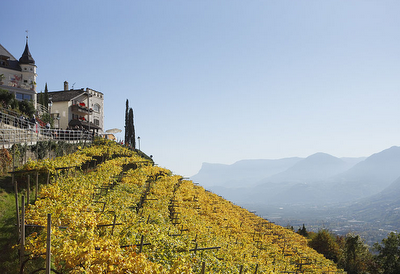 The area of the South Tyrol in the northern part of Italy was in Austria before the end of World War I and is still heavily German in culture. It is one of the most beautiful regions – full of vineyards spilling down the slopes, clear rivers and streams and many winter and summer resorts. We were staying in the lovely town of Bressanone, or Brixen as it is known in German, when we heard about the mummy. We headed south for the short drive down to Bolzano to visit him. 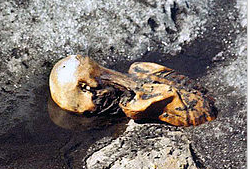 Not a mummy like those in Egypt, bandage wrapped with their internal organs removed to jars, Otzi is nearly whole – except for his penis reportedly stolen when he emerged from the ice on the Italian-Austrian border in 1991.

Now he reclines in a refrigerated case where visitors can look at him, and in a separate section study a life-size model and his clothing and tools. He wore a loincloth of goatskin and a overcoat made of long strips of the same skin fashioned with alternating dark and light colors held together with animal sinews. The coat was closed with a  decoratively-stitched calfskin belt. His leggings, also of goat, are similar in style to those worn by North American Indians. His laced shoes, no doubt also Italian high-style at the time, are like booties stuffed with hay for warmth. The sole is made of bear, fur-side in. The upper part, with hair turned out, is deerskin. The ensemble was finished with a plaited grass cloak and a bearskin cap to be tied under his chin.

No different than the rest of us he had jewelry – a tassel with a marble bead. He also carried two birch bark containers that may have been used for embers, and a food supply: smoked ibex meat, einkorn (like farro) and sloe berries. Along with these items were two clumps of birch fungus, an anti-bacterial compound used to heal wounds well into the 20th century.

Otzi died sometime between 3350 and 3100 B.C., long before the Pyramids of Giza were built in Egypt. Despite being armed with a bow and arrows, a dagger and an axe made of almost pure copper, he lost a fight for his life after bleeding to death from a stone arrow lodged in his back along with other wounds. A lonely and painful death high in the Alpine snowfields, far from kin and hearth.
Of course we can’t know where he was going or why but it has been determined that his ancestors came from the Mediterranean, most likely Sardinia or Corsica. And he might have had some Neanderthal ancestry. 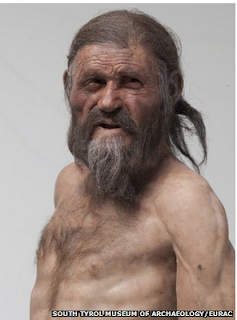 What a strange feeling it was to look at him. Egyptian mummies are interesting because of the elaborate burial rites surrounding them but this was different. Here was a real European preserved by Nature, a possible far distant relative, a traveler like me, and a window into the remote past which isn’t really so different from our lives after all.