By
judithworks
on
It was a long way to travel to see sled dogs – well, I admit that it wasn’t the only reason for the trip but it was one of the more interesting stops along the way. 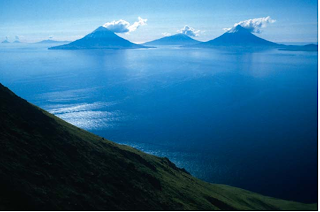 We left Kodiak Island in a huge storm with an ocean-going tug escorting us because of jagged rocks so close to the ship I felt we could have stepped off for a hike if we were feeling foolhardy. By morning the weather was clear and the Aleutian Islands were off to starboard. Snow-capped volcanoes were smoking lazily; just an occasional puff from their pipes seemed to content them. The ship turned north to enter the Bering Sea. 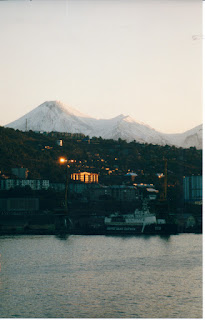 Despite my fears of bad weather and having visions of a Deadliest Catch experience the sea was like glass, so smooth that the few clouds were reflected in the water making a magical scene where sea and sky were one. By afternoon the water was ruffled with whales blowing and millions of seabirds fluttering and diving. A few fishing boats were on the horizon, otherwise just a vast emptiness on all sides. 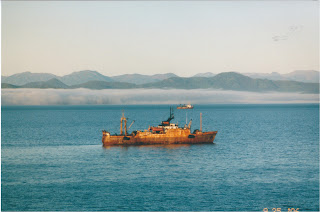 A few days later we entered Avacha Bay on the southern end of the Kamchatskya Peninsula in Russia. The bay, overlooked by two towering volcanoes and snow-capped mountains, was still in dawn shadow. Shortly after a brilliant sun rose to light up the cloudless sky, the snowy mountains and the bright orange rust on old freighters resting in an eternal sleep while they rotted at anchor. A layer of fog hugged the ground to soften the scene. 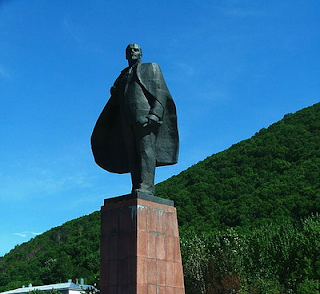 We docked at Petropavlesk. The Siberian city is 4200 miles from Moscow on the map but with no roads that would actually allow you to drive there. It was founded by the Danish explorer, Vitus Bering in 1740 who named it after his two ships, St. Peter and St. Paul. Despite its age the city of 180,000 had an element of the Wild West, low on the traffic-signal quotient and with a ramshackle aspect. 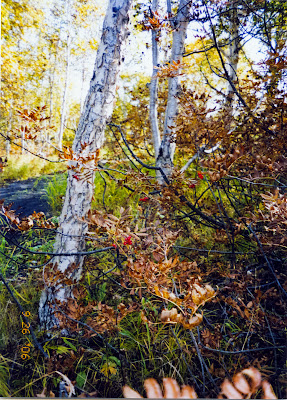 We climbed in a van, passed the inevitable statue of Lenin, gazing with determination toward who knows what now, and headed out of town, passing under steam-heating pipes arching the streets. It wasn’t long before we were in the countryside where birch trees and shrubs wearing fall bronze and gold leaves covered the hills. Turning off the road we traveled toward a sled dog training center, our goal for the day. A chorus of frantically barking dogs announced our arrival at a tiny cluster of buildings – the kennel, lodge and outbuildings and a few dachas surrounded with gardens of cabbages. Guarding the sight was one of the snowy volcanoes. The air was so still that its smoke plume looked like a white feather stuck on top for decoration before it dissipated. 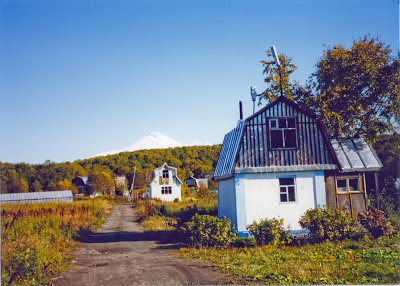 Each dog was attached to a long chain next to a small dog house. The chains were arranged so that neither dog could reach its neighbor. We stood well back as these working dogs didn’t wag their tails or smile. But the puppies – what a treat to cuddle them even knowing that they would never be anyone’s pets. 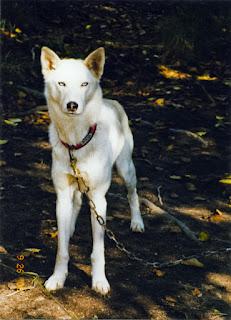 While fresh-caught salmon was grilling we looked at the native clothing and dog harness displayed in the lodge and foraged for berries and mushrooms along the paths leading to the wilderness of Siberia. 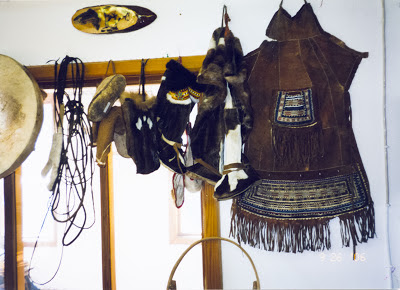 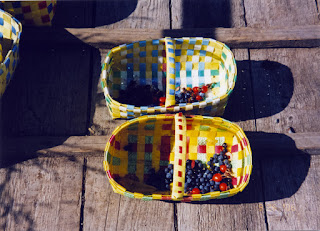 We could hear the dogs barking frantically, so agitated that they were jumping straight up until their chains jerked them back to the ground; they knew what was next on the agenda. Lunchtime over, the trainer brought out a sled with wheels for off-season use. As he held up the harness each dog seemed to be yelling “Take me, take me.”  He picked six dogs who rushed to the sled to be set in the traces. The trainer stepped on the back and off they went, so fast that we could hardly take a photo. The wheels of the sled bounced off the ground threatening to throw the driver into the dirt of the rough track. Back and forth, around and around the track the dogs ran with joy, their mates still at the kennel barking encouragement and longing for snow, not far away on this late September day. 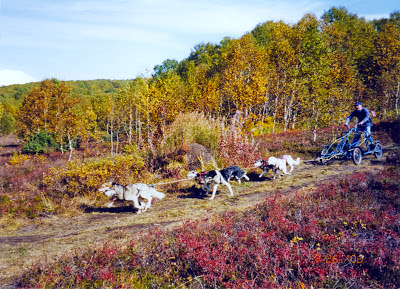