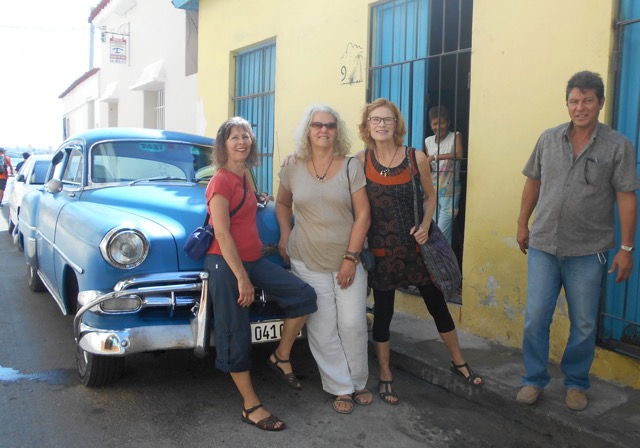 It is a hot afternoon in Santa Clara, Cuba, and perhaps that is why we are the only ones standing at the Tren Blindado park, listening to an engaging gentleman share his adoration of beloved rebel, Che Guevara. We are trying to picture the bold Guevara using a bulldozer to derail the train that ignited the Cuban Revolution.
More vivid, however, is my memory of trying to give this older gentleman, a veteran who experienced the Revolution fifty years ago, a few coins. He waves off the tip and instead derails us with his simple request:
“Algunas plumas, por favor?”
We are a bit stunned. He wants a couple of ink pens? Between the three of us, I could only pull up two Bics from my backpack, but he seems delighted!
Such an odd solicitation should not have befuddled us, for we teachers have been traversing Cuba for nearly three weeks. Such ordinary requests remind us that items of great worth to some are ordinary to others.
After researching Cuba for months, we decide to go without a tour group in March, 2015. We could reduce costs and avoid limitations that can hamper a large group. Typically, whole groups get off the bus together, walk and eat together; yet they probably learn more from guides —and never get lost. That’s not our current style of travel.
We are curious to see Cuba before it could all change. The two countries are wading in a new political pool: President Obama began testing the waters by “normalizing relations” with Raul Castro’s communist government a year ago.  According to official websites, as long as we have “educational motives,” it is legal to travel as singletons.
Reading travel blogs and listening to friends who have traveled to Cuba help to fortify our confidence. Truly, it is astonishing to complete an online booking from the U.S. for rooms in a Cuban home —without payment, simply trust, and the rooms would be there upon arrival! We would pay in Cuban currency, as there are limited ATMs in Havana.
We learn from previous travelers that there are key items that are simply in short supply in this country. Why not share our “take for granted” products, in hopes they would be conduits to conversations? Laden with this extra weight, we fly to Cancun, Mexico and then to Havana. Cuba is only 90 miles off the coast of Florida – and now, in 2016, direct flights finally operate out of Miami. This is a big deal.
What is our first thrill upon leaving the little airport?  An impressive array of shiny 1950’s Fords, Chevys, and Buicks slowly parading along the warm Malecon boulevard, often filled with men, their arms resting out the windows, cigars in hand. Oh, the pride of owning such a vehicle, where owners can not rely on American car parts since the Cuban Embargo of 1960. Much ingenuity and creative substitution keep these cars a rollin’. 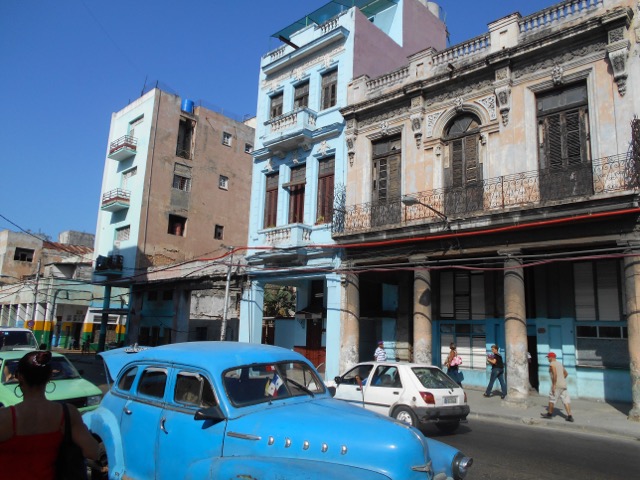 Less than an hour out of the airport, I am already dispersing from my bag of baseball caps that friends gave me back in Seattle. In my first hat-sharing, a friendly Havana cab driver took us to a cambio with a good exchange rate. While my friends pick up local currency, CUCs, I stay with him and our luggage. Our ensuing conversation leads to his two children.
“Les gustan béisbol?  I ask.
He turns around with a wide grin, sharing that he and his son both play for local teams. When I ask him to reopen the trunk, he looks warily at me from the rearview mirror. But when I produce two baseball caps from my backpack – a Marinersand a Tampa Buccaneers – he is taken aback. He begins a little grateful dance, showing other taxi drivers his new delights.
He drives us to our lodging, close to an old plaza in the Habana Vieja, where UNESCO is refurbishing Spanish colonial buildings. Children are kicking soccer balls in the shady, narrow streets; and nearby restaurants and bands under the balconies beckon us to stroll over. But first, our taxi driver happily hefts our bags up the two flights to our new casa. To our surprise, the place exudes an old-world elegance: tall, chandelier-filled rooms of antiques. And for only $35 US dollars a night for three of us, how could we not spend five days here?
Each day we safely walk the curvy, often torn-up streets, ready to play quasi -ambassadors. Learning that older Cubans need reading glasses, it turns out to be a fun way to interact with a Havana street-sweeper or the women sitting on stoops. I ask if they know someone else who could use reading glasses. Lo and behold…they need the glasses. This leads to photo ops and fresh laughter, as they admire the new views. 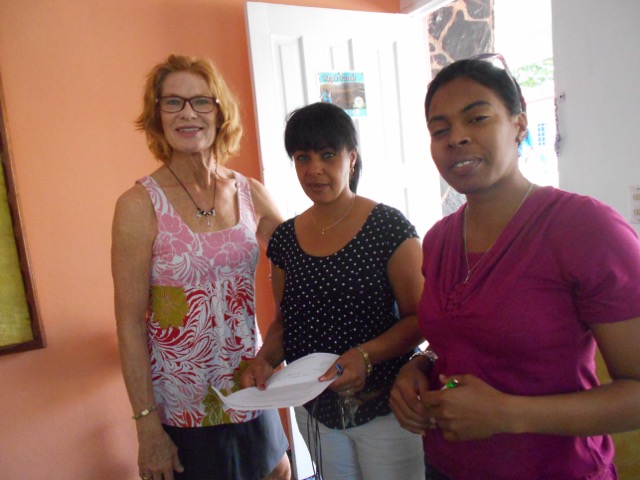 One morning we negotiate a taxi ride to the friendly town of Vinales near tobacco hills of western Cuba. Lucky for us, our host at this “casa particulare”, a home stay, was a former teacher. It is there where we connect with two principals to set free the bag of school supplies. They are overwhelmed with our primers, pencils, rulers, markers, maps, and flash drives.
“Tienes Usted papel?” one asks. “Do you have paper?”
They explain that the government only provides paper only once a year, so all items must be carefully utilized. Students write on both sides, in the margins, then erase and reuse. Despite lack of paper, the communist government provides free education through college. Literacy rates are high, ever since the government had a highly successful literary campaign in 1961 to educate the country folk.
We arrange visits to walk to two schools on the hill. Small chalkboards rest on  old wooden tables, three students to a bench in the clean, bare rooms. Dressed in uniforms, in rows, the children are polite, if not a bit stunned.
I think I hear young students snicker behind me while I attempt to draw the United States map on the board, explaining Washington state vs. Washington D.C.  More riveting are the boxes of Kind bars we pull out —prompting an awkward, self-serving moment.  Hmm, perhaps I may want more credit than I deserve?  After all, what arethese children thinking?  Within seconds, the teacher promptly cuts the Kind bars into thirds to reach other students as well. Not a peep was heard.
We take a tourist bus to remote Cien Fuegos, where the clippity clop of horse-drawn buggies are the main travel mode. We gravitate to the nightly dancing. One of my companions previously took salsa lessons and it pays off! Gentlemen politely take our arms, especially hers, and lead us to dance to the intoxicating music, sometimes on the sidewalk outside the bar. They are curious, polite, and handsome dancers. Pinch us.
The Afro-Cuban percussion pulls us in wherever we are. In the city of Trinidad, a historic colony of sugar plantations, we see throngs waiting on plaza steps for the rhythms to electrify their evening. Just as wonderful is the quiet moment: a horseback ride into the countryside where farmers were drinking their Cubita coffee and playing dominoes. It was in Trinidad that my last “hotel” toothpaste and soap are shared. A donated UW baseball cap goes to a skeletal, toothless man selling undecipherable treats from an old wheelbarrow. He beams, bows and wants to share his treats with me.
Our travel is not extraordinary, nor did we dance with danger. We leave with contentment, lucky to have the richness of time to explore —and more importantly, to connect authentically with Cuban people.
Cuba seems to be an anomaly. It may lack some basic products, like the oft-seen nearly empty shelves of grocery stores and pharmacies. And if the shelves were full, it was of one governmental brand, not like the abundance of choices here.  Yet, the richness of the culture is spread out to all: the beloved ballet, the intense music, baseball games, and theater— all are affordably priced for locals and tourists alike.
How long can this vibrant culture of Cuba remain intact, as more tourists and businesses vie for frolic and opportunities? No one knows. If I am lucky enough to revisit this charming country, I’ll gladly pack more pens and reams of paper.

Rita Ireland has been lucky to teach in various parts of the world.
It was a lovely impetus to escape — growing up on an Iowa farm.
She now lives in Edmonds, WA with her spouse, who found her on
desolate Sunday morning beach 41 years ago. They have two children
who also live far away from home.