By
judithworks
on
A bookstore will never lead you astray if you’re looking for something to carry you to mysterious places. Our local bookshop in Rome (actually in my office building) had a delightful name, “Food for Thought.” It also had a bin of older paperbacks toward the back where I regularly rummaged to find something inexpensive to read. And, one day, there was Holy Blood, Holy Grail at the bottom of the bin. With a blurb that said it was “explosively controversial,” I bought it. Tucked in with feet on our bombola (our propane heater for supplemental heating in the winter and one that I worried might be explosive in a different way), I dove in that evening. And I kept reading because I couldn’t put it down.
It begins with the story of an ancient and obscure church in the south west of France between the foothills of the Pyrenees and the Cevenne mountains, and spins off into claims that Jesus and Mary Magdalene were married and their descendants founded the Merovingian dynasty and are thus the rightful kings of France. These claims are amplified by others about blackmail, buried treasure for the ransom of Saint Louis from the infidels, the locations of the Holy Grail, the treasure from Solomon’s Temple, and the mysterious Priory of Sion in Switzerland. The Knights Templars, the Masons and an indecipherable painting by the Renaissance painter, are all thrown in the heady brew in case the reader’s interest begins to wane. If this sounds familiar, it should, as Dan Brown capitalized on some story elements in The Da Vinci Code. In fact, the authors of Holy Blood brought (and lost) a plagiarism suit against Brown in 2006.
Hubby read the breathless book while I plotted a trip to see the mysterious church in a hamlet called Rennes-le-Chateau. I finally located the area, one where the Cathars, a heretical sect, lived and died during the Albigensian Crusade in the Middle Ages. Off we went on our next trip to France. 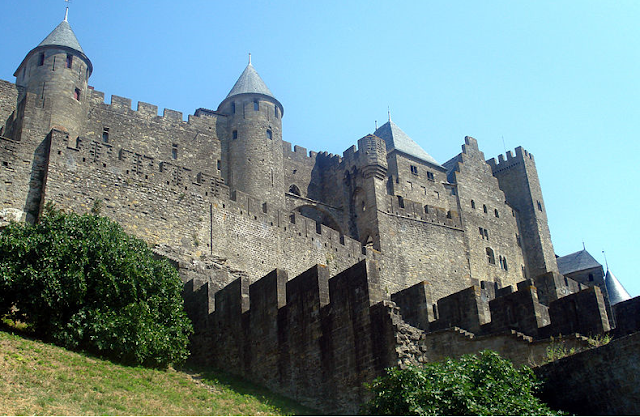 We left the walled city of Carcassone, not far from the Mediterranean Sea just north of the Spanish border. The vineyards surrounding the city were soon far behind as we drove on winding roads through oak and pine trees amid rough limestone gorges, outcroppings and crags. The sun was misty, the sky a watery pale blue, making the scenery appear ephemeral and steeped in mystery. The ruins of a fortress, Montsegur, high above us, appeared in the damp air as though it was a mirage. It was easy to picture the ghosts of the last Cathers, the 245 remaining survivors of the genocidal campaign by the Church, who were burned in a mass execution after the final campaign ended here. The site was destroyed over the years and now the nearly inaccessible and melancholy ruins of the later medieval castle stand as a memorial to intolerance and a fight to the end. In my mind I could hear the dead still keening for their lost lives and faith. 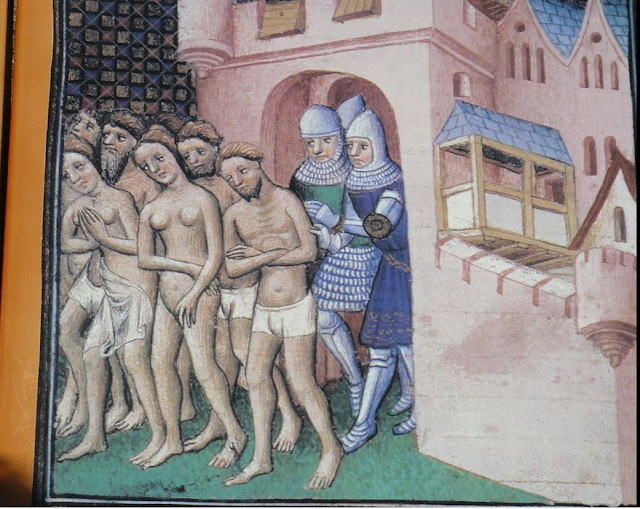 Some miles up the road, we arrived in the somnolent and isolated hamlet of Rennes Le Chateau, population 92, and no place for lunch. The history of the area is murky: first settled by Neanderthals, who were supplanted by more modern humans including Romans, Visigoths, and various medieval lords, including the Templars, until they gave way to French Royalists.

The site and its supposed history have become great fodder for conspiracy theorists and novelists since Jules Verne. But there was no wide-spread notoriety until several post-War French and Belgian writers claimed that Sauniere had discovered parchments in a hollow pillar dating from Visigothic times during his restoration that “prove” the marriage of Jesus and Mary Magdalene. But the stories faded into obscurity until the Holy Blood book hit the bestseller list in the 1980s and the BBC made a “documentary.” The documents have, of course, disappeared. Some say they vanished into the depths of the Vatican.
The “facts” have become a cottage industry with thousands of visitors now stopping at the church feed their fantasies and to fuel the local tourist trade. Books, websites, Youtube videos and podcasts abound for curiosity seekers and those who are die-hard believers. One commentator said it was the French equivalent of Roswell or Loch Ness. Others mention Atlantis. 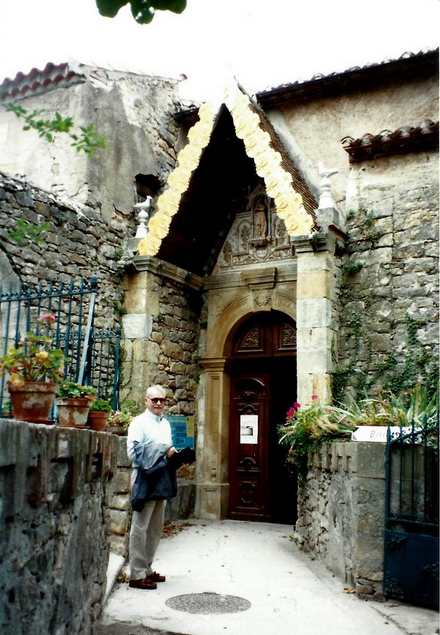 We drove to the top of the hill, the location of the curious church dedicated to St. Mary Magdalene. In keeping with that part of the world, its history is murky. When a new parish priest, Berenger Sauniere, was assigned to the church in 1885, he began to restore and radically change the church which originally dated from the 8thcentury, rebuilt in the Romanesque style in the 10th or 11thcentury. Sauniere seems to have had a shady background both in his adherence to dogma and wealth from unknown sources. He spent great sums of money on the church, a tower for his library and a large villa with extensive grounds.

But Sauniere came to a dismal end: In 1910 he was summoned to an ecclesiastical trial for various offenses against the Church and was suspended from the priesthood when he refused to produce his account books or attend the trial. He died without the Last Rites in 1917. He had been declared penniless, but his life-long “housekeeper,” suddenly became wealthy and moved into the villa.  The French government established a new currency in 1946. Rather than declare where her wealth came from, the woman, Marie Denarnaud, burnt the old francs and died penniless too. I don’t know what had been really going on but something clearly was very odd about the situation. 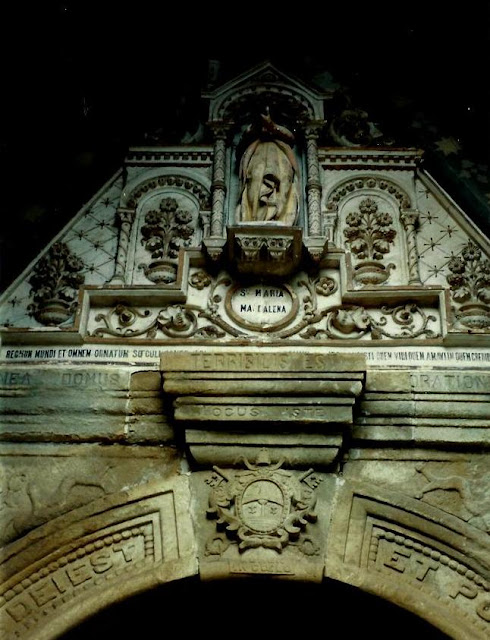 Book in hand, we approached the church, first passing a closed gateway to the church yard with a memento mori skull and crossbones as décor over the door. We reached the main entrance and looked up to see the Latin inscription “Terribilis est locus iste” carved on the lintel. Depending on your inclination, it can be translated as “This is a horrible place,” or less dramatically (and less nysterious), “This is a place of awe.” 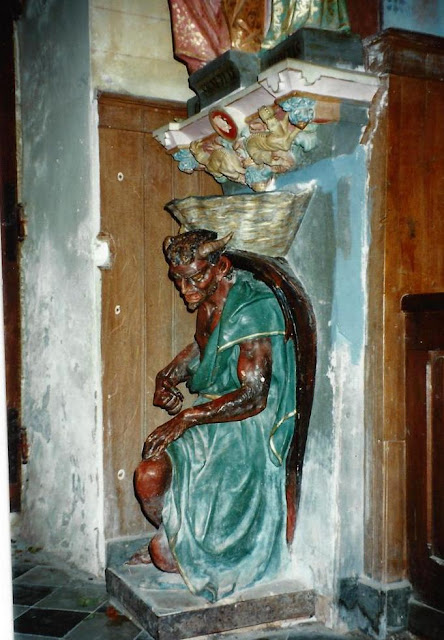 Whichever is correct, the words established a mood that wasn’t dispelled when we entered the nave and approached the holy water stoop supported by a horned and cloven-footed devil. For those who don’t believe in conspiracies, the choice can be explained by looking at a catalogue of church refurbishments published in during the period. Still, it seems less than suitable and not a place where I’d want to dip my fingers. Specialists have found other anomalies but these two were enough for us. The church was dark and damp and gave us the creeps. It was easy to imagine flickering candles casting moving and distorted shadows over dark rites with pagan roots. Was the church ever used for happy events like marriage or baptism? Whatever its current use, I couldn’t wait to get out into the clean air. 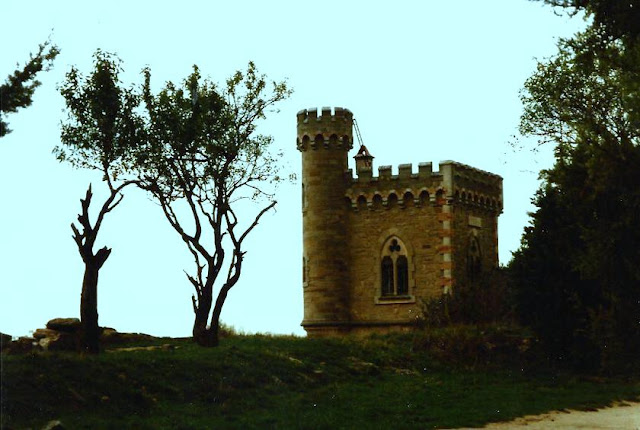 We wandered toward the disused tower which had been the good father’s library. It, too, was dedicated to Mary Magdalene. In keeping with the general desolation, the stained-glass windows had been broken by vandals. Pieces of glass lay scattered on the ground. I couldn’t resist picking up a handful for a memento of a most peculiar place, neither horrible nor of awe, but all the same, unsettling. But rather than stuffing the shards in my pocket, I let the glass fall through my fingers, back to the ground where they could await some other curiosity seeker.
It was definitely time for more mundane and contemporary activities: a late lunch in Limoux, famous for it’s sparkling wines and good food. We dined on cassoulet, and raised our glasses to the authors of the book who provided  endless fodder for conversations about the past.
Photos except Carcassone copyright Judith Works
Photo of Carcassone copyright bmsgator from Wikipedia