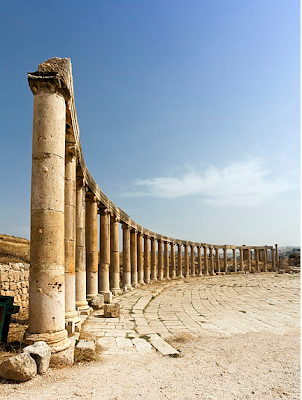 “Allahu Akbar, Allahu Akbar” rang out over the city, echoed by calls from other mosques. The sound, the essence of the Middle East, was our wakeup call in golden-hued Amman, and it accompanied us on our week-long tour of Jordan

We stood at the entrance to our hotel waiting for Ahmed, our man for a week.  Suddenly, a Mercedes pulled up and men in black jumped out brandishing their AK-47s. The next Mercedes arrived, squealing tires as it came to a stop. A young woman in tight jeans bounded out of the driver’s side. She was a Jordanian princess, a representative of modern Jordan who looked nothing like the drab and dumpy women dressed in headscarves and long coats or gowns we were soon to see outside the city.
Ahmed arrived in a more subdued fashion. We loaded up and climbed in, driving north to Jerash. As we drove, he valiantly tried to teach us some Arabic, mostly on the order of hello and goodbye. (We had already mastered “thank you,” shokran.) Watching the dry scenery pass, we repeated assalaamu alaykoom, wa alaykoom asalaam and ma assalaamehover and over to each other until we began to sound like wind-up toys. Meanwhile, Ahmed talked to his friends on his cell phone with one hand on the steering wheel. Every one of these frequent conversations started with “ciao,” and finished with “ok, bye-bye.”  After telling us about his stay in Rome, we switched to a mixture of Italian and English always punctuated with our by now fluent hello and goodbye in Arabic.
On our way to Jerash we passed one of the enormous refugee camps housing generations of Palestinians who fled or were displaced from Israel. The inhabitants are not likely to go anyplace, being a convenient excuse for the endless political maneuvering in that part of the world. Meanwhile, they lived marginal lives, depending on handouts and other aid to counteract the massive unemployment and the burgeoning population.
Our first stop was the deserted Ottoman village of Umm Qais where we stood on a terrace gazing at the Golan Heights, the Sea of Galilee and the city of Tiberias in Israel, all off-limits to Palestinian exiles. On our trip to Israel we had ascended halfway up these Heights where we stopped at a viewpoint with the small country spread out before us. Now, in Jordan we were looking at the other side of the coin, standing where homesick Palestinians came to look at their former homeland. 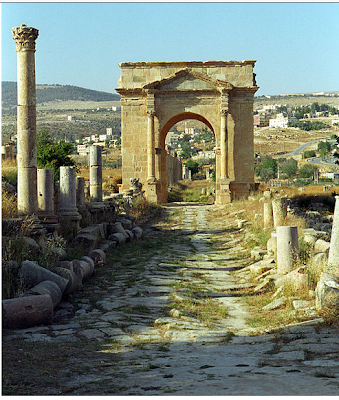 Jerash is a better preserved Roman city than many in Italy. We meandered in the hot sun gazing at the ruins of temples, theatres, and Hadrian’s Arch along with Byzantine churches with their intricate mosaic floors still showing through the dust. We rested in the shade of the columns in the Oval Plaza. A breeze made the columns sing as they moved ever so slightly to ease the pressure of wind or earthquake, exactly as the Roman builders intended. The gaps were large enough between some of the sections of column we could have inserted a piece of paper in between. They reminded me of the spaces between the stones at the Wailing Wall in Jerusalem filled with paper inscribed with prayers. After we left, I wished I had slipped a note into one of the gaps asking (unrealistically) for peace.

As we drove along a winding road on the way to the Dead Sea, men riding small donkeys and others leading camels accompanied us. The road descended, down and down to the lowest point on earth. Instead of crabbed veterans bobbing in the mineral-thickened water trying to ease their wounds on the Israeli side, women covered in black with only their kohl-ringed eyes on view sat in the shade of the hotel terrace. Gloves covered what little could have showed below the jet-beaded sleeves of their elegant gowns of finely woven wool. While they chatted, their husbands and children relaxed nearby, enjoying their freedom to splash and float. As night fell gardeners watered the lush gardens flourishing in an unforgiving environment. 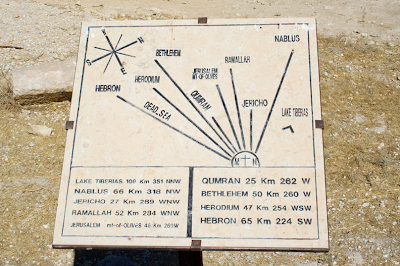 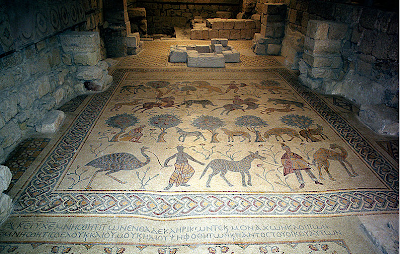 Jordan was like Israel in its archeological sites, marvelous Roman ruins, early Christian churches, Crusader castles and those built by Salah ad-Din. But it also had Ottoman villages, some falling into ruins like one overlooking the Sea of Galilee and others, like Taybet Zamen, where we stayed in Petra, restored. We passed the site of Herod the Great’s fortress, where Salome danced and demanded the head of John the Baptist. Dried grasses surrounding the few stones blew in the wind and kestrels wheeled overhead in the updrafts from the Dead Sea. We stood on Mount Nebo, where Moses viewed the Promised Land, dying before he could cross the Jordan. Near the Byzantine churches with ornate mosaic floors overlooking the barren landscape, a small stand had fossil seashells for sale. Souvenirs of a site even older than Moses, they continue to remind me of this ancient place.

Not far from Petra we came upon a man wearing the red-checked keffiyeh sitting astride his horse high on a hill watching us. Maybe he was the reincarnation of Lawrence of Arabia or a member of the Desert Legion. Whoever he was, like the muezzin’s call, the sight was an indelible part of my vision of the Middle East. Near the tourist complex of Petra black goat hair Bedouin tents stretched out in canyons. The Bedouin’s flocks of goats and sheep grazed in the sparse vegetation nearby as the light faded. We arrived after sunset, grateful to relax in our old Ottoman home, complete with a sybaritic bath. The other occupants of the hotel complex seemed to be a group of Israelis who kept close together in the restaurant. They looked uncomfortable, out of their element. 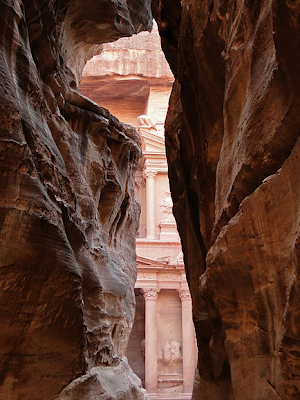 The following morning I opened the door of our room. Before me was an endless sea of rocks fading slowly into the haze of an impenetrable desert.  How caravans found their way to the fabled “rose-red city half as old as time” was beyond my comprehension. Three days of walking and climbing didn’t begin to complete our explorations. The sandstone used for the buildings and rock carved tombs are shot with ribbons of rose, blue, green, red, and yellow. The architecture is a felicitous combination of Roman and Assyrian elements: columns, architraves and ziggurats. Who designed them, who carved them, who lived in them and who was buried there? I wanted more time to sit on one of the cliffs and dream of this ancient civilization and of the caravans that had passed by, the camels laden with silks and spices slowly walking along on their endless journeys. 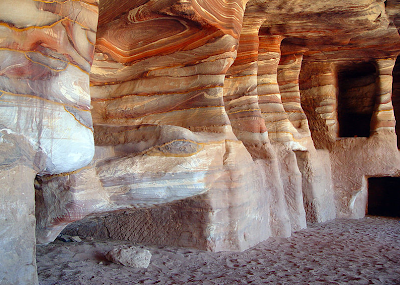 But our time was done. We took the die-straight Desert Highway though the empty landscape back to Amman, another of my travels finished too soon.
photos courtesy of Wikipedia