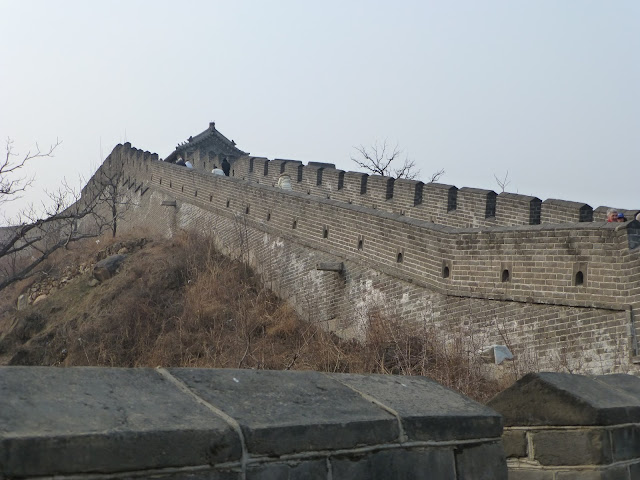 Instead of the sound of millions of tourist feet pounding the section of the Great Wall closest to Beijing, there were only 160 – that is, those belonging to 79 people and me to the section known as Hangyaguan, two and a half hours from the port of Tianjin. 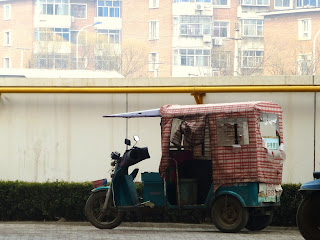 We stopped for an early lunch in Jixian, a scruffy city and a marked contrast to glitzy Shanghai. Piles of rubble were everywhere, as if the city had been bombed. In reality, it was the mark of land cleared by the Chinese government for high-rise apartments as it prepares to relocate 250 million rural peasants to urban environments (and very uncertain futures). Many citizens rode bicycles but some used odd pedicabs.

The hotel, our lunch venue, may have been grand at one time with elegant chandeliers hanging in the stairways.  My view, as I trudged up the stairs to the ballroom/restaurant, was of fixtures so coated with black grease only a dim light passed through the prisms.  The table was laid with the typical lazy Susan in the middle. Platter after platter arrived at the tables, with rice, the least expensive food, served last to signify that there were enough vegetables, chicken and pork to satisfy everyone beforehand. And, despite the dreary surroundings, the food was excellent. 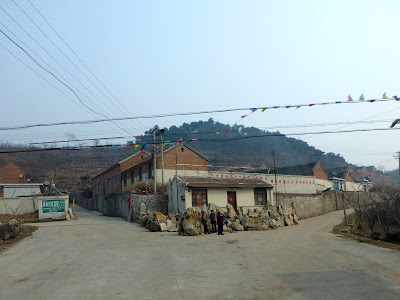 Meal finished, it was time to leave the flat plain and enter the hills to the 26 miles remaining of the Hangyaguan, Yellow Cliff Pass section, of the Great Wall. On the way, the bus wound through marble and granite hills set with cypress, juniper and pines looking exactly like a scroll painting on silk. We passed several not-at-all picturesque impoverished hamlets where a few shops sold chunks of contorted rocks, so beloved by the Chinese for their gardens. A few people were cooking with charcoal in their walled courtyards, otherwise the settlements seemed nearly deserted. Perhaps the other inhabitants had already been relocated. 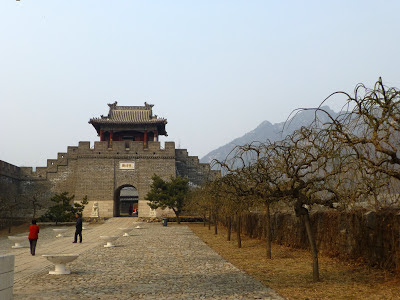 Finally, the Great Wall was before us. And great it is – stretching into the distance in either direction from the entrance. Workers were chipping away at worn timbers and crumbling stone on several of the watch towers in an effort to keep a structure, begun in AD 550 and reinforced at various times between 1368 and 1644, from collapsing.  Our energies were concentrated on actually climbing the steep stone steps and paths, incredibly now the site of an annual marathon that attracted some 2000 runners last year. It’s hard to imagine a place where millions died building and rebuilding a structure now being used for tourism and sport. 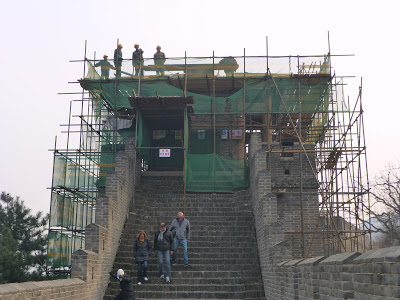 As I walked on the crenelated ramparts and climbed to the towers I tried to imagine the lives of the soldiers and watchmen and the desperate peasants who died in uncounted numbers building and maintaining the wall. How many in this section alone, and how many on the entire length of the wall, over 4000 miles stretching from the sea to Tibet. In the end the wall was ineffective, breached by the Mongols in the 13thcentury and the Manchu in the 17th.  Only a few sections have been fully restored, the remainder left for time to take its course. 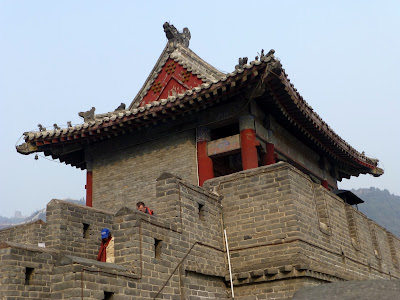 Not being a marathoner, I climbed until I was huffing and puffing before stopping to watch the workers replacing timbers and stones on the towers. 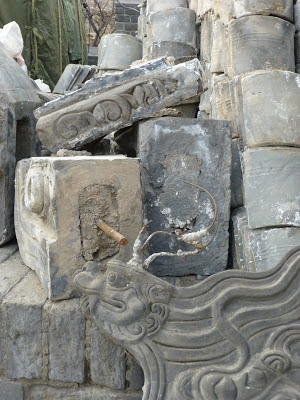 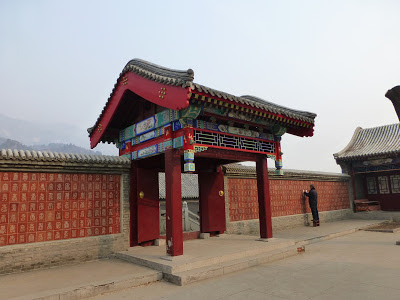 As the late afternoon chill set in it was time to turn back to see the Hundred Generals Stele Forest and Longevity Garden, empty except for a lone Chinese man, and then to eye the selection of trinkets and food set out by locals who numbered about as many as our group. 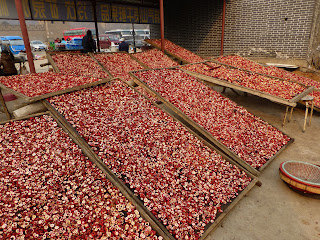 Besides the usual junk, there were copies of Mao’s Little Red Book and a few posters, local “wine” and dried fruits, especially what looked like sliced crabapples but was probably jujube. The vendors and their chubby-cheeked children were all smiles as the members of our group bought over-priced souvenirs. 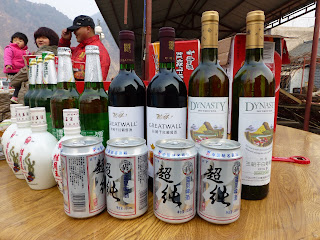 Everyone happy, cold and tired, it was time to head out. As we left, I took a last look across the Juhe River to see the other section of the wall rising nearly vertically up the distant hills and into the spring evening mist.