By
judithworks
on
The narrow road from crowded Amalfi twists and turns while it ascends to Ravello, my idea of heaven on earth. Reaching the town requires effort as it does to reach paradise, in this case not by good works but by skillful driving. Looking down into the deep Valley of the Dragon below me as Glenn navigated the steep and sharp turns I could see tiny flat spaces filled with lemon trees, a small house with smoke rising from the chimney and one or two seemingly inaccessible B&Bs nestled on the vertiginous slopes. It was bitterly cold and windy on our last visit but the sun was shining in the clear blue air when we reached our goal, a town suspended between the sea and sky. 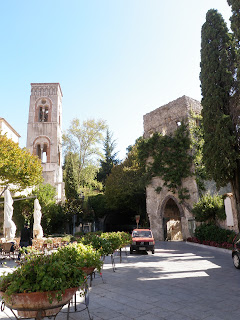 We parked near the new concert hall designed by Oscar Niemeyer. Its jarring design looked to me like a gigantic eye out of character to the surroundings.. We turned away from its hard gaze to enter the mellow and harmonious town center, the Piazza Vescavado. The sunlight fell on the piazza, the 11th Century Duomo, the Moorish-style Villa Rufulo and two bars with tables defiantly set outside despite the temperature. We joined determined sippers nursing their cappuccini while keeping hunched up against the cold. 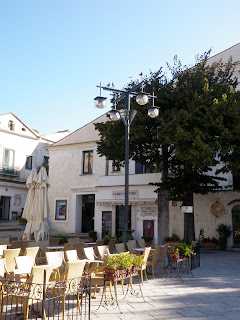 The economy of Ravello is based on painted ceramics, limoncello, a famous summer festival where guests can contemplate the infinite blue coastline, sea and sky while enjoying the music, and beautiful luxury hotels to accommodate sybarites. Perfection. 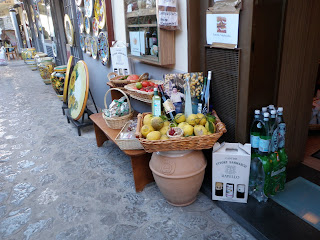 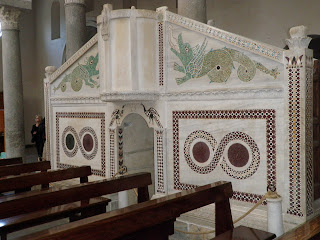 Our goal on this short visit was simply to brighten our memories before we headed off elsewhere for new sights. As usual we started with a visit to the Duomo, one of my favorites because of its beautiful medieval decor. The cathedral, founded in 1086, is graced with mosaics of fantastic animals and the sinuously curling designs typical of the period, often called Cosmati work, after two brothers who popularized the style in medieval Rome. The elaborate layouts consist of strips of small triangles, squares and other shapes made of red porphyry, green serpentine, gold glass and black marble in concentric, intertwined or other geometric motifs set into white marble. The shapes often curve around large disks of colored stone as they move across the surfaces, snake-like. 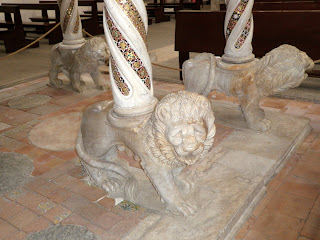 On an earthy note, the large free-standing pulpit is supported by six spiral pillars in turn supported by six anatomically correct lions, three females and three males. The females have their tails off to one side, seemingly waiting for their partners. The priest must have had difficulties keeping the parishioners’ attention with this visual competition. The religious iconography escaped us but the quality of the sculpture was superb.
Other religious artifacts attracted our ever-curious eyes: vials of St. Pantaleone’s holy blood which is said to liquefy on July 27th, part of St. Thomas’ finger bone and Santa Barbara’s skull held in a gorgeous reliquary done up in gold and silver. These leftover pieces are a grisly pleasure to behold although the treasures in Ravello cannot hold a candle to those in Baroque Rome where there must be enough to make several new saints if they were all put together. 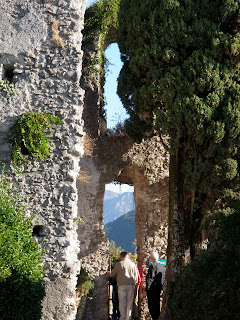 Our minds full, we turned to the idyllic Villa Rufolo and Villa Cimbrone, the best places to contemplate the beauties of the Amalfi Coast where delight is present in every direction: gardens with sub-tropical vegetation, statuary, fountains, towering cypresses, the sea far below and the sky far above. No wonder so many artists came to the town to paint, write, or think although the reality is that the town was founded in the 5th century as a shelter, inaccessible to the barbarians on the coast.
It is hardly possible to leave without buying a brightly painted plate or bowl. As usual I succumbed to a bowl with brightly painted lemons and a bottle of limoncello. Visions of a long summer lunch played in my mind, an aperitivo of the liqueur served ice-cold, followed by a Caprese with  mozzarella di bufala, and then pasta primavera showing off in the new bowl. 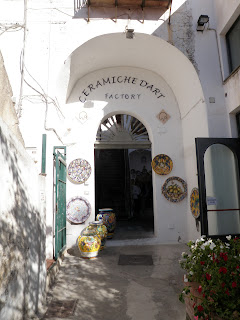 Ah – the delights of Italy.