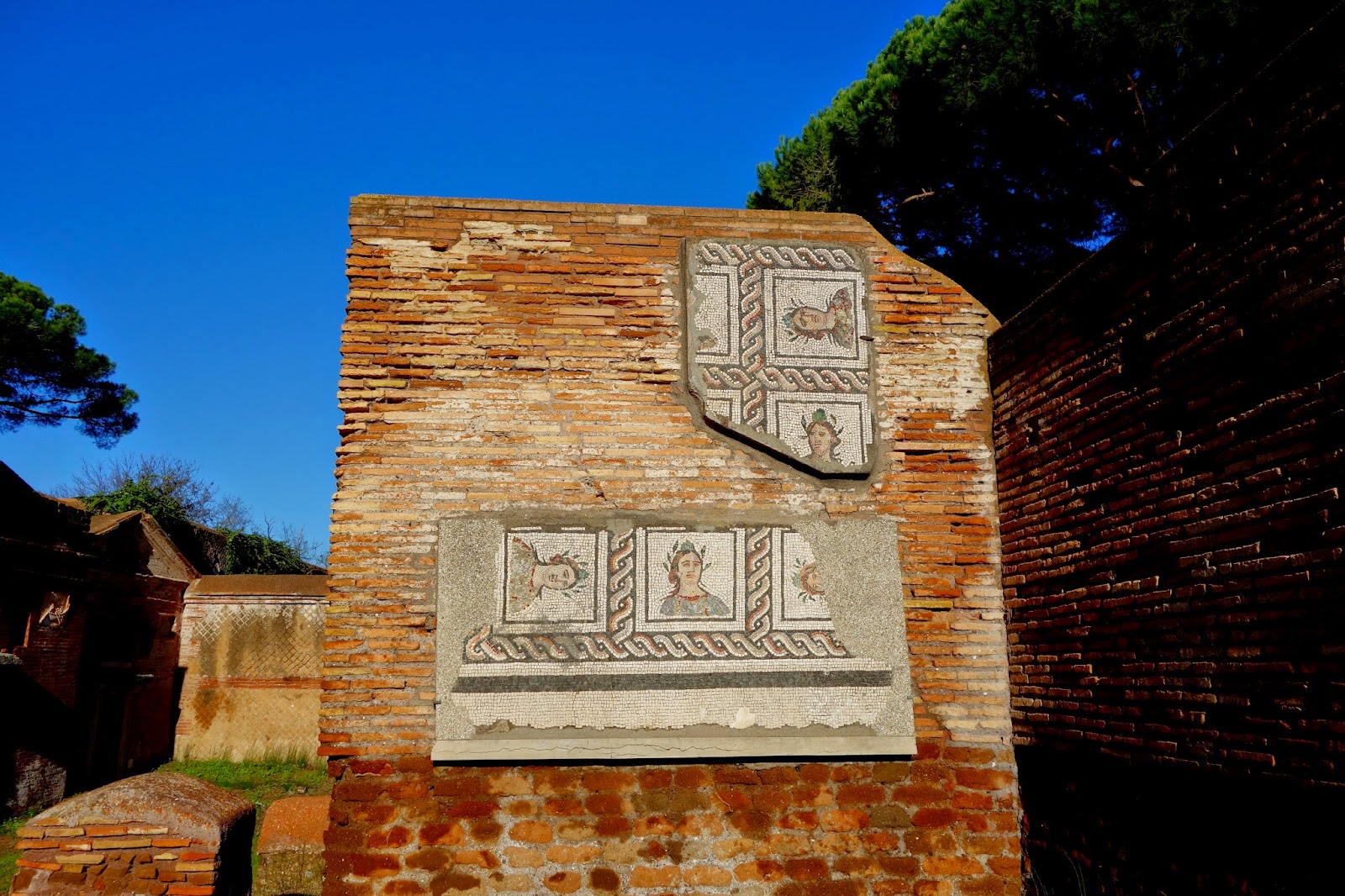 When in Rome it is always fascinating to follow the lives of ancient Romans. We read and see so much of corporate grandeur that it is easy to forget that individual Romans were real people with families. Families who had a preference for staying together in life as well as in death. When the inevitable happened the remains were often kept in mausoleums so the living could gather in memory of the deceased.

The best preserved of these memorials is the Vatican Scavi underneath St. Peters, where the wealthy went to their eternal rest. But if you want to wander in the sun among the middle class and common people’s tombs, a visit to the Necropoli di Porto is a place to spend some time. That is, if you can find it and get reservations. The Necropolis is located between the airport at Fiumicino and the mouth of the Tiber River on Isola Sacra and is not well signed. The famous ruins of Ostia Antica are a few miles away. (The whole ancient port area is now part of an enormous archaeological project called the Portus Project. The website is www.portusproject.org if you are interested in knowing more.) 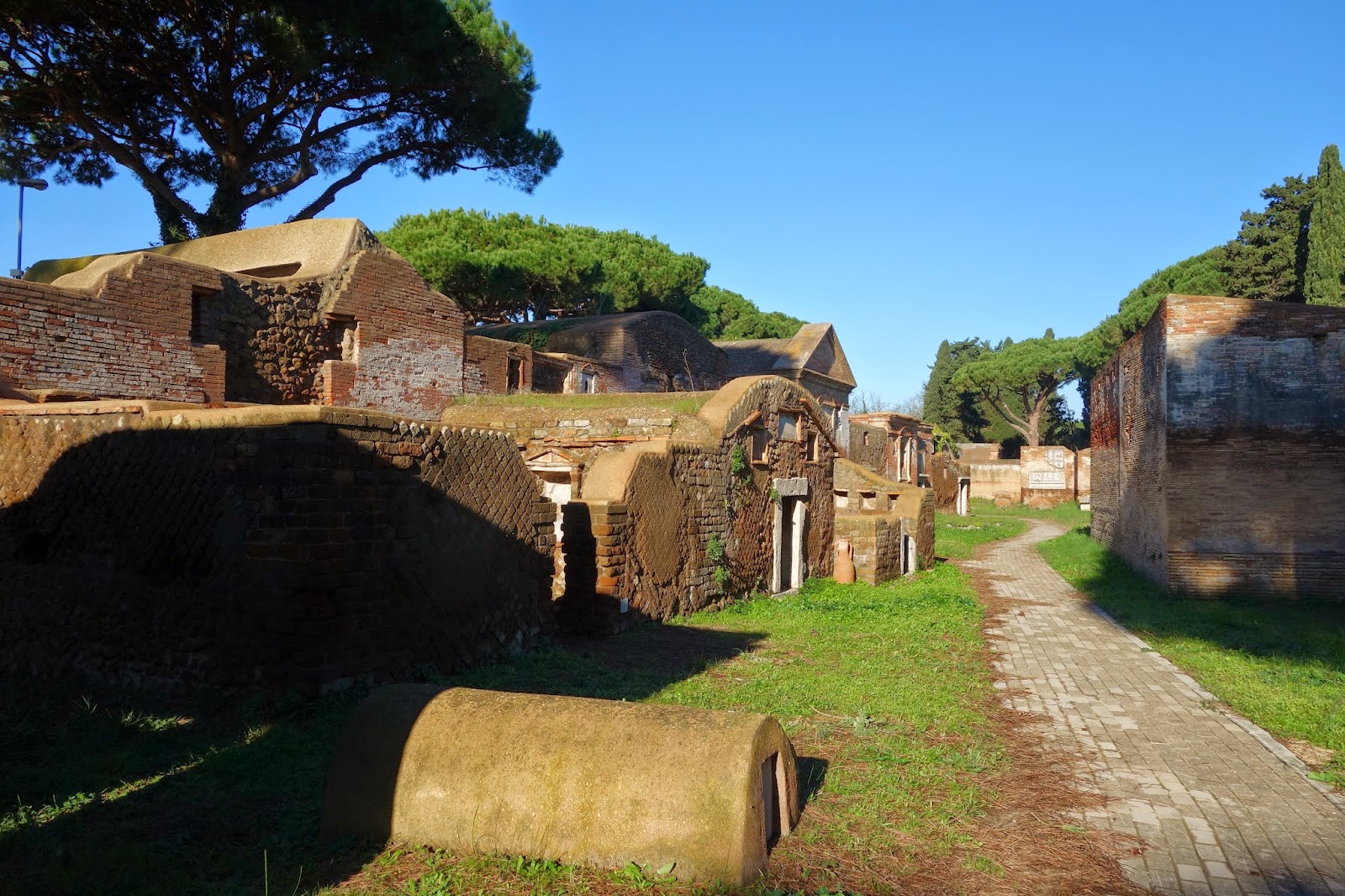 The necropolis, a true city of the dead, is across a canal begun by Emperor Trajan for a direct connection between the meandering Tiber and the sea. After the fall of the Empire the area was gradually abandoned as it silted up and became a malarial swamp. It was reclaimed in 1920 and much of the land was turned into market gardens. 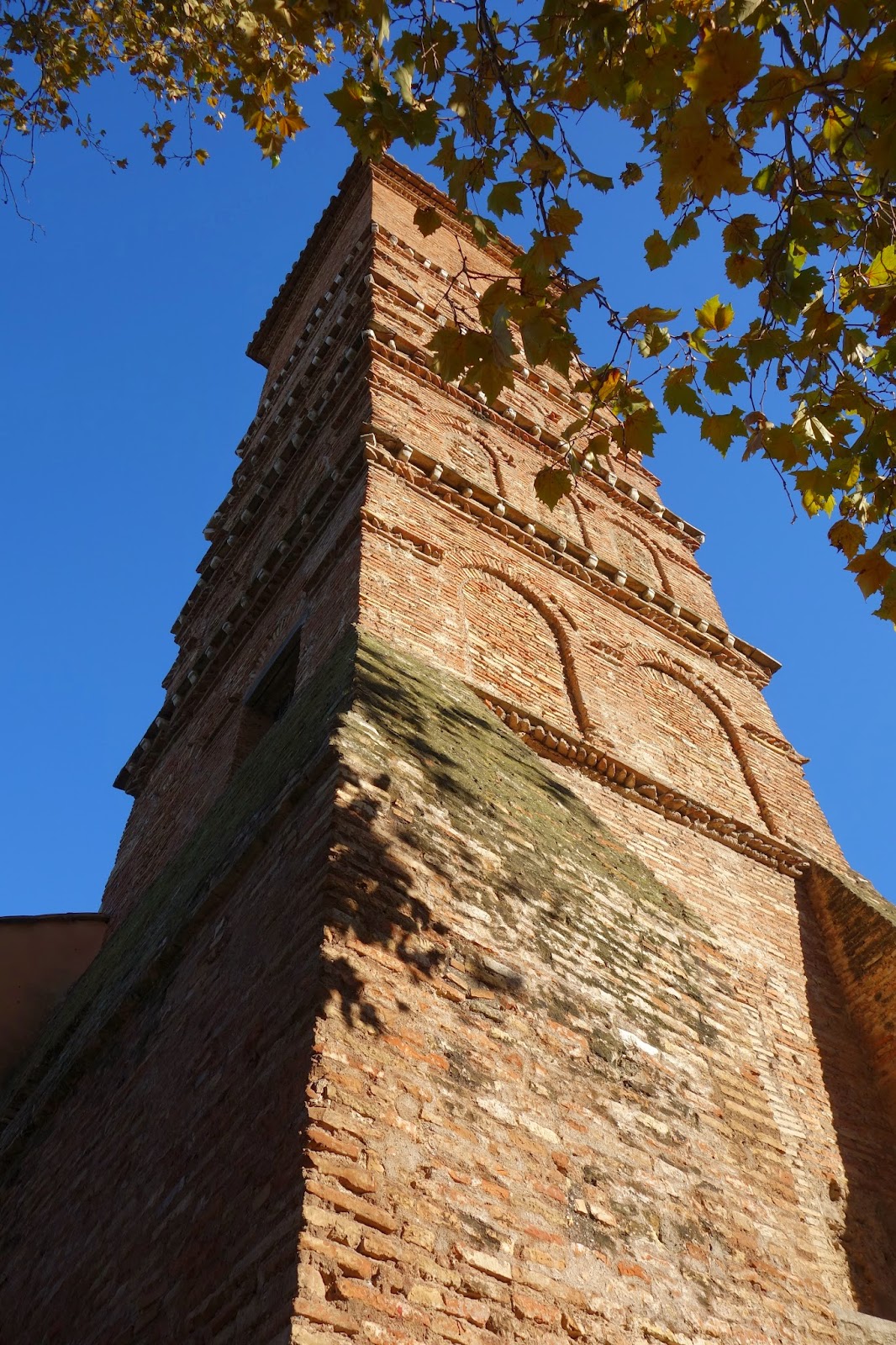 We began our tour at the ruins of the Basilica of Sant’Ippolito, constructed in the 4th Century over an earlier complex of baths, only uncovered in the 1970s. The church continued as a place of worship through the 13th Century. The Romanesque bell tower was converted to a watch tower by Pope Gregory XIII in 1585. The church houses some of the artifacts discovered at the site. 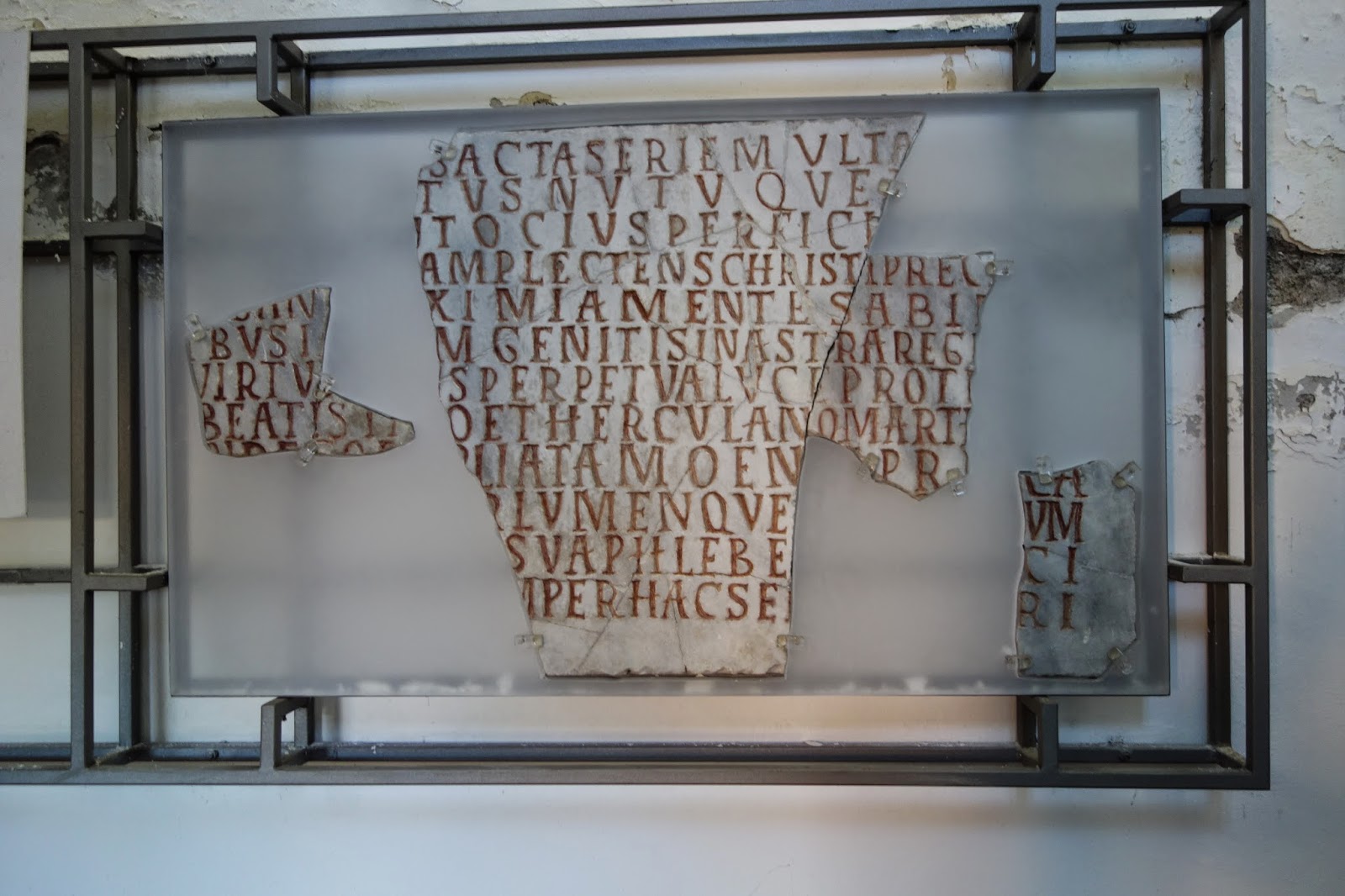 It is a short walk from the church to the necropolis where the remains of  merchants, artisans and ship owners from Trajan’s port were to enjoy their sleep. The area is now protected by a chain-link fence and an on-site custodian but no actual remains are left, all lost long ago to the depredations of animals, antiquities hunters and archaeologists. Because the cemetery is so obscure not only are there no actual dead occupants, there were only a few other live ones wandering around when we visited. 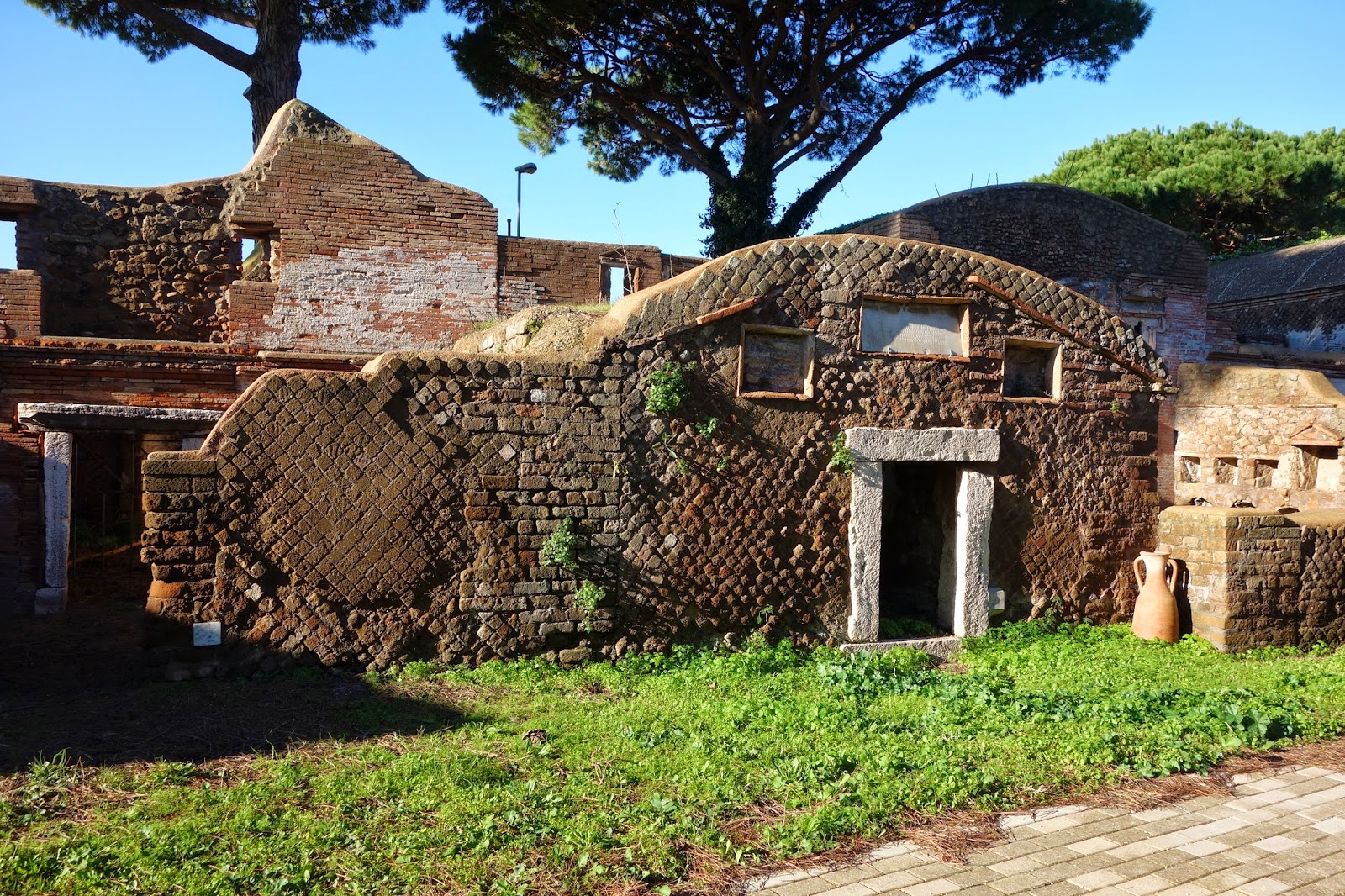 The chamber tombs are rectangular, similar to little houses with door, thresholds, windows and terraces with couches for funeral feasts. Many face a cobbled road known as the Via Severiana that ran down the coast, now much farther away than in ancient times. 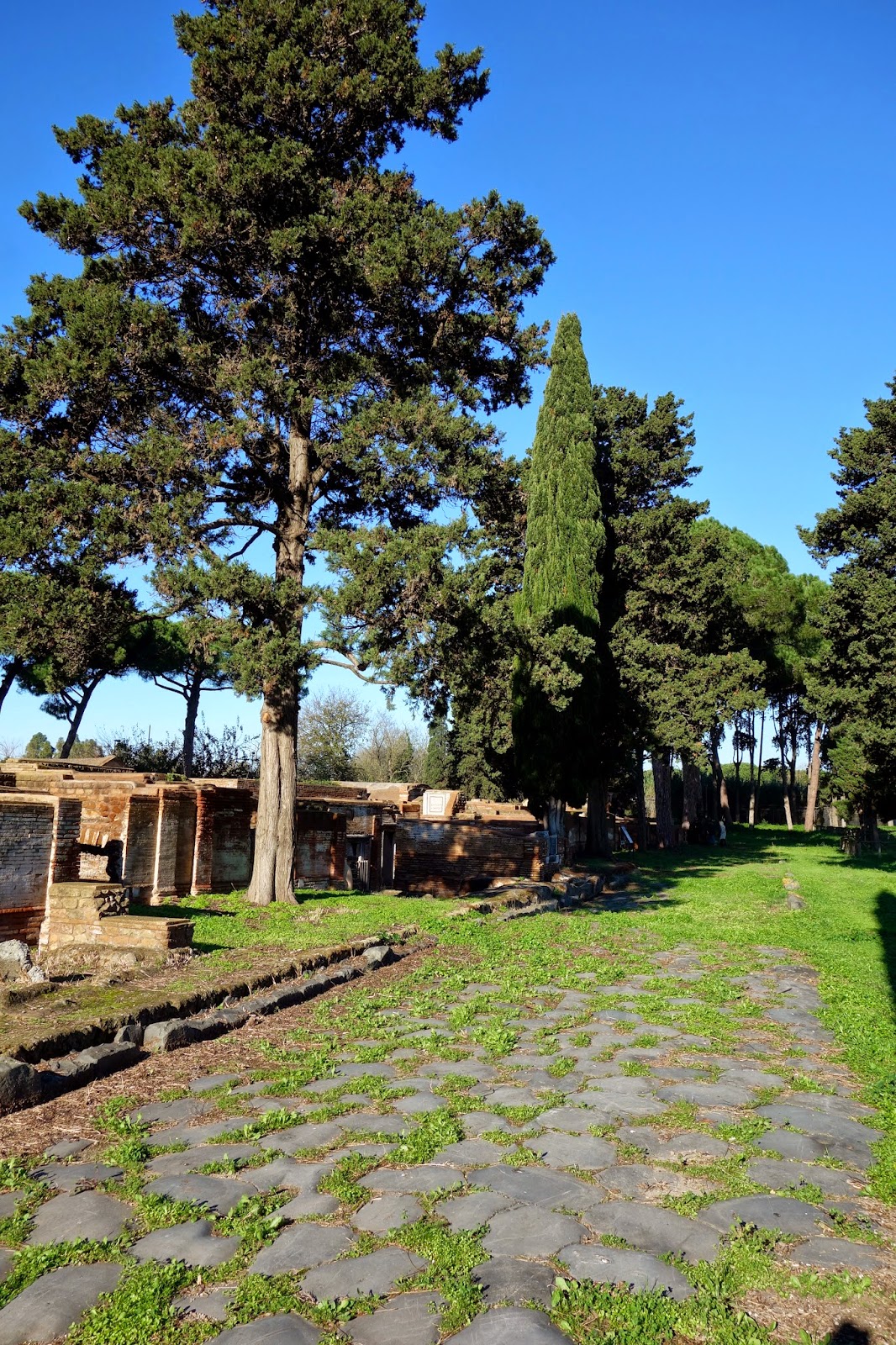 Outside some of the buildings are amphorae used to pour libations into the tomb. 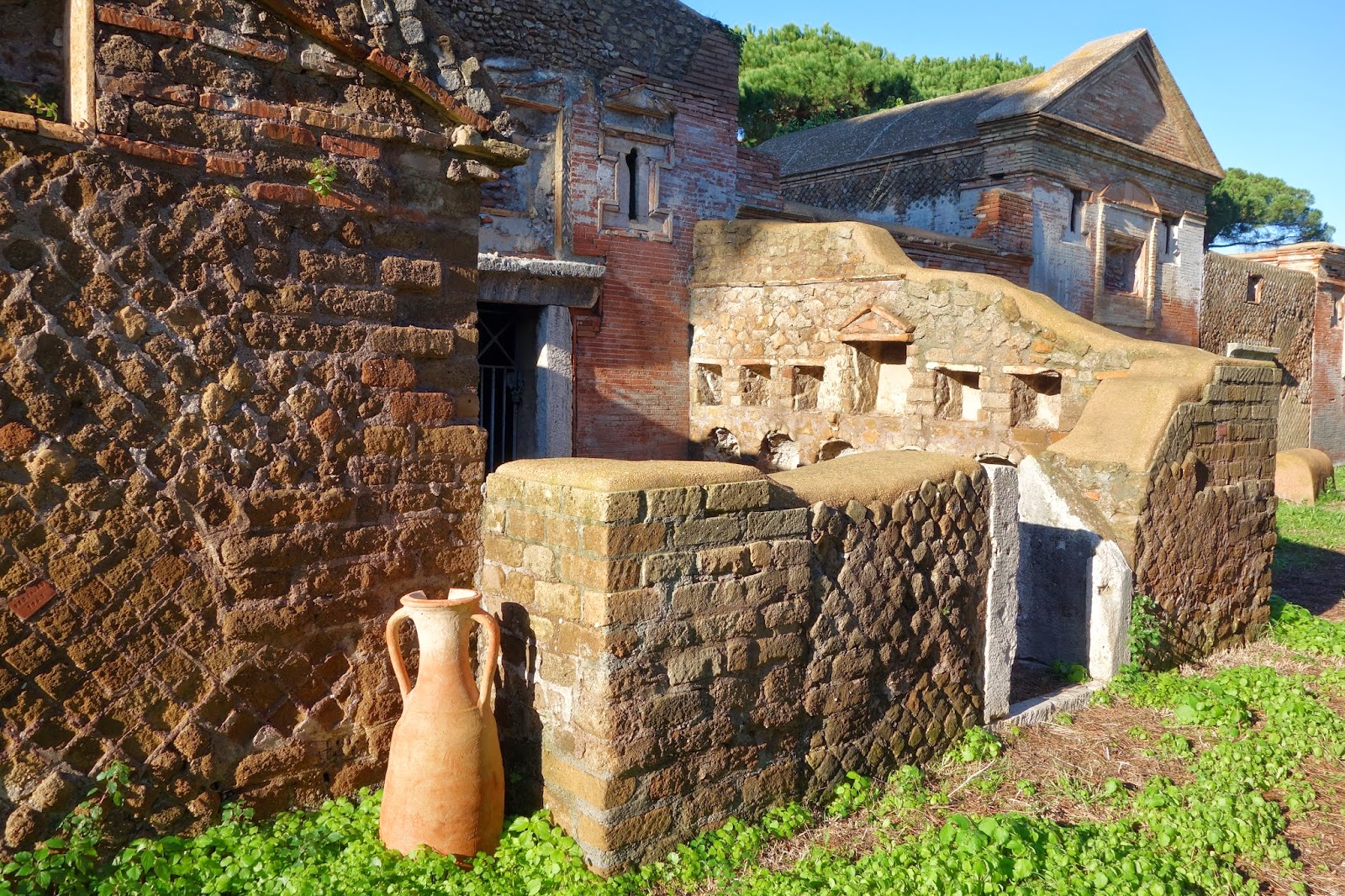 The occupation of the deceased was often memorialized by a sculptured plaque showing activities such as those of a grain merchant or ship owner. One tomb has a mosaic of an African elephant, probably a strange sight to a member of the family visiting Africa. 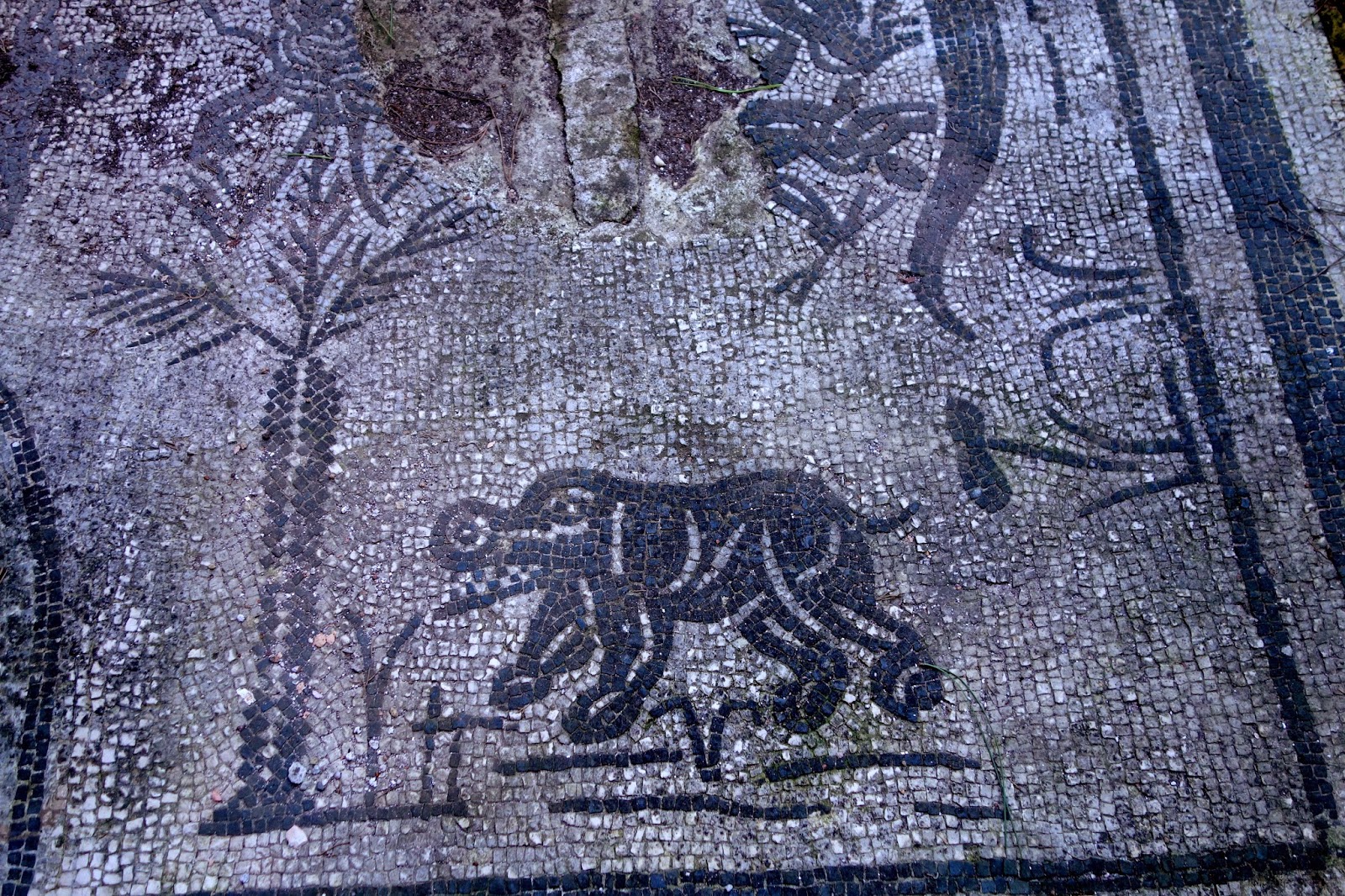 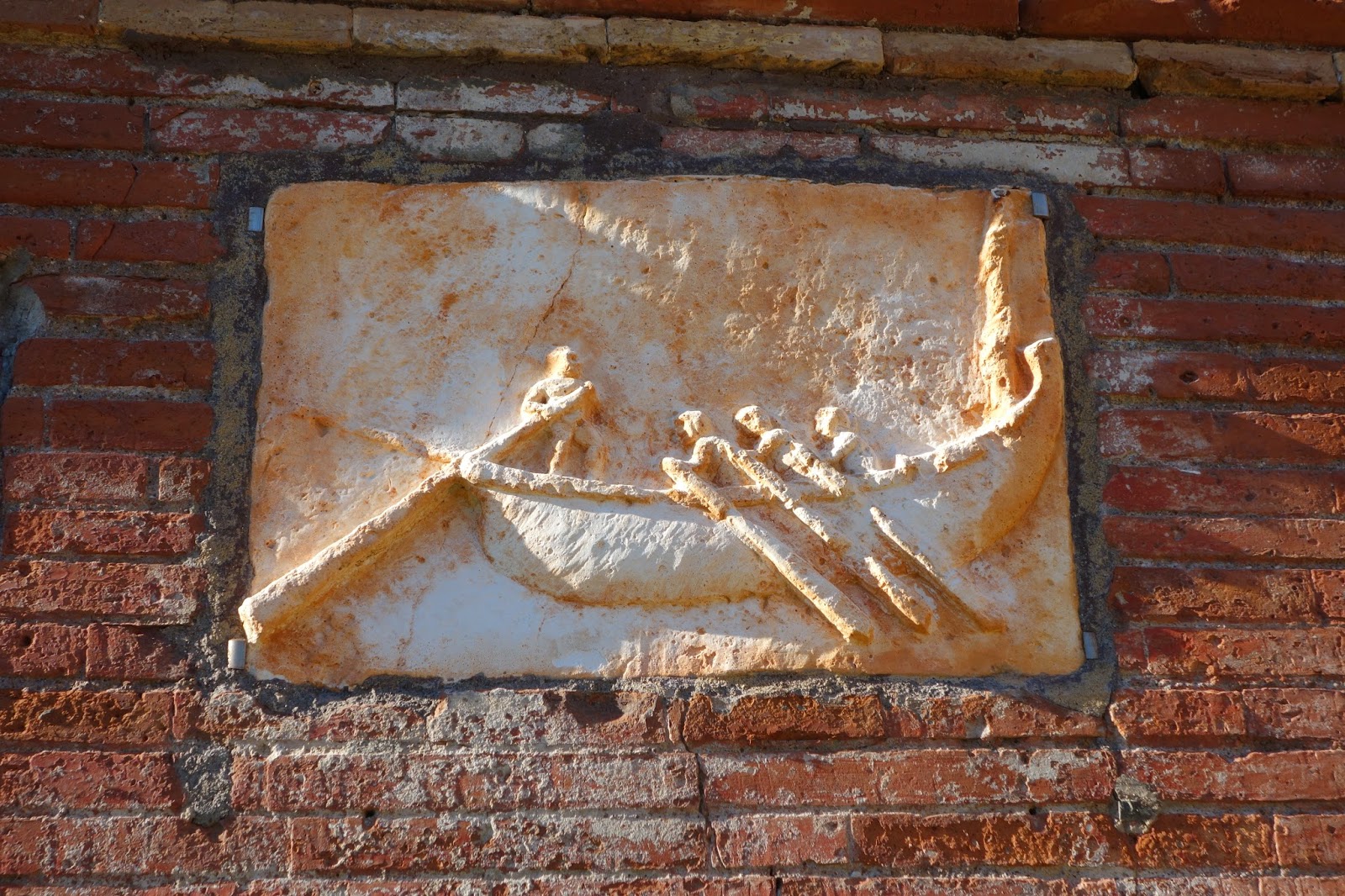 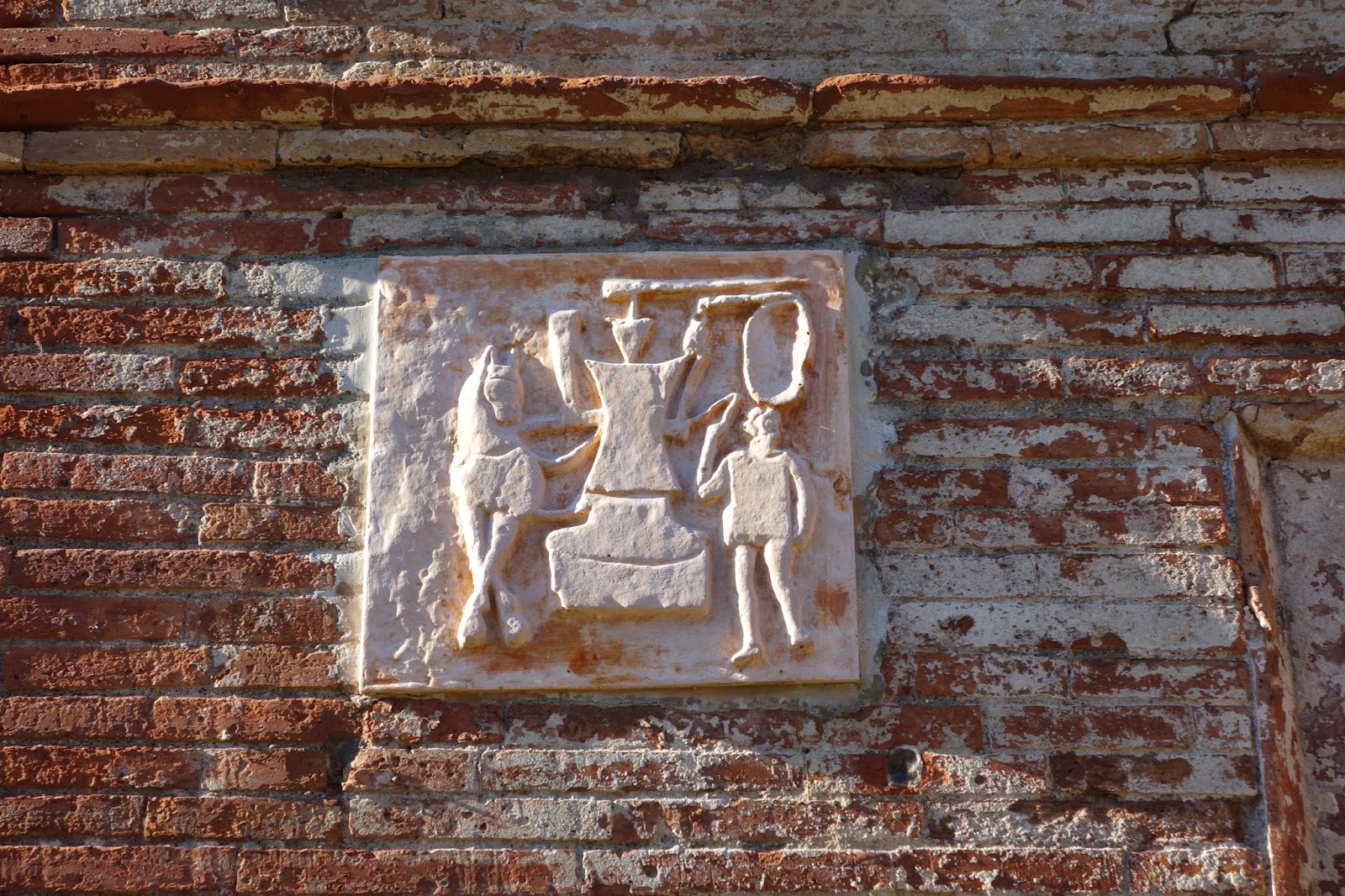 Another tomb has a mosaic of the lighthouse and two ships, no doubt a welcome sight after a perilous sea voyage. 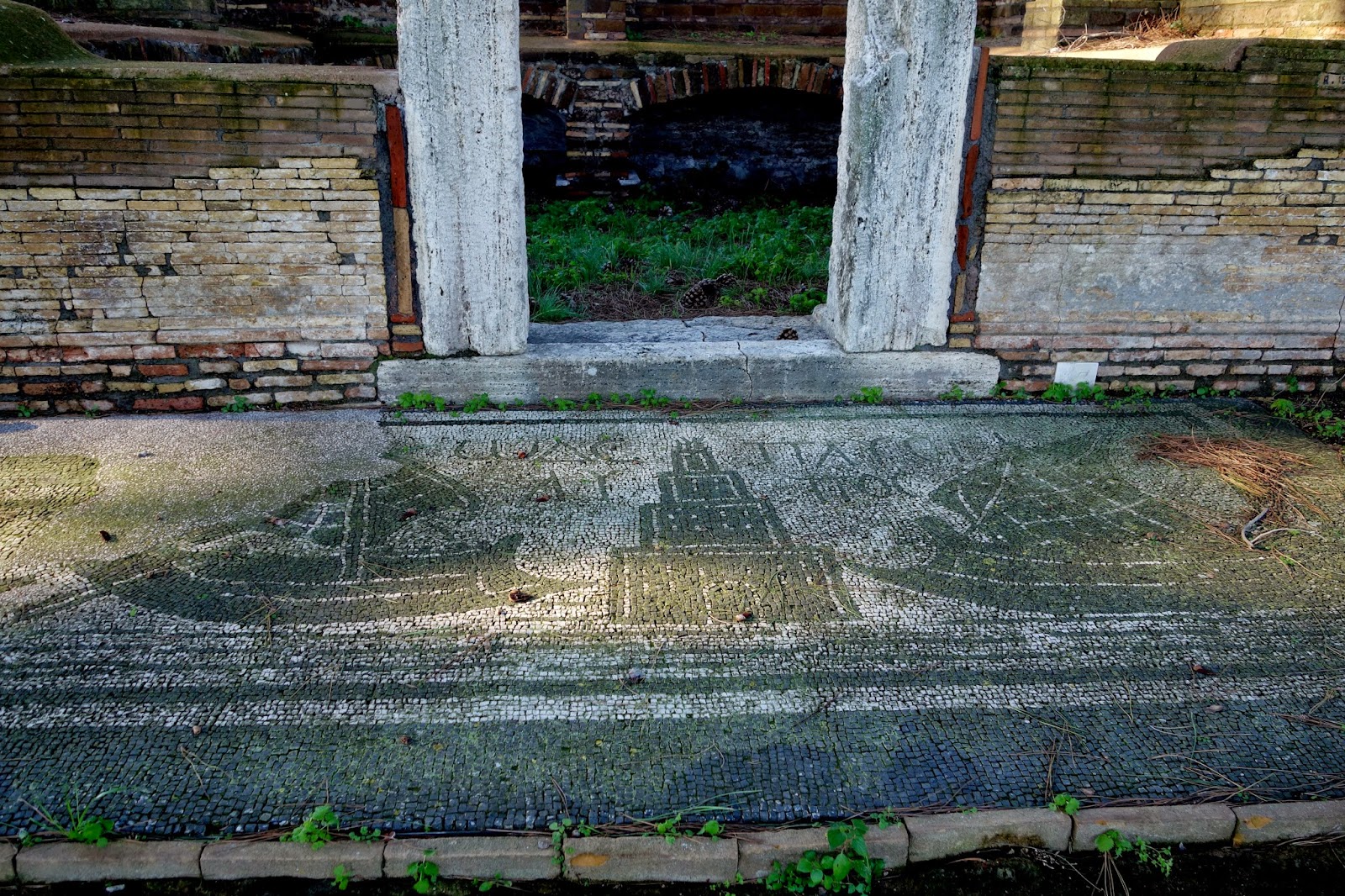 But the poorer could not afford such fancy memorials. They are buried in the ground under what looks like dog houses or little old-fashioned traveling trunks. Others only have simple tiles forming a peaked roof. 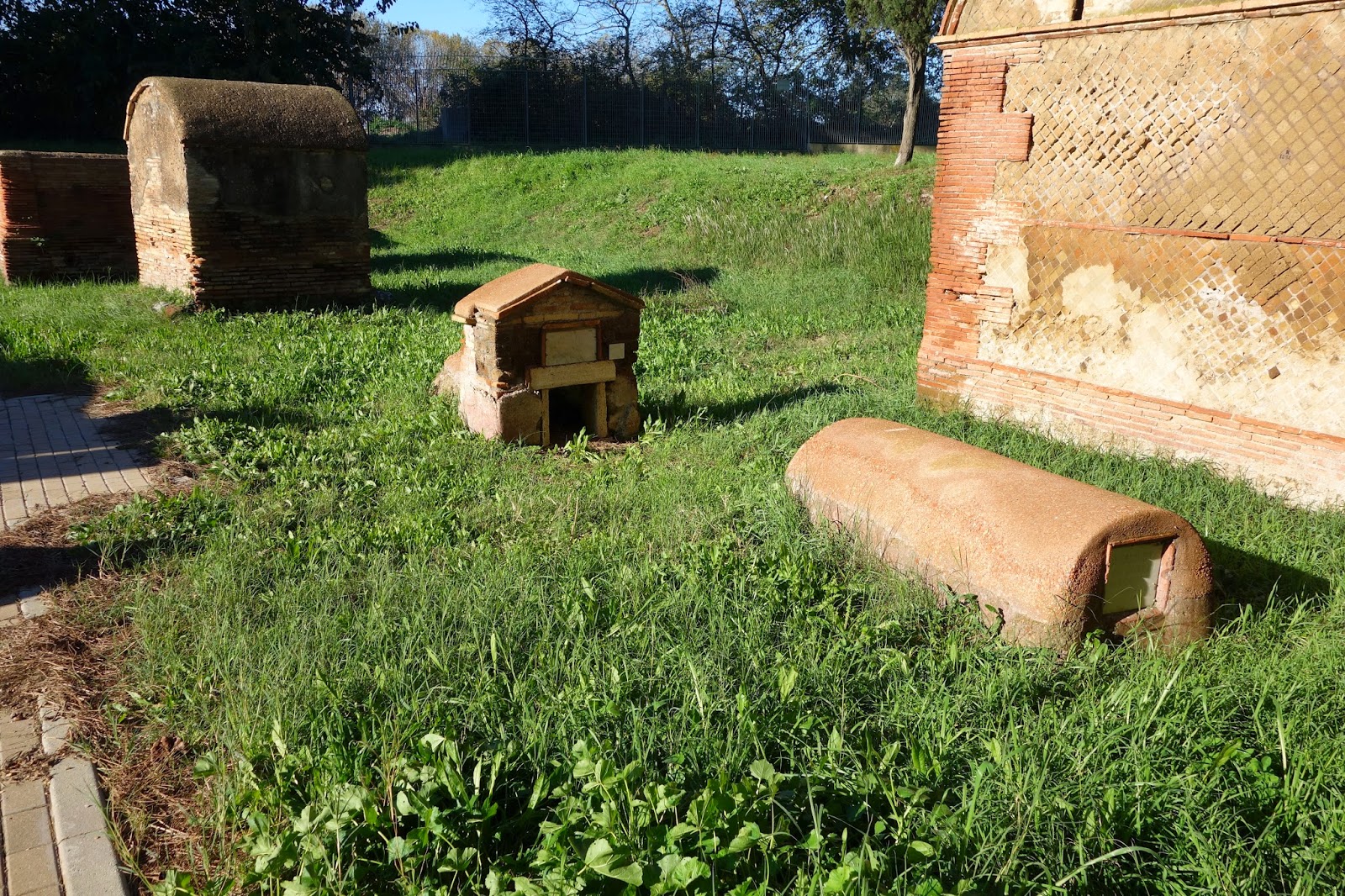 It’s hard to imagine what the lives of these humble souls lives could have been like – sailors stranded far from home, dock workers or laborers, all long forgotten except for the occasional wanderer, like us, who briefly wonders who they were. 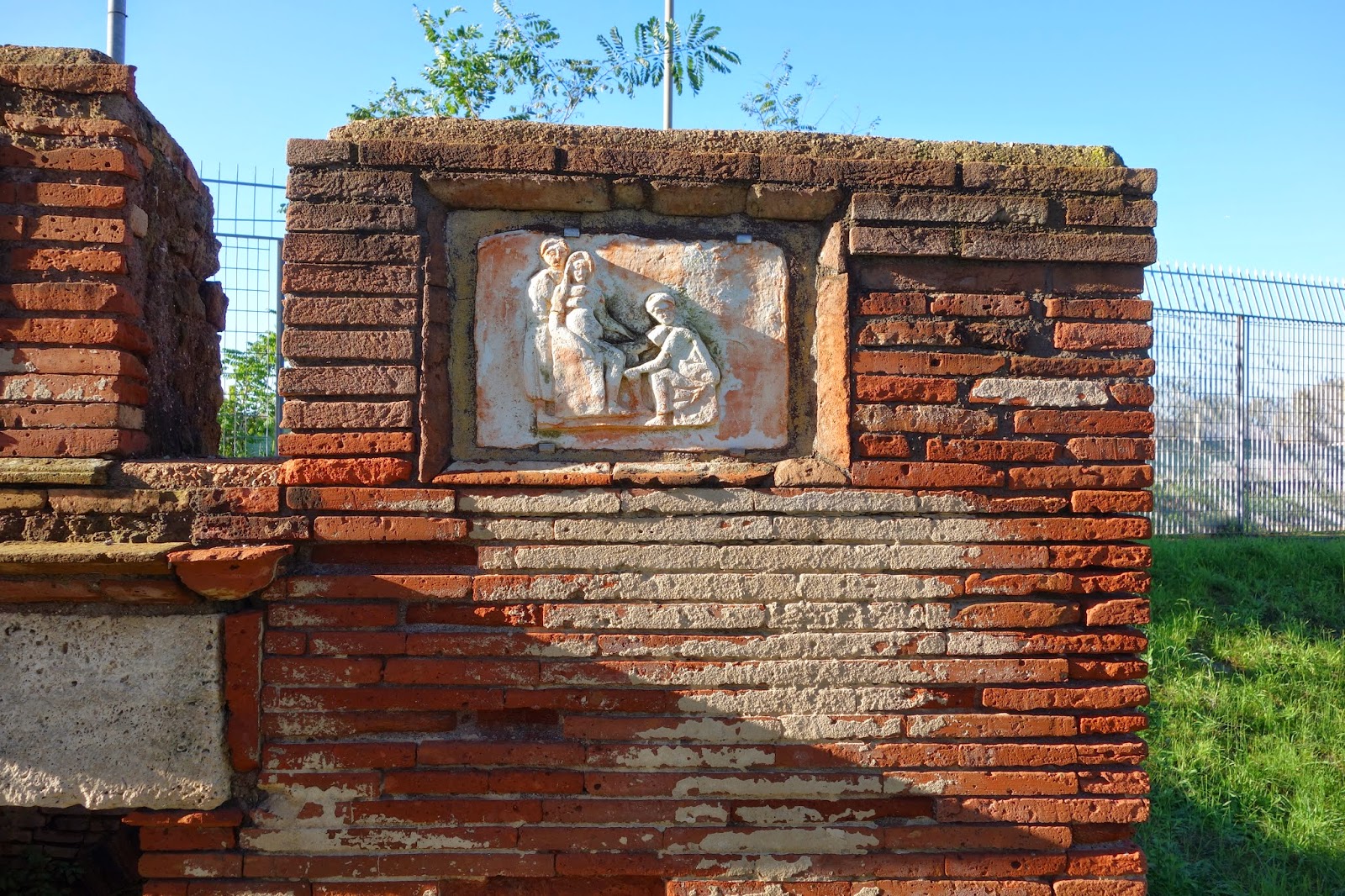 If you want to visit you can check out www.archeoroma.beniculturali.it. I would suggest actually calling them.