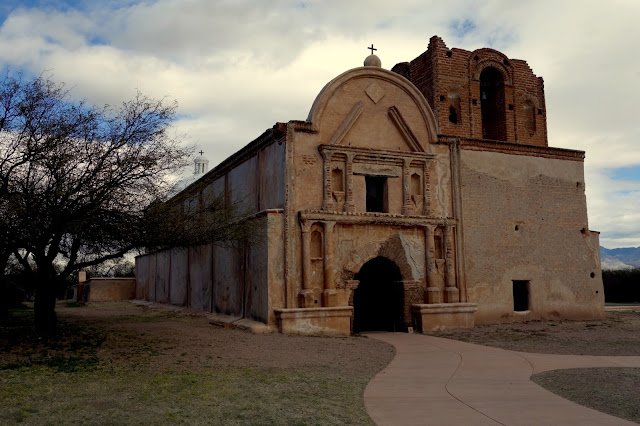 Time hasn’t been kind to the Mission of Tumacacori that stands in partial ruin three miles south of the flourishing artist’s town of Tubac in southern Arizona. Dreary weather added to the melancholy atmosphere surrounding the abandoned church when my husband and I visited. Although it is part of a National Historic Monument managed by the Park Service, other than a group of hikers who briefly stopped to use the facilities before they headed out on a birdwatching expedition, the grounds were empty of visitors.

Glenn and I wandered around the dispiriting buildings, feeling the passage of time bending our shoulders downward as we looked at what weathering, looting and vandalism can do. Half or more of the bell tower has fallen; the entrance and nave have lost their statues, plaster, and paint to expose the bare bricks as if construction had only begun. A few lonely gravestone remain outside the mortuary chapel. 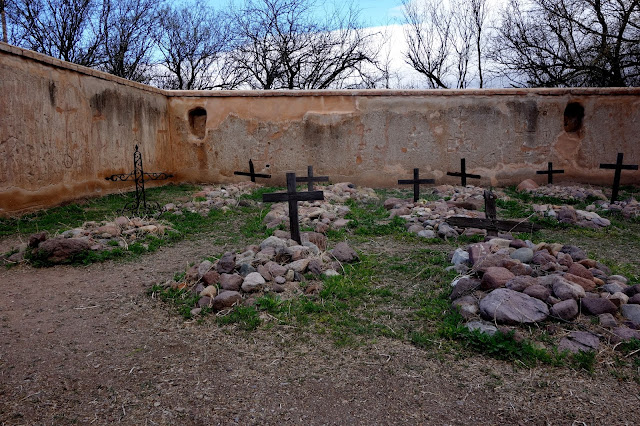 Only the newly painted white dome of the church gives a beacon of hope. Although restoration work is on-going and a small museum is available, it seems fitting that the ruins remain a monument to the fraught history of the area. The past remains part of the present with border wars now involving refugees, economic migrants, and drug runners. Phillip Caputo’s novel, Crossers, brilliantly depicts the area and its fraught recent history.
.
The Jesuit missionary, Padre Kino, arrived in the area in January 1691, and established a mission to convert the local tribes living in the vast land the Spanish called “pima,” a word that meant “nothing.” What is now the Sonoran desert of Southern Arizona and Northwestern Mexico was christened Pimeria Alta. The padres found Tumacacori and the surrounding area populated by the O’odhams, peaceful farmers who grew corn, beans, squash, and long-staple cotton that we now call Supima. 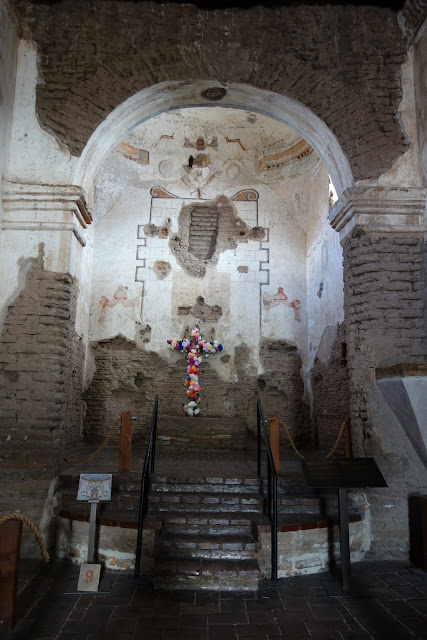 At first all went well as the Jesuits distributed cattle, tools, and seeds along with their teachings and baptisms. But like everywhere else, the Eden wasn’t to last when Spanish ranchers and miners moved in and enslaved the local population. Apache raiders, pushed out of their own lands by Comanches, began their depredations. Contagious diseases swept the missionary compounds, revolts broke out, churches burned. The time of the Jesuits came to an end in 1767 when King Charles III of Spain suppressed the order, favoring the Franciscans instead. The remaining Jesuit priests of the Pimeria Alta were led in a death march to Vera Cruz, the survivors transported to Spain. Legends of lost mines and buried treasure were born. The old movie, “Treasure of the Sierra Madre,” came to my mind. 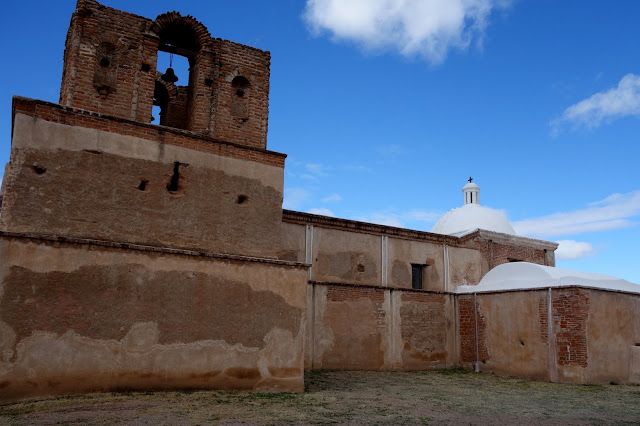 The Spanish made treaties with some tribes and captured many of the Apaches, who were shipped in chains to the Caribbean plantations or to reservations. It was 1801 and an auspicious time to rebuild the small church into something fitting for the importance of the mission. But the Mexican wars for independence and a decree by the new government forced all Spanish-born residents out of the country. The mission and the partially-built church was abandoned. A few native people held on as the Apaches began to attack again. Finally, they packed the holy statues, chalices and vestments and headed north bent with their burden baskets to San Xavier del Bac, never to return. The ruination began.
*** 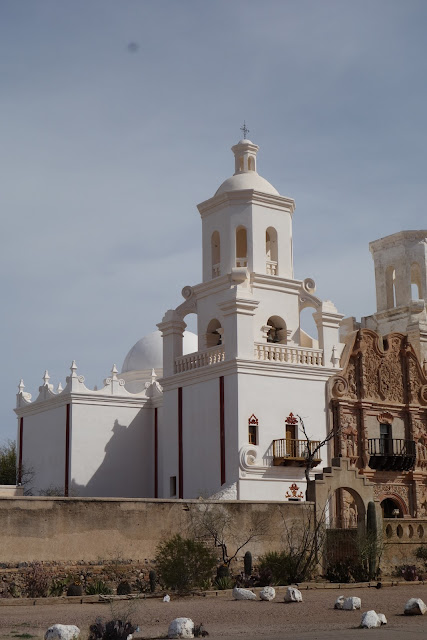 Our view of the state of the universe changed dramatically the following day when we visited San Xavier del Bac, a white-washed glory standing proud in the brilliant morning sun. The good padre, Kino, first arrived in the settlement of Bac in 1692 and returned to the site, now not far from Tucson, in 1700 to found a mission. He was interested in saving souls and also curious about the blue shells the local tribes traded. They were abalone shells and came from California, proving that California wasn’t an island and could be reached by an overland route. The door to further Spanish expansion was opened leading to construction of the beautiful string of missions on El Camino Real.
Work began in 1783 on the Mexican Baroque wonder that stands today. Against the odds, with the continuing turmoil of Apache raids, the Gadsden Purchase in 1854 when the area became the Territory of Arizona, Indian Agency interference, an earthquake, and the inevitable depredations of time and weather, the church miraculously survived and thrived. 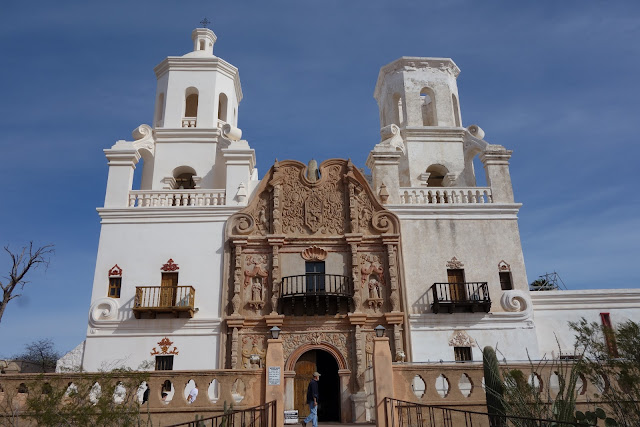 We joined a few tourists and worshippers to enter the church. Colorful frescoes, baroque carvings that look like draperies, painted wooden statues, gold leaf, pillars and niches, fill the nave, side chapels and high altar, dome and choir loft. 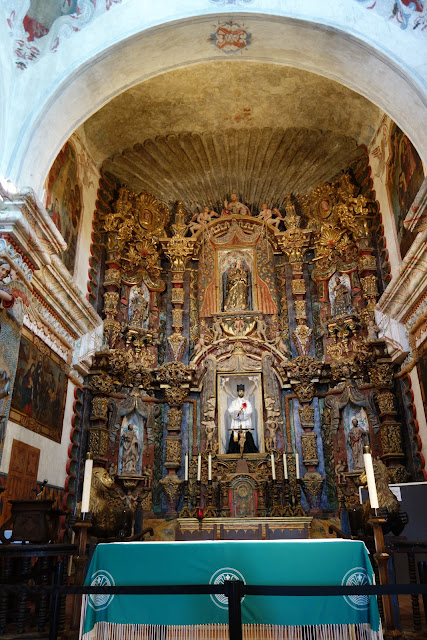 Human-sized angels guard the pillars where the transept supports the dome, painted angels adorn the space where columns meet the dome. 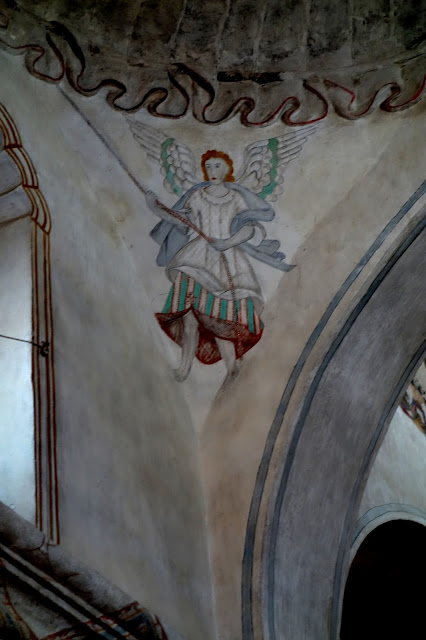 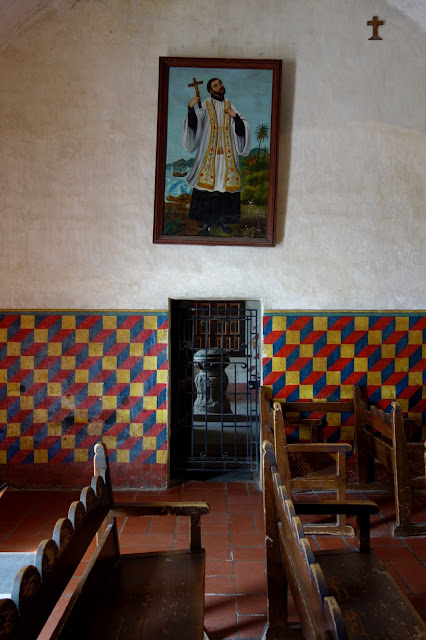 The theatrics were a contrast to a few quiet worshippers: a man in white, his cowboy hat hung on the post by the pew; a women bent in prayer, her long braid of jet-black hair hanging down her back, along with others who reverently gazed at the blanket covering the effigy of San Xavier with its pinned photos, hospital wrist bands and milagros placed by pilgrims as prayers for intercession for themselves or loved ones. 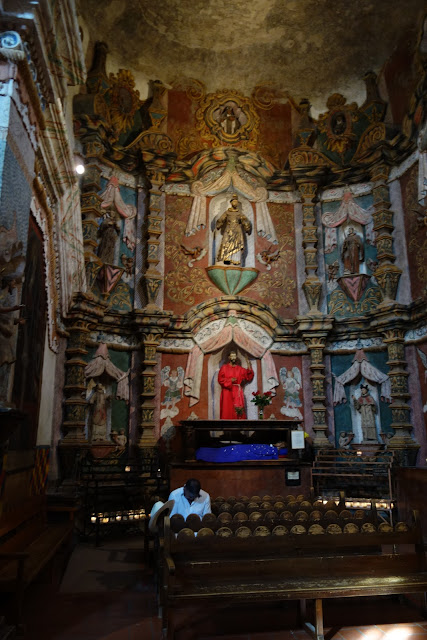 We sat at the back of the church for many minutes in contemplation. When it was time to move on I lit a candle for the men and women who labored to build this monument to faith, survival, and continuity. 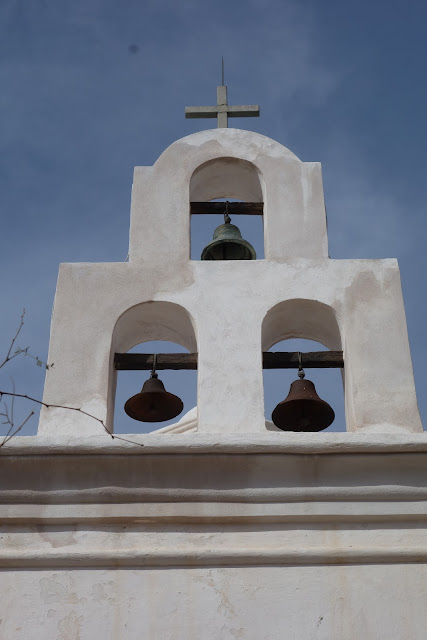 ARIZONA – Excursion to Tumacacori and Tubac

Bisbee – From Mining to Tourism