By
judithworks
on
“Cigni, cigni…cigni,”  “Swans, swans, swans,” the little boy cried out as he carried his pail holding yesterday’s bread to feed them and their cygnets gliding around the mill pond’s still waters leaving small wakes trailing behind. We were staying at a hotel converted from a 15th century water mill built on a little island and over a small river, the Clitunno.  The hotel was the scene of a wedding reception, with guests dining and dancing in the garden by candlelight until daybreak finally sent them home. We looked down at the scene from our window above the garden and pond while hoping the newlyweds’ life would continue to be as idyllic as it was that evening. 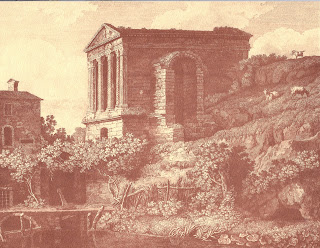 Floodlit and reflected in the mill pond, a small temple rests among cypress trees on a hill above a short stretch of ancient and worn stones of the Via Flaminia. This golden-hued stone building is the lovely Tempietto di Clitunno. It would look at home anywhere in the ancient Roman world with its porch  fronted by four columns, two carved in a spiral design and two with  fish scales. A pilaster on each end completes the entrance. They all have the beautiful acanthus leaf Corinthian capitals supporting the classic entablature and pediment. But instead of sculpted Roman gods, the pediment has a cross, grapevines and flowers with a Latin inscription, “Holy God of the Angels who Made the Resurrection” on the architrave. Faint shadows of frescoes depicting Christ and Saints Peter and Paul still decorate the interior. Like many ancient buildings the argument as to the temple’s origin goes on. One school decided that it is a true Roman temple turned into a church in the third or fourth century, another dated it to the eighth century positing that it was made from remnants of the classical temples surrounding the nearby lake, the Fonte di Clitunno. 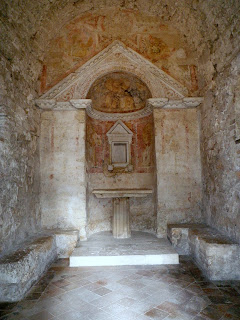 Whatever its origins, we were as enchanted with the temple as so many others have been. Andrea Palladio, the great Renaissance architect, as well as the French classical painters Poussin and Lorrain were also enamored and Lord Byron waxed lyrical when he visited in 1816.  In Childe Harold’s Pilgrimage he tells us: “And on thy happy shore a Temple still / Of small and delicate proportion, keeps…”

The setting, so redolent of the past, always made me mindful of the continuity that so characterizes Italy and how I was part of that endless procession, pagan and Christian, rich and poor, native and foreign, who all shared in its eternal beauty. The temple remains my most beloved Italian place – a site where I could become one with those who came before.
The mill pond is fed by the river Clitunno coming from the nearby Fonte, a lake famous in antiquity. In Roman times the sacred lake’s clear waters were used to bathe white cattle before they were sacrificed to the gods. Caligula consulted a nearby oracle. I wondered if the mad emperor posed a question before he made his horse a senator – and what advice the seer might have offered. Pliny the Younger, in his letters written about AD 108, described hills covered with cypress and the lake itself surrounded by ash and poplar trees with cold water so clear that one could count coins tossed in for luck. Earthquakes changed the landscape in AD 446 and the sacred site was abandoned to time.
While the Tempietto is not much visited, the lake is now surrounded by a dusty parking lot instead of temples. Tour buses by the dozens disgorge their passengers who sit under the surrounding poplar trees enjoying their picnics and buying souvenirs, the past out of mind.

Excerpt from Coins in the Fountain