By
judithworks
on
“Should we?” I said to my daughter.
And of course she answered, “We should.”
Our husbands rolled their eyes – they’re off again they commiserated.
Spring can be pretty dull in Seattle and we needed some sun (and of course good food, wine and shopping). I hadn’t been in Italy since October – too long for me. But I also had a reason to visit Rome other than just enjoying la dolce vita. I’m working on a novel set in Rome and wanted to check out some of the settings to ensure I hadn’t misremembered. (It’s about a couple of expatriates who find that their new life has more complexities than they anticipated.)
Our travel agent soon came up with the arrangement: Seattle – Amsterdam – Rome on Delta for a good price. The flight was uneventful except for breakfast. Being in the back of the bus we didn’t have to worry about gourmet food. Instead we were served a long fat piece of dough filled with an unidentifiable substance. When I asked the cabin attendant what it was she said, “I don’t know – we all have been asking headquarters but they won’t tell us.” I decided not to finish it. 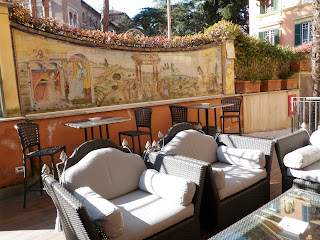 It was hot and sunny when we landed, a perfect beginning. I had booked my favorite hotel, The San Anselmo on the Aventine Hill. The hotel was peaceful and relaxing as usual with outdoor spots to while away the time in the day and a cozy bar for after dinner in the evenings. But we were on the march. The first stop was the Testaccio Market nearby to buy some fruit to snack on and of course to look around – we headed for the shoes and handbags first. It  always intrigues me that shoes take up a good part of the market. What are they doing next to the artichokes? The answer: they’re both equally important. Just look at the styles of sandals on all the ancient statues – style goes along with food in Italy and always has. 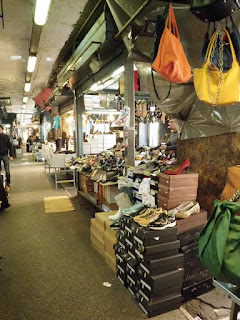 After we finished with the important part of the market we browsed the food. One intriguing stall had a large picture of Padre Pio watching over the tempting treats from the south. We bought packages of pasta made with funghi porcini to take home. 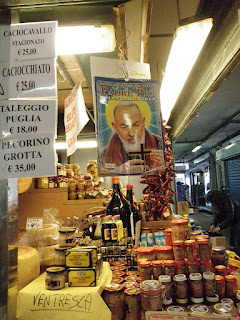 Next stop: Volpetti for some bread, cheese and a few slices of salami. We didn’t want to starve between meals and, even if we weren’t hungry, it was an obligatory visit to gaze as the delights of the wonderful deli – the best in Rome.
I had prepared a list of places to see – needed to experience the ambience again and take photos to get the descriptions right for the book’s scenes. The first stop was the Basilica of San Giovanni (the Lateran) to be followed by its more down-to-earth neighbor, the market in Via Sannio. The church was empty at the early hour, long before the tour guides would bring their flocks to see its artistic wonders or to participate in a service. With the absence of crowds it was a special pleasure to linger in the cloister with its lapidary: sarcophagi, reliefs and inscriptions from ancient and medieval times lining the interior walls, and the twisting double pillars encrusted with tiny glass squares framing the garden. 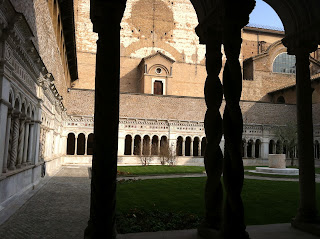 But the Via Sannio market, only a block away through the ancient Aurelian walls, was in full roar, no time for peaceful contemplation, no time for the past. We plunged in to finger the cashmere sweaters, try on the shoes and take photos. Then it was time for late lunch: fabulous Cacio e Pepe at Taverna Cestia with a friend who was on her way to the airport for a visit in Australia. 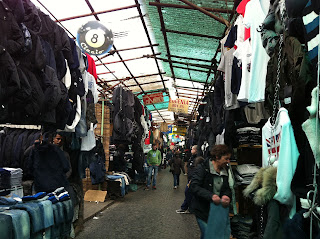 Another day was spent at the Villa Borghese with its sculptures and paintings. I took the time to  look closely at the interior decoration, especially the beautiful ceiling frescoes with their birds, foliage, and gods and goddesses. The paintings and sculptures were as marvelous as ever but this visit was especially interesting because interspersed with the regular wonders were some of the sculptures that had been “sold” to Napoleone in 1808. The pieces were on loan from the Louvre whose management apparently didn’t offer to return their spoils of war to their rightful place on a permanent basis. 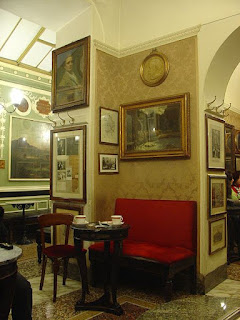 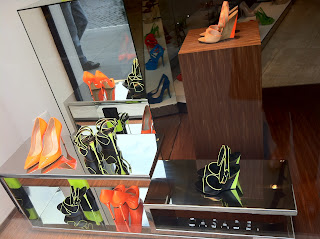 Shopping? Of course there was shopping. Besides the cheap kind in Via Sannio there was the window gazing type on the Via Condotti and the pleasant variety on Viale Europa in EUR, my old stamping grounds. Before leaving the Condotti it was time for a pick-me-up: Oh well, what’s $45 for two glasses of prosecco and a shared cake at Café Greco? The atmosphere at the coffee house, founded in 1760, is worth it once in a while.

And on we went, only taking one day off to visit the Renaissance Villa Farnese in Caprarola. The enormous Villa is filled with frescos exalting the family and the gardens are a delight filled with statuary and ancient cypresses. Our driver, whom my husband and I had met the previous October, is from the Seychelles and he brought a friend along, a delightful Japanese woman working for the United Nations. This insured lively conversation, especially during our lunch break at a small trattoria with its homemade pasta and grilled meats. 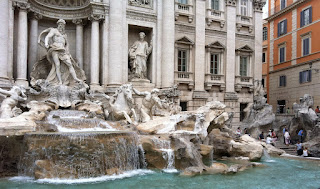 Unfortunately 4:30 AM on the last morning arrived. It was time to leave for the airport. But I wasn’t worried: I had tossed a coin in the Trevi fountain the day before to ensure a return.