By
judithworks
on
We arrived in Sicily deep in the bowels of the large ferry that transports the train from the mainland to the island. Now we returned for a day of sightseeing, this time on one of the many car ferries that cross the straits from Messina back to the port near Reggio Calabria. 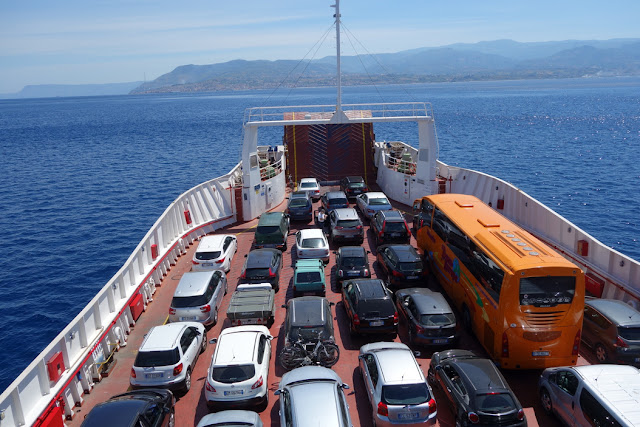 The straits, so feared by the ancients, are only two miles wide at this point but are still full of hazards: cargo and cruise ships moving at high speed day and night, along with strong tides as the waters flow back and forth between the Ionian and Tyrrhenian Seas. But we didn’t see any terrified ancient Greeks or Romans rowing frantically while on the lookout for Scylla, the mythical monster, a rock shoal on the mainland side, or Charybdis, a terrifying whirlpool off the Sicilian coast. Both these monsters were said to be women; Scylla had 12 arms and 6 heads on long snaky necks; Charybdis belched water three times in an out. Homer says Odysseus decided to steer closer to Scylla and lose a few sailors rather than chance going near the whirlpool and risk losing the whole ship.
The memories of the ancients live on: Our first stop after disembarking was the small town of Scilla, Now topped by Castle Ruffo, the fearful rock named Scylla still looms over the little seaside town. But as in Sicily, none of the women looked at all like the myths and I wondered why the ancients determined they were women. 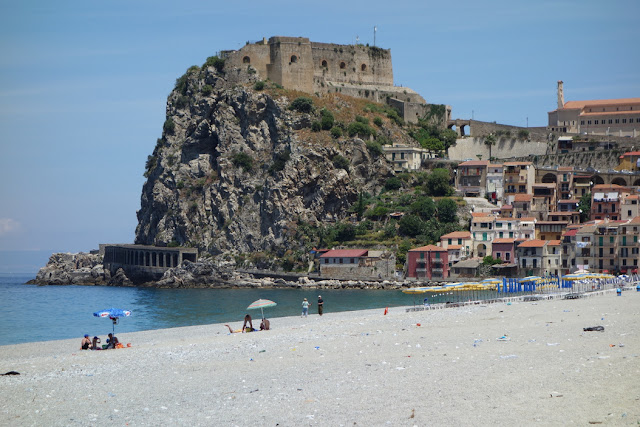 No one we saw looked terrified either. In fact, the town was quiet and nearly empty with only a couple of restaurants and bars open and a few sunbathers trying out the early summer sun. 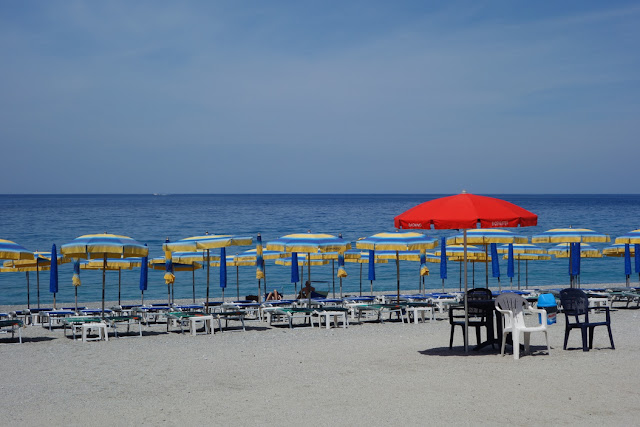 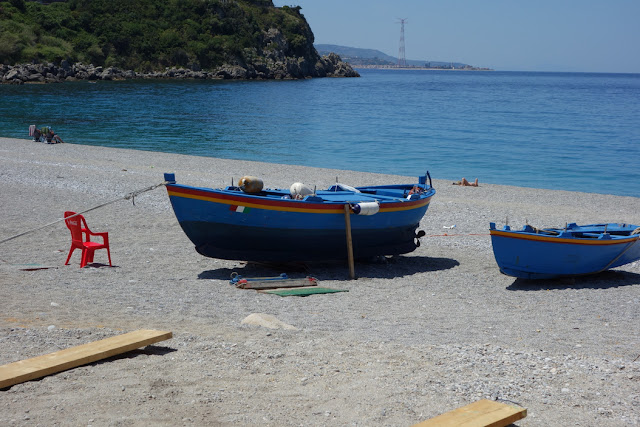 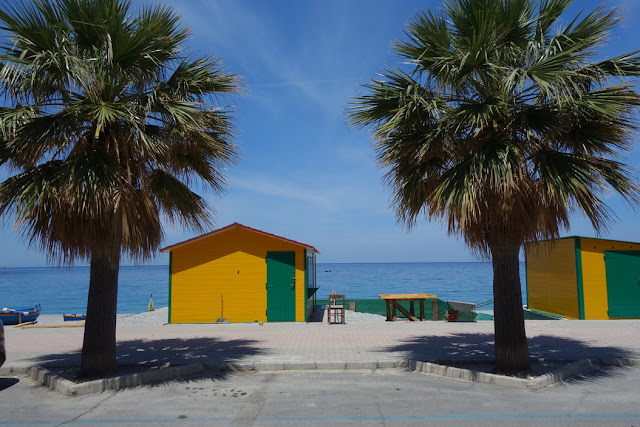 We watched several workers painting and scraping to get everything cleaned up for the coming high season. Others set up two cabins, one with a truly bizarre logo on the side: a man trying to look over a barrier to watch women changing their clothes. Not very inviting to me. 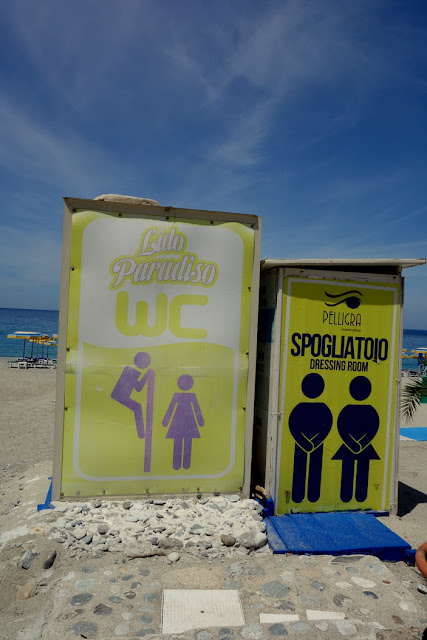 The only other sign of life beyond the few workers and the restaurant and bar next door where we had lunch and coffee was a sword fishing boat, the lookout swaying back and forth high atop the mast. No a job for those prone to seasickness. 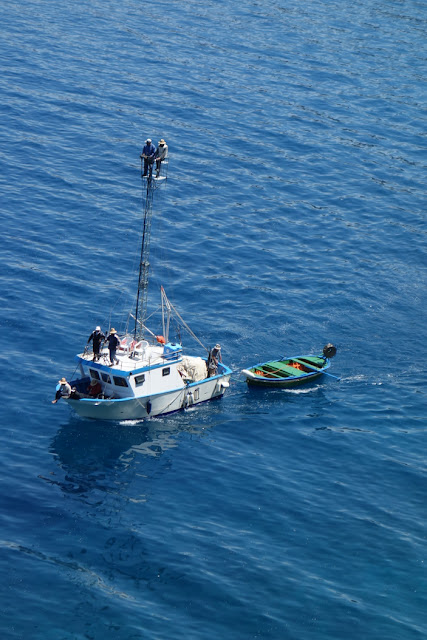 The meal was excellent but there was no point in lingering after we enjoyed an iced coffee while looking far out to sea where the distant shapes of the Aeolian Islands shimmered in the haze.

Our goal for the afternoon was the famous Riace Bronzes now in a museum in Reggio di Calabria, at the end of Italy’s boot. The unfinished museum is still nearly empty after years of construction. All we saw besides the bronzes was a small gift shop, and a large hall with three sculptures at the far end. 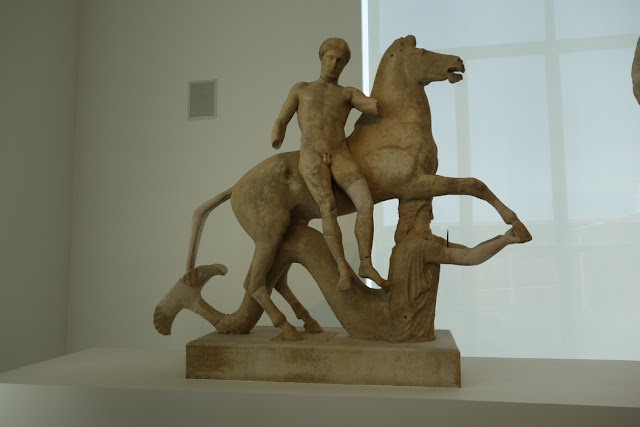 A separate climate-controlled room houses the two bronzes plus three bronze heads all set on high-tech earthquake proof pedestals. Tourists are let in in groups of about twenty after a wait in a decontamination room designed to clean the air. We waited our turn behind a group of giggling grade schoolers in their matching outfits. 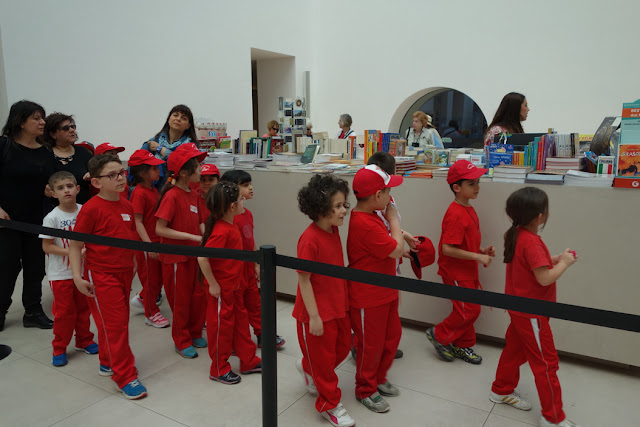 The museum, empty though it is, was more than worth the journey. The two Greek bronzes were found by chance in 1972 when a snorkeler noticed an arm sticking out of the sand. Not some poor drowned soul but a statue. The second one turned up nearby. They are an astounding example of workmanship. Most likely cast around 450 BC, the larger than life-size figures probably represent two warriors, one a young hero or god conscious of his own beauty and power, and an older more mature hero with a relaxed pose.

The eyes are calcite, their teeth silver, lips and nipples are copper. It is unknown exactly where they came from. One theory holds that they were plunder when the Romans occupied Greece and then were lost in a shipwreck on the way to some emperor’s villa or palace,  although no ship remains have yet been found. Wherever they came from they are worth a visit to southern Italy and a stunning reminder of the skills of the ancient Greeks who didn’t need computer programs to produce masterpieces unequaled until the Renaissance. 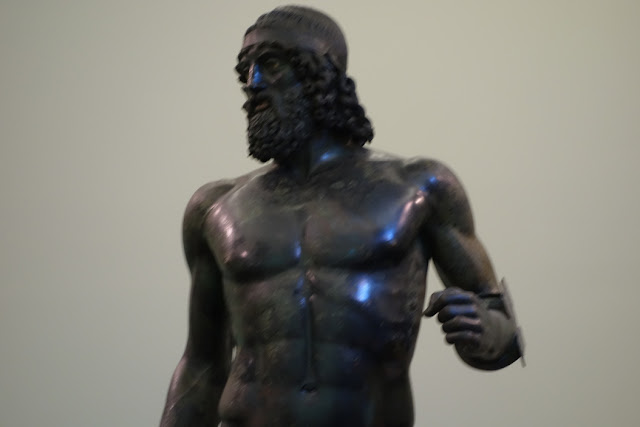 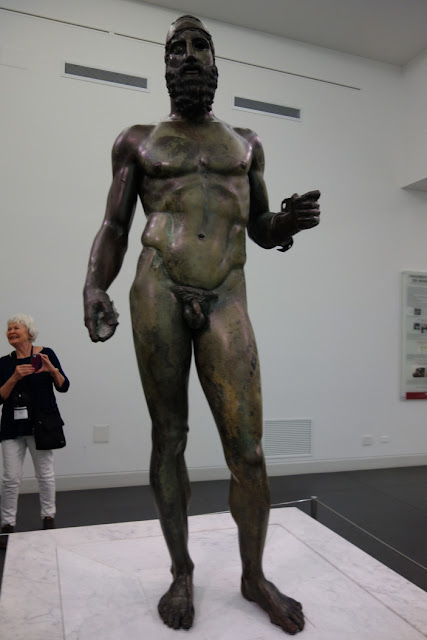 Back on Sicily, our day of marvels was completed with Mt. Etna spilling fire while we dined at a small seaside restaurant. Nature and man combined to produce an unforgettable experience. 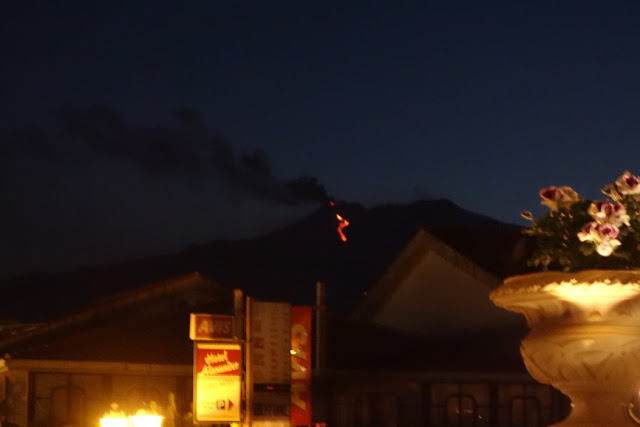