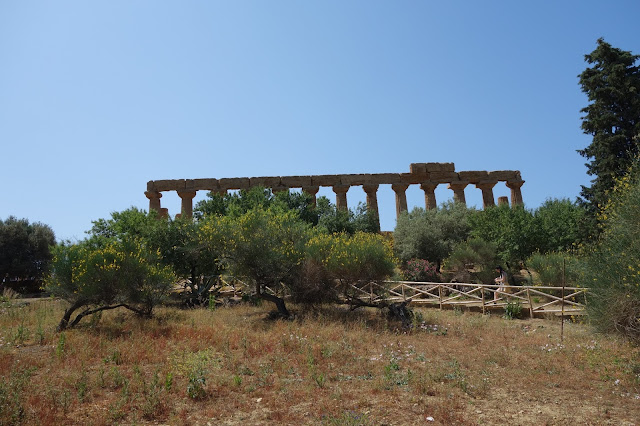 The other day I read that the almond trees in Agrigento were in blossom and my thoughts returned to the marvelous archeological zone near the city called the Valley of the Temples. The name always struck me as odd because the famous Greek temples are high on a ridge overlooking the sea a few miles away. But there are temples galore.
The almond blossoms had fallen by the end of May last year when we were there and the trees were laden with green almonds. 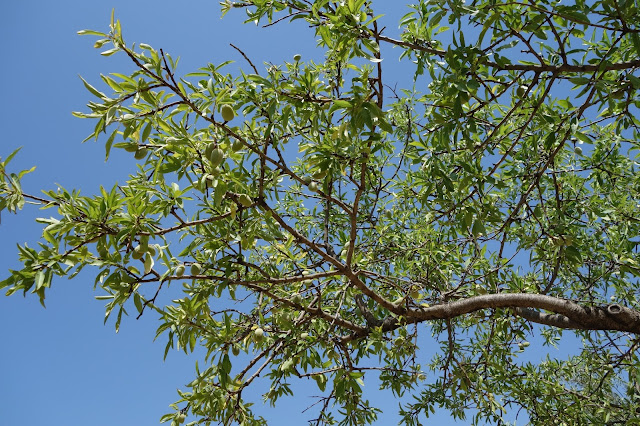 Ancient contorted olives trees add to the beauty of the scene. 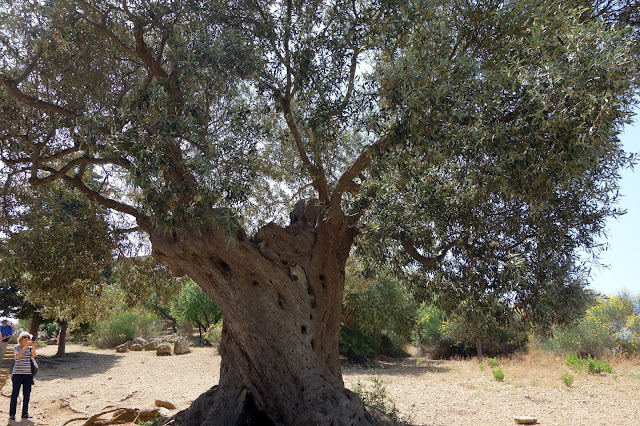 The area was settled by Greeks around 580 B.C. and followed the same pattern of conquest and culture as most locations in the area: Romans, Byzantines, Arabs, Normans and the rest. The Greek temple builders named it Akragas. The name changed over time until 1927 when Mussolini decided that it should be Agrigento.
We began our walk at the top of the hill on a hot day to traverse the Via Sacra which parallels the remains of the original city walls, honeycombed in places with the remains of Byzantine tombs. 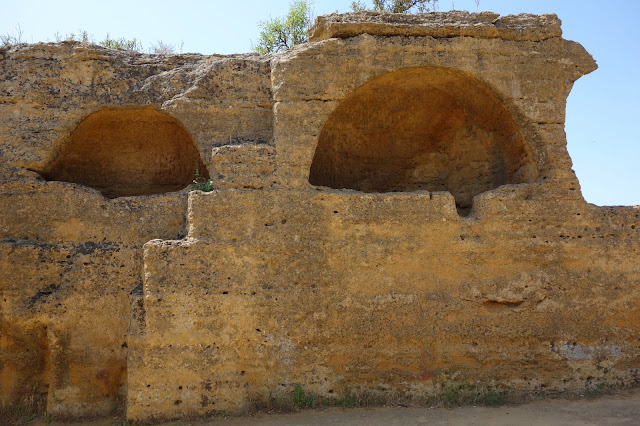 The first golden-hued temple is the Temple of Hera of which not much remains but lonely pillars reaching toward the sun. 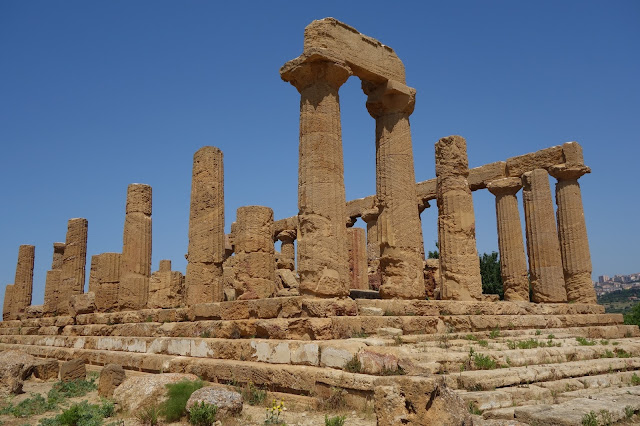 Next is the magnificent Temple of Concord, the best preserved of all Greek temples outside of one in Athens. It was supposedly named Concord in honor of couples who came to worship on their wedding day to ensure a peaceful marriage. The temple owes its state of preservation to the oddly named 6th century bishop of Agrigento, Saint Gregory of the Turnips, and was only restored in the 18thcentury. I thought the tourists should be wearing Greek-style clothing like those on painted vases to complete the picture. 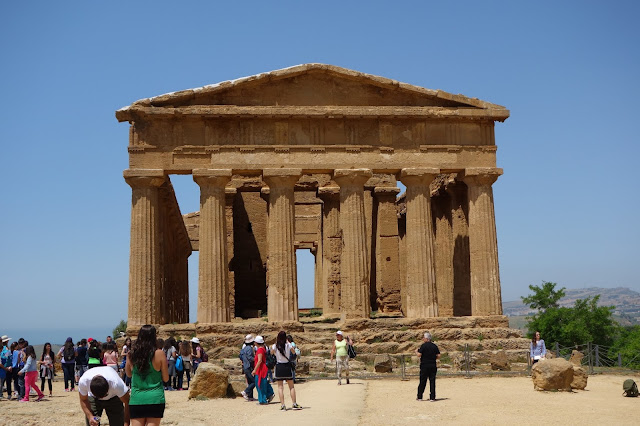 Nearby, a bronze statue of Icarus by Igor Mitoraj lies on the ground as if he had just tumbled from the sky when the sun melted the wax that held his wings together. Beware of flying too close to the sun as his father, Daedalus, the legendary founder of Akragas, warned. The statue seems a perfect foil to the temples, stripped bare of their ornamentation but still standing defiant after 2500 years while the heedless Icarus died. What buildings of our day will last that long or will some of ours fall to earth for failure to heed warnings? 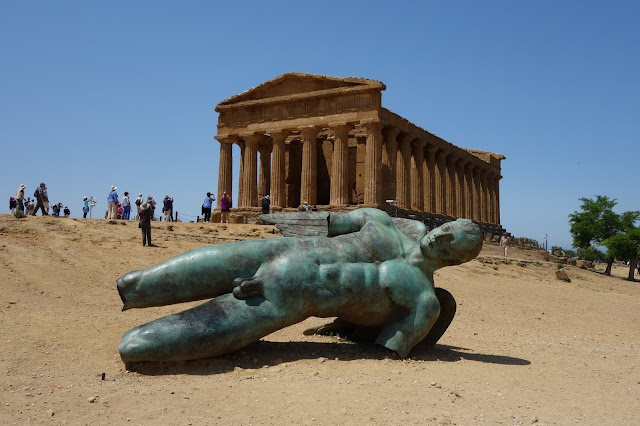 The nearby Villa Aurea has a memorial to a Captain Alexander Hardcastle in the courtyard. He showed up in 1921 to provided money for excavations in the area and restored the villa as his home. He lived there with his brother until he went broke and died in an insane asylum. The villa is now used for exhibitions but I dreamed of living there in the midst of all this beauty. 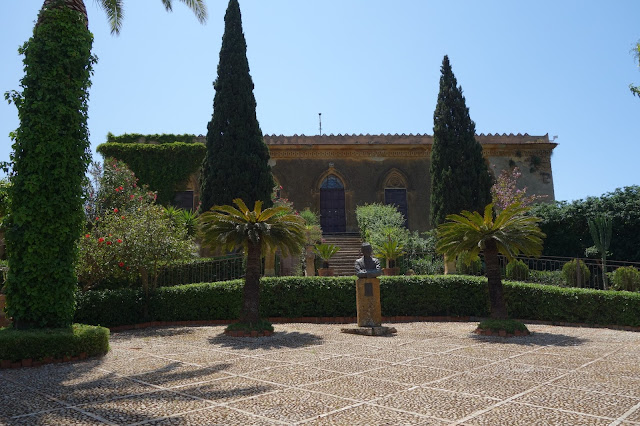 The Temple of Herakles is a heap of enormous building blocks, and following that is the remains of the Temple of Olympian Zeus, once the largest Doric-style temple in the Greek world. Not much is left but a few columns and a gigantic statue (telemone), one of many that once stood along the sides of  the building. All but this one and one in the museum, now swept away by time and history. 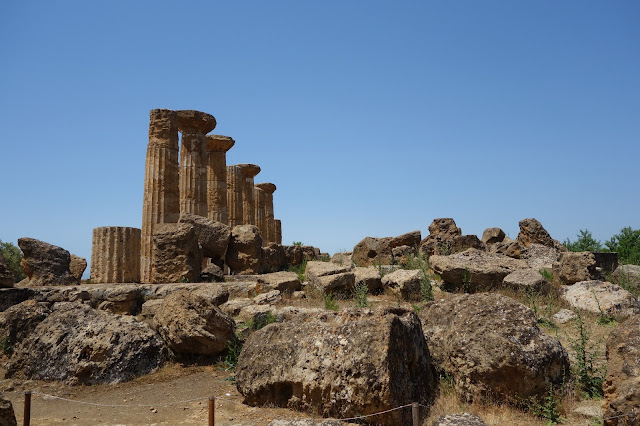 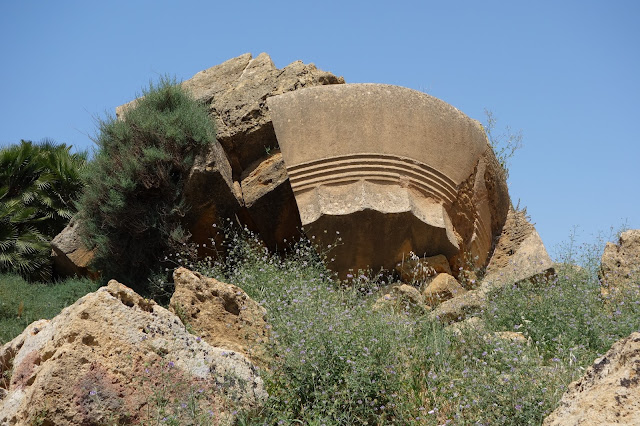 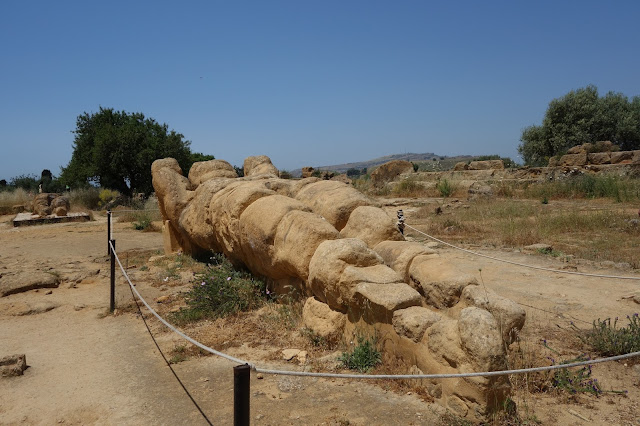 As we left the Via Sacra portions of a temple called Castor and Pollux shimmered in the sun. The only guard was a sleeping dog. 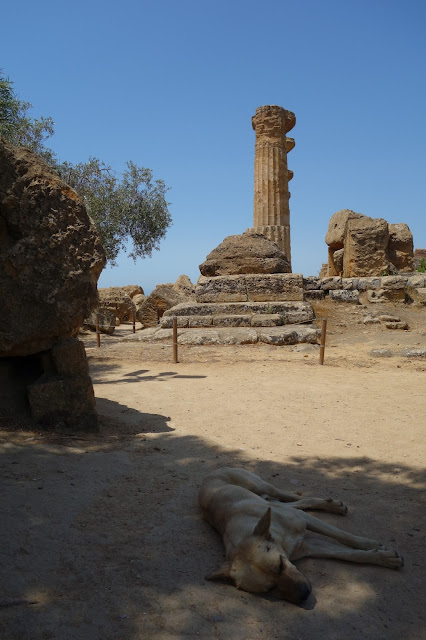 The “temple” was in fact erected in 1836 from leftovers, and despite its unauthentic provenance, it is the perfect vision of the romanticism of the Classical world. and the symbol of the city. 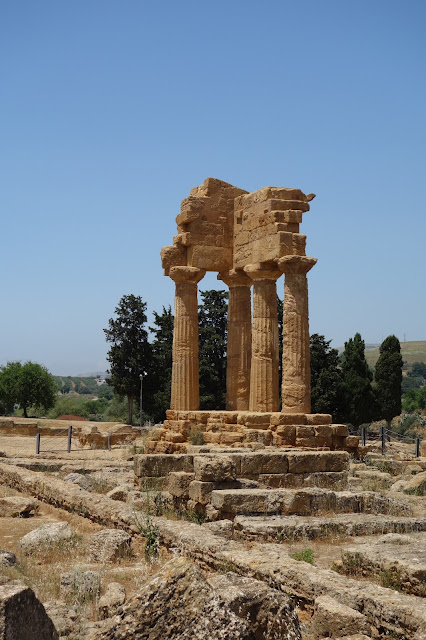 The wonderful archeological museum contains the finds from the temples along with finely painted Greek vases, statuary and marvels from the Romans and Byzantines who all had their day in the sun but ultimately fell to earth. 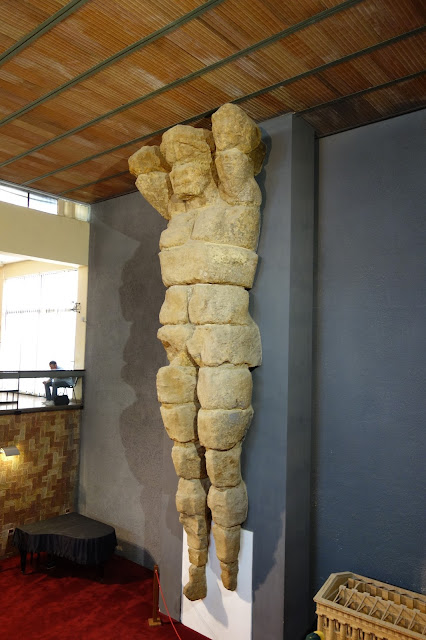 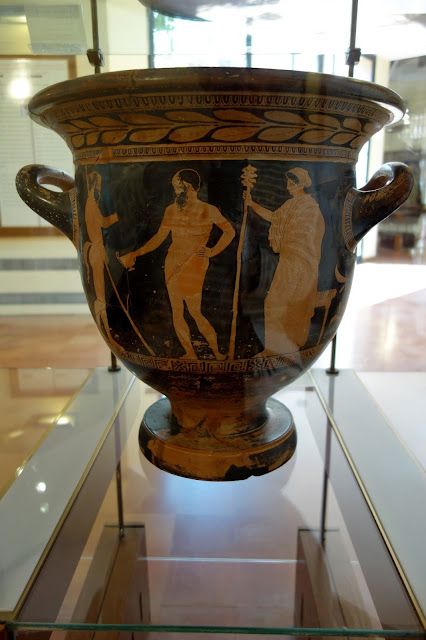 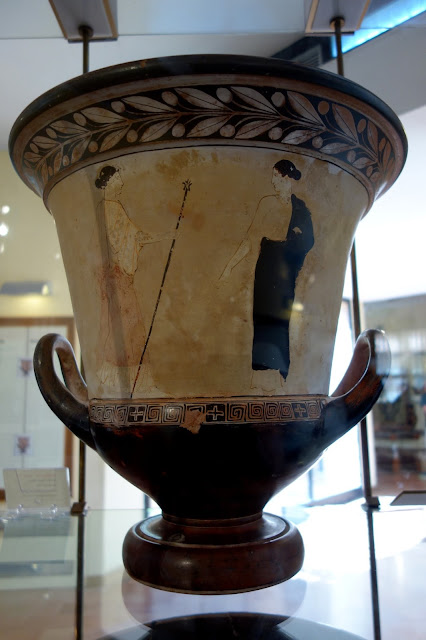