By
judithworks
on
We returned from our travels to Sicily, not with salt of the earth but salt from the sea. But we began the visit to the far western part of the island in the, tiny walled town of Erice 2500 feet above the salty sea. The town was founded by about 1200 BC but developed by the Carthaginians around the 6th Century BC. After which its history followed that of the rest of Sicily with one culture after another taking over. Now it’s nearly deserted in the winter when snow falls, but filled during the warmer months with tourists, mainly those from elsewhere on the island who come in the summer to escape the heat. 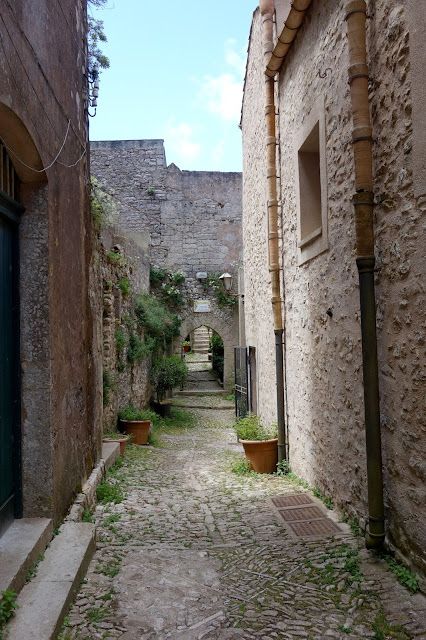 Long ago, it was known all over the Mediterranean for its temple dedicated to the goddess of fertility known as Astarte, Aphrodite, or Venus to the Romans who supported it with taxes. The cult was bound with sacred prostitutes who, as the story goes, began their “careers” at age 13 and retired at 21. They dined on milk and honey to become pleasingly plump and were much in demand as wives after they left the temple. 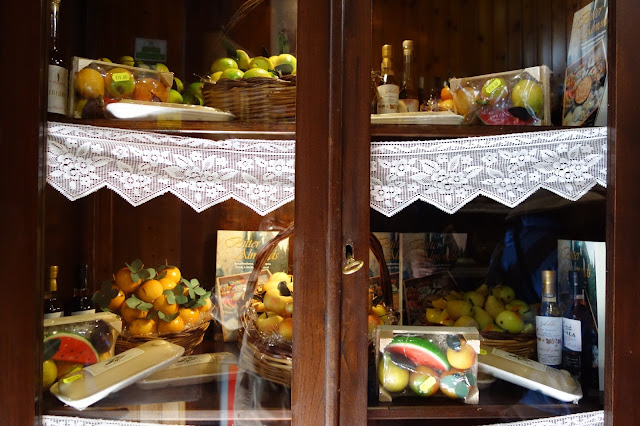 We didn’t eat any milk or honey nor was there anything much to see of the temple, but we made the modern obligatory and fattening stop at the justly famous Pasticceria di Grammatico Maria, who use the same recipes and ingredients as those of cloistered nuns in the 1400s. We didn’t resist the enticements like “sighs,” “beauty-ugly,” “mother- in-law’s tongue,” and the inevitable cannoli. All divine. I could visualize myself becoming pleasingly plump if we hung around too long. 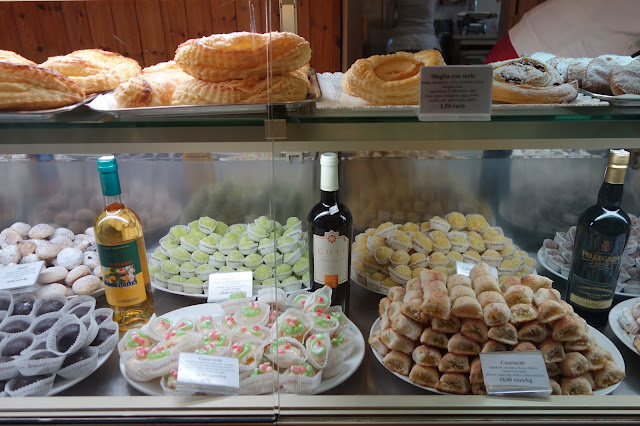 On a sugar high from the pastries and a couple shots of espresso, we headed down (way) down to the salt pans near Trapani,  The city was founded at the same time as Erice and served as its port in ancient times. 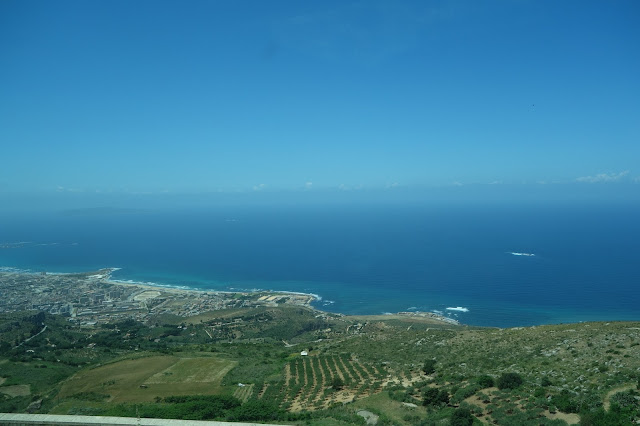 Beyond the city lie the salt pans near an area interestingly called Nubia. We wondered if the name was a coincidence or from Africans who settled in the area at some point. The area is now mostly a nature reserve with flamingos and herons, the salt trade having declined over the years. 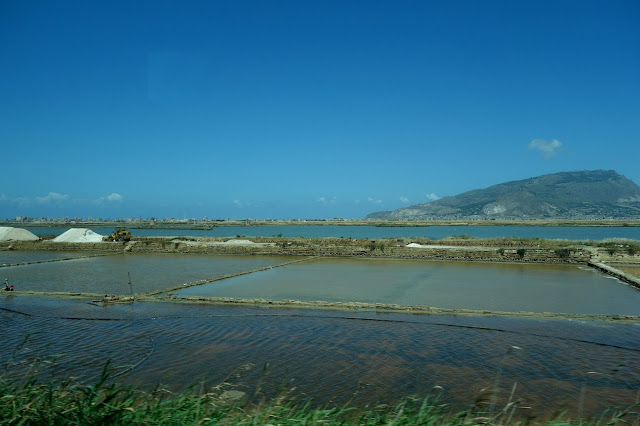 The ponds are filled with sea water in late winter, and the winds and sun slowly evaporate the water until the crystals become reddish from algae. When the algae dies the salt is at the correct salinity to be harvested. It’s then washed and raked into piles to drain before packaging. 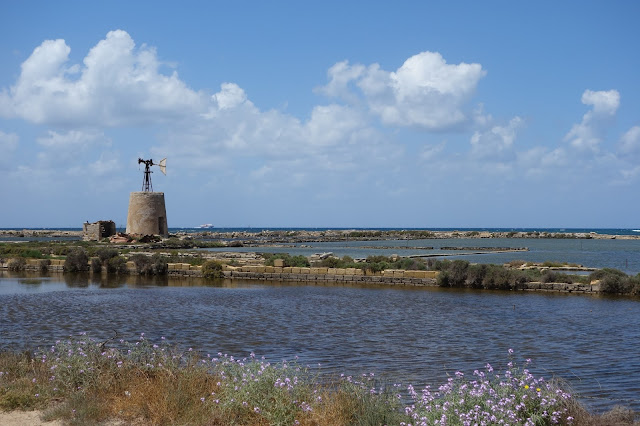 In the distance we could see an old watchtower, a relic of the days when the Saracens raided. 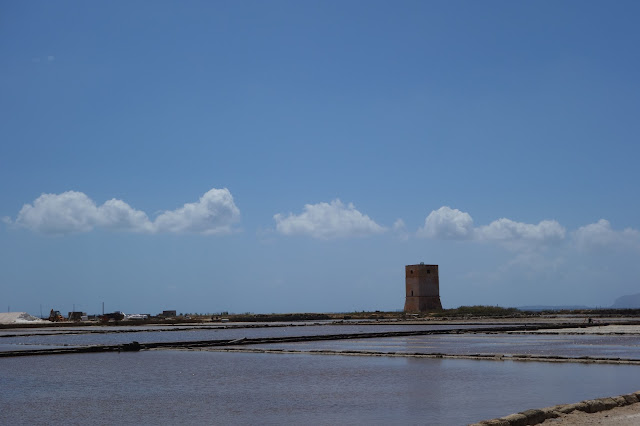 Despite the overdose of pastries we didn’t want to miss lunch, so we stopped at the Trattoria del Sale (sale is Italian for salt), a restaurant surrounded by the salt works. The food was good  but the museum associated with the restaurant was fascinating. 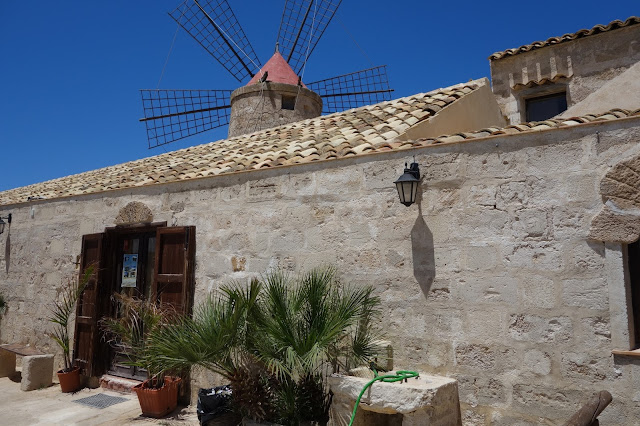 Windmills were built in medieval times to help pump the sea water, but judging by the museum the process must have been beyond backbreaking until recent times when machinery came into use. 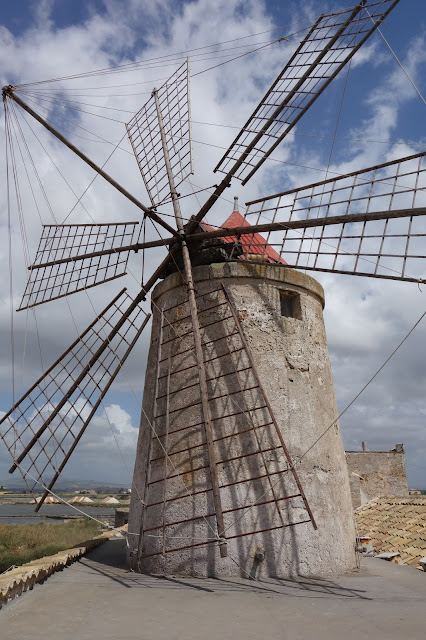 Between courses we looked at the salt-encrusted wood Archimedes screws to pump water, a frame for a windmill sail, and the rakes and wagons, and wondered how the workers survived such labor in the burning sun while here we were relaxing with food and wine without a care. 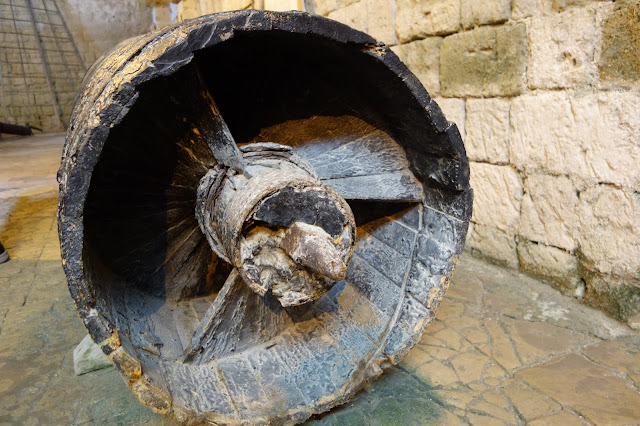 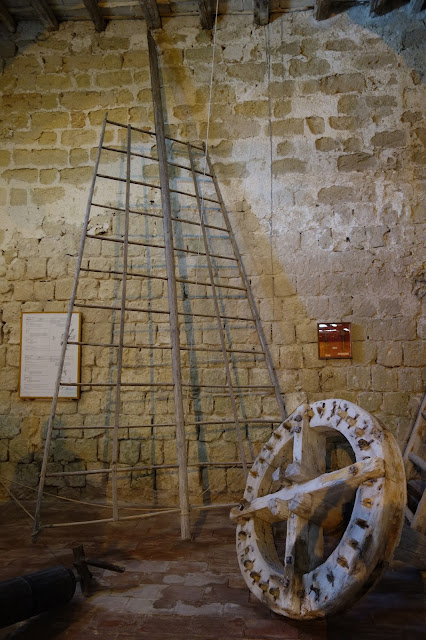 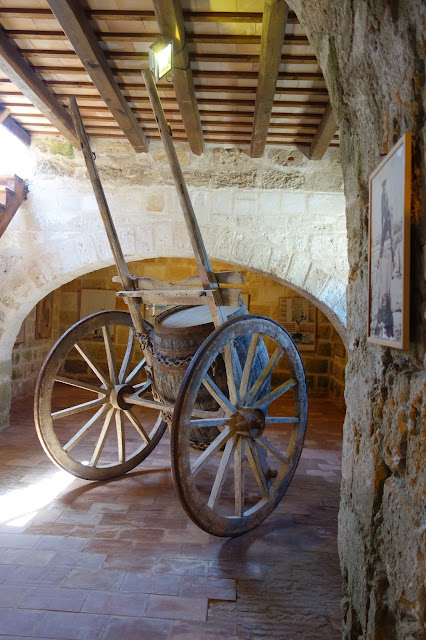 It’s strange that so many places of past misery are now tourist attractions where the traveler can take a quick look, contemplate for a few minutes, and then ponder the next meal. Especially in Italy. 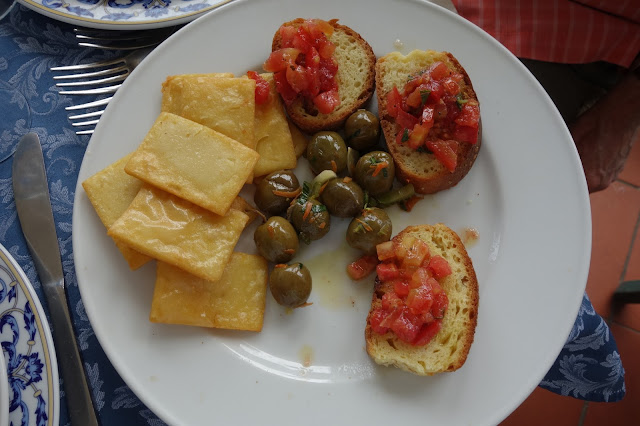