By
judithworks
on
What better than a few days in the Italian countryside? Especially if they involve a castle, a swimming pool and time to visit small hill towns nearby in the warm sunshine. 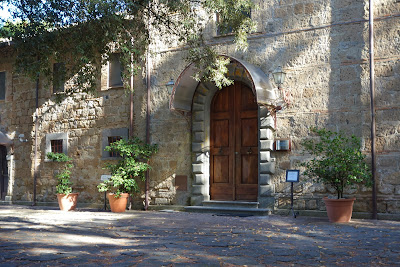 A writer friend in Italy recommended the Castello di Santa Maria, located near the tiny village of San Michele in Teverina, at the north end of Lazio, the region surrounding Rome. The castle is part of the Charme & Relax network of (mostly) country homes and castles.
We drove north from Rome, through Viterbo and on to a rural secondary road towards Orvieto, turning off at the sign to the village and our destination. Then up a cypress-lined drive to reach the castle – an 15th Century monastery founded by the Camaldolesi monks, and enlarged by the friars Servants of Mary in the 17thCentury. Now restored and converted to a hotel with several rooms in the main building, and cottages set in an olive grove or near the swimming pool. A slice of heaven, Italian style. 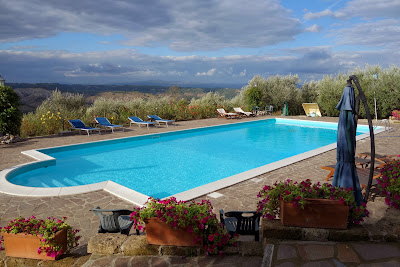 Our cottage had two bedrooms and baths separated by a living room, perfect for two couples, giving us both privacy and community. We overlooked the pool, olive trees and in the distance the isolated hill town of Cività di Bagnoregio perched on a outcrop in the middle of barren land.
We used our hotel as a springboard to visit surrounding towns. The first goal was to drive to Bagnoregio where the steps and bridge to the town begin. Cività is a medieval town precariously clinging to eroding rock, population 12 plus cats in winter but more in summer when tourists make the trek up and down steps and over a bridge to look around. The town was founded by the Etruscans like everyplace else in the area. Its claim to fame beside the spectacular location is that it was the boyhood home to Saint Bonaventure. Unfortunately, his home has long since fallen off the cliff into the abyss. One wonders when the rest will follow. 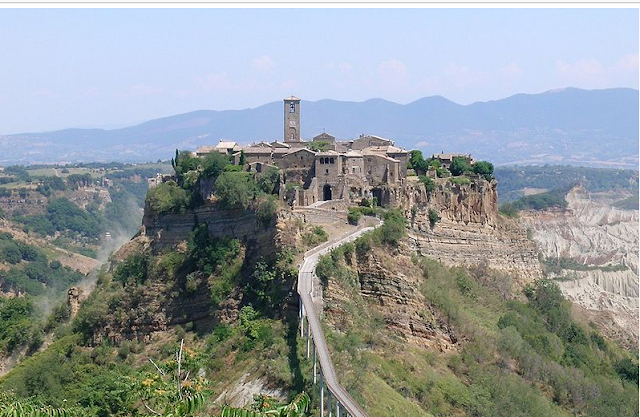 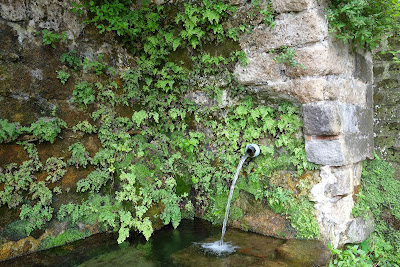 Civitella d’Agliano, where there is little to see, spills down a hill with narrow twisting streets and ancient dwellings. The street is so narrow it took fifteen minutes of to-and-fro to get out of a dead end. When the car was finally positioned to leave the town we were pointed steeply downhill on a road taking us to a fallow field with no way to make a turn back up to the main road. Down we went hoping for some way to return. At the bottom there was a treat: a medieval washhouse, the clear waters pouring out of a spout to bathe the ferns. No washer-women in sight – they were all standing on their tiny balconies or front steps above us watching with amusement as we tried to maneuver.
Orvieto, an actual city with medieval towers, is set high on a rock outcropping. The black and white striped Duomo with its marvelous mosaic and carved marble facade is the main attraction. 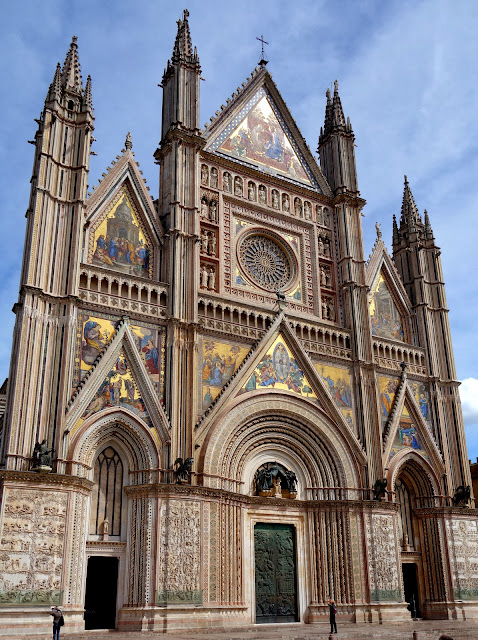 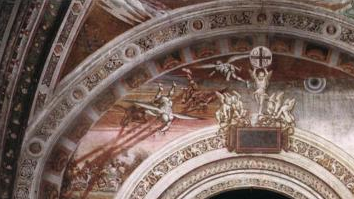 The treasure filled interior hosts the Chapel of San Brizio decorated by Renaissance masters. The frescoes by Luca Signorelli depicting the Preaching of the Antichrist, End of the World, Resurrection of the Flesh, and the Damned Taken to Hell are enough to scare viewers out of their wits (and to stop sinning). Most alarming was the Devil shooting death rays on an ill-fated town. The rays looked too much like missiles so common in our own age.

The Resurrection scene is almost three dimensional with bodies crawling out of holes. Signorelli seemed to have especially enjoyed painting the nicely-rounded posteriors of naked men in this remarkable scene where everyone, but a few skeletons, flaunts a perfectly toned body as if their time in Purgatory was merely a spa cure. 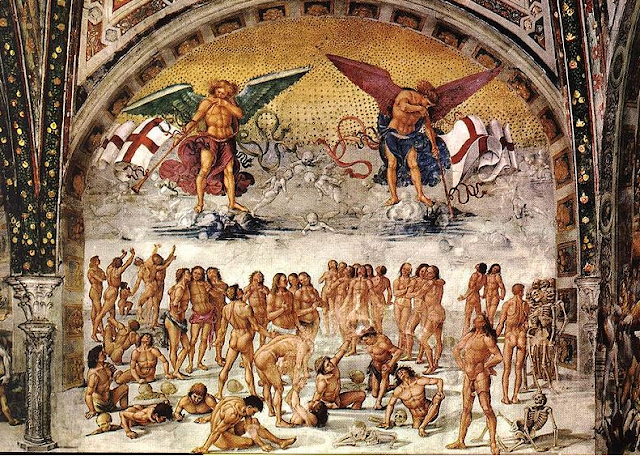 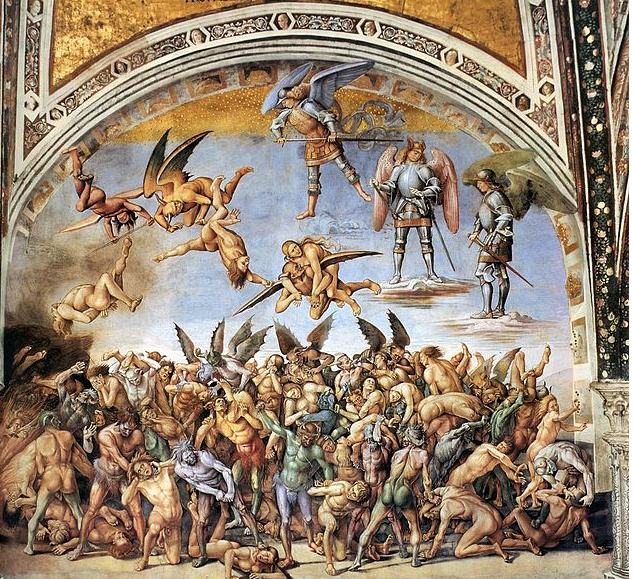 The Damned Taken to Hell has the famous winged devil carrying a naked woman to her fate. All that death and misery was soon too much to contemplate on a lovely day – it was lunch time. Sitting with other diners on a restaurant terrace we soon forgot about Signorelli’s world and our own in favor of concentrating on the local Orvieto white wine and pasta at Vinosus Wine Bar near the Duomo. 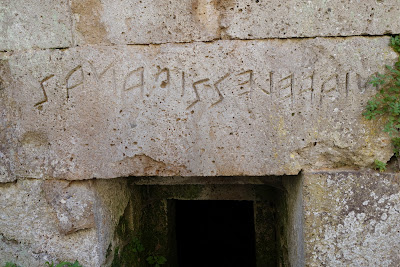 But we had one more sight involving death to see before we left – the small Etruscan cemetery, located beneath the towering hill. Granted, there are many other Etruscan necropoli, but this is the only one I know of where the families of the deceased have their names chiseled into the stone. Could they ever have imagined tourists would be tramping around trying to decipher names and looking into the dank and empty mausoleums long emptied of their contents by looters or archeologists?
When it was time for us to end the day’s exploration we returned the “long” way on quiet winding roads snaking through the countryside where vineyards soaked up the lowering sun. Below the hills, the valley of the Tiber with train tracks and the autostrada reminded us of the busy life of modern day Italy awaiting us when we returned to Rome.
When I arose at dawn the following morning a full moon was setting over the olive groves. Ah – Italy!