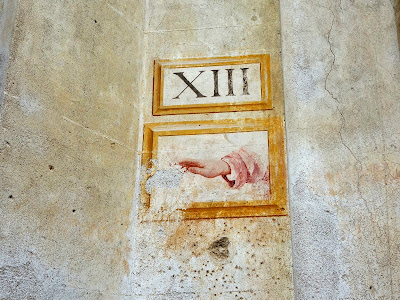 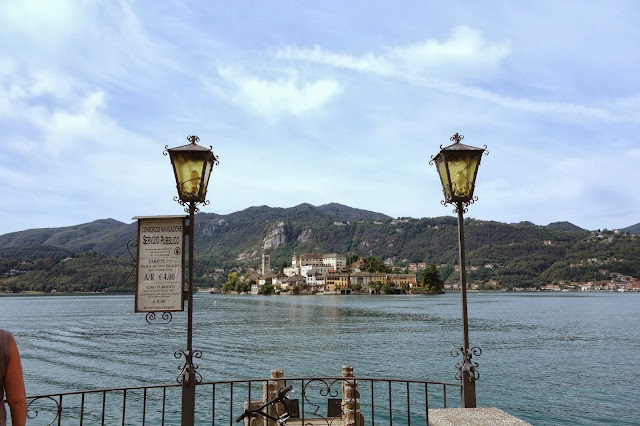 Mellow sunshine made the trees dressed in fall finery glow in the warmth of the day. We were off on a day trip from Milan through rolling forested hills to Orta San Giulio. The small town rests on the shore of Lago di Orta, one of the smallest of the lakes that decorate the northern part of Italy between the plain of the Po River and the Alps. This area has long been our romantic destination, both in actuality and in my mind.

Well, there is truth to the old saying that you can’t go home again. Instead of a few holiday makers strolling through galleries and boutiques there were busloads of people jamming the central plaza for a quick pasta and beer before climbing aboard for the next stop on their itinerary. The galleries and boutiques were shuttered, victims of the poor economy in Italy. Even more depressing, our long-time favorite hotel which dominated one side of the plaza, was a ruined hulk brooding over the lakeside and the determined visitors. 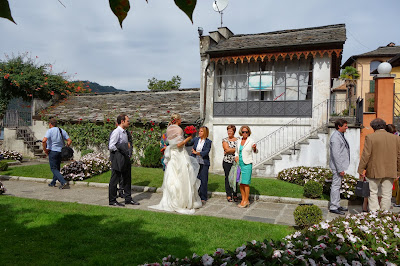 Fortunately, not all was lost. The church bells from the Benedictine nunnery on the small island not far off shore from the town still reverberated over the quiet water as always and a well-dressed crowd of locals was congratulating a pair of newlyweds in the municipal gardens.


The lacy wrought iron gates to villas were as beautiful as ever as were the villas themselves. 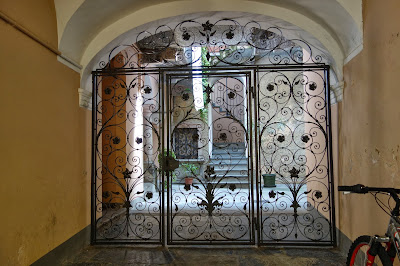 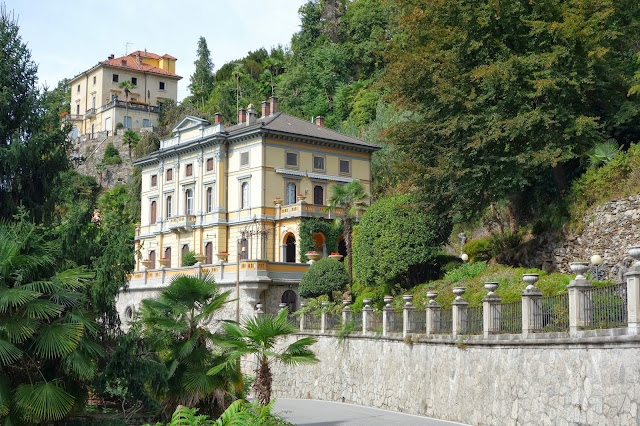 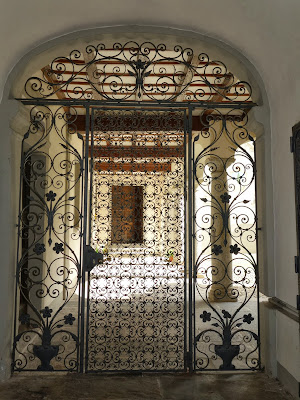 But as much as I love the little town with its Baroque church and cobbled streets, the most enchanting locale is the Sacred Mountain, a UNESCO World Heritage Site. Set on a hill overlooking the town, twenty small chapels, some dating from 1590, are set in quiet woods. 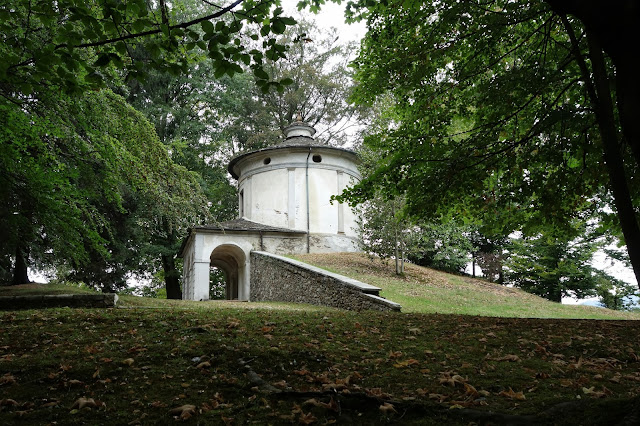 Each is filled with life-sized but dusty terracotta figures depicting scenes from the life of Saint Francis. 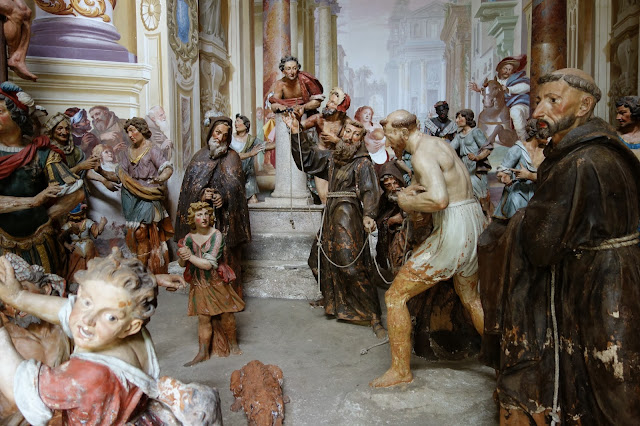 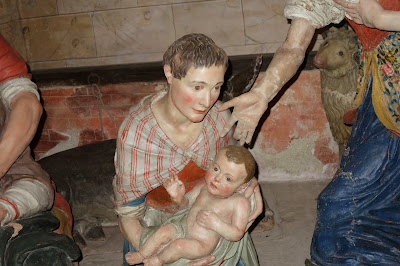 Demonstrating the continuity of the endeavor, the earliest chapels are in Renaissance style. As time passed, the succeeding building style changed to the theatrical Baroque, then Rocco, and finally Neo-classical in the last quarter of the 18th Century. Taken together they present a harmonious arrangement with the greensward, trees and vistas of the lake with its little island combining to encourage contemplation whether you are religious or not. 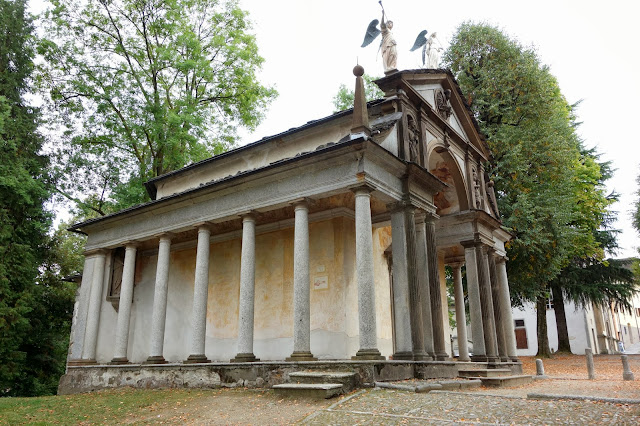 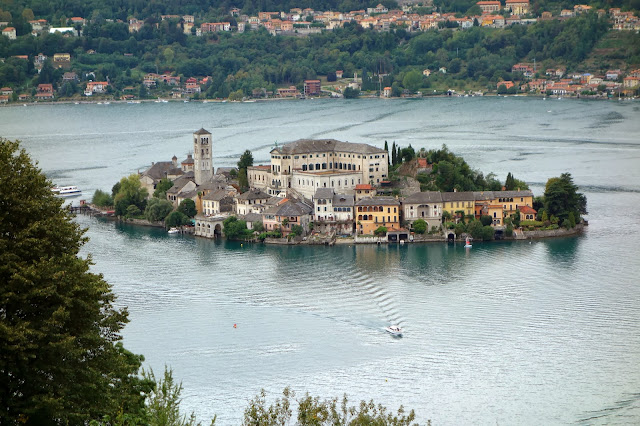 But it is the fresco on the exterior of every chapel that always attracts me: who can resist a a faded disembodied hand emerging from a cloud? Are they the hand of God admonishing the worshipper? 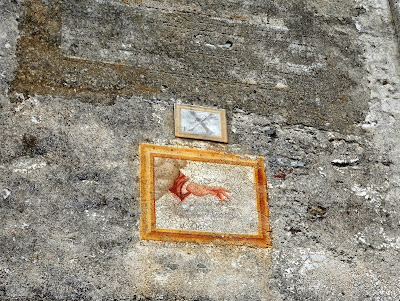 The hands seem to point tentatively, although with gentle grace. I like to picture local citizens lining up to have their hands assessed for sufficient character to serve as models. But who painted them, and when? 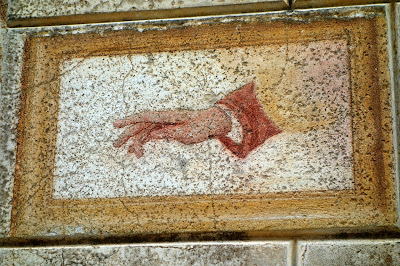 I know the hands are intended to lead the visitor to the next chapel, but the otherworldly nature of the frescoes also point the way to more of Italy with all its mysteries and curiosities that can never be fully comprehended. 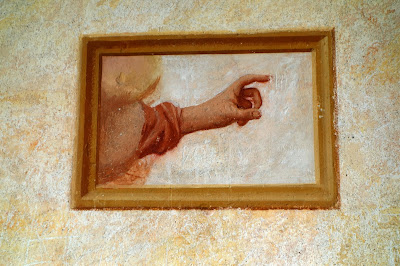