By
judithworks
on
Surely it is a breakfast suitable for the Greek gods who formerly inhabited this lovely part of Sicily: gelato in a fresh and soft brioche accompanied by ice coffee – cold, creamy, sweet and strong enough to keep me awake for at least 18 hours. 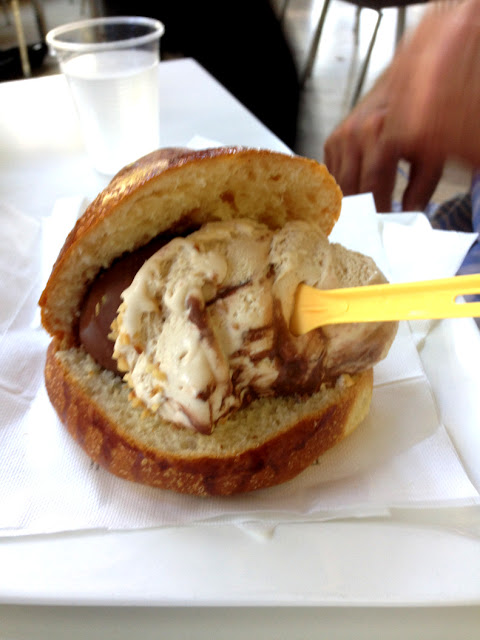 We sat outside a café on the waterfront near the Fountain of Arethusa along with the locals who were analyzing the latest political and soccer news. I was analyzing a guide to the part of Syracuse known as Ortigia. The Greeks founded their city here in 733 B.C. and it gradually grew to rival Athens before the Romans took over in 211 B.C.
The freshwater spring, which flows into a pond full of ducks and feathery papyrus, is named for a young woman named Arethusa. When a Greek river god fell in love and pursued her she plunged into the sea to escape. She reappeared in Ortigia where the goddess Artemis transformed her into the lovely spring – not a bad fate I thought. 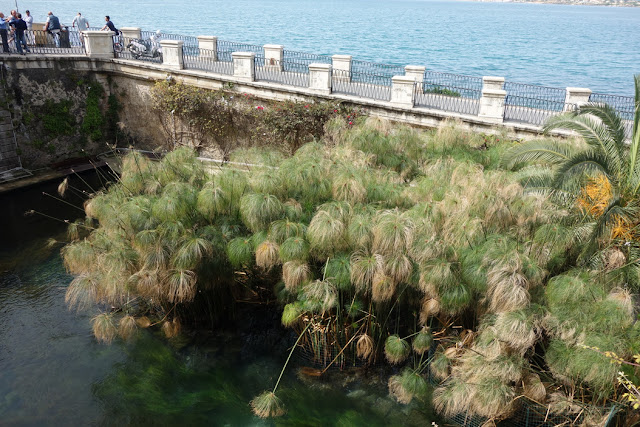 Needing to walk off our breakfast, we strolled toward the bridge linking the island to the main city to contemplate the ruins of the Temple of Apollo, built not long after the city’s founding, The architect’s name, Kleomenes, is still visible chiseled into the ancient stone. Could he ever have dreamed that he would be still remembered 3000 years later? 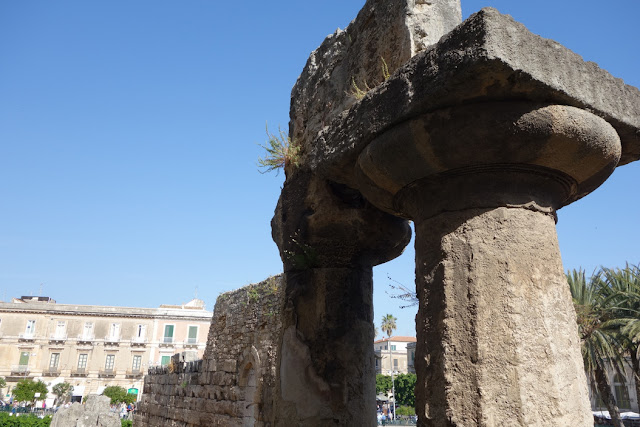 Daily life goes on no matter how many ruins surround the inhabitants, and there is no better way to see it than in the mouthwatering market. Oh the tomatoes, the tomatoes! 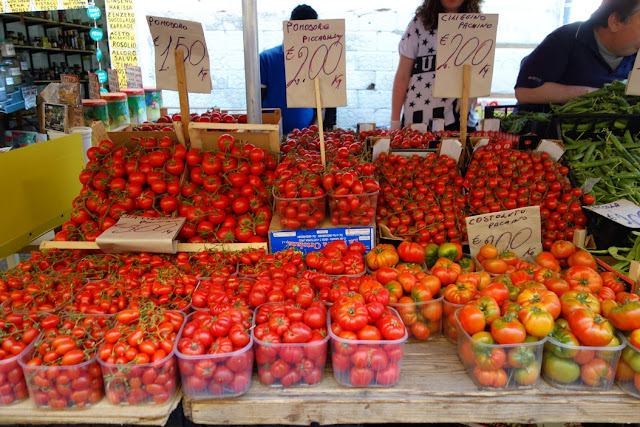 Of course we were hungry afterward. I ordered a salad with the tomatoes mixed with oranges. green and black olives, red onions and topped with a sprig of basil. Divine. 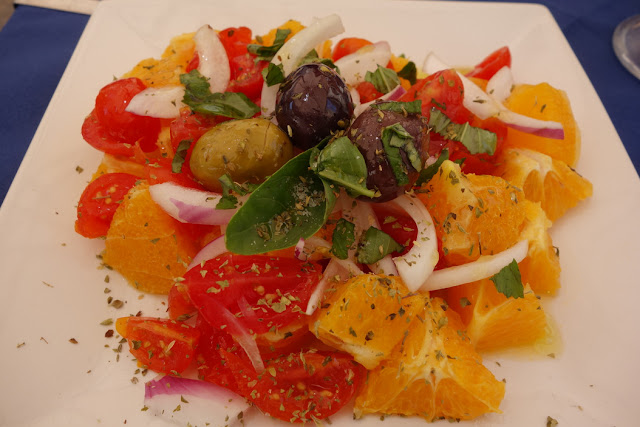 Then a stroll along the seaside to the Castle Maniace built in 1212 by Frederick II to protect the harbor. 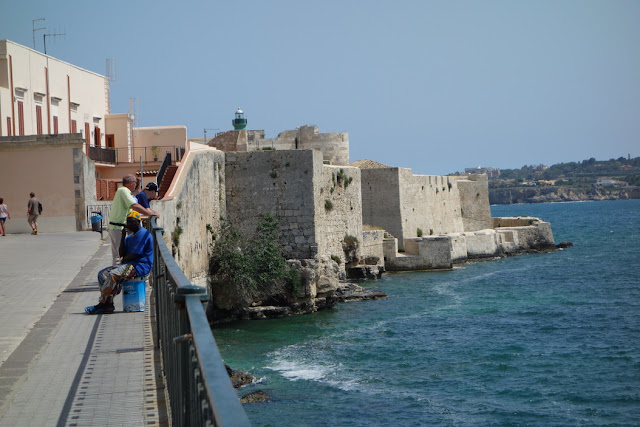 Fortunately we had two more days to explore the area so we finally subsided at a sidewalk café across from our hotel, the Antico Roma, to watch the evening passeggiata with lovers embracing, tourists with guidebooks, exuberant children, and elderly couples walking arm in arm to enjoy the warm evening. And a future Formula One driver! 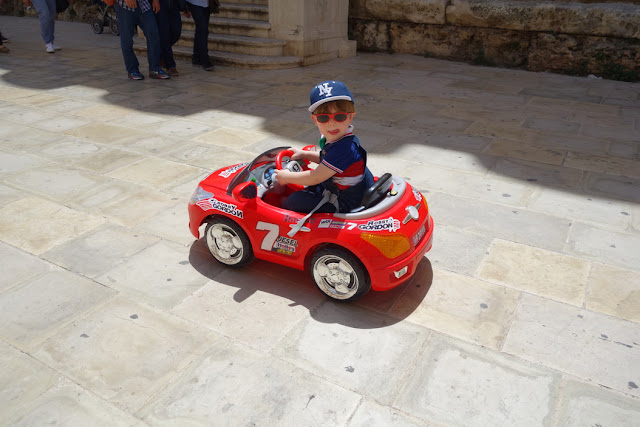 The marvelous Duomo was our first goal the following day. The Baroque façade faces the Piazza Duomo which is ringed with golden- colored Baroque buildings including the Town Hall and the Archbishop’s Palace. 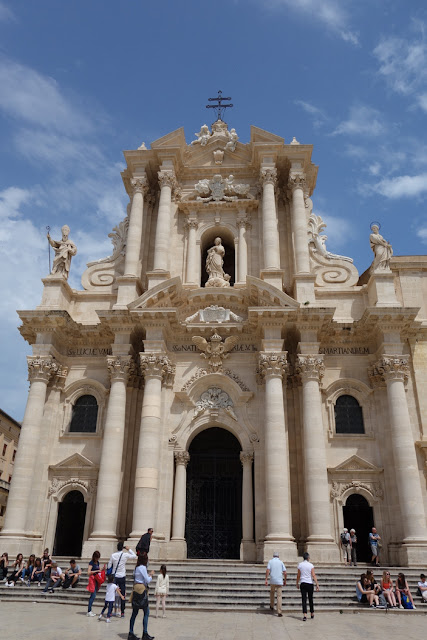 At the far end of the piazza is the church of Santa Lucia alla Badia now housing a Caravaggio painting titled The Burial of St. Lucy. Unfortunately the painting is very dark and set so far back from the viewer that it was difficult to see. 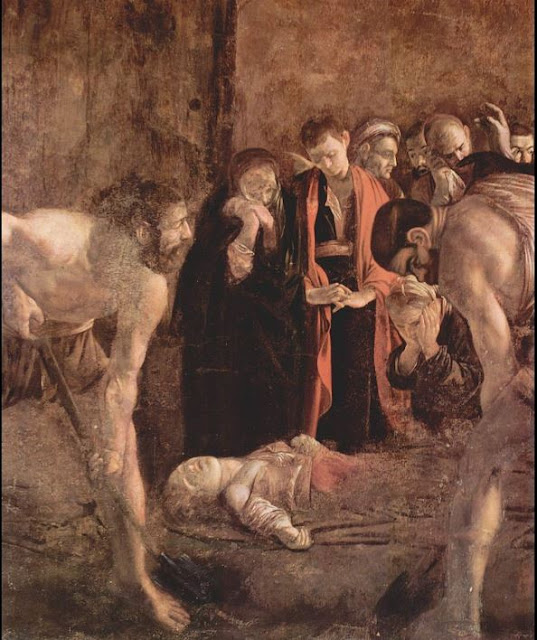 The Duomo’s foundation was begun in 480 B.C. when a tyrant of Syracuse, Gelon, was victorious in a war with another Greek city. In celebration he decided to build a temple to Athena which was filled with ivory, gold, white Parian marble from the island of Paros and considered the best in the ancient world. The Doric temple was famous throughout the Mediterranean world and sailors were guided by the sun reflecting on Athena’s shield above the entrance. The riches were looted by the Romans and have long-since disappeared but 24 of the original 36 columns are still standing. 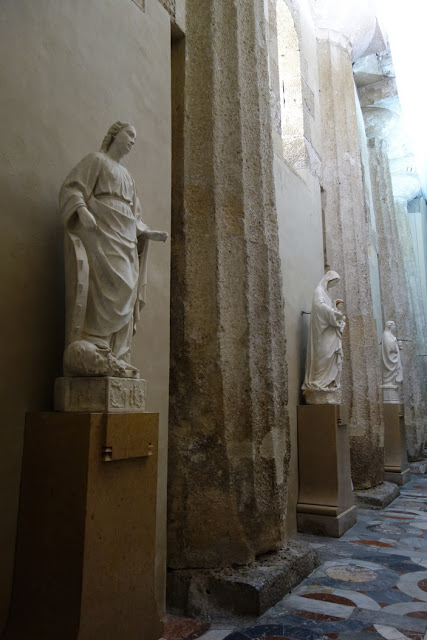 First converted to a church by the Byzantines, changed to a mosque during the Arab times, the Normans made alterations and the Spanish added a ceiling of chestnut wood. It was rebuilt in its current form after 1693 when it began to crumble due to earthquakes.
We lingered in two chapels in the Duomo. One is dedicated to St Lucy who was martyred in 304 and supposedly had her eyes gouged out. The very odd Baroque marble plaque shows her eyes on a stand with a sword symbolizing the manner of her death. No surprise to find out she is the patron saint of the blind, those with eye infections, and aptly, us long-suffering writers. (And I thought the sword looked like a pen.) 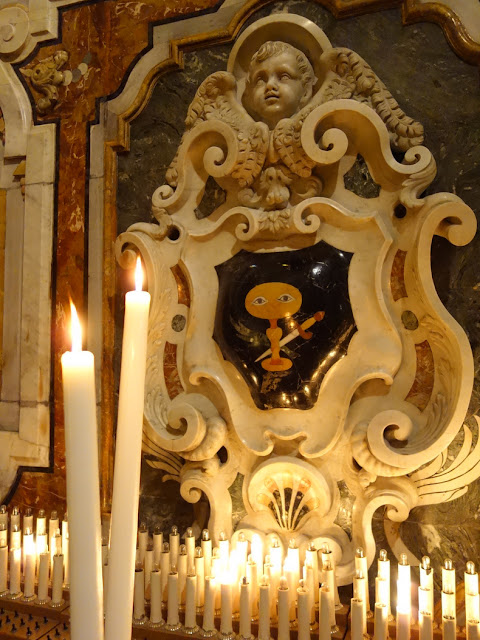 The Cappella del Crocifisso with a splendid painting of the founder of the church, St. Zosimus, attributed to Antonello da Messina. 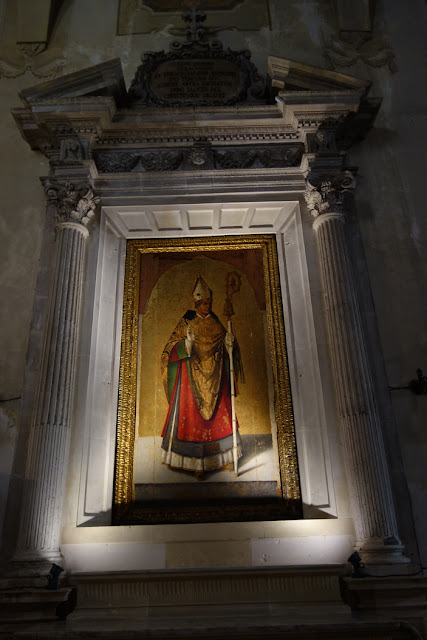 Below is a reliquary with many of the saint’s bones. I always wonder how the bones so frequently displayed in churches were obtained, and if they really belong to the person venerated. 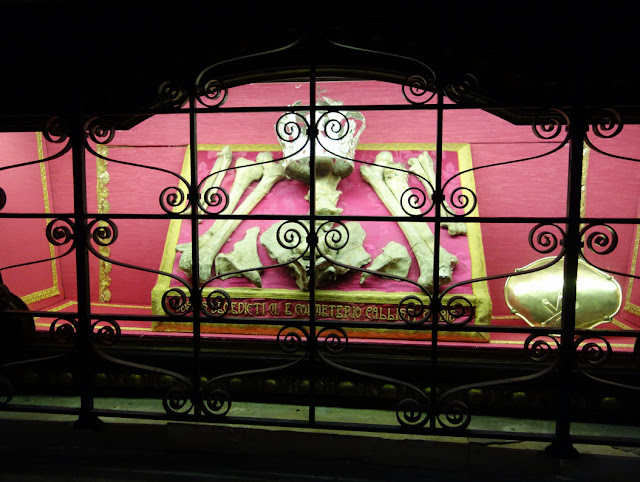 In the evening it was time for a change from the sacred to the profane – a traditional puppet show with knights, Moors, and our heroine, Angelica. The theater had a small museum and a workshop where disembodied heads and other body parts hung from the ceiling. 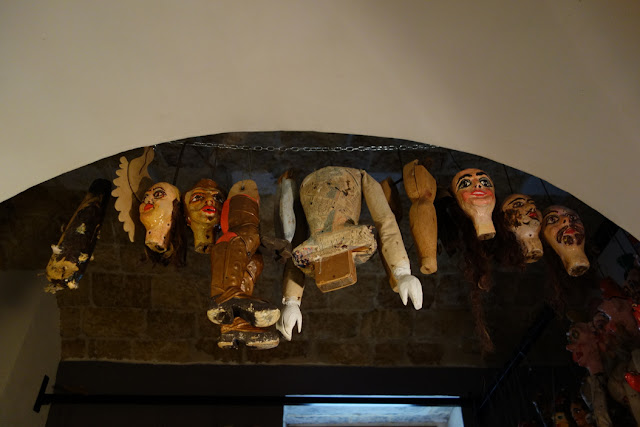 Rather disconcerting until we saw the amusing puppet of a horse pulling a traditional Sicilian cart – the horse has both right legs off the ground, quite a balancing trick. 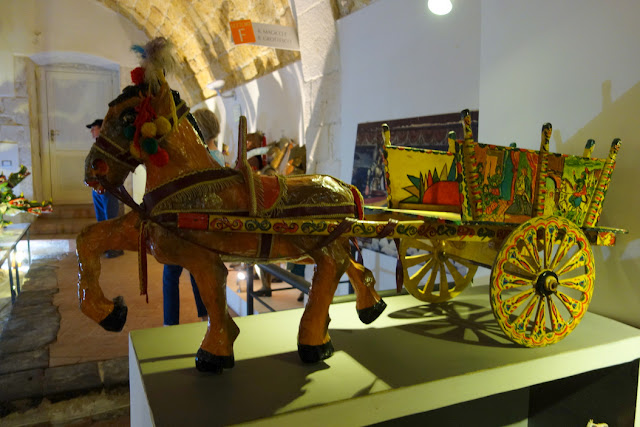 When the performance was over and all ended happily it was time for an evening prosecco and a discussion of which bar we should try for our morning coffee and gelato. More chocolate or something more daring like pistachio?

All photos except The Burial of St. Lucy and the gelato copyright Judith Works. Photo of Burial of St Lucy is from Wikipedia Commons. Photo of gelato is courtesy Margaret Jessop.