By
judithworks
on
We were enveloped in a soft silky rain as if we were in a Japanese watercolor. The moisture lent a dull sheen to the blue tile roofs and the stone lanterns along the roadside leading to the Peace Museum. 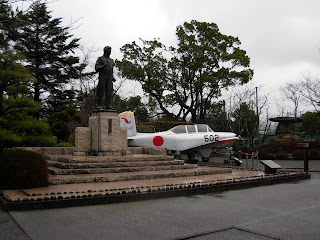 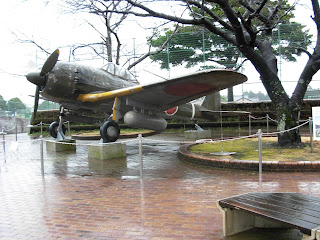 We were out for a day in Chiran, about an hour away from Kagoshima a city located on a narrow bay of the same name on Japan’s southernmost major island, Kyushu. The countryside with small towns and farms was peaceful but our first stop, the interestingly named Peace Museum, was a shock. It was dedicated to peace in the form of a lesson about the period during World War II when the Japanese kamikaze planes relentlessly attacked American ships near Okinawa in a futile effort to stop the US advance into the Japanese Homeland.

The entrance path led us past restored war planes and a large bronze bell to be rung when making prayers for peace.

The museum was crowded with Japanese of all ages. We, a small group of Americans, were hosted by a historian who gave a background lecture and then led us around the display cases while describing the uniforms and the faded letters the pilots wrote to their mothers and sweethearts before they climbed into the cockpits of planes so small that they could only carry a bomb under one wing and a fuel tank under the other. The walls were lined with photos of these handsome young men who flew the planes knowing full well that they would never come home because even if they weren’t shot down they only had enough fuel for a one-way trip. Echoing through the hall was the sound of battle: a video showing an endless loop of planes diving into US ships, horrific explosions, and the planes that didn’t crash into ships in nose dives as they plumetted into the sea. A restored Mitsubishi Zero, dredged out of the sea, occupied a separate room. Rather than peace it seemed that desperation was the most descriptive word to describe the museum. What did the Japanese who filled the halls think? We couldn’t find out but wondered if the elderly wished they had won and if the younger generation cared at all. 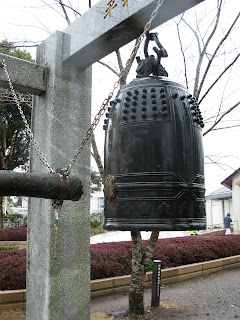 As we departed we rang the bell in the faint hope for world peace. Our narrator told us that the stone lanterns we had admired on the drive were commemorations – one for each of the 1036 pilots from the nearby airfield who died. 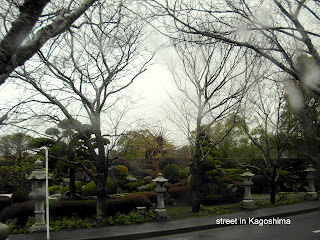 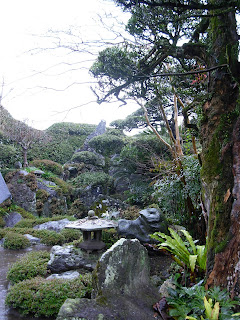 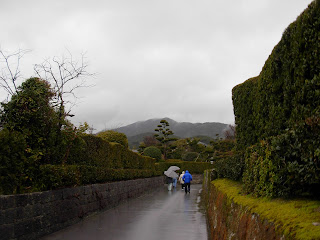 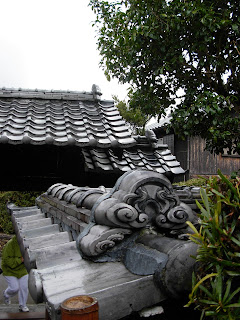 Nearby was a lane with seven samurai homes and gardens – the view of Japan that enchants rather than provokes thoughts of the more recent past. The samurai, too, were warriors – upper class swords for hire who lived and fought for their feudal lords. But they had a timeless artistic vision expressing serenity. The tile-roofed houses, all about 250 years old, are set back from a lane and surrounded by clipped hedges and trees. Rock gardens invite contemplation. Some of the hedges are made of camellia bushes, pink flowers peeking through the foliage. Other visitors with their umbrellas strolled toward the last house where a small tea room awaited us. The hostesses in kimonos poured the bitter fragrant beverage into tiny porcelain cups. We rested on a stone bench outside the walls of shoji screens to look over the tiles and up the lane thinking of a Japan long ago and how bitter enemies can become friends. 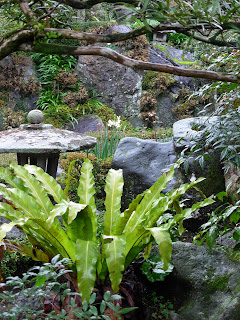 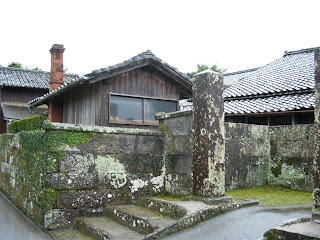