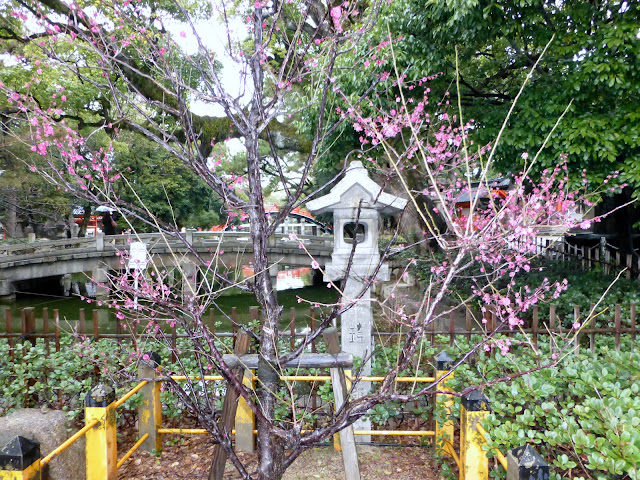 When I heard that it was an auspicious day for baptisms and weddings it seemed a good time to head for Osaka’s Sumiyoshi Taisha Shinto shrine despite the grey clouds and spring showers. The shrine, which contains a temple designated as one of Japan’s national treasures, is dedicated to various interesting and helpful deities, called kami, who ensure safe travel, good fortune in marriage, safe childbirth, business prosperity, family welfare, military valor and beauty. Because of its association with marriage and family it is an especially favored spot for traditional weddings. 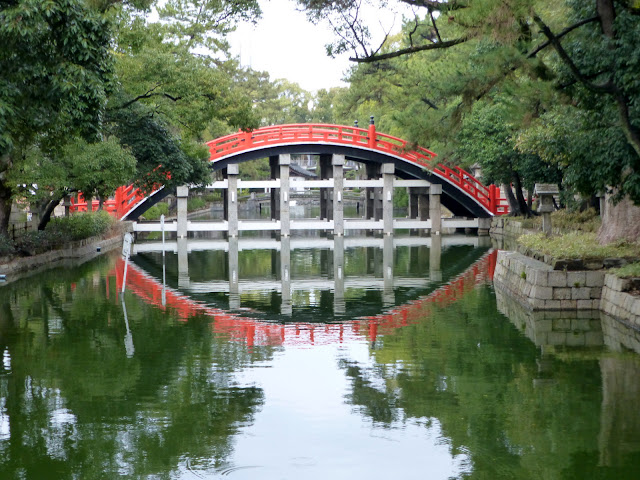 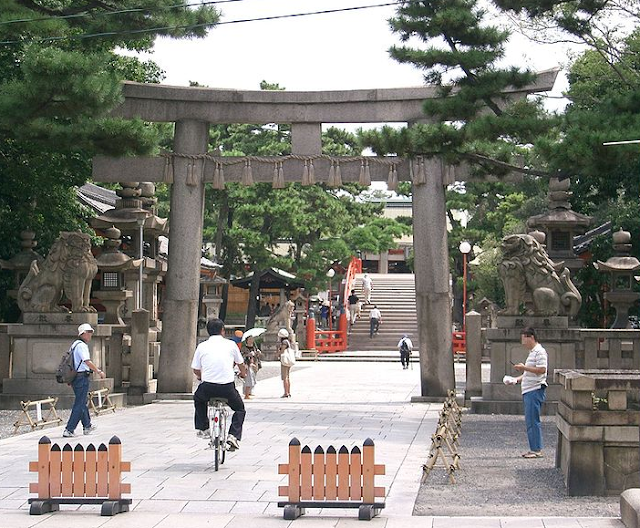 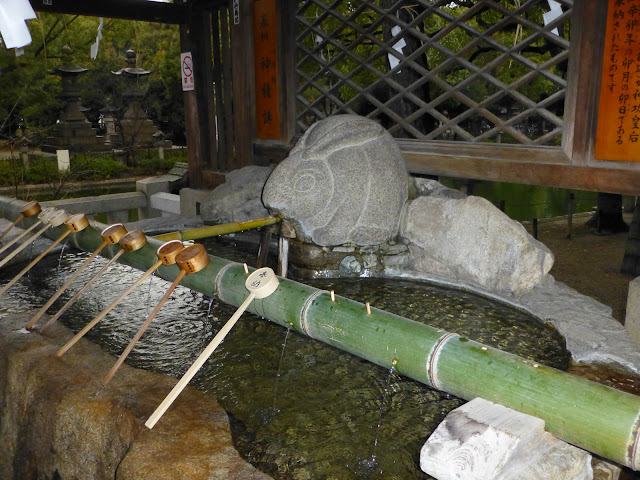 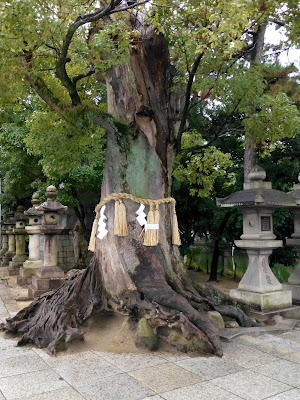 To enter the complex the visitor or worshipper passes by stone lanterns, through a tori gate marking the boundary between the everyday world and the infinite, and crosses the steep vermilion-painted Taiko-bashi bridge arching over a pond. The first stop is at the temizuya to wash hands and face for purification using a bamboo dipper for water collected in a basin supplied by a stone rabbit. Just outside the second tori gate ancient cypress trees are hung with shimenwa,ropes made of rice straw decorated with white paper streamers marking sacred areas. 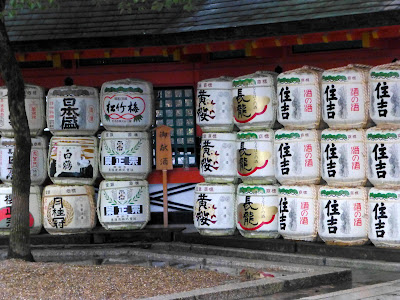 I strolled the gravel-paved grounds peering into various shrines; inspected the colorful sake barrels donated to the temple for ceremonial use; watched youngsters practicing  drumming for an upcoming festival;  looked for pebbles within a fenced area to see if I could found one marked with “five,” “big,” or “power” for personal charms (I didn’t); and made a quick prayer to the symbols of business fortune – a row of cats. 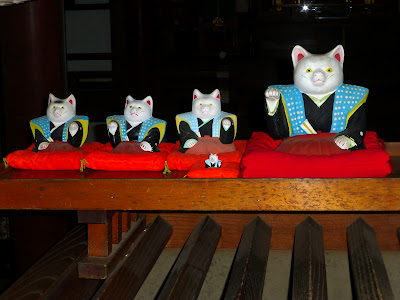 The ancient couple guarding them pantomimed the correct prayer posture: Proceed to the altar, stand straight; bow deeply twice; put palms together; clap hands twice; pray for my wish to come true; lower hands and bow once more. (No results yet I’m sorry to say). 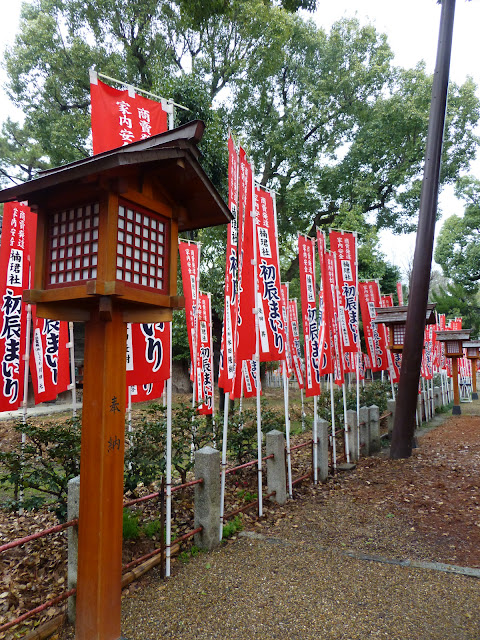 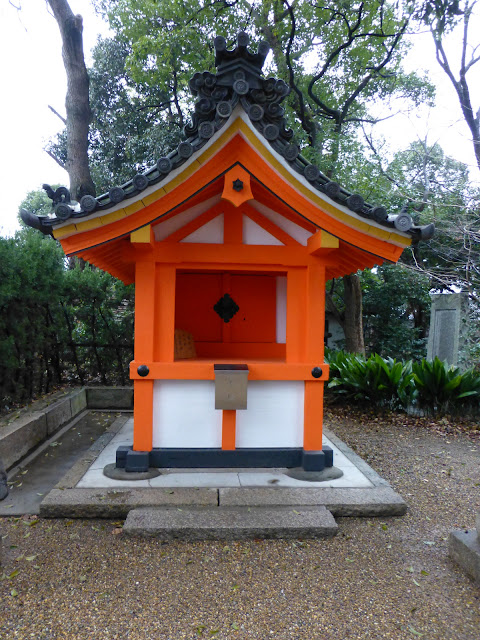 Finished praying and making my donation I continued to walk among the small orange and vermilion shrines until I came to a temple where a group of women were standing in front of the open entrance watching a wedding. Many of the onlookers wore kimonos and held traditional umbrellas to ward off the intermittent showers. I joined the group. 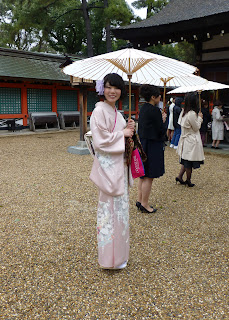 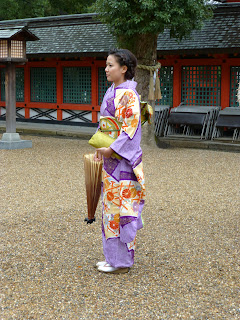 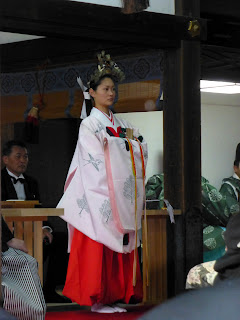 I could hear the sound of a drum and flutes playing what sounded to me mournful and tuneless music while two priestesses with headresses of pine and what looked like cranes moved in a slow ritual dance accompanied by  musicians in green robes. The white-robed, black-hatted priest intoned words of a marriage rite. The bride and groom had their backs to us of course but through an open side door I could see a few family members sitting on the benches on each side watching the formalities. 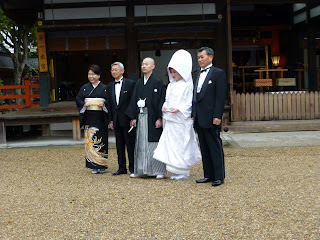 After the union was solemnized in what seemed to be a stately and timeless ceremony the couple and their family moved to the courtyard for photos and congratulations. The beautiful bride was swathed in a white satin kimono with a hood while the groom wore a tuxedo. Two of the other men were elegant in formal samurai dress complete with fans. It was a picturesque combination of ancient and modern. 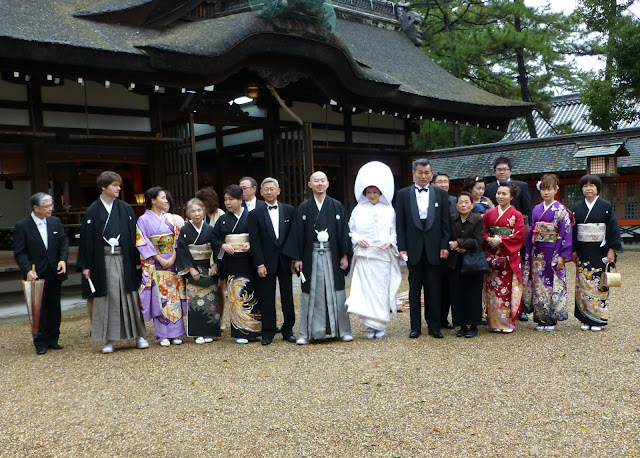 I joined with the well-wishers to hope that it was indeed an auspicious day for the couple as it had been when I, too, was married at a spring ceremony in another time and place.