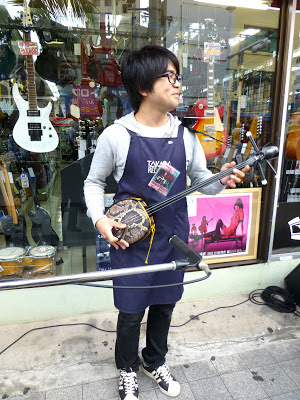 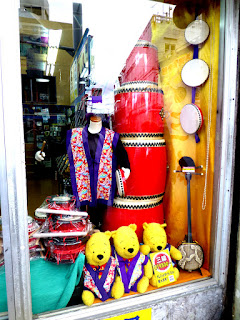 The kid was twanging what looked like a three-stringed banjo covered with snake skin. Behind him the windows of the music store were filled with taiko drums of various sizes. Definitely not Bluegrass Country or Bourbon Street even though the music had some similar sounds. Instead, it was Kokusai-dori on a Sunday afternoon in Naha, Okinawa, capital of the southernmost of Japan’s prefectures, the Ryukyu archipelago. The “banjo” is actually a sanshin and the music is called shima uta, an Okinawan roots-style now popular throughout Asia and on Youtube. Restaurants and bars advertised live music – tempting but first I wanted to look at Okinawan crafts and foods.
Sunday is definitely not a day of rest in Naha. The main shopping street in the city center, turned into a mile-long pedestrian zone for the day, was hopping with shoppers from Taiwan, China, or from more northerly parts of Japan seeking a sub-tropical holiday. 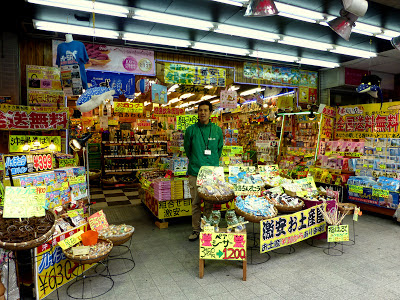 The street was lined with fast food restaurants, liquor stores, ATMs, cheap jewelry and clothing; the usual commercial items found in other Japanese cities, although with a more warm-weather aspect in light of the climate that is more like Hawaii or Southern California. 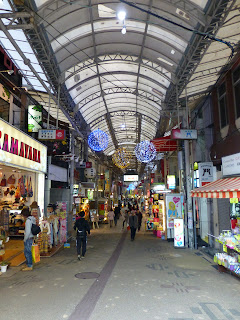 My goal was off the main street: the Heiwa-dori Shopping Arcade and Makishi Public Market founded by war widows after the hideous Battle of Okinawa where after 82 days 13,000 American soldiers and 250,000 Japanese soldiers and civilians lost their lives in the carnage.

The arcade was filled with shops, each one worthy of a long look: beautifully packaged tropical fruit, designer home styles, and clothing made from the wonderful textile designs unique to the island – rather like Hawaiian but with smaller repetitive patterns. 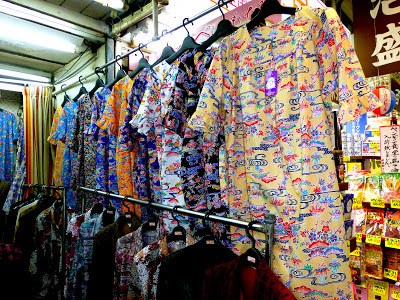 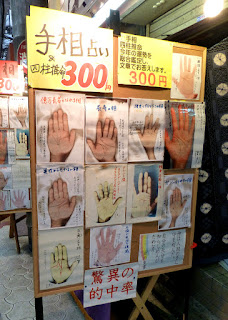 Should I buy some of the strong Awamori liquor made with long-grain rice and a black mold? Or have my palm read – it was cheap, only 300 yen? But I was too doubtful about the drink and can’t understand Japanese so I passed into the food market, a cornucopia of unfamiliar seafood and produce (except for the stacks of SPAM labeled in Japanese). 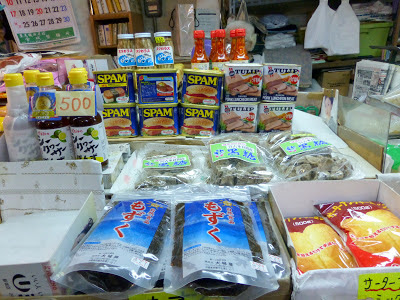 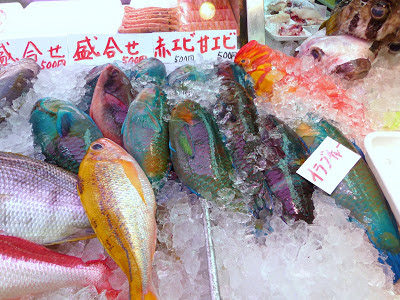 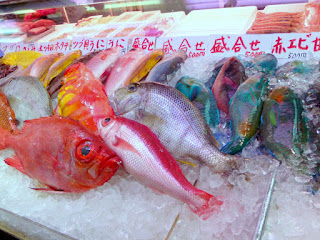 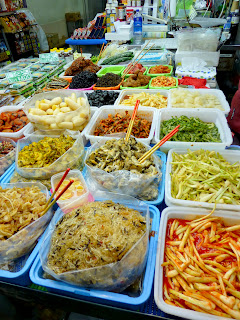 The fish displays looked like rainbows as they rested on ice near prawns ready for Sunday dinner. Different than the steel-gray fish from my familiar cold North Pacific waters, they were so beautiful they belonged in an aquarium rather than a pot on the stove or on a grill. Large tanks held bright-red lobster and crab; prawns rested on ice near the fish; containers of small dried fish along with other pickled and dried unknown items filled several stalls.  The meat counters were showing various cuts of pork, the most common meat eaten on the island. One whole shop was devoted to what looked like hard brown bananas. When I asked what they were the vendor held one up and grated flakes into a bowl. She said they were flakes of bonito tuna compressed into a size and shape easy to hold when preparing them as seasoning for a bowl of noodles and broth.

The produce section was full of bitter melon, cabbage, taro, onions, sweet potatoes, tofu, noodles, and dried seaweed along with pineapple, papayas, mangoes, passion fruit, guavas and citrus all waiting to become the local cuisine – a mix of Chinese, Japanese and Southeast Asian in keeping with Okinawa’s history of a cultural crossroads. 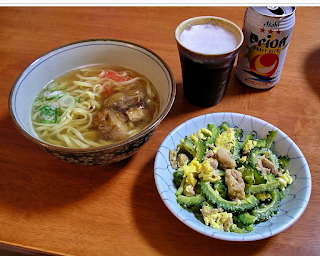 By this time it was clear that all this food made me hungry. It was time for a Sunday feast. Now where was that restaurant with the music? The one with Orion beer, bowls of soba noodles and champuru – bitter gourd stir-fried with pork and egg. Yes!